In the previous blog post on IntelliJ Rust, we described the plugin’s major update of the 2020.3 release cycle – more support and a new UI for Cargo features. In brief, you can now toggle workspace features right in the Cargo.toml file, and code insight across the whole of your project will be adjusted accordingly. 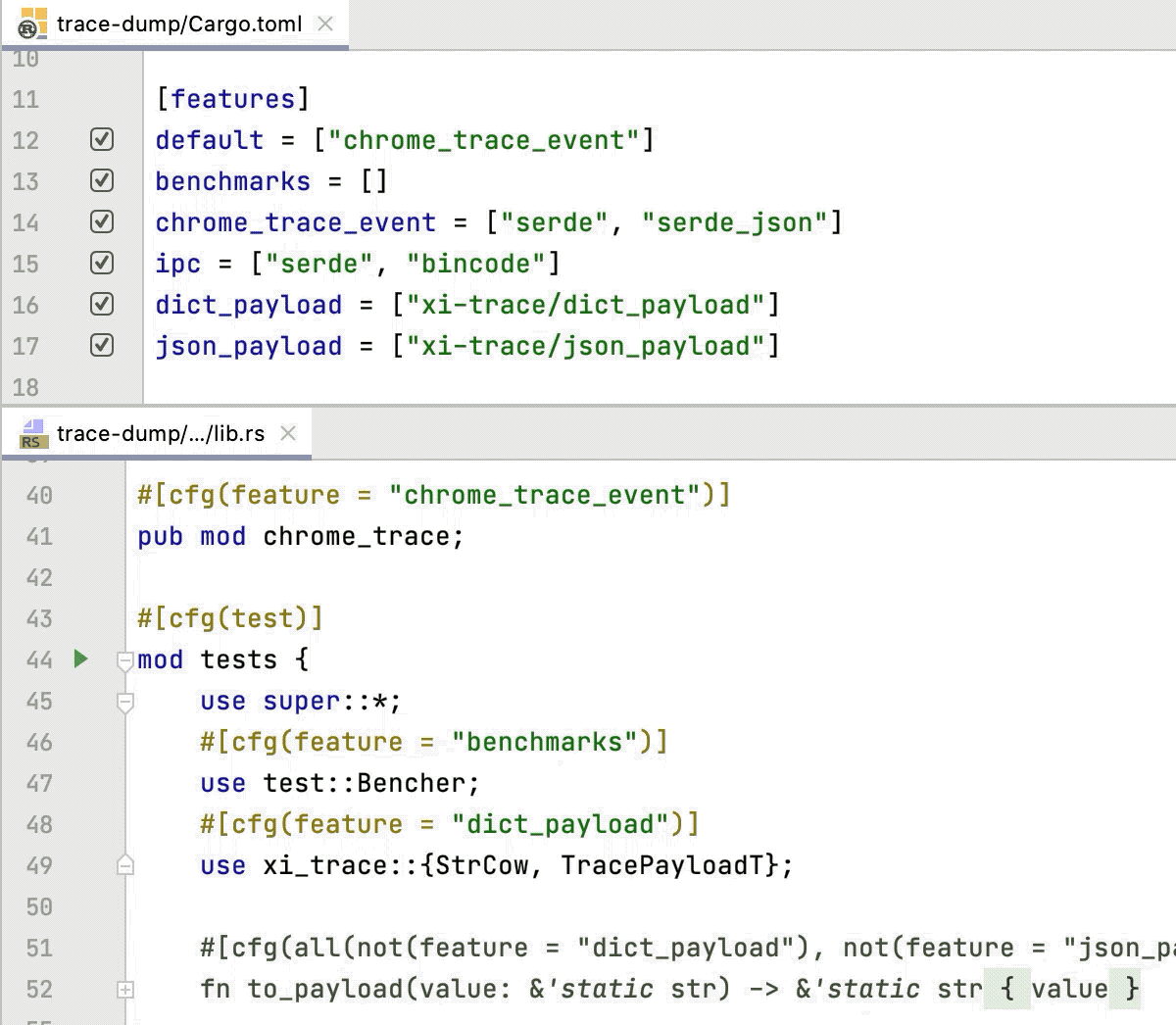 Now let’s take a look at the improvements that have been made to this functionality already, along with other updates the plugin has received over the last few months:

IntelliJ Rust now gives completion suggestions and provides navigation across features in Cargo.toml. You can also jump to a feature declaration from a cfg or cfg_attr attribute in your Rust code: 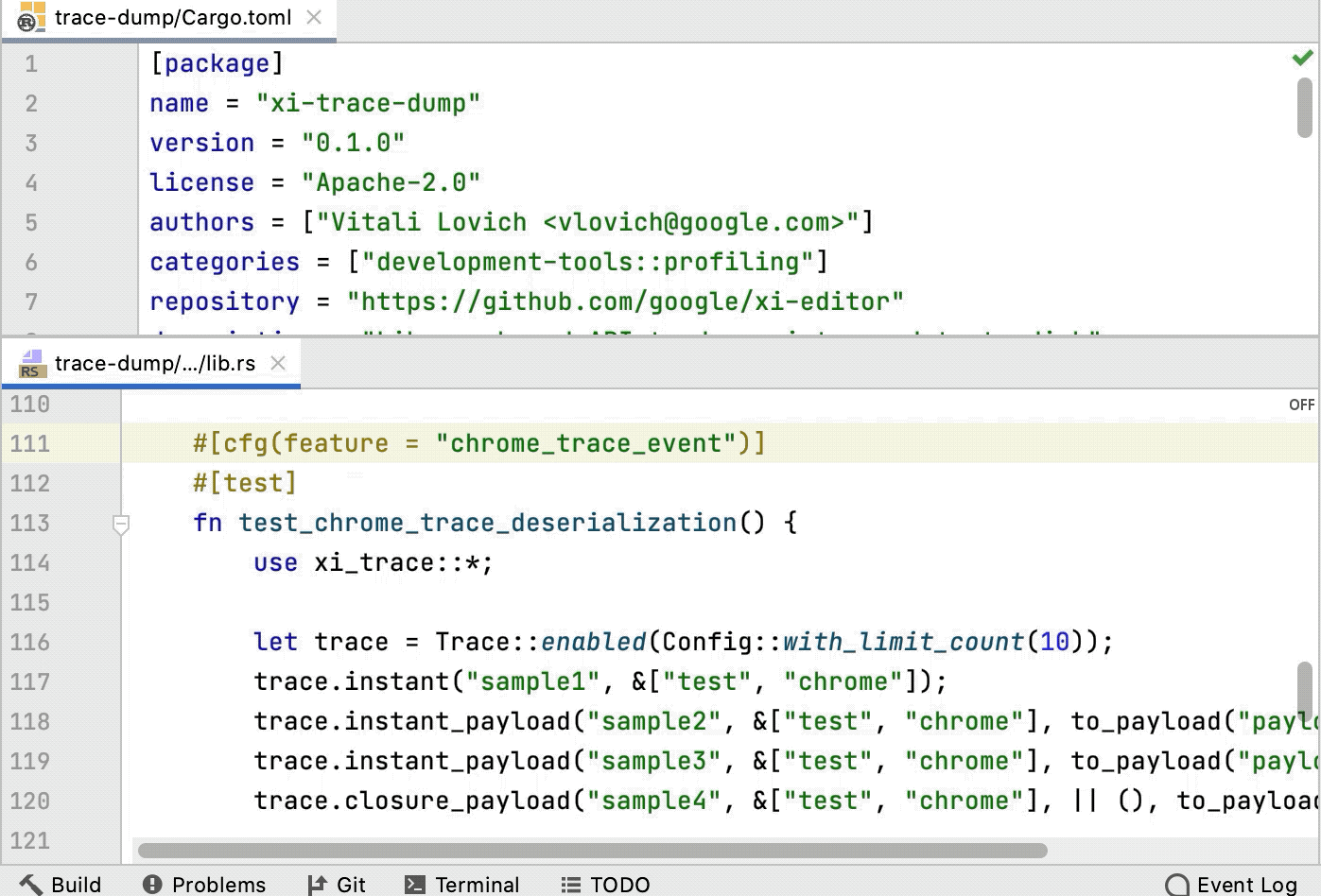 If you would prefer Rustfmt to be the default formatter for your code, tick the Use rustfmt instead of built-in formatter checkbox in Settings / Preferences | Languages & Frameworks | Rust | Rustfmt.

Currently, this option doesn’t apply when reformatting a selection. If you select a region and call Reformat Code (Ctrl+Alt+L on Linux/Windows, ⌥⌘L on macOS), the IDE’s formatter will be used instead.

Our new algorithm uses the fixed-point iteration approach and aims to provide better support for complex glob imports (use foo::*) and re-exports (use foo as bar). It will also allow the plugin to properly expand the upcoming macros 2.0.

At the same time, the new algorithm addresses some of the existing macro-related issues. For example, it improves resolve for the code where a macro expands into another macro’s definition. It also fixes the problem with macro expansion inside an included file.

The following code fragment gives an example of how the new engine handles complex resolve:

Note that the new algorithm works for top-level items only, so local variables and type inference functionality won’t be affected.

If you are interested in the implementation details of the new algorithm, you can find a longer explanation in this ticket.

This feature is in its early stages of development, so we encourage you to try it out and let us know if you have any issues. Please use the plugin’s issue tracker: just select a problematic piece of code and call Help | Create New Issue.

The plugin’s wizard for creating new projects has been enhanced with two more templates, WebAssembly Lib and Procedural Macro, and the option to add other Git repositories as templates to be used with cargo-generate. 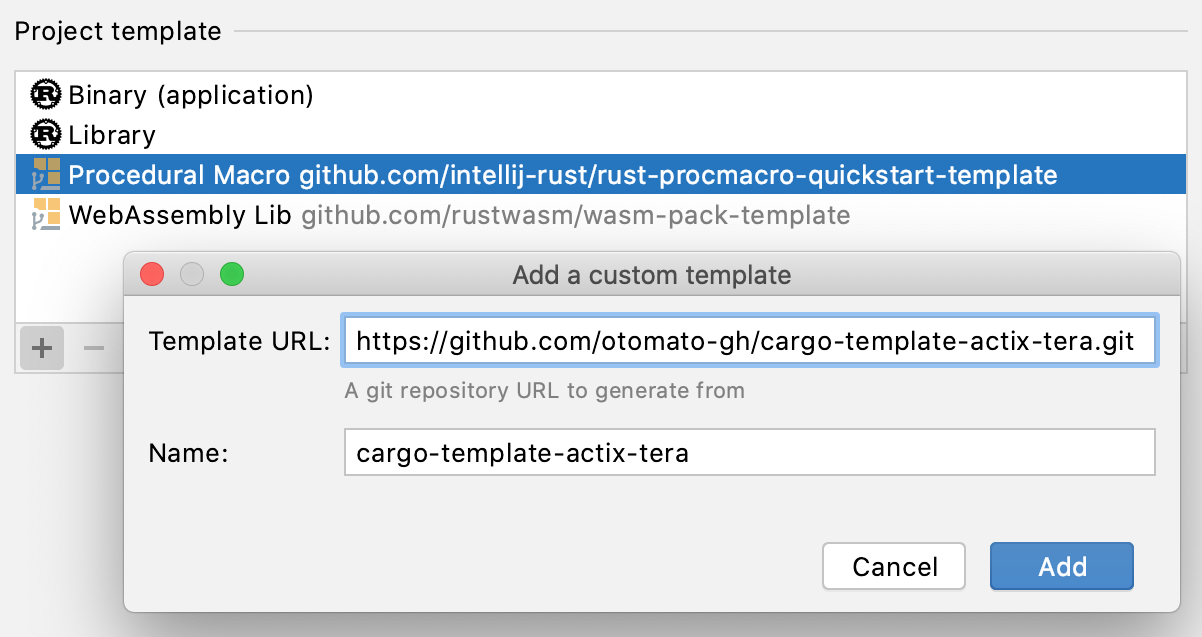 If you don’t have cargo-generate installed, you will be able to do that from the New Project dialog.

Are you working with Rust and WebAssembly together? We recently started working on WASM support, and here are the features that are already available:

If you are interested in tracking the progress of WASM support, please follow this issue. Also, please let us know if there are any other IDE features for Rust and WebAssembly that you would like the plugin to have.

Other notable updates include completion for rustc and clippy lint attributes, and new intentions for creating a function/method from an unresolved call and for importing a qualified path.

Also, debugging for your Rust code in IntelliJ IDEA Ultimate is now available on Windows with LLDB under the MSVC toolchain. Just a quick reminder: you need the Native Debugging Support plugin for this (the IDE will prompt you to install it). There are some limitations for Rust support in MSVC LLDB though, see this issue for details.

We would like to take this opportunity to thank the external contributors who have helped us in this release cycle. Many features and fixes wouldn’t have made it to the plugin without your efforts! Our thanks go to: