We are happy to announce that CLion 2021.3 is now available!

To update to the new version, you can use the Toolbox App, a snap package (on Ubuntu), download the installer from our website, or apply the patch update to upgrade from version 2021.2. 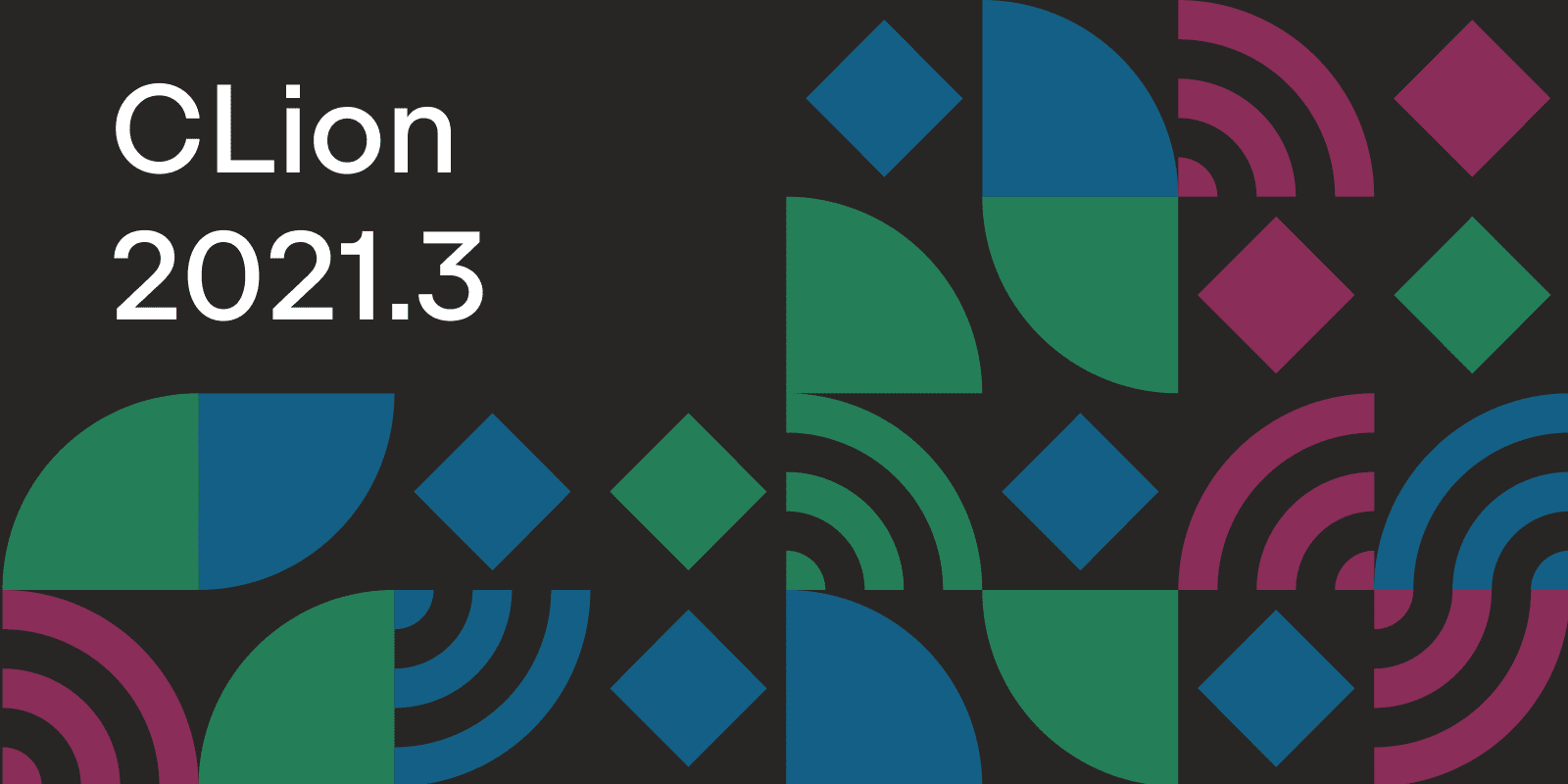 Check out the highlights and read the post for more details:

Until now, remote development in CLion was focused on running the project build on a remote host, using remote host compilers and CMake/make, debugging with remote host debuggers, and running the application on the remote target. In this setup, CLion itself runs locally, and your source files are also stored on the local client, with automatic synchronization to the remote host.

However, there are several drawbacks to this approach:

Our users have shared these concerns with us before – CPP-15986, along with a similar problem for the whole IntelliJ platform – IDEA-226455.

We now have exciting news to share –
CLion now comes with long-awaited support for the new remote development workflow!

The main idea is to use a powerful remote machine to execute all IDE operations and to build, run, and debug code – all while running the IDE on a thin local client. A remote host is a physical or virtual machine hosting the source code and running the headless CLion to perform most of the IDE functions. Developers connect to the server with a thin local client (i.e. a physical machine, like a laptop) and use this thin client for development. We hope this setup helps you stay more productive and flexible while allowing you to work securely from anywhere.

You can find the documentation, Getting Started guide, and FAQ in our webhelp. In the following sections, we explain JetBrains Gateway as well as a few known limitations on the new remote development workflow in CLion.

JetBrains Gateway is our new application that serves as an entry point for all your remote backends. It runs on a Client and can be thought of as a lightweight launcher. It connects a remote server to your local machine, downloads necessary components on the backend, and opens your project in the JetBrains Client. It doesn’t require you to have an IDE installed on your local machine. You can grab the latest version of JetBrains Gateway from the Toolbox app or on the JetBrains website. 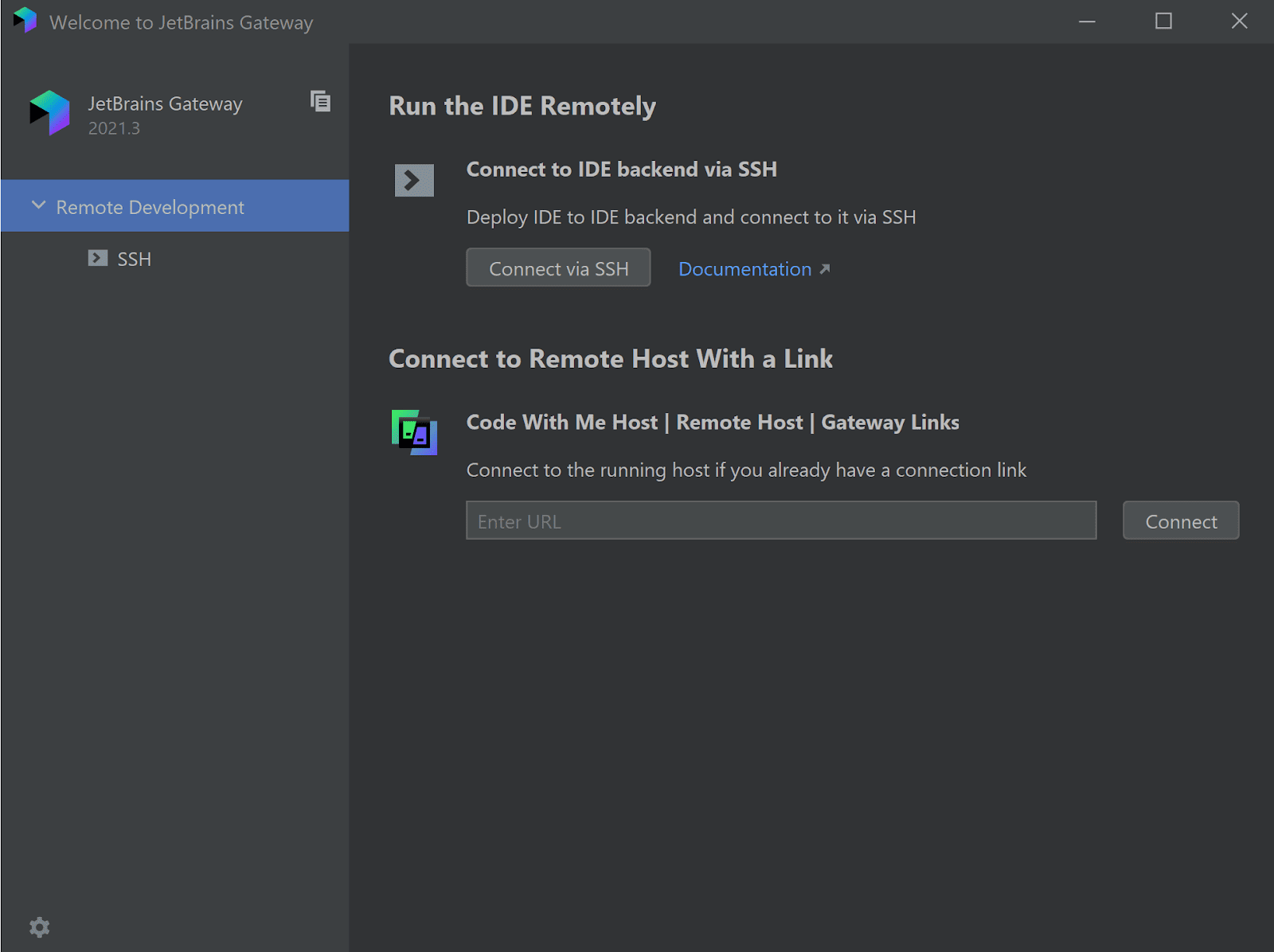 Use JetBrains Gateway as a stand-alone launcher or as an entry point from CLion to connect to a remote server. Check out this Getting Started guide.

It’s important to note that as of right now you are not able to initiate remote development sessions from CLion, but you can do so through JetBrains Gateway.

The remote hosts in this new remote development workflow are still Linux-only for now. Be sure that you have a compatible SSH server on the Linux platform. The Linux platform should have any recent Linux distribution such as Ubuntu 16.04+, RHEL/Centos 7+, and so on.

In the new remote development workflow in CLion, code editing, code analysis, navigation, running/building/debugging your code, and unit tests generally work. There are a few CLion-specific things to note here:

Please note that this is a beta version of the new remote development functionality and we’re still actively working to improve it. Please give it a try and let us know what you think. You can share your feedback or report any bugs here.

When debugging, you really want to stay focused on important things. In this release, we customized the way the debugger renders data. The new settings are available in the context menu in the debugger tool window or in Settings/Preferences | Build, Execution, Deployment | Debugger | Data Views | C/C++ (or just Data Views, if all other language debuggers are disabled in CLion). You can now strip the information you are not interested in. 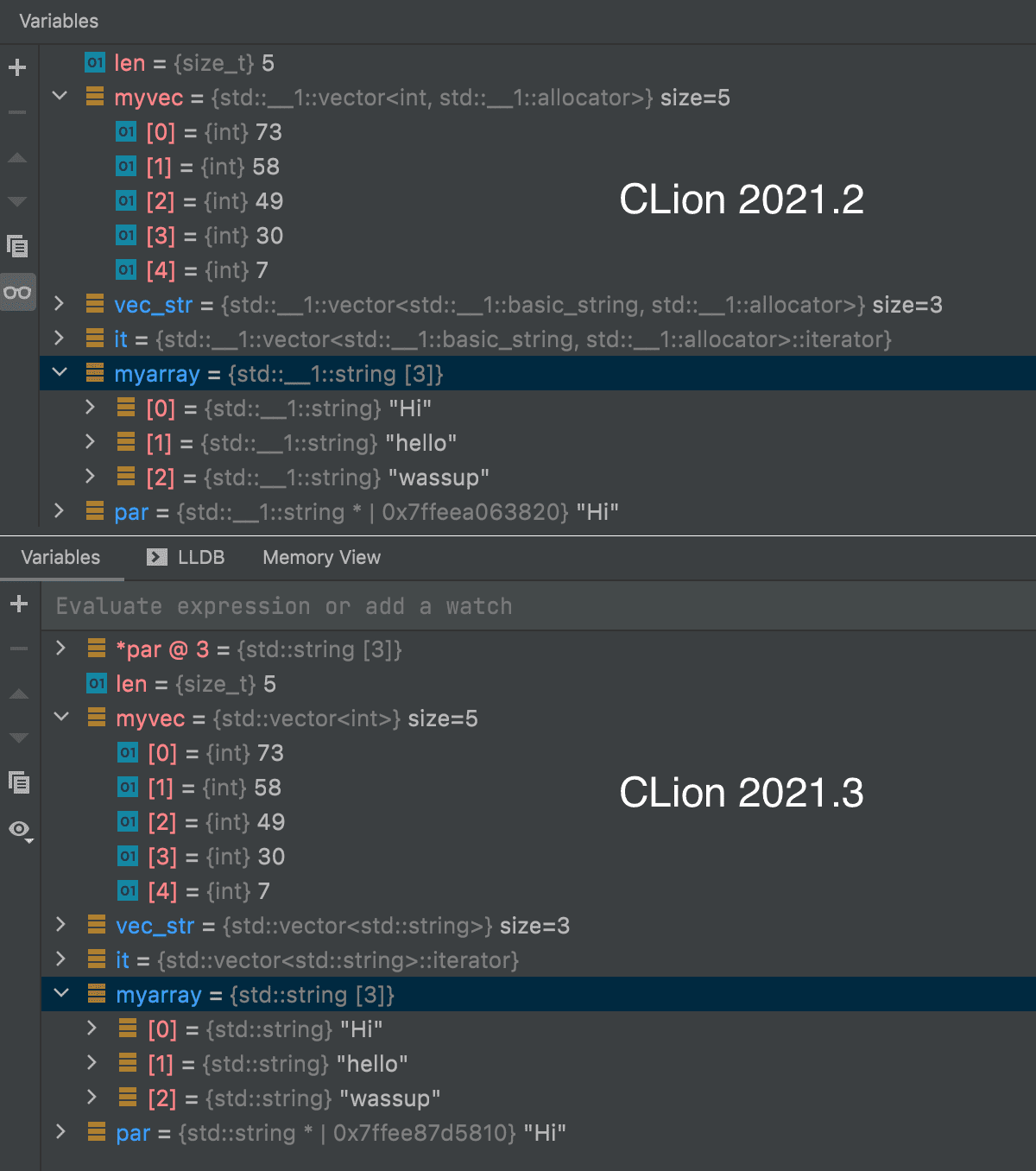 To get a more readable representation of continuous memory storage of the objects of one type, a new View as Array… action is available for any pointer variable. This action adds a watchpoint that renders a pointer value as an array. Just call the corresponding action on a pointer variable and specify the size of the array: 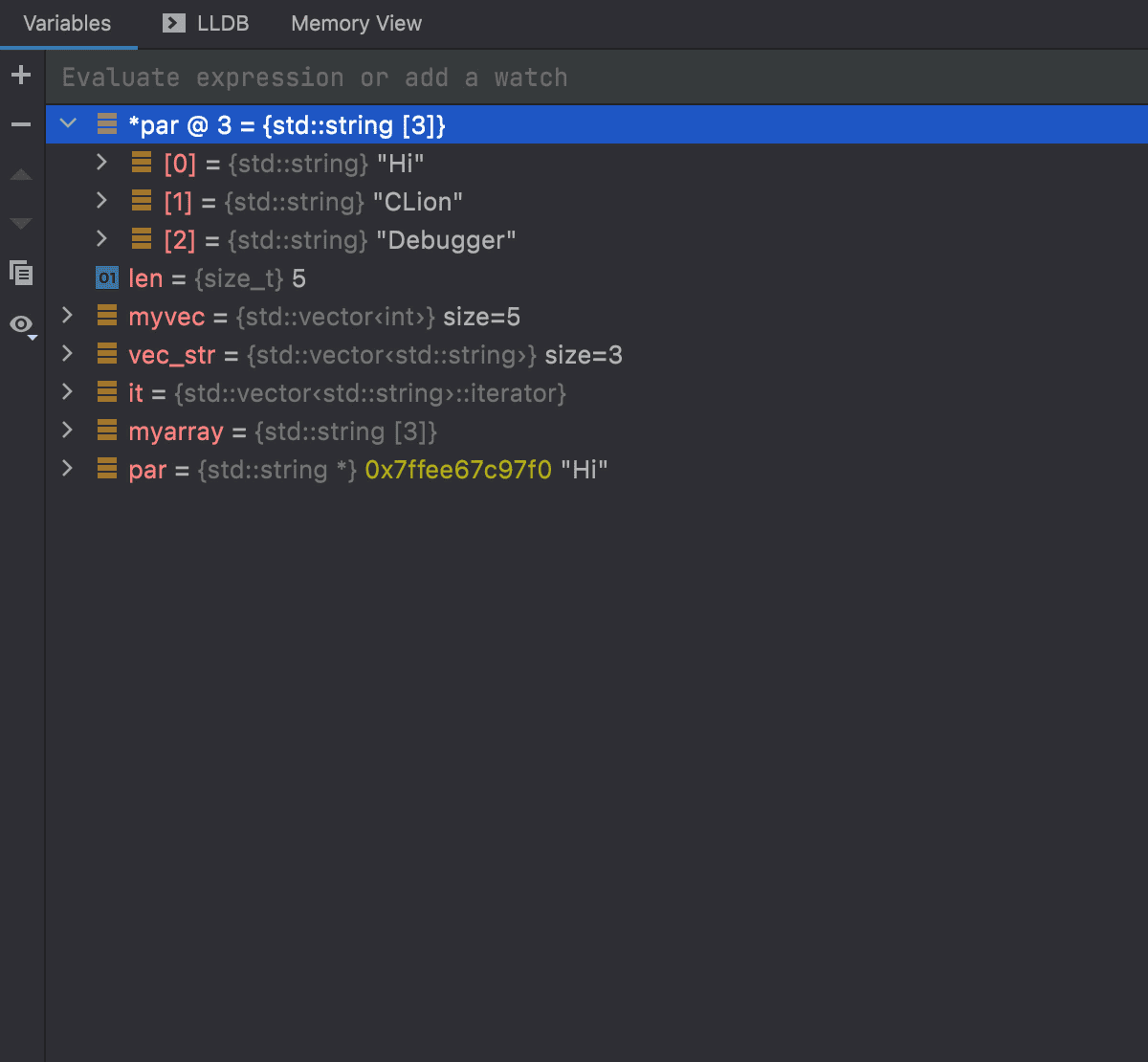 Among other debugger improvements are the Parallel Stacks View and bundled LLDB v13.

The RTOS thread view in the debugger was expanded to Zephyr OS. You can enable the integration in Settings/Preferences | Build, Execution, Deployment | Embedded Development | RTOS Integration. The FreeRTOS thread view which was added to CLion earlier was expanded by adding object and heap views. Learn more from CLion’s webhelp. 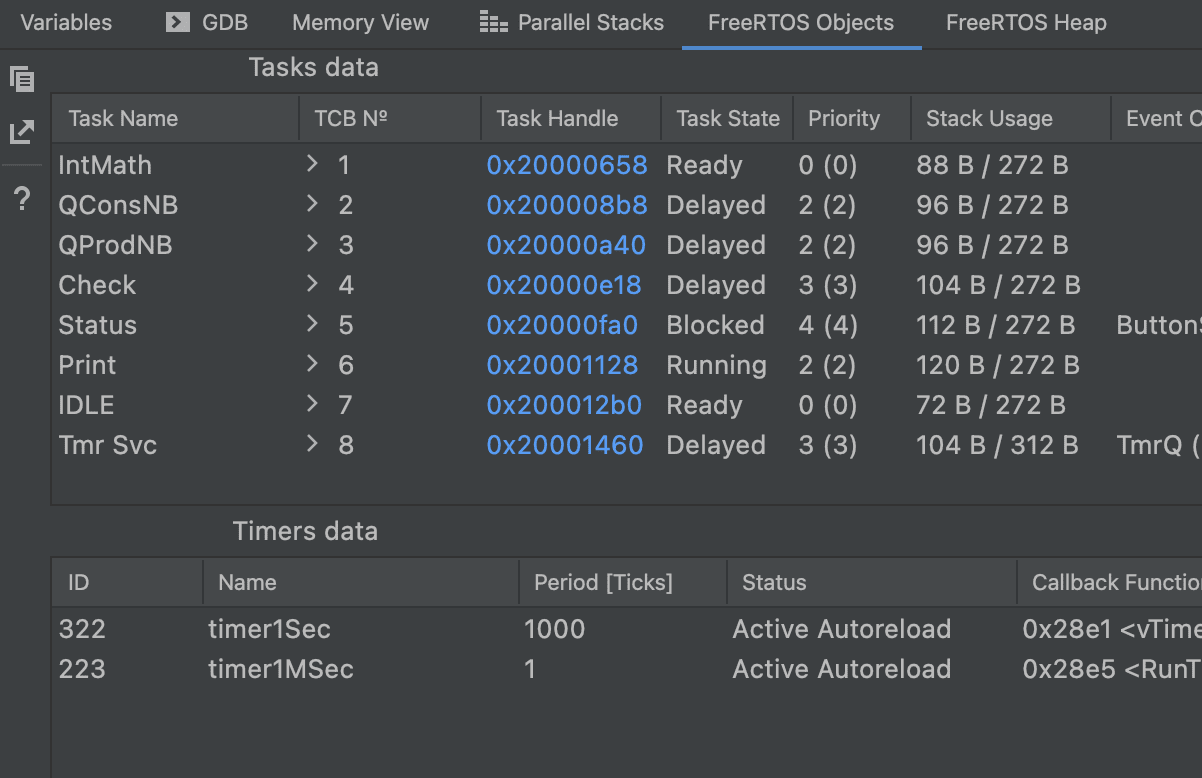 Docker and other toolchain updates

In CLion, a toolchain is a set of all the necessary tools required to build and run your application. Given the variety of possible tools in the C++ ecosystem, it’s important to have a way to configure them in the most concise way. CLion v2021.3 makes toolchains more flexible and easier to configure and customize.

We’ve introduced the Docker toolchain and recommend that you use it instead of configuring the Remote toolchain for your Docker container. It avoids redundant source code synchronization, as the project folder is simply mounted to the container. Create the toolchain in Settings/Preferences | Build, Execution, Deployment | Toolchains, select the Docker image you need, wait until the tool detection finishes, and save the settings. Now you are ready to use your Docker toolchain for project development. Watch the video to learn more:

The following changes are especially useful for embedded development, which allows you to configure toolchains with a huge variety of compilers and specific settings:

A few Windows-specific enhancements were introduced in CLion v2021.3:

Watch the video to learn more:

The CMake project model has received some updates, too:

Type hints in the editor

In some cases it might not be obvious which type is used in a specific location in the code, such as for auto variables, in structured bindings, and for lambda return types. To increase code readability, CLion 2021.3 adds type hints for deduced types.

Given that modern C++ code can avoid mentioning types at all, this can be a real help: 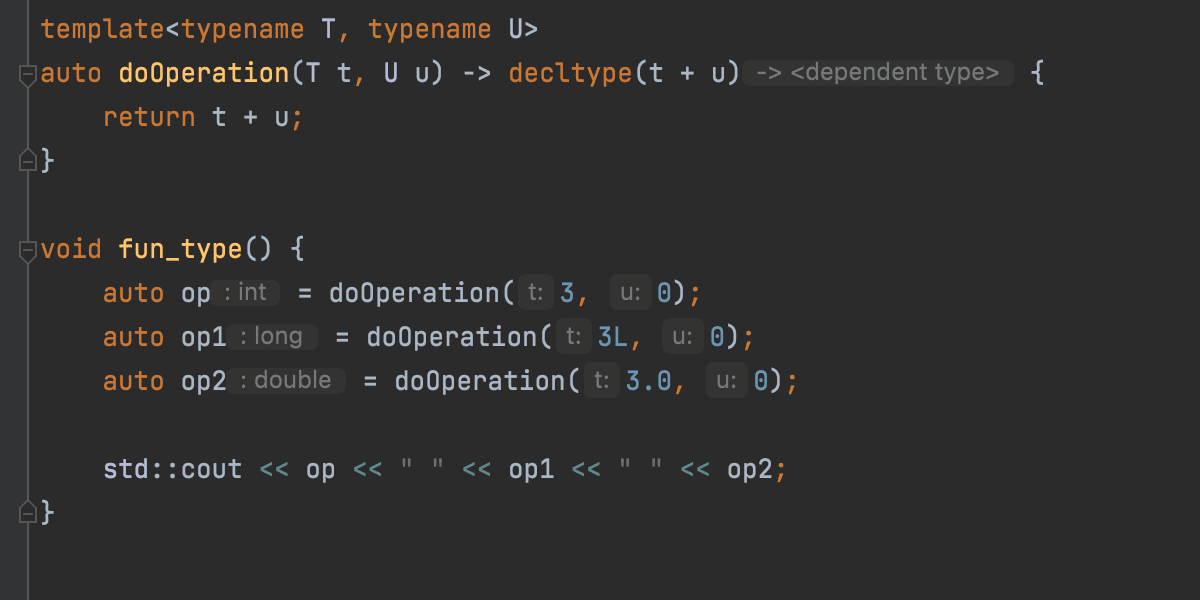 Combined with the parameter hints added in the previous versions, these hints make reading and maintaining code in C++ much easier:

CLion 2021.3 includes a list of fixes for Data Flow Analysis. The analysis is now call-context-sensitive. This means it treats different function calls differently without mixing the data taken from them for analysis. CLion’s lifetime analysis, which is implemented via DFA and based on Herb Sutter’s Lifetime Safety proposal, has been enhanced and can now identify dangling iterators and modified owners.

Did you know that you can connect CLion to Space to get access to your repositories, code reviews, Automation (CI builds), and packages? You can install the Space plugin manually in CLion.
Merge requests and code reviews are central to the workflow of many development teams. Wouldn’t it be great to be able to work on code and ask for reviews in the same place? The updated Space plugin now lets you do all of this from within CLion!

Read the documentation to learn more.

The plugin now fetches full stdlib info, including the dependencies and Cargo features.

The new name resolution engine now supplies data for the Auto-import quick-fix and for completion of items outside the current scope. This makes auto-import available for macros and improves processing of complex re-exports – all while boosting performance.

ML-assisted completion was enabled by default. Crate and version completion in Cargo.toml has been improved significantly thanks to local indexing of the crates.io metadata. The plugin also added a quick-fix to qualify full paths and new refactoring to extract struct fields.

On the running and debugging side, code coverage now works for stable toolchains, WSL support is enabled by default, and the debugger is capable of automatically breaking on “panic!”.

You can find more details in the dedicated blog post.

A quick glance at just a few of the changes:

We encourage you to give CLion 2021.3 a try. If you have an active subscription, you can update today. Otherwise, start your free 30-day trial to check out the new features and see what you think!