In this release cycle, we focused on enriching language support and adding more code insight features. The run and debug functionality has received a few major updates, too. Read on to learn the details.

IntelliJ Rust does its best to keep up with how macros 2.0 are evolving. Two of them, addr_of and addr_of_mut, have already been added to the Rust standard library and can be used with stable toolchains.

Now, if there are macros 2.0 in your code (for example, std::ptr::addr_of), the plugin will expand them properly and resolve the names. You will get completion, quick documentation, and other code insight features for them, and annotations and quick-fixes will be available as well: 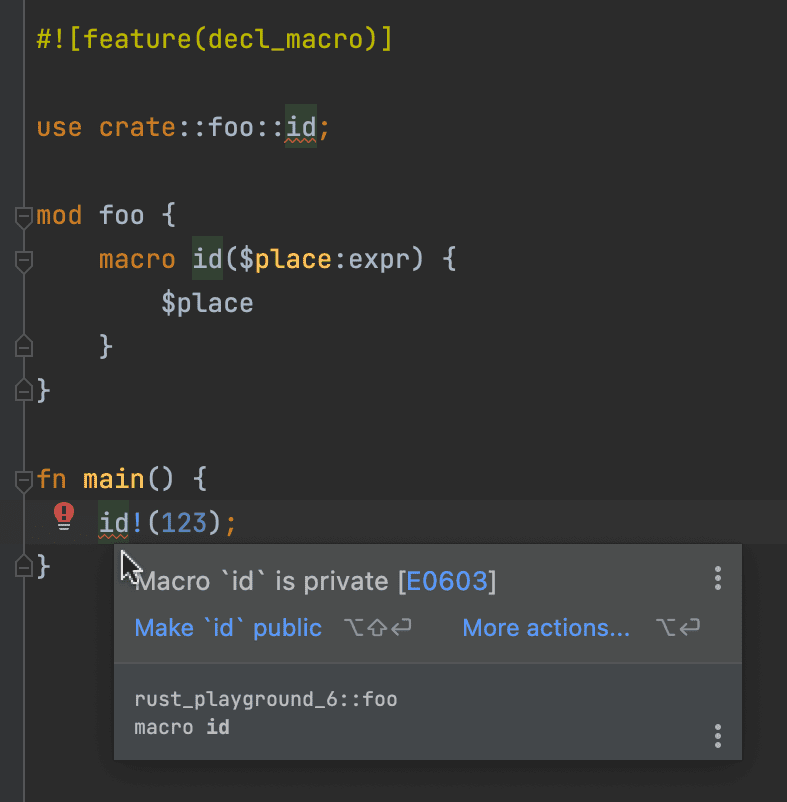 Macros 2.0 are marked with a special orange icon to help you distinguish between them and regular declarative macros (their icon is grey):

We are also continuing to add more features for procedural macros, which we announced a while ago.

The plugin is now capable of expanding procedural attribute macros so that all the expanded items are included in type inference and name resolution. However, the implementation for this is in the early stages of development, so there may be unexpected behavior. 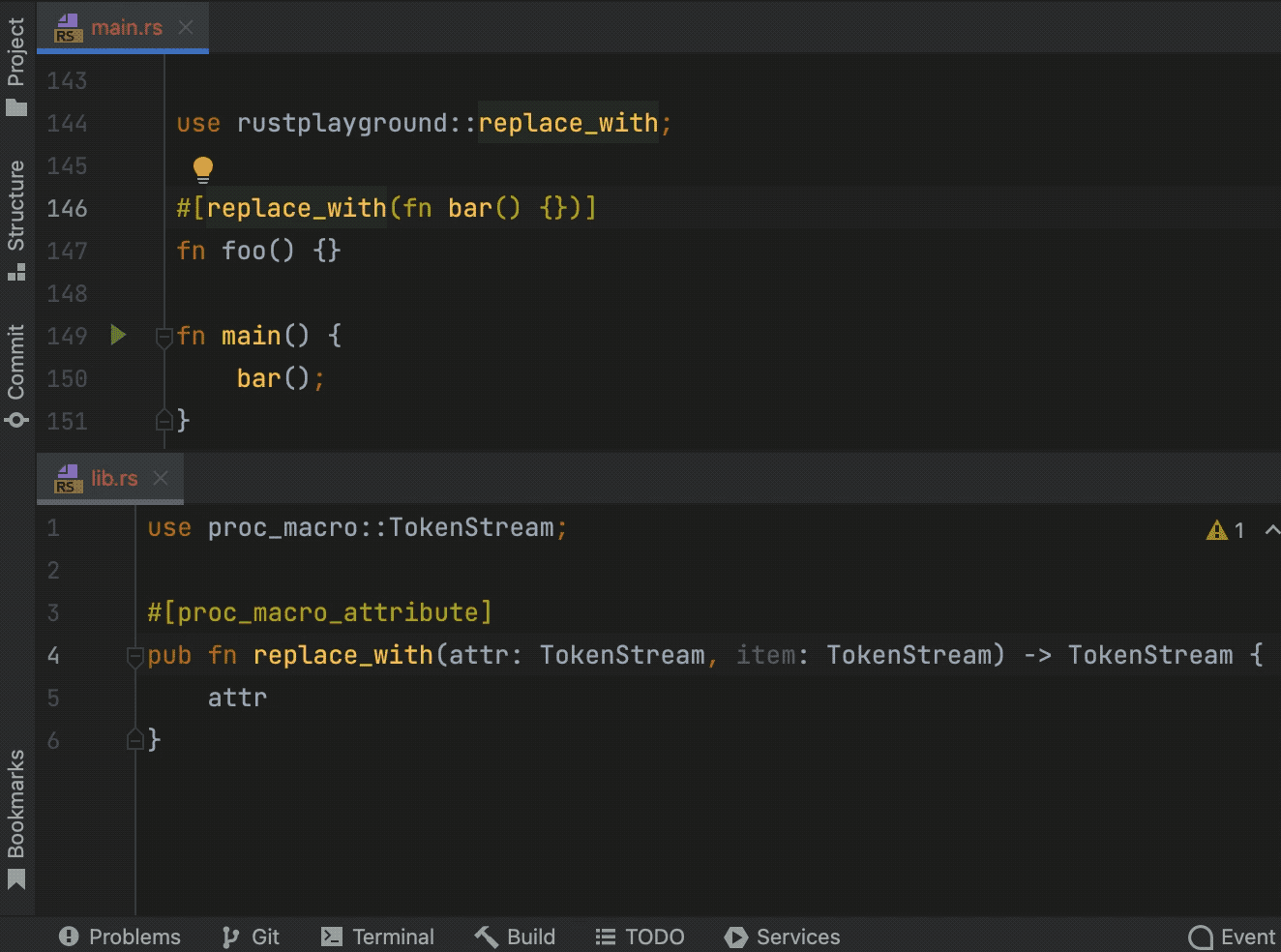 As for custom derive macros, all of the items generated by them are now taken into account. Previously, the plugin could only properly work with the generated impl blocks.

Note that procedural macro support is still experimental and disabled by default. To turn it on, call Help | Find Action (Ctrl+Shift+A on Linux or Windows, ⇧⌘A on macOS), search for Experimental Features, and enable two flags: org.rust.cargo.evaluate.build.scripts and org.rust.macros.proc. 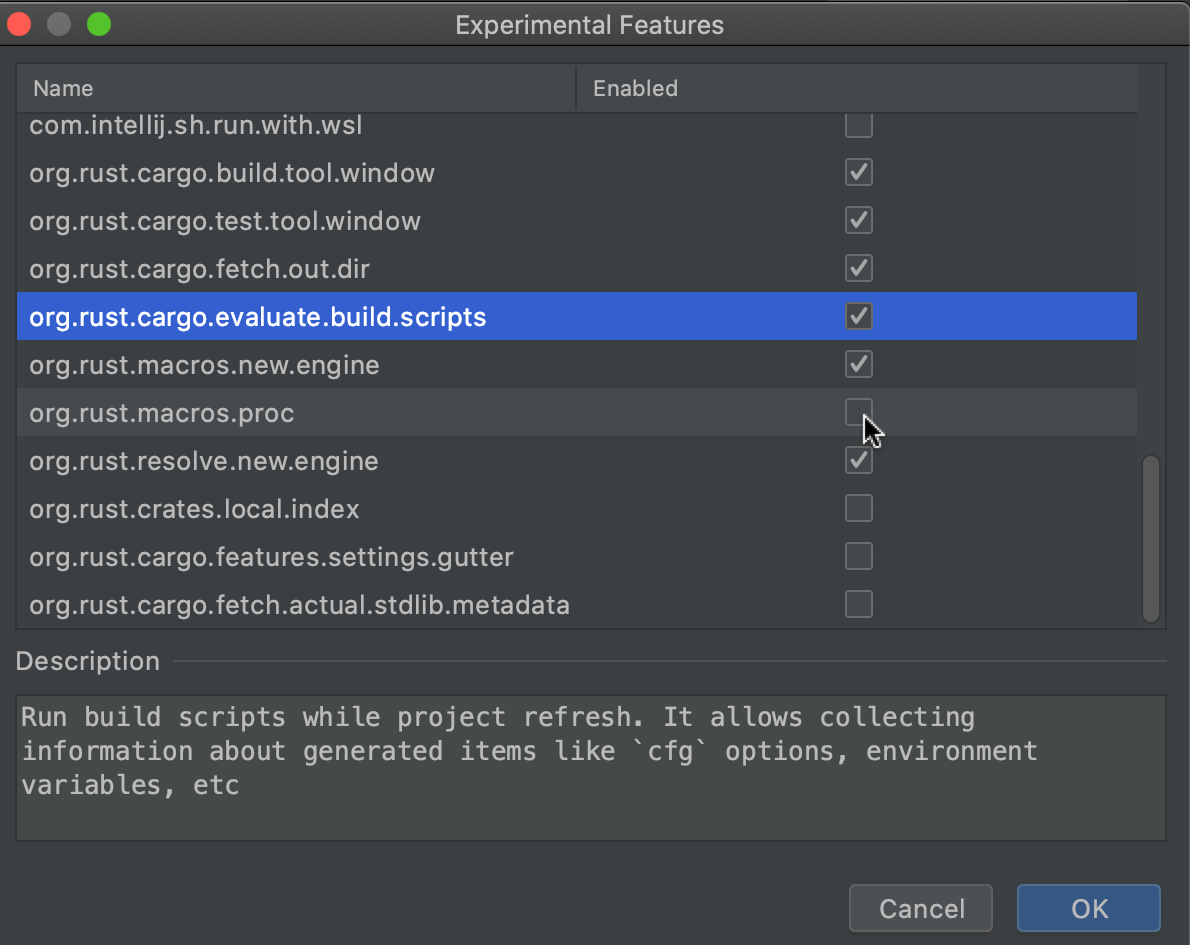 Make sure to reload your project afterwards via Refresh Cargo Projects in the Cargo tool window.

New syntax contracts: let else and if let guard

The plugin now fetches all information about standard library packages, including their dependencies, editions, and Cargo features. With this on hand, IntelliJ Rust understands the stdlib structure much better in a variety of cases, allowing it for example, to build a proper list for completion suggestions and provide navigation for the items defined in the std::os module:

Did you notice the arrows next to the completion suggestions on the screenshot above? They mark the entries that were reordered according to the sorting provided by ML completion.

If there are any errors during the stdlib data fetching, the plugin will report them in the Sync tab of the Build tool window.

The new name resolution engine now supplies data to the Auto-import quick-fix and completion for items out of the current scope. This makes auto-import available for macros and improves the processing of complex re-exports, all while boosting performance. 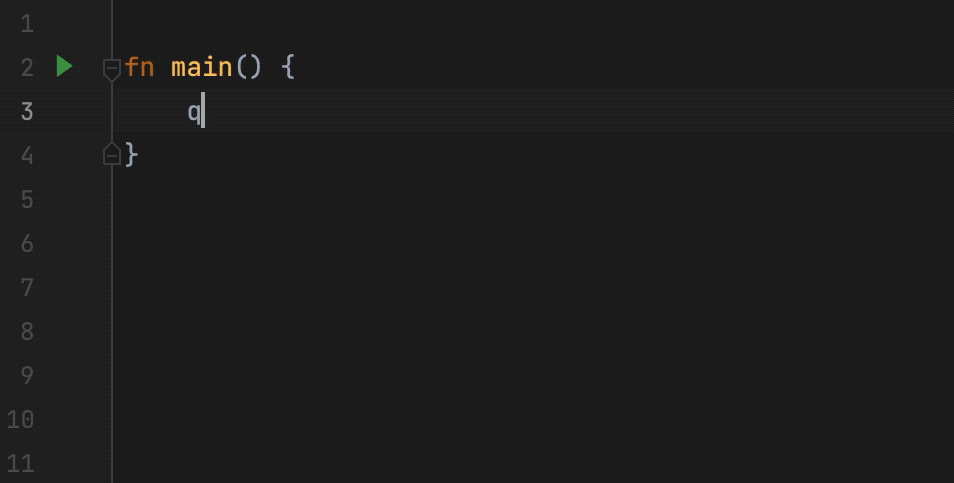 Improvements to the Unused import inspection

Unused import detects when there are use statements that don’t affect your code and suggests a quick-fix to remove them. Now it detects unused imports even for modules with nested submodules: 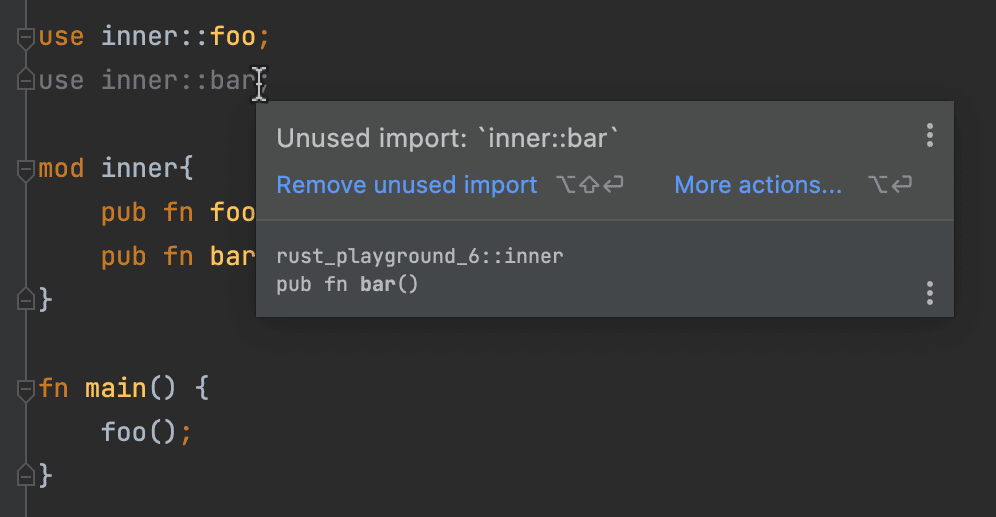 At the moment, this inspection is disabled by default due to a number of false positive warnings. You can enable it at any time in Settings / Preferences | Editor | Inspections | Rust: 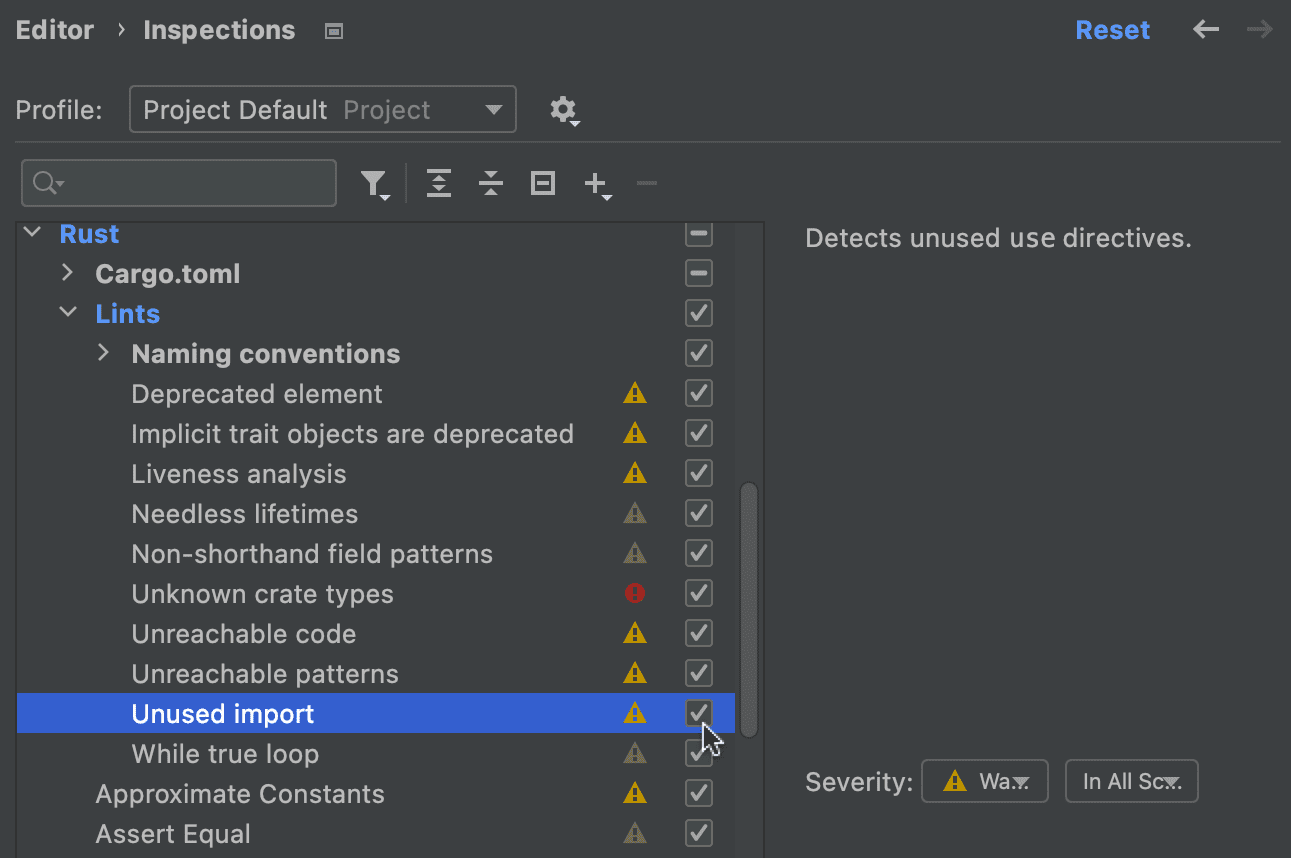 Completion based on machine learning data has been enabled by default. The suggestions you get in the completion list are sorted according to the data gathered anonymously during the IDE’s Early Access Program. We want to emphasize that your source code is never collected – only information about your interactions with the code completion UI.

To learn which elements were actually reordered by the ML algorithm, tick the Mark position changes in the completion popup checkbox in Settings / Preferences | Editor | General | Code Completion.

If you prefer to disable the ML completion feature, clear the corresponding checkbox in Settings / Preferences | Editor | General | Code Completion.

You can now quickly extract selected struct fields into a separate struct. You can call this feature via an intention action (select it from the list of the ‘lightbulb’ options) or as a refactoring (call Refactor This via Ctrl+Alt+Shift+T on Linux or Windows, ⌃T on macOS). 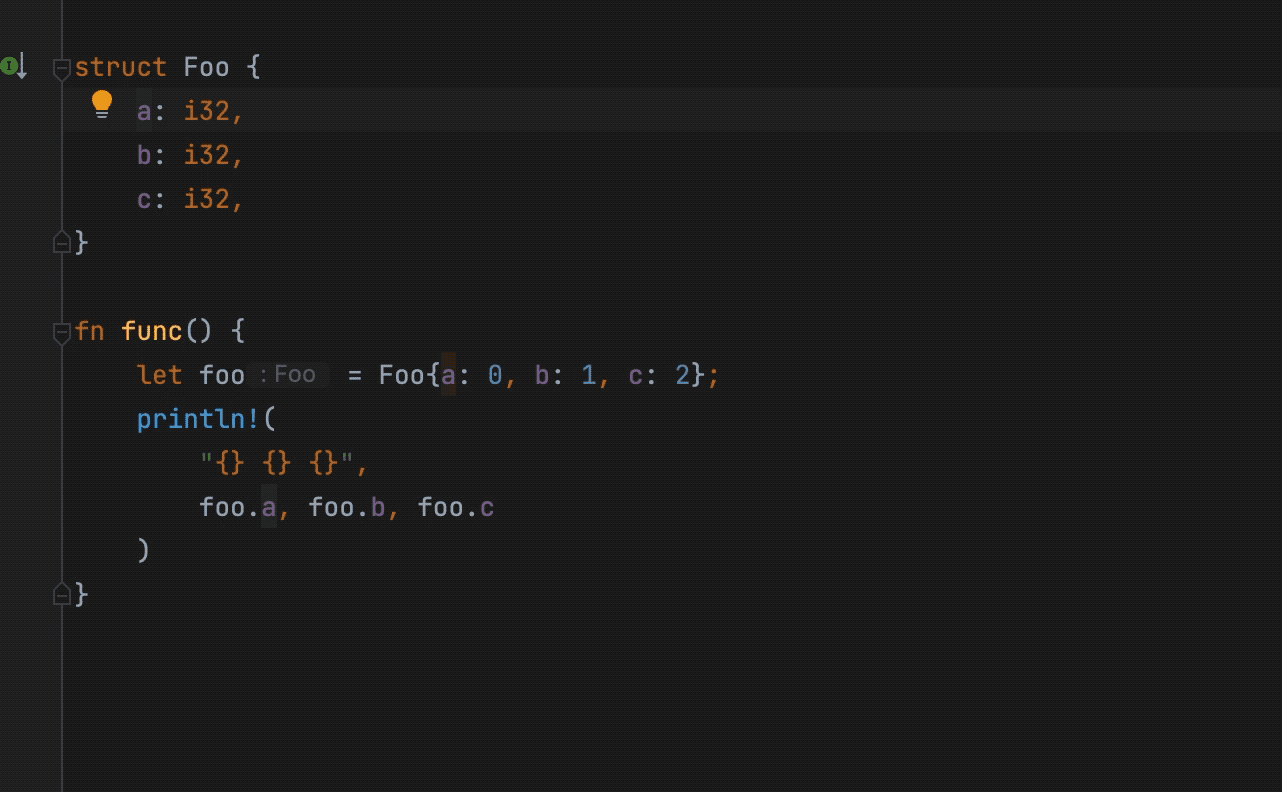 This new quick-fix will fully qualify an unresolved path with an import candidate: 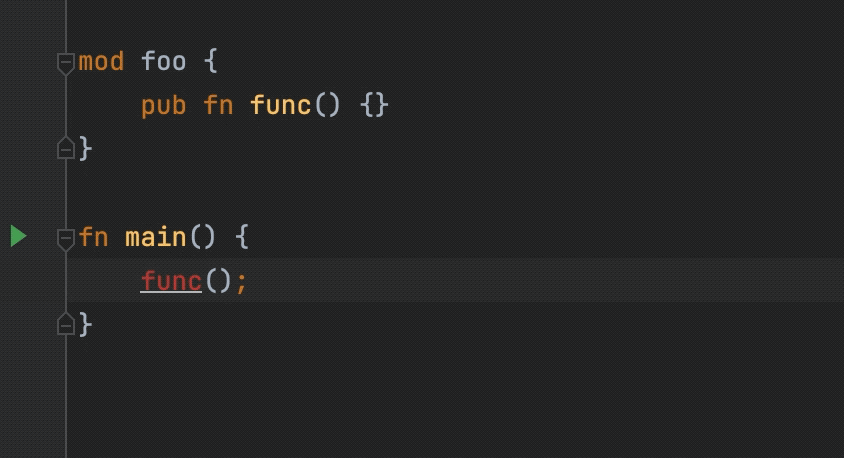 Completion for dependency names and versions in Cargo.toml has been improved significantly thanks to indexing of the local crates.io metadata.

For example, previously, if you wanted to add the tokio-tungestine library, you might have needed to invoke completion more than once in order to get the proper entry in the list of suggestions. This was because the plugin had to send a separate request to crates.io every time completion was invoked. It now knows all of the possible variants beforehand, which allows all the options to appear in completion right away: 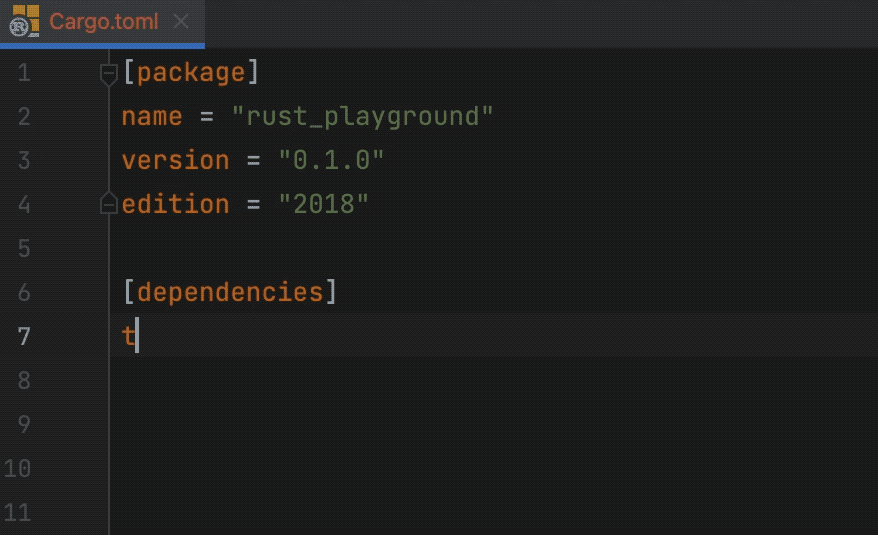 This is a starting point for the implementation of more code analysis using local crates indexing. If you are interested in following our progress on this feature, keep an eye on this meta issue.

For a summary of all the recent debugger updates, see our previous blog post about them.

In this release cycle, we enabled WSL support by default. You can use it with the plugin in any of the compatible IDEs, but debugging is available in CLion only.

When working with WSL, make sure to set the WSL toolchain location in Settings / Preferences | Languages & Frameworks | Rust. You can select from the detected toolchains or provide the path manually:

To debug on WLS in CLion, you also need to switch to a WSL toolchain in the CLion settings: 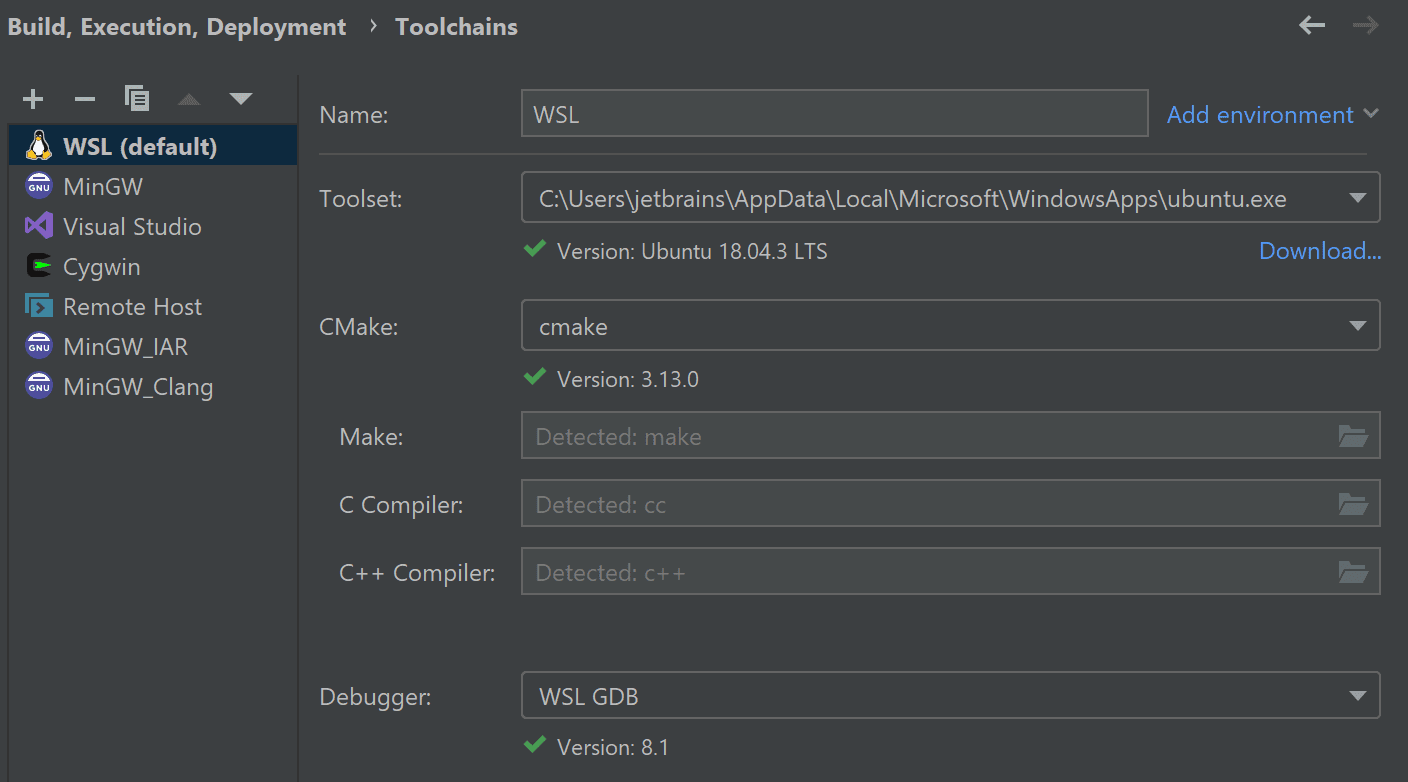 When a panic occurs in your application, the plugin’s debugger will stop inside the panic! call automatically, even if there are no breakpoints. This can help you investigate the stack trace and variable context around the point of panic. 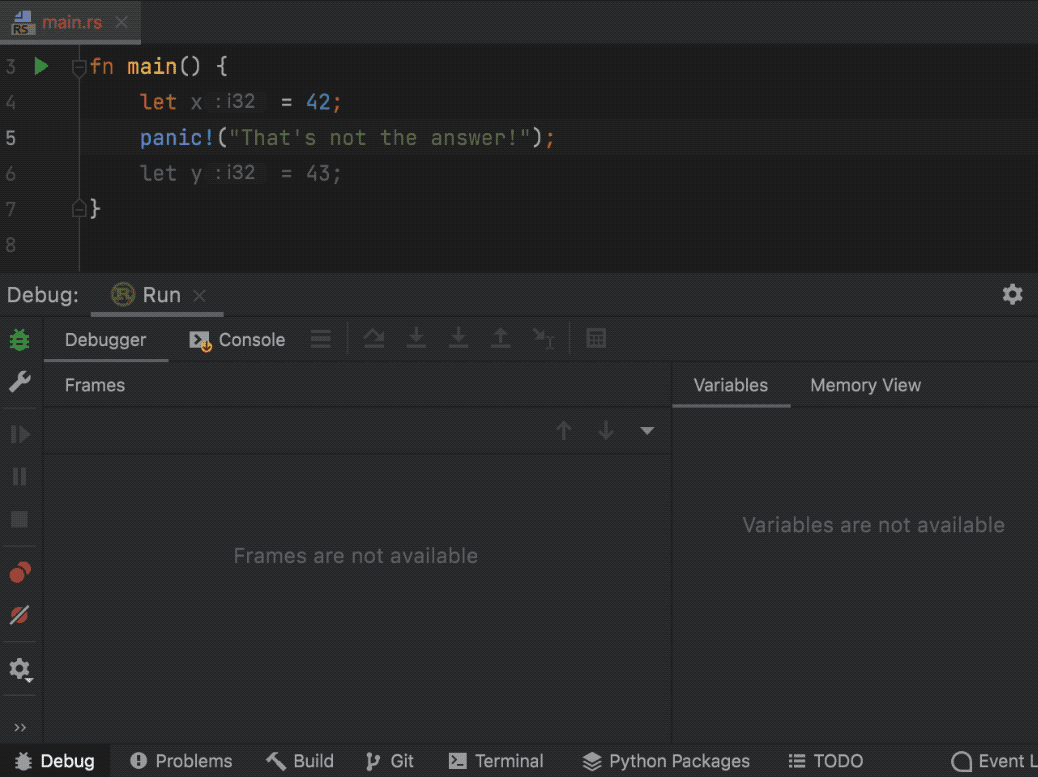 This feature is enabled by default. If you prefer the debugger not to break on panics, go to Preferences | Build, Execution, Deployment | Debugger and clear the corresponding checkbox.

One last notable update is that code coverage now works for both nightly and stable toolchains.

We want to thank the external contributors who have helped us in this release cycle:

That’s it for the changes we’ve made in IntelliJ Rust over the last few months. Please share your feedback here in the comments, and don’t hesitate to report any issues in our tracker. We also encourage you to take a look at the plugin’s documentation.

Thank you for reading, and stay tuned! 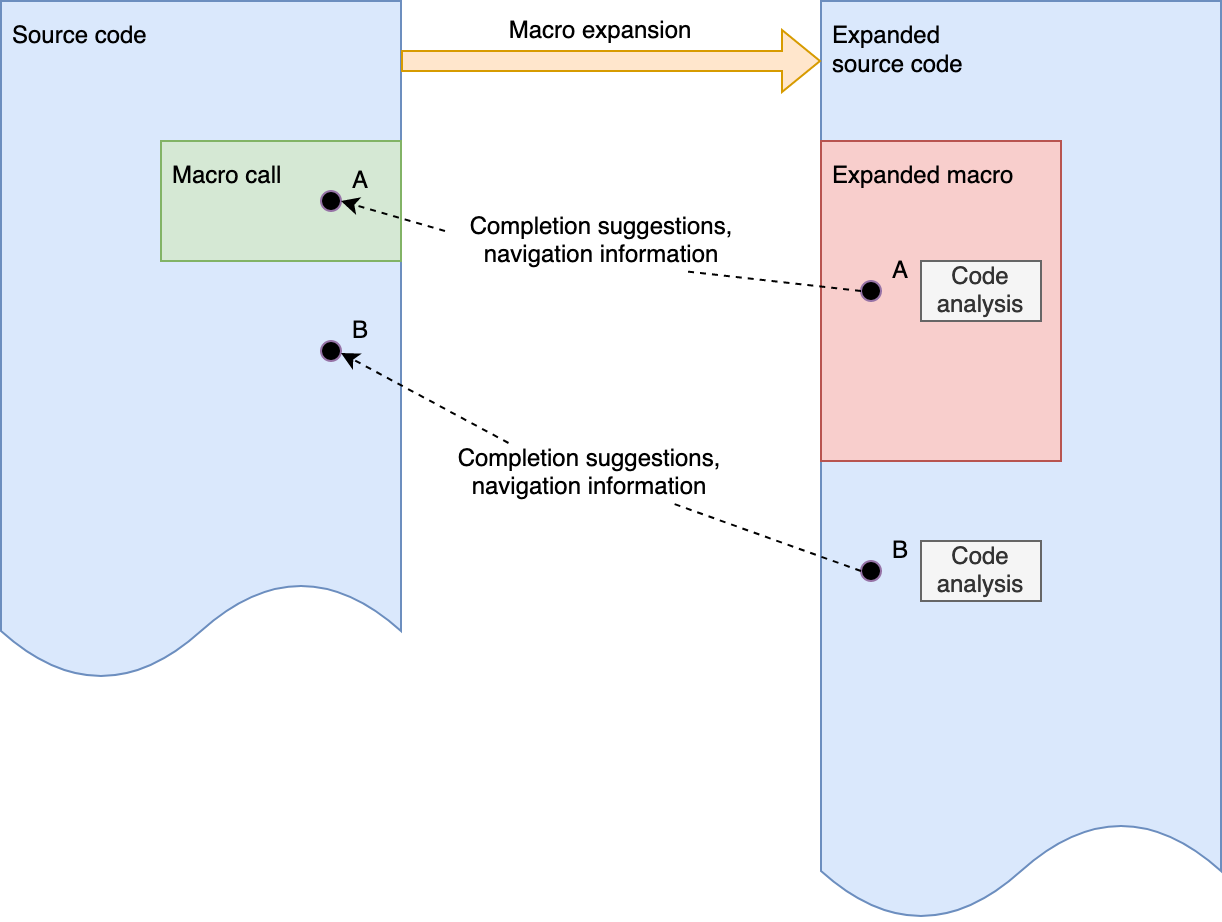 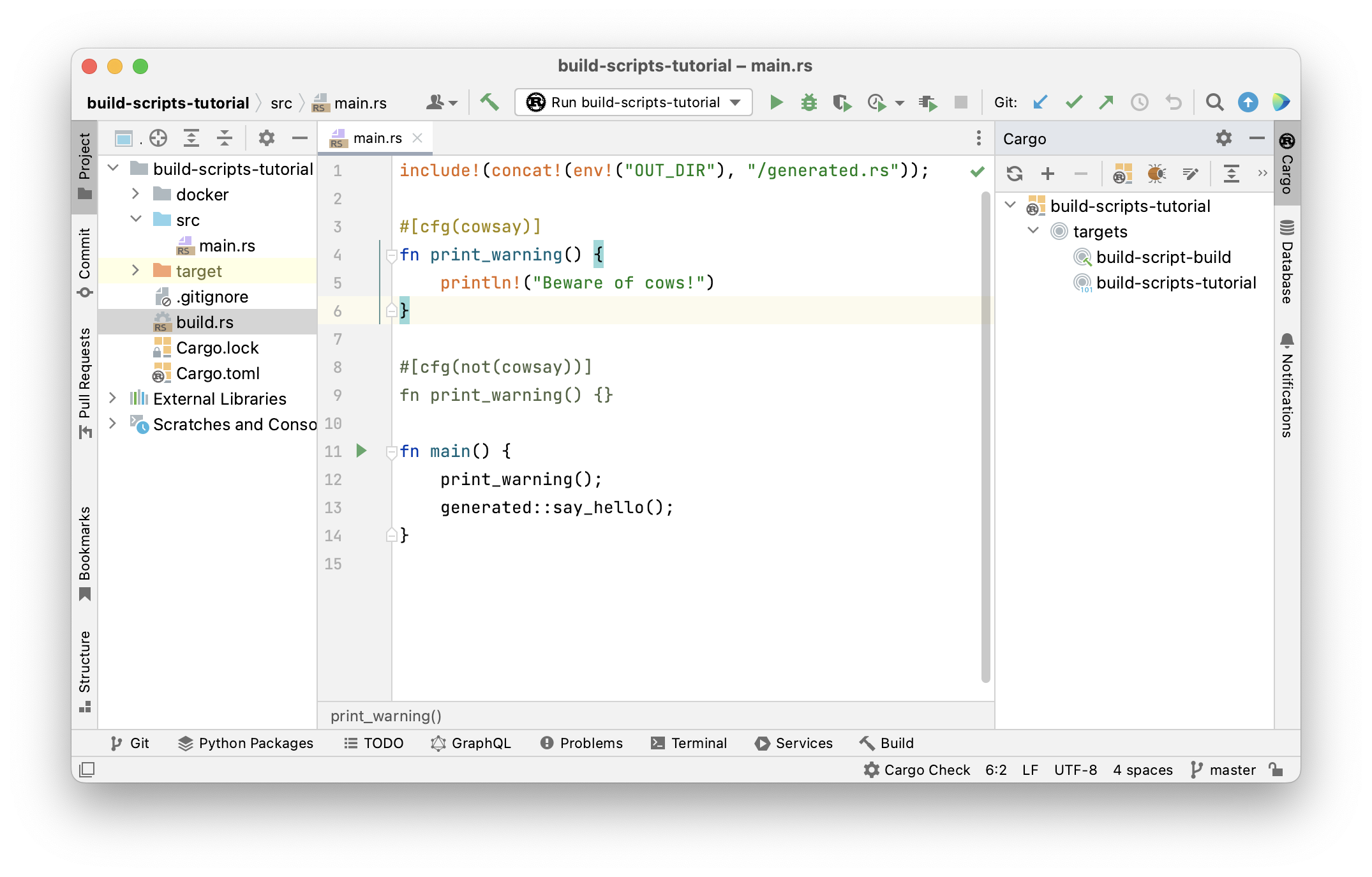