This past weekend we have published a new ReSharper 10 EAP build, along with compatible builds of other ReSharper Ultimate tools. This time notable changes are available in ReSharper, ReSharper C++ and dotPeek. Let’s see exactly what the latest EAP has in store.

As the new major version of NUnit is approaching release, we have laid the groundwork to support it in ReSharper test runner. We’ll definitely need to make more changes in order to support the release version of NUnit 3.0 but this far, the latest Beta 4 is supported. 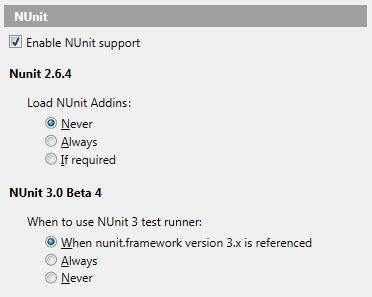 Note that at this point, there’s a critical issue with NUnit 3.0 Beta 4 support in that you can’t run inherited tests in hierarchies of fixtures. We’re looking to fix this although we might need help from the NUnit team.

For your information, here’s the full list of fixes that made it into ReSharper 10 EAP 4.

dotPeek has introduced the non-modal, async Find Usages mechanic that has been available in ReSharper since version 9.1, which lets you keep on working with the decompiler while it executes a long usage search in the background.

In other news, you can now opt to show IL code as comments to decompiled C# code, which effectively merges its default text viewer and the normally separate IL Viewer window, all in one view. This is not a default, and you should select Show IL code in comments in dotPeek options in order to turn this mode on.

Finally, you can now make dotPeek display IL code not only for decompiled code but also for source code reproduced from symbol files.

In addition to a set of fixes, this ReSharper C++ EAP build includes a set of noteworthy changes:

We’re planning to release further EAP builds, hopefully more than once a week. However, very soon we’ll be wrapping up development so that we can meet the target release date for ReSharper 10 and other ReSharper Ultimate tools, which is set to November 2.