Writing plugins for ReSharper and Rider

JetBrains tools are developed with extensibility being a principal goal. In fact, many new features we ship could also be just plugins. However, we realised that specifically the setup experience has been a little entry barrier. If you ever tried to write an IDE extension, we recommend you to try again, because developing ReSharper and Rider plugins becomes a lot easier!

In this blog post, we will guide you through how to get started, and give you some basic advice on how to succeed with your plugin ideas.

Click bait news: “I was typing code and then this happened!”

ReSharper supports plugins since the early beginnings. Some time ago, you would just compile your plugin and put the assemblies into the ReSharper bin directory. Or you would pass a /ReSharper.Plugin parameter along with the path to devenv.exe.

The easy times have changed a bit, unfortunately. This happened foremost because of the growing ecosystem around our .NET tools – hello dotPeek, dotTrace, and dotMemory – but also due to increasing demand for performance optimizations in combination with Visual Studio. And now there is also Rider, as our cross-platform IDE based on IntelliJ IDEA, which also – kind of – allows us to load ReSharper plugins if you use some magic involving bits of JVM, Kotlin, and Gradle. Sigh… Let’s get over the technology bingo!

One template to rule them all

We want you to get started quickly with writing plugins in both ReSharper and Rider, and the resharper-rider-plugin template will do just that! It is a Work-In-Progress, so any feedback is welcome. The template can be downloaded from the release page and installed using the dotnet CLI.

It is recommended to also use the dotnet CLI for unpacking the template. For instance, call dotnet new resharper-rider-plugin --name AwesomePlugin. This will unpack not just a project, but a full solution containing all relevant files for targeting ReSharper and Rider: 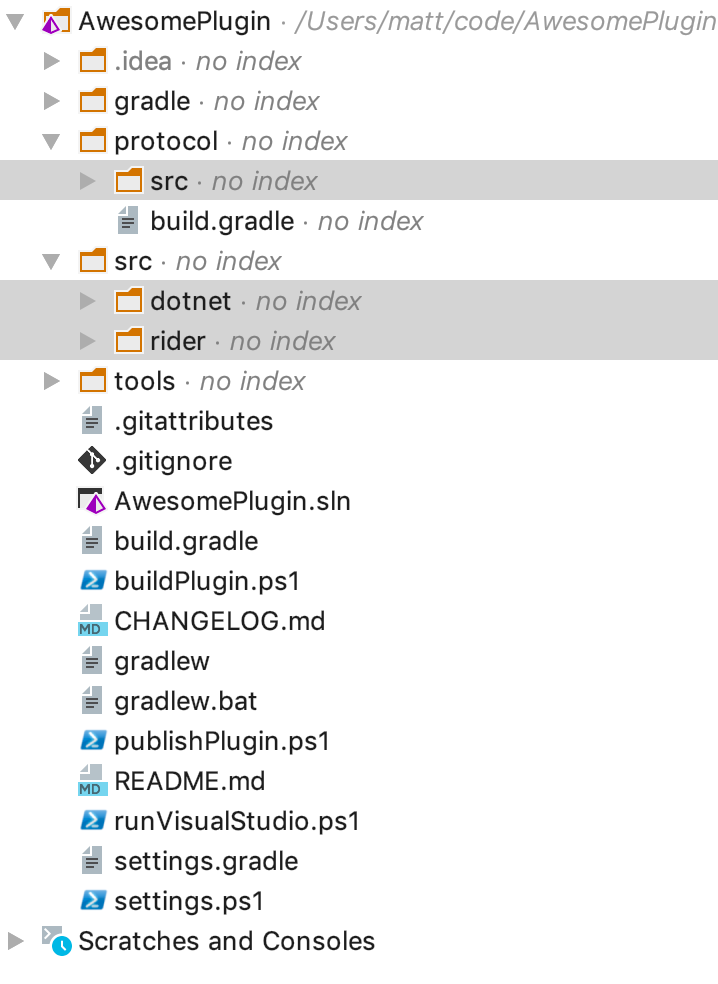 The convenience of this template is that it also ships with run configurations to test your plugin with a single click, in either Rider or Visual Studio:

Rider plugins can have two parts, a ReSharper part dealing with source code (like C# code analysis and refactorings), and an optional Rider part for custom UIs and other IntelliJ platform related features.

These two parts run in separate processes, and can communicate with each other using a custom protocol. The Generate protocol run configuration helps to integrate into this protocol easily. A sample protocol extension is pre-generated in the protocol directory. You can find more background in the article Building a .NET IDE with JetBrains Rider written by Maarten Balliauw and Chris Woodruff.

Now, just try executing one of the Rider or Visual Studio configurations, and your plugin will be shown in an experimental instance. By default, the template ships with samples for code inspections and quick-fixes. Can you spot what they do? 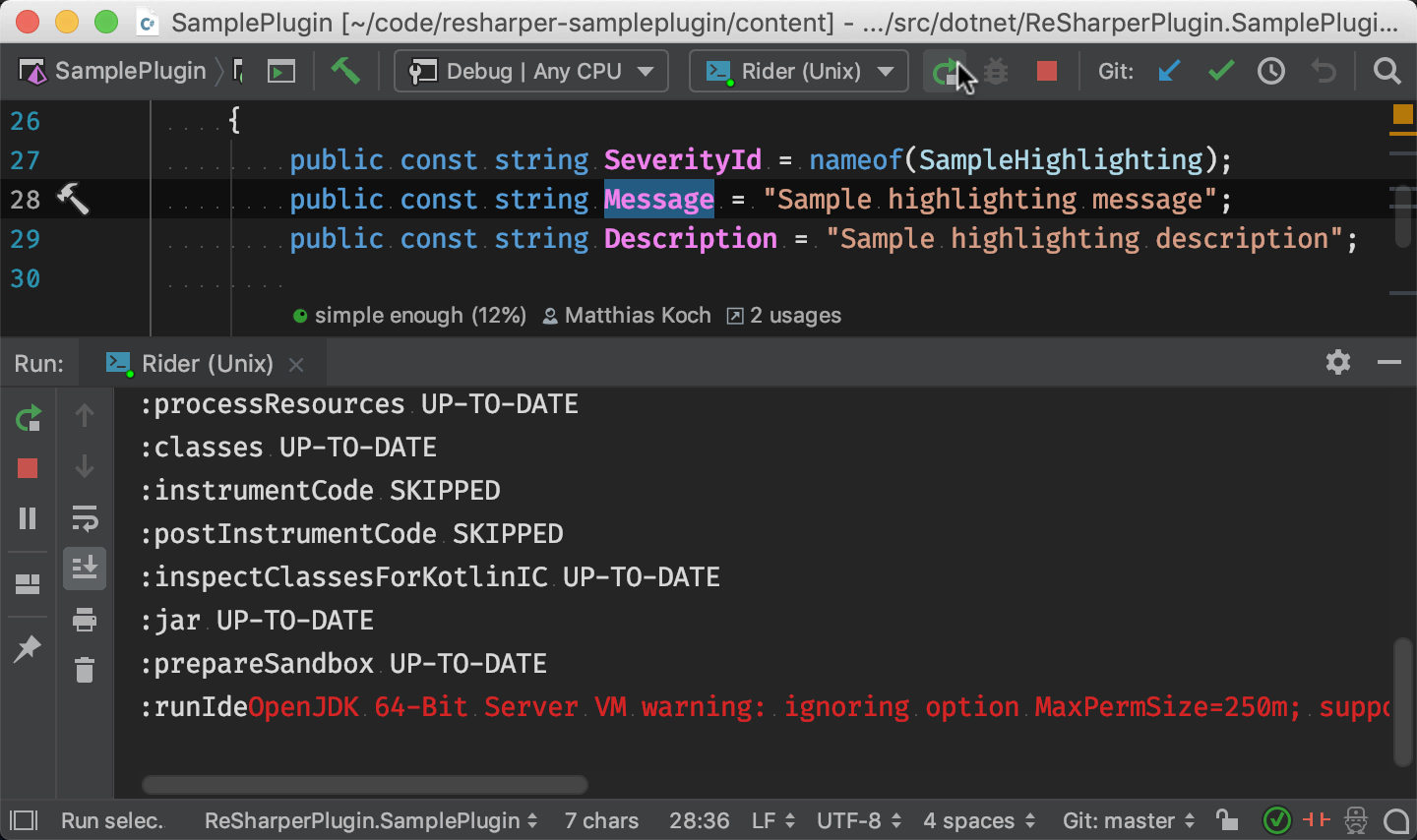 So what can my plugin do?

As an experienced ReSharper or Rider user, you probably know about common features like code inspections, quick-fixes, or context-actions. Our developer guides for the ReSharper SDK and the IntelliJ SDK are good resources to follow up on more advanced topics.

Nevertheless, the whole platform of ReSharper, Rider, and IDEA is one big open SDK and pretty much everything is extensible. That also results in the fact that the developer guides will probably never be able to cover all the possibilities.

Many plugins are open-source – looking at their repositories will give you some more views on how things can be done. Some of the open-source plugins are maintained by JetBrains employees and illustrate how common features are implemented while following best practices. The resharper-unity and fsharp-support plugins are good resources for a variety of applications.

Help! I need somebody!

As already mentioned, covering the entire SDK is almost impossible. So we would like to encourage you to approach us directly if you have questions. We recently started an internal Slack channel that allows you to get together with us and other developers to exchange ideas, and seek for help. Drop me a message to get invited.