Test-Driven Development, or TDD as it is commonly referred to, is the development process in which tests are written first, then the code to support them is created, and, when every test passes, code is refactored.

Let’s have a look at how the unique features of GoLand allow us to be proficient with this workflow.

Let’s start by writing some tests by navigating to any test file, e.g. tdd_test.go

To generate the tests, we can use the Generate feature (Alt+Insert on Windows/Linux or Cmd+N on macOS). 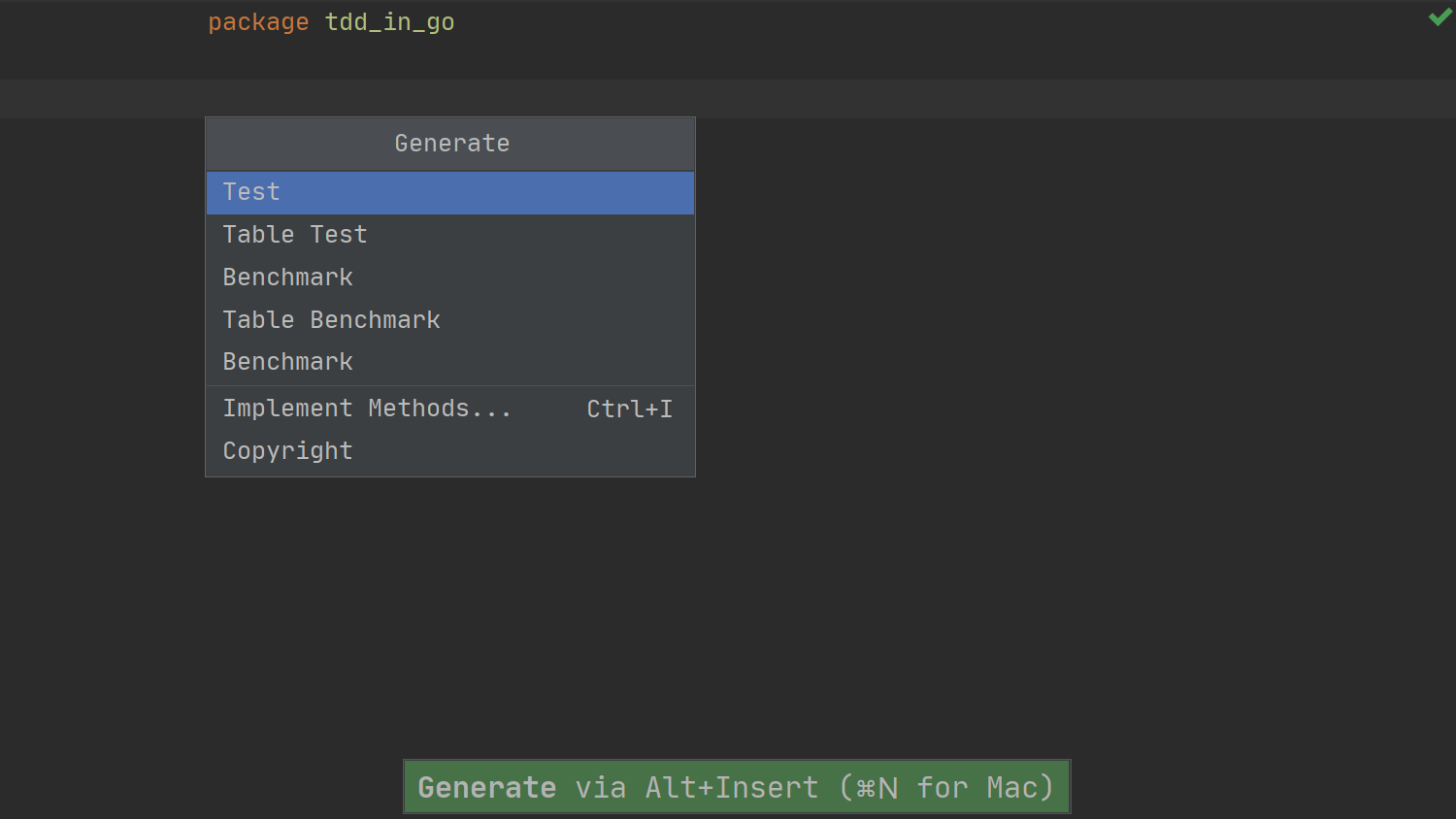 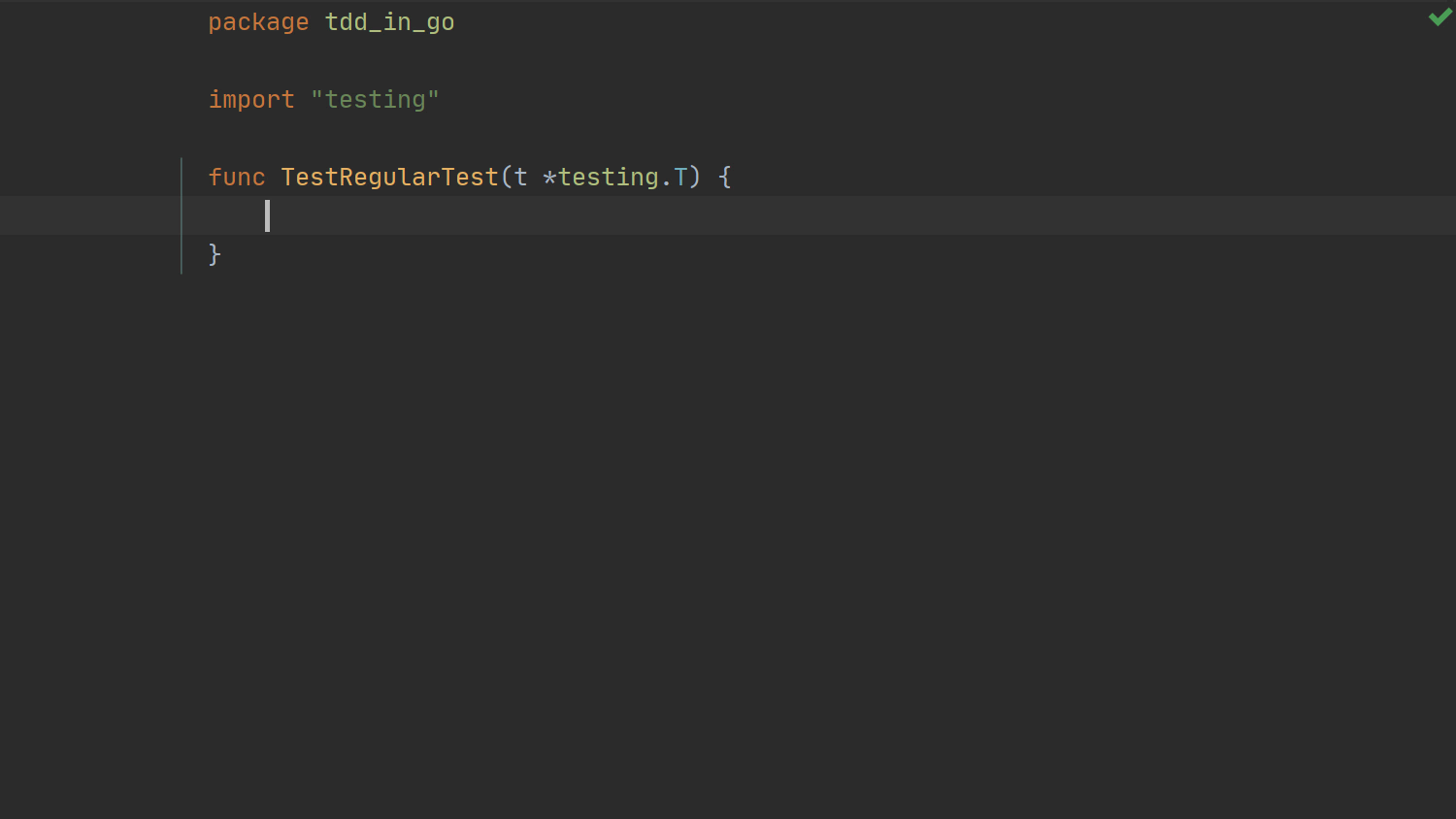 … or a test using the table-testing approach: 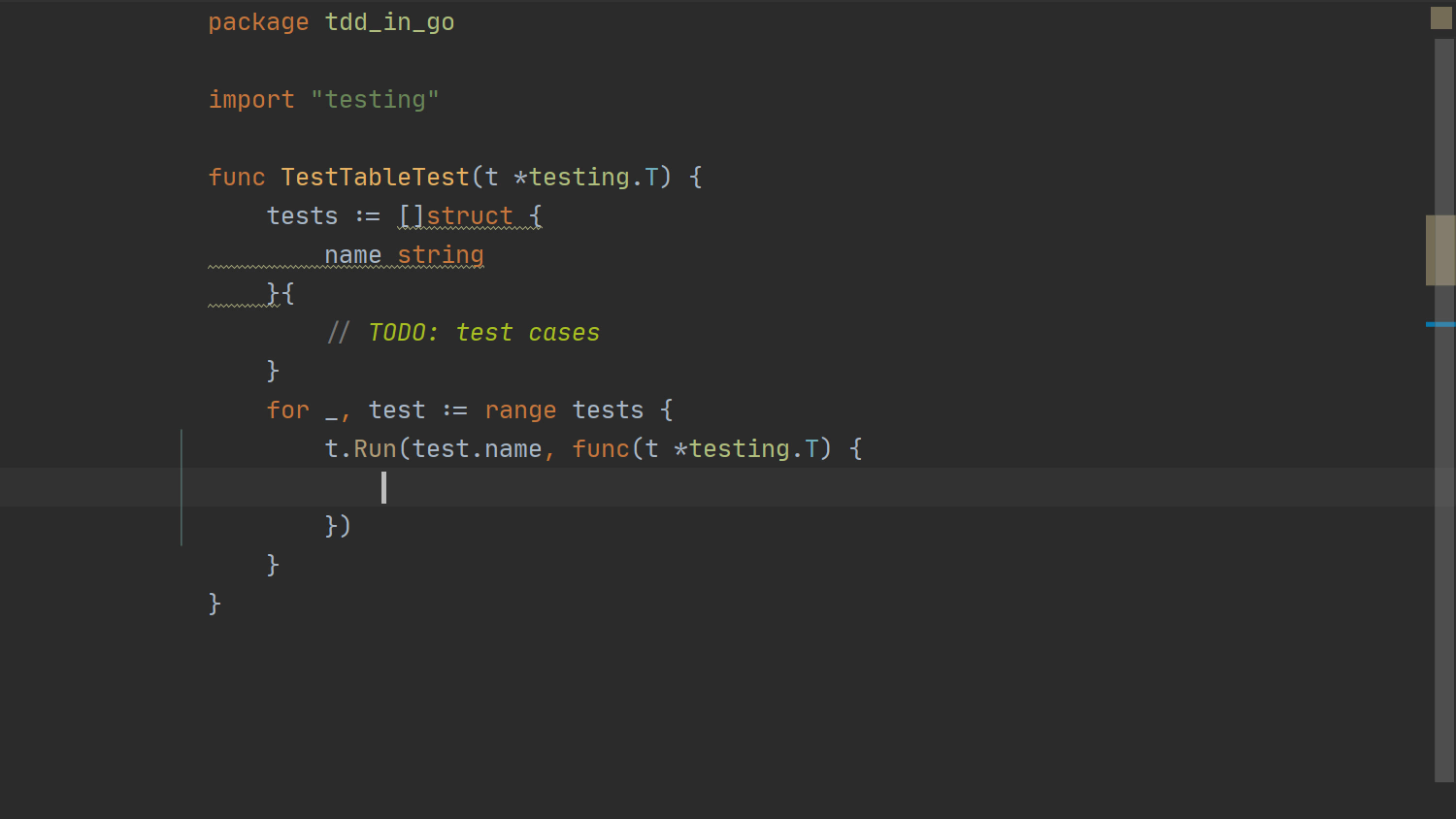 Moving forward, I’ll use the table-testing approach, as it makes it easy to add test cases and keeps my code nice and tidy.

Once our test cases are added, our code should look like this: 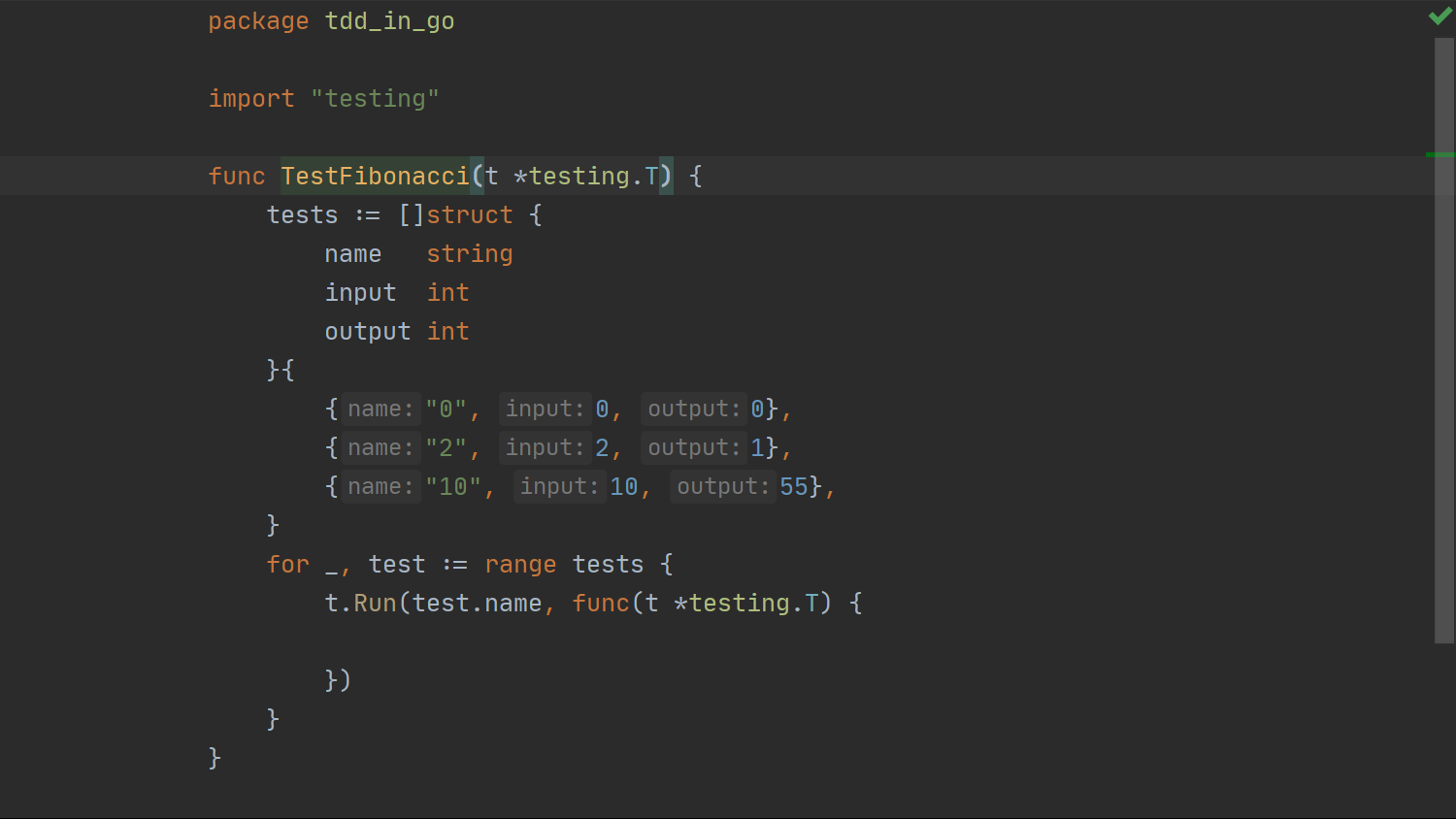 Run tests to see that they fail

Using the Run context configuration (Ctrl+Shift+F10 on Windows/Linux or Ctrl+Shift+R on macOS) will run our tests. 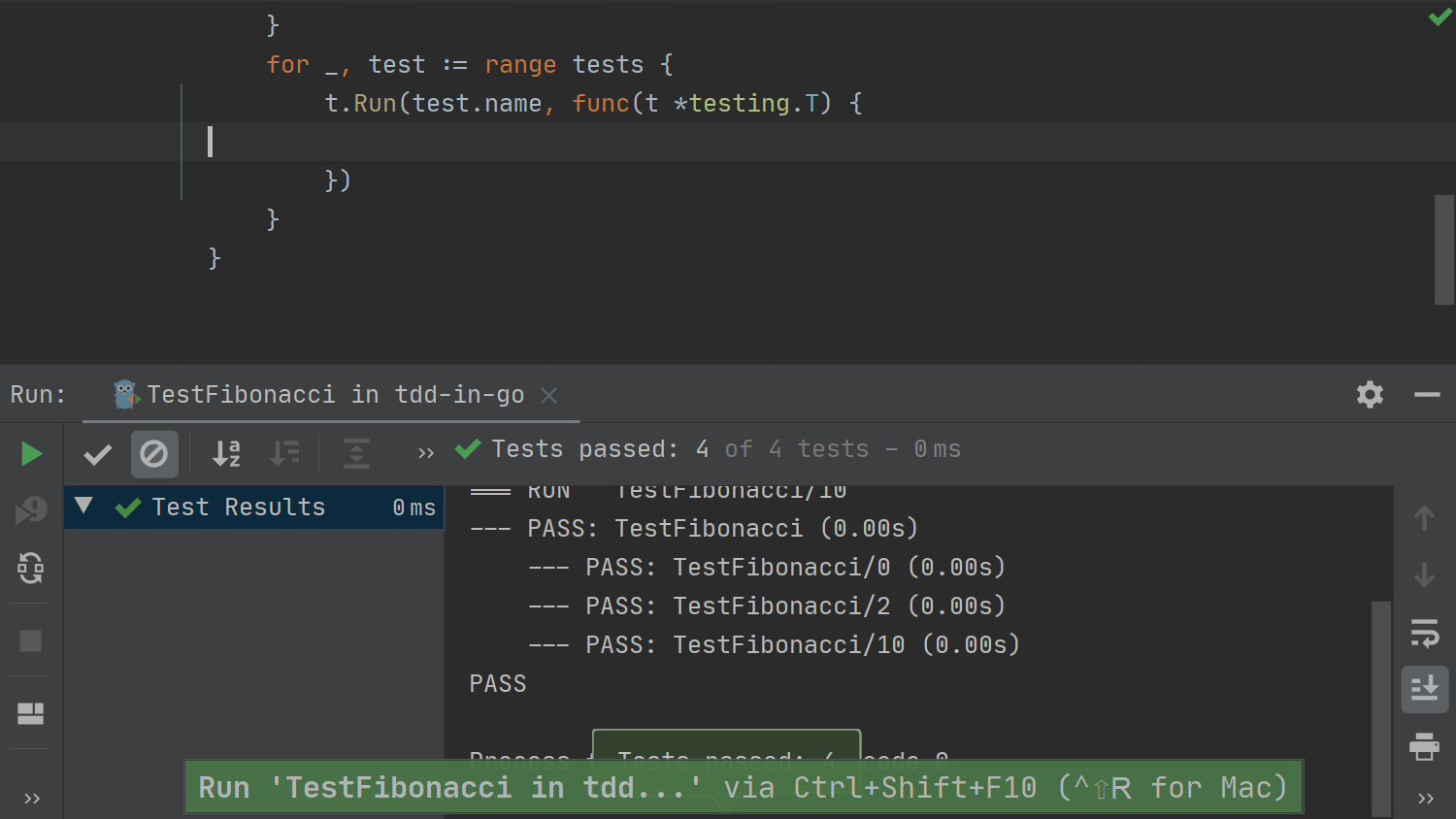 Normally, tests should fail now, but we are not making any assertion that can fail, so, the Go tool will report this as a pass.

As such, let’s move to the next step, generate some code and see the results.

Write the code and make it pass the tests

Given we don’t execute anything in the tests yet, let’s add the basic code in place. 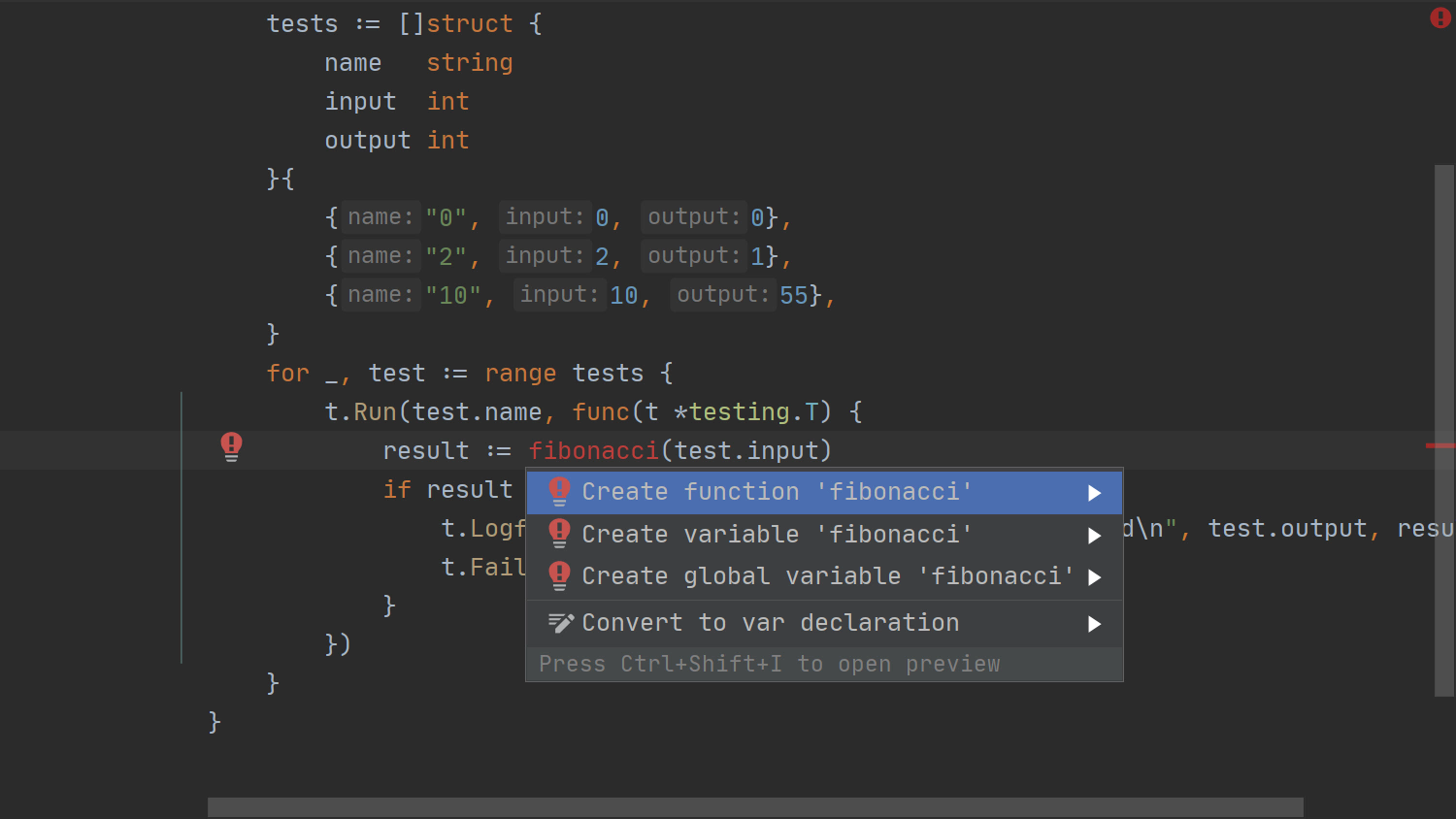 Many people like running tests automatically on changes, especially when doing TDD, so let’s enable that option in the IDE as well. 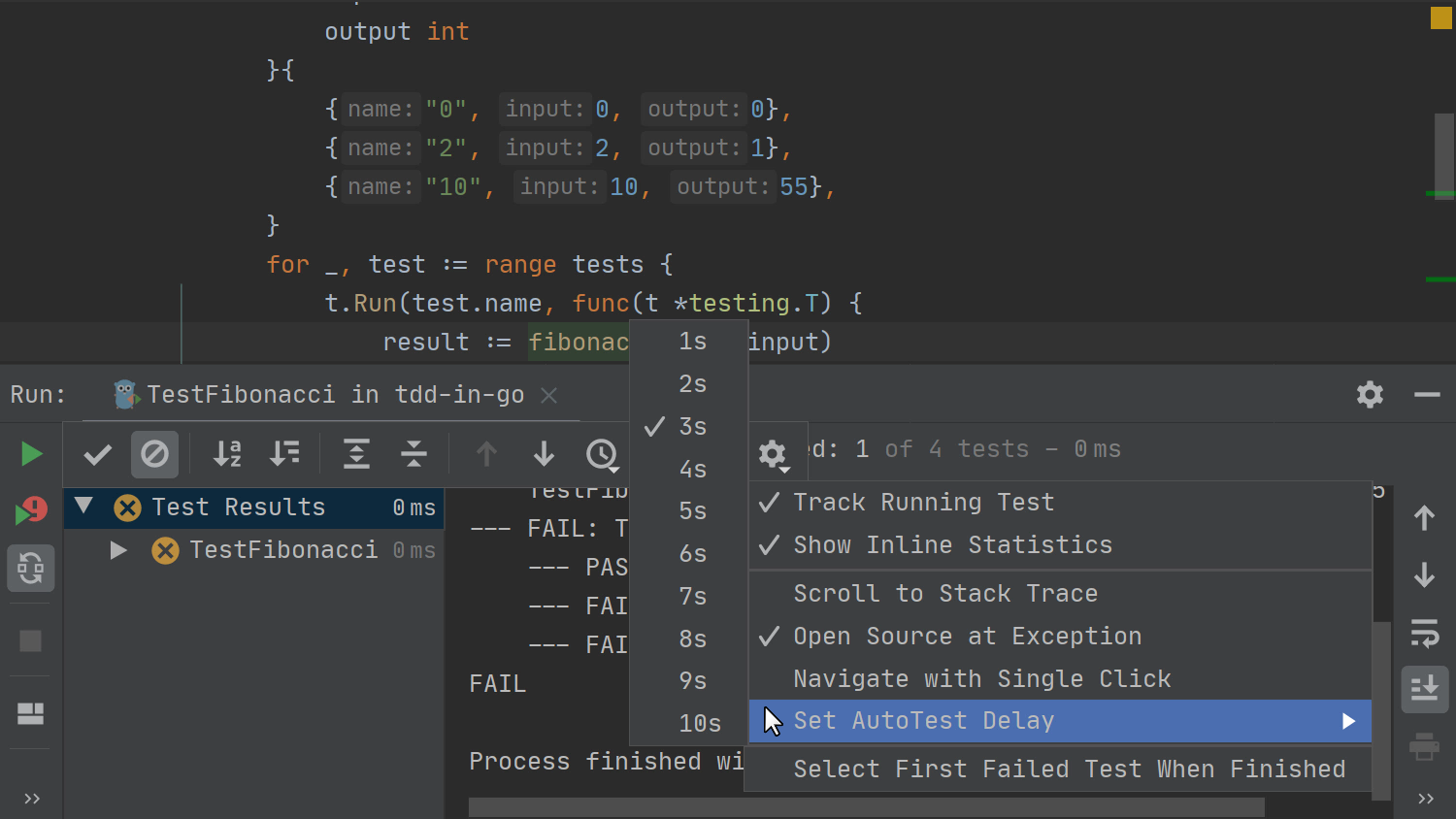 The next step is to implement our code and see how it makes our tests fail: 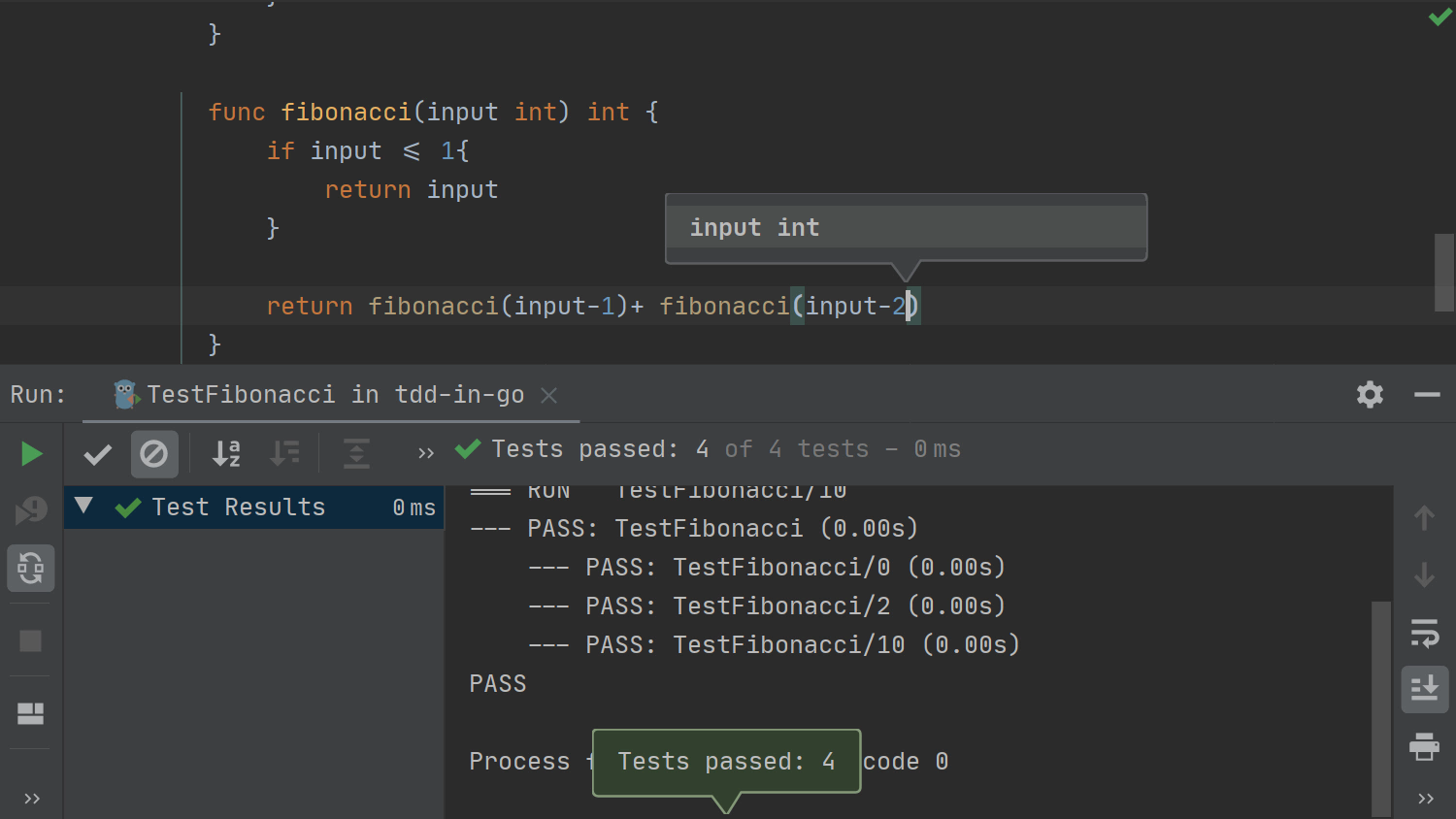 With the code in place and working, it’s time to move it to a non-test file and clean it up a bit. This is where the IDE’s refactorings such as Move, Rename, and others come into place.

First, let’s move the code to a different file: 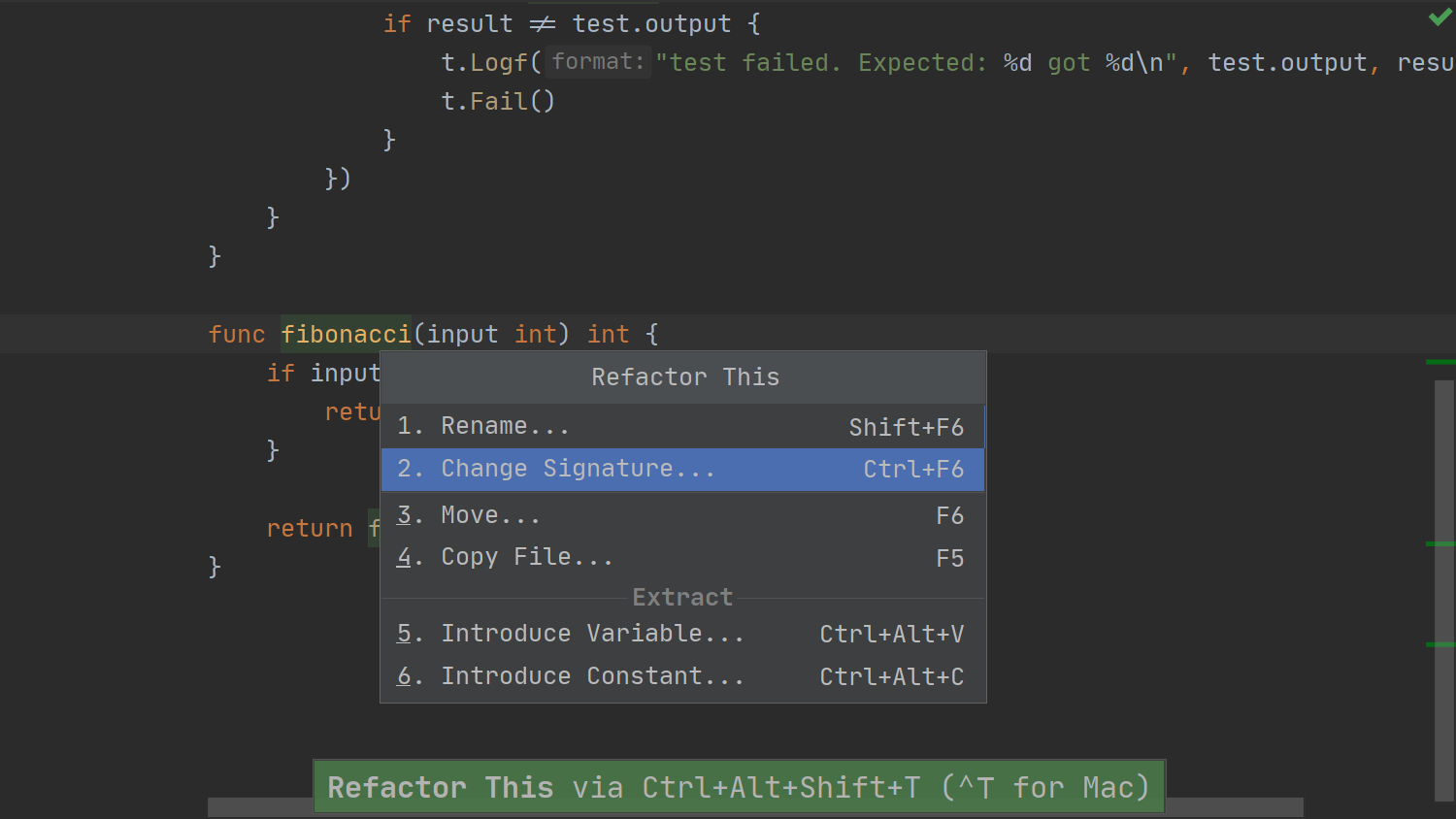 Then, let’s do a bit of renaming and cleanup: 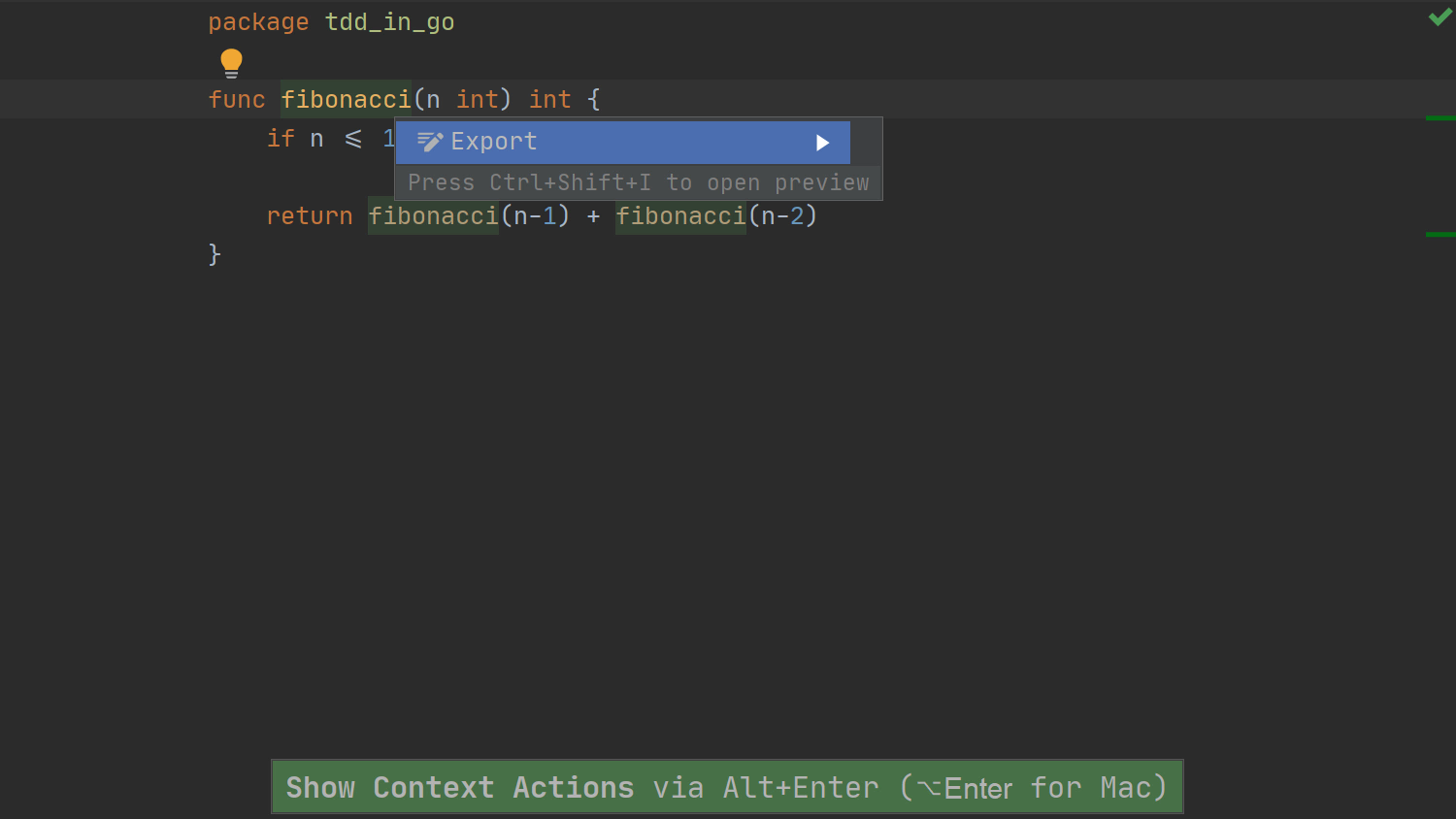 Throughout these refactorings, we can see that the tests still pass, which hopefully increases our trust in the automated refactorings that the IDE performs on our behalf.

This concludes our short article on how to use GoLand for TDD in Go, and beyond. Please share your feedback in the comments section below, in our issue tracker, or tweet us at @GoLandIDE.

GoLand has a lot of features, and it can be overwhelming at first. The trick is to remember the most important IDE actions and shortcuts, and the rest will follow.   To help you, we have created the Learn GoLand section on the Welcome screen. It contains several interactive courses, meaning you can try out the features with the code yourself following the instructions. The Learn GoLand section is updated regularly. Recently we added the Onboarding Tour, a brief overview of the main features, which we think are especially useful to know about if you are coming from another IDE o

Let's look at the workflow of incrementing the major version of a module using the module definition taken from our What's New in GoLand repository: module renameab.le/module go 1.11 Upgrading a module means bumping the version tag in version control. We also need to change our import paths. For example, if to bump the module version from `v1` to `v2`, we need our imports changed from: "renameab.le/module/pkg/log" to "renameab.le/module/v2/pkg/log" Obviously, this can appear in lots of places in the code. Good news: the IDE can do this for you. With the 2021.1 version of

How to Use go:embed in Go

One of the most anticipated features of Go 1.16 is the support for embedding files and folders into the application binary at compile-time without using an external tool. This feature is also known as go:embed, and it gets its name from the compiler directive that makes this functionality possible: //go:embed. With it, you can embed all web assets required to make a frontend application work. The build pipeline will simplify since the embedding step does not require any additional tooling to get all static files needed in the binary. At the same time, the deployment pipeline is predictable