As Java 9 continues to evolve, so does IntelliJ IDEA’s support for it. This screencast shows the new features to support Java 9 development in the upcoming IntelliJ IDEA 2017.2 release.

In the rest of this blog post we’ll break down what’s in the video and talk about each feature.

As you’d expect, a lot of the improvements are to support the Java Platform Module System. One of the new features to help developers getting up to speed with Jigsaw and Java modularity is the new Java Module Diagram. This diagram shows the modules you’ve defined in your project in green; any automatic modules (those modules that are dependencies on traditional jar files) in blue; and any JDK modules in yellow.

These diagrams give a clear picture of which modules have been defined and which modules they depend upon, and can help you either to create a clean separation when creating a modular system, or simply visualize what’s going on with the new Java Platform Module System.

If you are working with Java 9 modules, you’ll see code completion and generation has been improved for the module-info.java file. For a start, the generated module name more closely matches the IntelliJ IDEA module name.

Errors and warnings and their suggested fixes have also been improved. For example, if you try to use opens in a module that is already open , the error is clear and you can opt to either remove the opens statement or change the module so it’s no longer open.

Duplicate opens or provides statements are detected and can be deleted or merged.

You can also use find usages on a module name to locate other places that use this module, including JDK modules that use it. 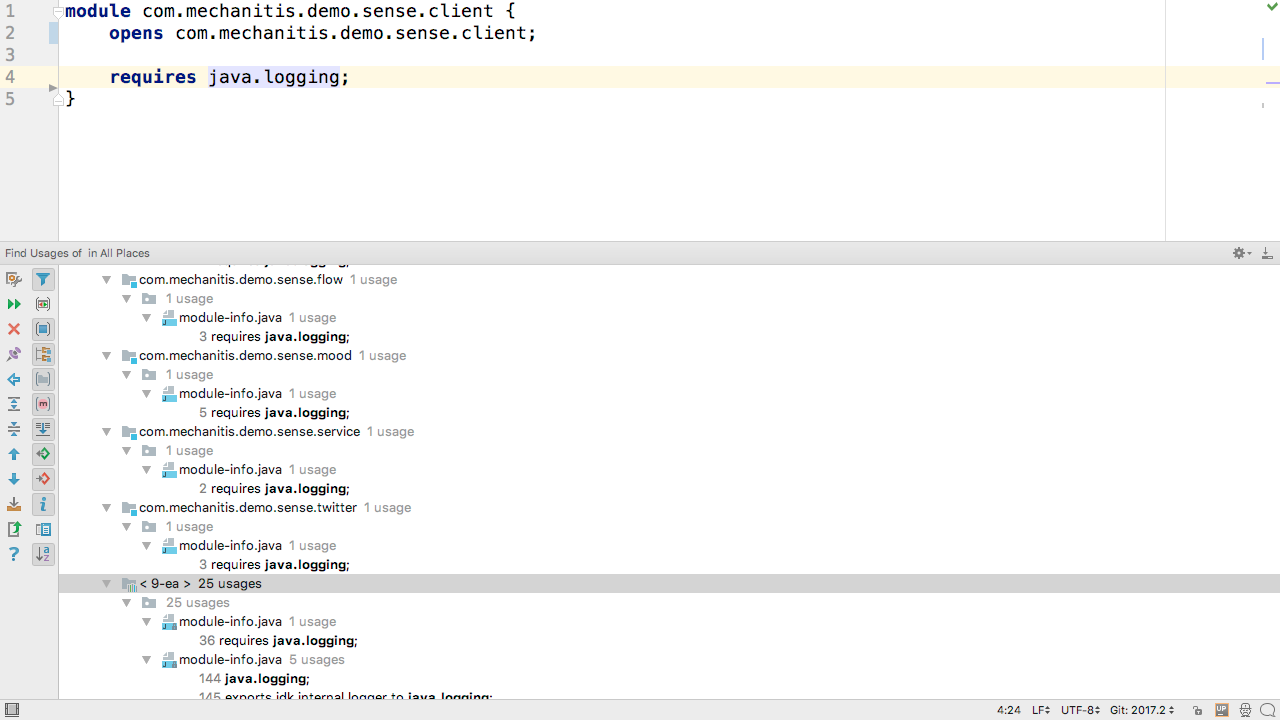 And, of course, you can refactor module-info files, for example using rename.

Project Jigsaw has a wider impact than just allowing you to create your own modules.  Modularity impacts the visibility of packages, so classes that were previously accessible may not be any more. This even includes reflection. IntelliJ IDEA’s inspections can help locate reflection code that tries to access modules that are not on the module path, and offers suggestions to fix the problem.

There are a few new inspections to help migrate code to Java 9. There’s a section under the Java language level migration aids inspections for Java 9. 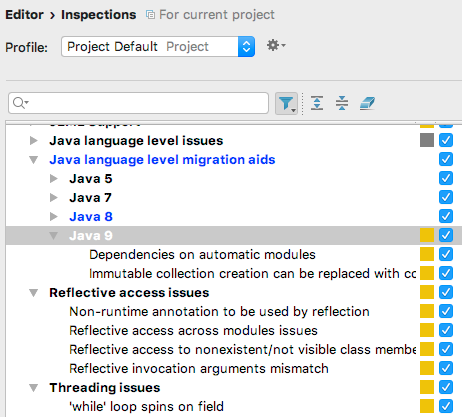 The second inspection points out places where we can use the new Collections Factory Methods. For example, if we’re creating an unmodifiableSet, this verbose code can be enormously simplified in Java 9. We can also convert unmodifiableList to the new syntax too.

There’s one final inspection to help us make use of new Java 9 features. If your code has while loops that wait for a particular value to change, they can be updated to add the new onSpinWait hint, which allows the runtime to potentially optimize this operation.

Finally, IntelliJ IDEA is also ready for the updates to Javadoc in Java 9. Generated Javadoc is now searchable, letting developers search for classes, methods or keywords in the documentation. To make the most use of this, you may want to add an index tag to your documentation to provide keywords to the search.

2017.2 java 9 Jigsaw
Git Questions – How and When do I Merge or Rebase?IntelliJ IDEA 2017.2 is Here: Smart, Sleek, and Snappy
Comments below can no longer be edited.

We’ve just released a new minor update for IntelliJ IDEA v2021.3.  You can update to this version from inside the IDE, using the Toolbox App, or using snaps if you are an Ubuntu user. Also, you can download it from our website. Here is the list of the most important fixes that you’ll find in this update:  For more details please refer to the release notes. Please feel

We’ve just released the first minor update for v2021.3. Download IntelliJ IDEA 2021.3.1 from our website, update via the Toolbox App or from inside the IDE, or use snaps (on Ubuntu) IntelliJ IDEA 2020.3.3 introduced the concept of trusted projects to mitigate the risks associated with opening projects from unknown and untrusted sources. With v2021.3.1 we’ve changed the behavior and implem

We’ve just released IntelliJ IDEA 2021.2.4 with several valuable fixes. To download this version, visit our website, update your version using the ToolBox App or from inside the IDE, or use snaps if you are an Ubuntu user.IntelliJ IDEA 2020.3.3 introduced the concept of trusted projects to mitigate the risks associated with opening projects from unknown and untrusted sources.With v2021.2.4, we’

IntelliJ IDEA 2021.3, our final release of 2021, is now available! Download it from our website or via the Toolbox App. You can also upgrade to this version inside the IDE or via snaps if you use Ubuntu. In this release, we’ve delivered new features and quality enhancements to improve the IntelliJ IDEA user experience. Quality-wise, we’ve paid close attention to the feedback you’ve been giv