One of the interesting features of Java 9 is support for Multi-Release JAR Files.  What does this mean?  In the past, library developers had three options when it came to supporting newer versions of Java:

None of these approaches is particularly fun for the library developers or their users.  They either involve a lot of work, or they alienate/confuse users, or the libraries don’t get to make use of new features (and therefore don’t provide much incentive for their users to upgrade their version of Java either).

As of Java 9, there’s an alternative.  Now, a library developer can release a single JAR file that:

This works for Java 9 onwards – so these multi-release JAR files will support a Java 9 version, a Java 10 (or 18.3), 11, 12 version etc… but anything before Java 9 is lumped into “pre-Java 9”.  This is a little bit sad since obviously Java 8 had some nice features that you might want if you’re running Java 8, but the pre-Java-9 support for a library might target 6 onwards like a lot of libraries still do.  The reason for this split, of course, is that Java 8 itself can’t decide what to do differently when it runs a multi-release JAR file because the functionality only became available in Java 9.

I’m going to create a really simple application that just outputs the current stack trace (you’ll see why I’ve chosen this example later).  My project consists of a Main class, an interface to define what I might be interested in about the stack, StackInfo, and an implementation of this interface, StackParser:

If you look at the specification, you’ll see that what you need is an output structure that looks something like this:


Basically, you have a standard JAR file with all the classes from your application in the root like usual, and an additional “versions” folder in META-INF with specific implementations for each of the additional supported versions of Java (in this case, just Java 9).  This “9” folder only needs to contain the class files for those classes with specific Java 9 features.  If a class is not in there (e.g. C.class) the default version will be used.

In my project structure, I’m going to set Java 8 as my default, since this is what I want the application to be compiled against in the normal case. 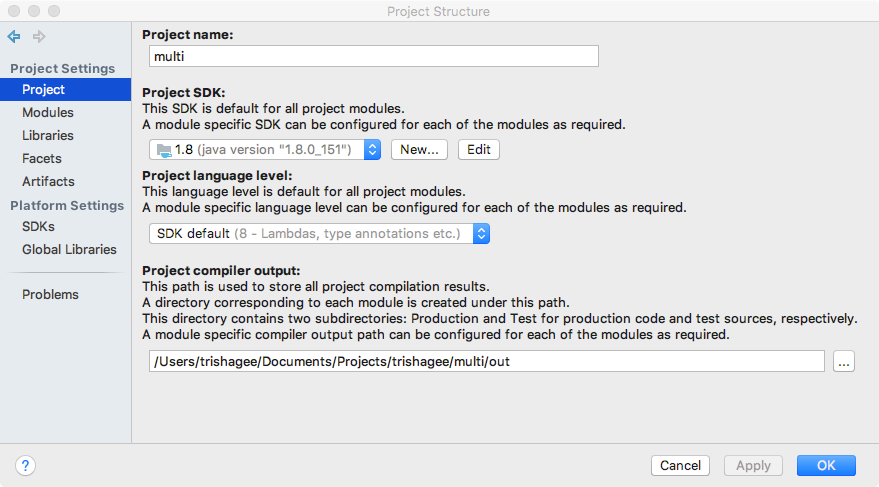 If I look at the settings for my root project, I should see this is using the default SDK, Java 8. 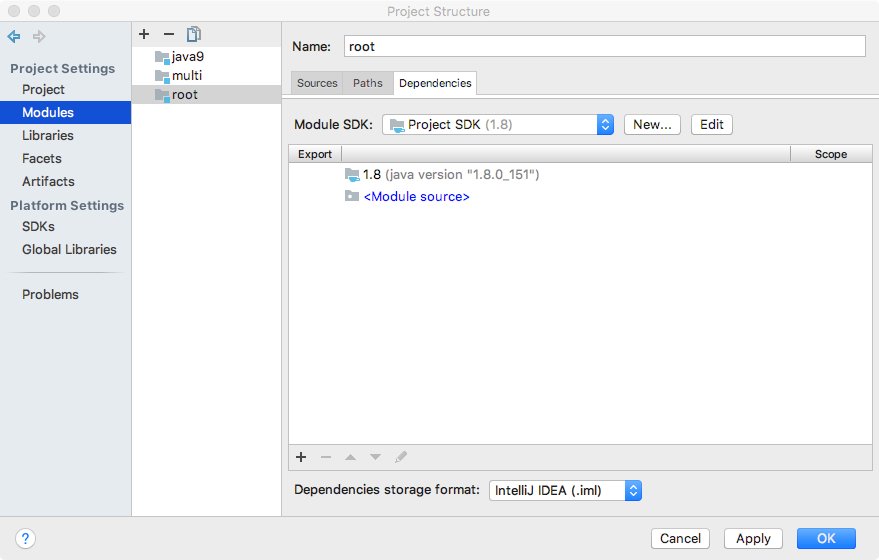 Now I need to go into my java9 module and make sure this is set to compile against JDK9. 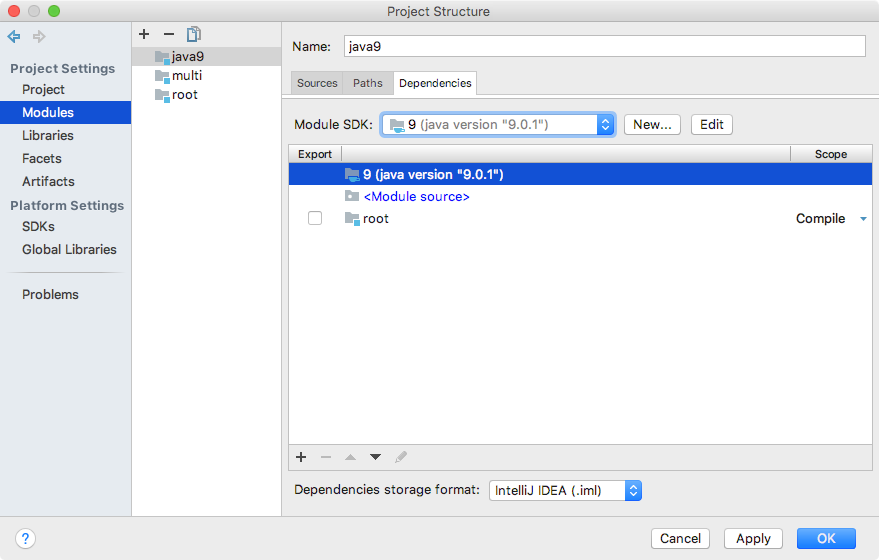 I have also added a dependency upon the root module in this java9 module.  The reason for this is that the root project contains all the project code, whereas the java9 module only contains classes that need to be compiled against Java 9. These classes may need to refer to other classes in the application, so we’ll depend upon the root project to get access to these other classes.

Now I create a Java 9 implementation of the StackParser .

Now you see why I chose this example – in Java 9 there’s a new StackWalking API which makes it much easier (and usually more efficient) to get information about the stack. The specification for Multi-Release JAR Files states “Every version of the library should offer the same API” – this means that really you should only use Java 9 for implementation details, not for providing a different API to the user.  The fact that you’re using Java 9 features will be invisible to the user.  Whether library developers will follow this or not remains to be seen.  But for our example, we’re going to have exactly the same API for both the Java 8 and Java 8 versions (both StackParser classes implement StackInfo ) but the Java 9 version uses Java 9 features in its implementation.

Note that these two classes are called the same thing and are in the same package.

Remember that there’s a very specific structure to the classes in the JAR file, so we’re going to use this structure for our compiler output.  We ultimately want something that looks like:


Our root project can be compiled to pretty much wherever we like, as long as we know where that is.  I have my project set up like this: 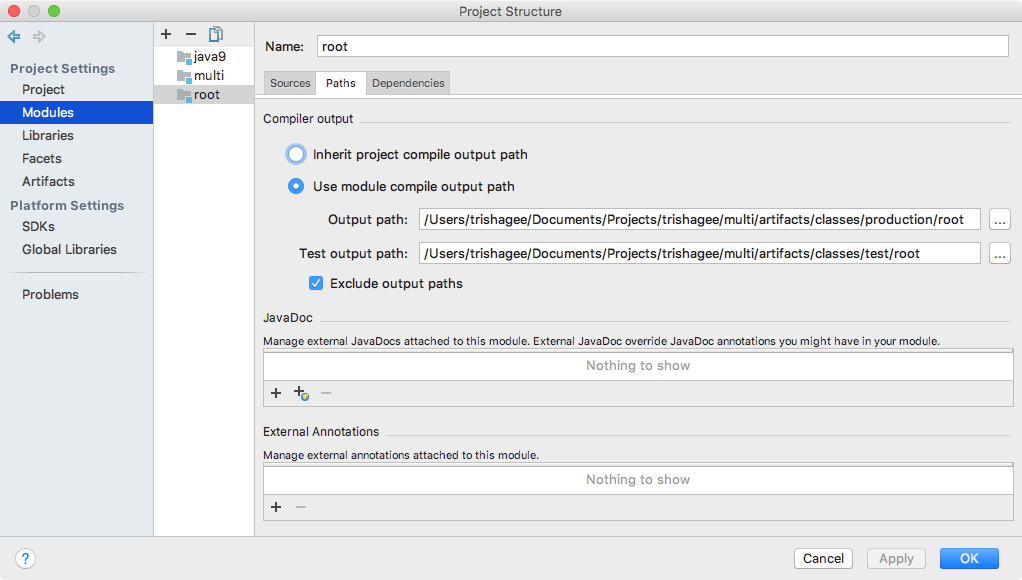 My root module compile output path is set to 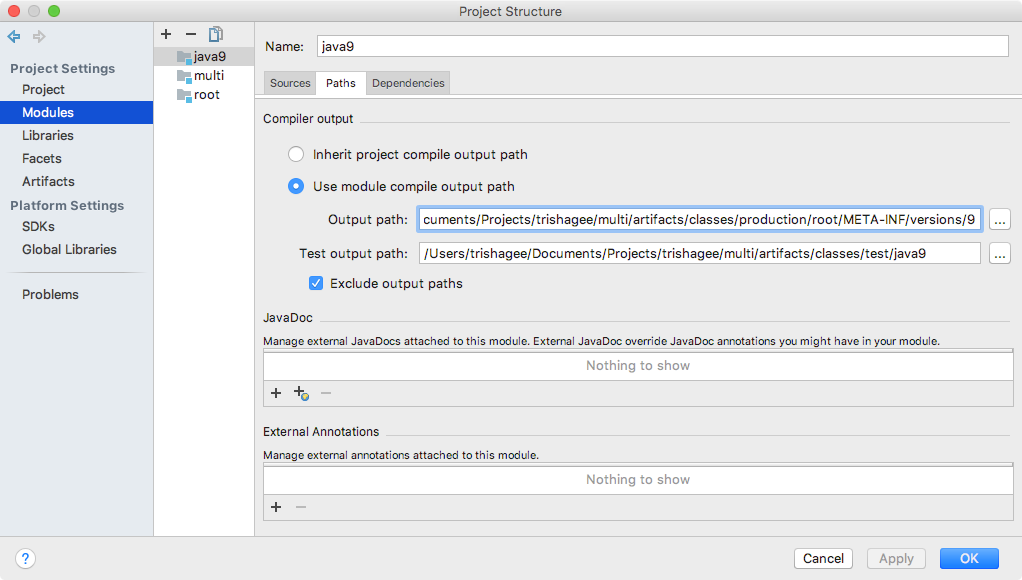 I have the java9 module output path set to

Now when you build the whole project, everything should compile as you expect, and you should see the output in the artifacts directory: 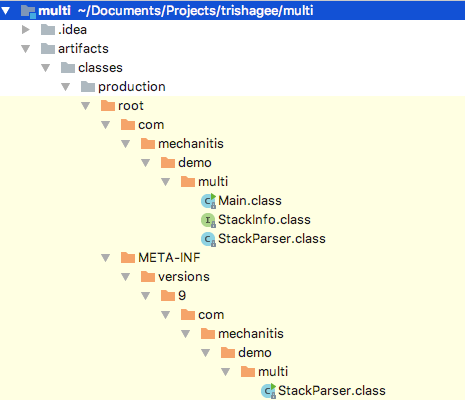 When I open up the StackParser class in the root, I see it was compiled with Java 8:

And if I open the one in the 9 folder, I can see it was compiled with Java 9. 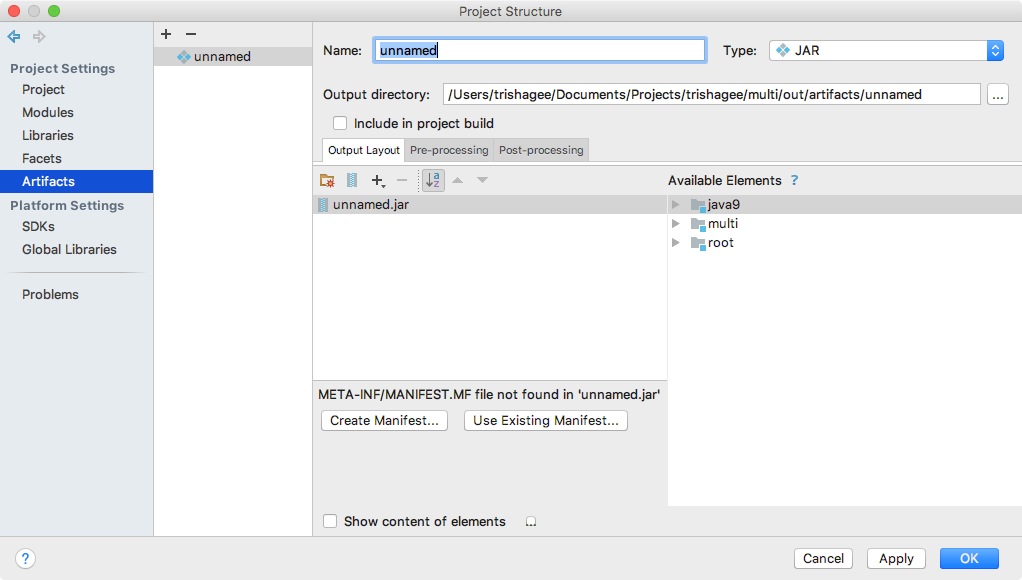 I’m going to change the name to “multi-release”, then right-click on “root” in available elements and select Put Into Output Root.

I do the same thing with the java9 module as well. I’m going to change the destination folder of the JAR file because I’d prefer to have it in a different location, but that’s not important to the process (as long as you remember where it’s going to be output).  I set my output path to

Then I click on multi-release.jar and press the “Create Manifest” button. 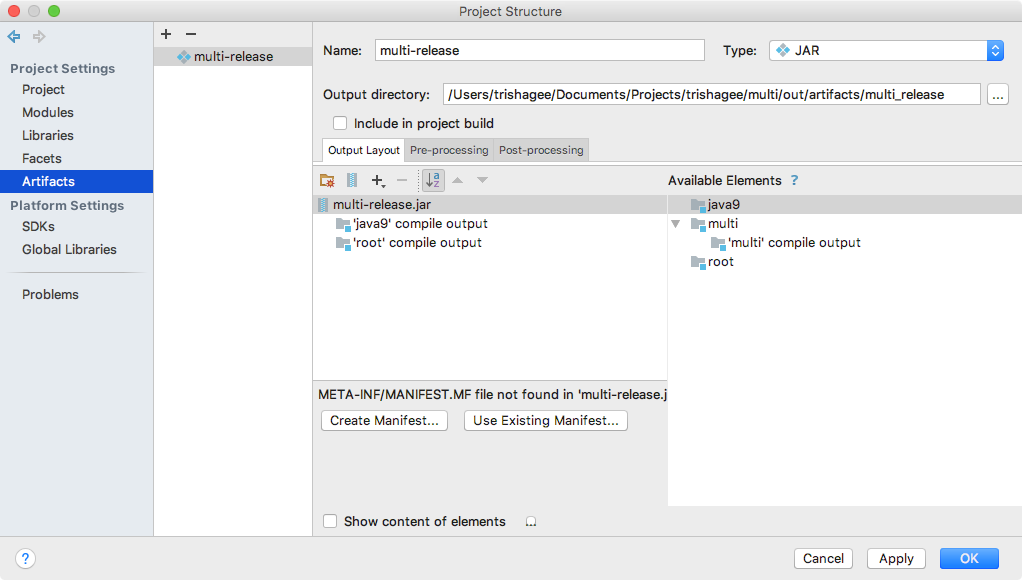 I’m going to select the root module as the location for this ([project home]/root), and IntelliJ IDEA creates a META-INF folder here with a MANIFEST.MF file.

Now I can press OK to save all these settings.

Next up, I go into the MANIFEST.MF file and make a couple of changes:

This last line is the most important one.

Finally, from the Build menu, I choose Build Artifacts… and select “Build” under multi-release.jar. I should now see the JAR in my chosen output directory 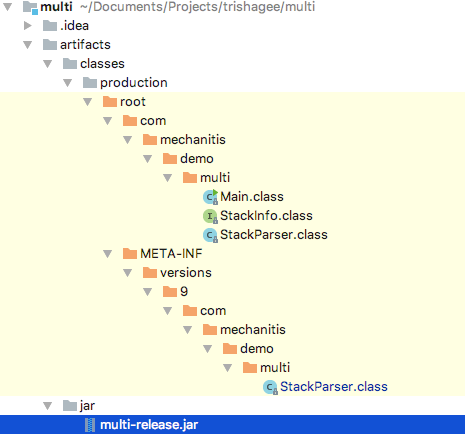 Finally, let’s see this JAR file in action.  Firstly, I have a terminal set up to run Java 8.  When I run the jar file from here, I get the Java 8 implementation:

Then in a second terminal set up with Java 9, running exactly the same JAR file gives me the Java 9 implementation.

The code for this example is on GitHub.