IntelliJ IDEA 2018.1 comes, as usual, with a lot of features to support developers who use Spring and Spring Boot. We also now have an OpenAPI for Spring Boot, which allows third party plugins to re-use, integrate with or extend the existing Spring Boot support in IntelliJ IDEA.

Spring Boot web applications are now easier to test and debug.  Methods annotated with @RequestMapping or @GetMapping now have gutter icons that let you use the new REST client to make an HTTP request to the given URI.

In order to enable this, you must have a dependency upon the Spring Boot Actuator library, and the application also needs to be running:

To test a POST request, select “Open in HTTP Request Editor”, which opens a new scratch file with the appropriate URL.  Changing the values in this scratch file lets you try out the request with different values. You can see not only the output, but the header values, response code, time taken and other useful  information about the response.

Methods annotated with @GetMapping also give the option to open this URL in the browser.

Check out the documentation for this feature.

Navigating through Bean declarations is now easier in IntelliJ IDEA 2018.1.  Previously, the IDE showed all the beans in the Run Dashboard.  This functionality has now been extended so you can navigate through the beans from within the editor – there are new gutter icons that show the beans that are relevant for the current class.  Where appropriate, you can see where this class is injected and which beans it depends upon.

This feature also needs you to have the application running in order to work.  Also, it only shows the beans that are registered in the running context.

IntelliJ IDEA 2018.1 has added the ability to rename caches.  From cache annotations like @CacheEvict, @CachePut and @Cacheable, it’s possible to rename the cache and IntelliJ IDEA will make sure all uses of that cache are updated to the new name.

As you can see from the example above, this works not only with Java, but also Kotlin.  Similarly, you’ll get SpEL code completion now for @Cacheable, @CacheEvict and @EventListener annotations when you’re using Kotlin.

A lot of work has gone into improving support for configuration files and improving and expanding auto configuration. You’ll notice better performance, better code completion and suggestions, better organisation of suggestions, and, of course, bug fixes too.

Another area that benefits from improved performance is diagrams.  Large graphs and Spring diagrams in IntelliJ IDEA 2018.1 perform faster and use less memory.

If you’re running an application with Devtools enabled, there’s a new “Update” action which can trigger an application restart.  You can configure what happens when you perform the update in the Run Configuration: 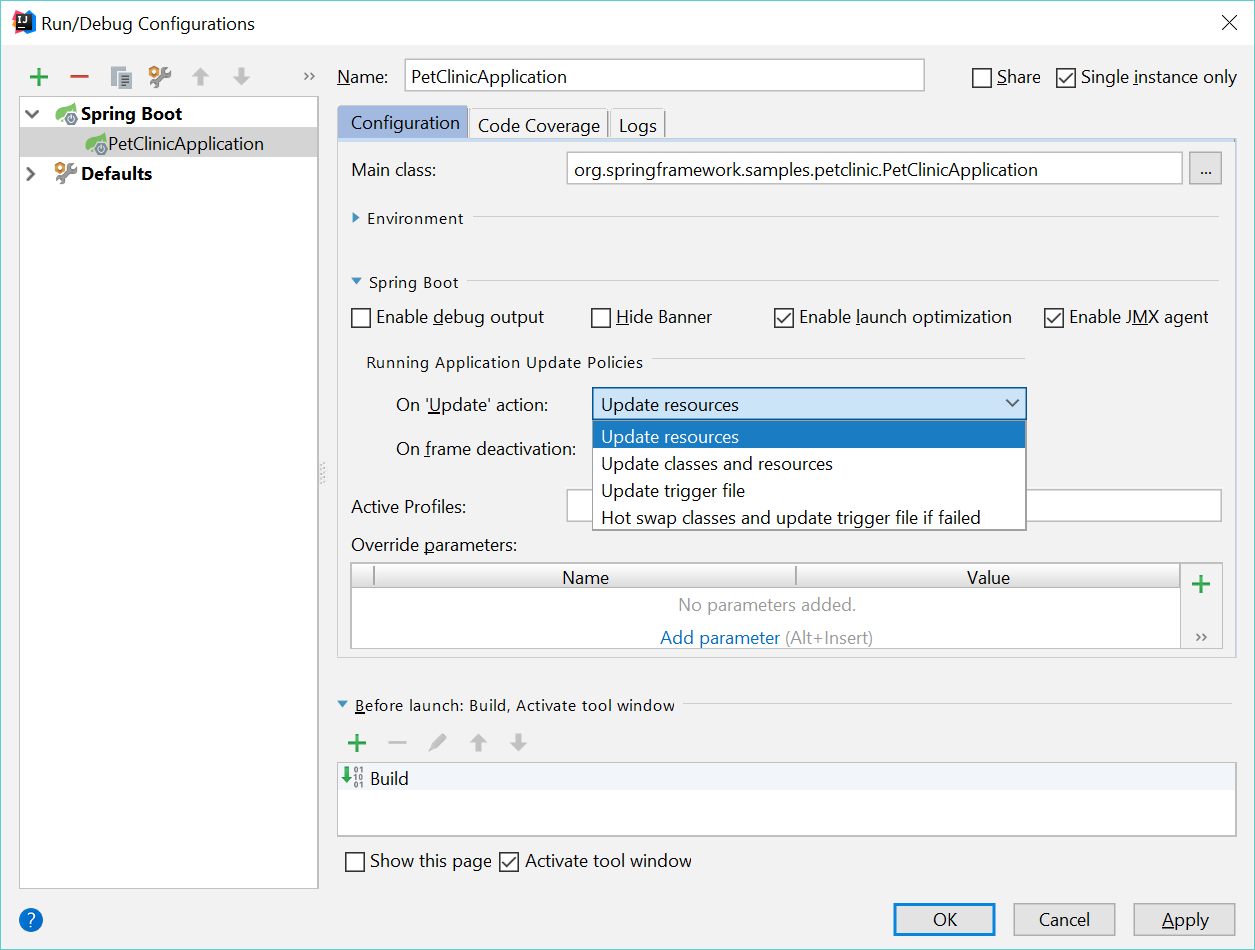 The following policies are available:

If you select either of the last two options, IntelliJ IDEA sets a trigger file when you start the application (it’s the equivalent of adding the VM option -Dspring.devtools.restart.trigger-file=.restartTriggerFile) 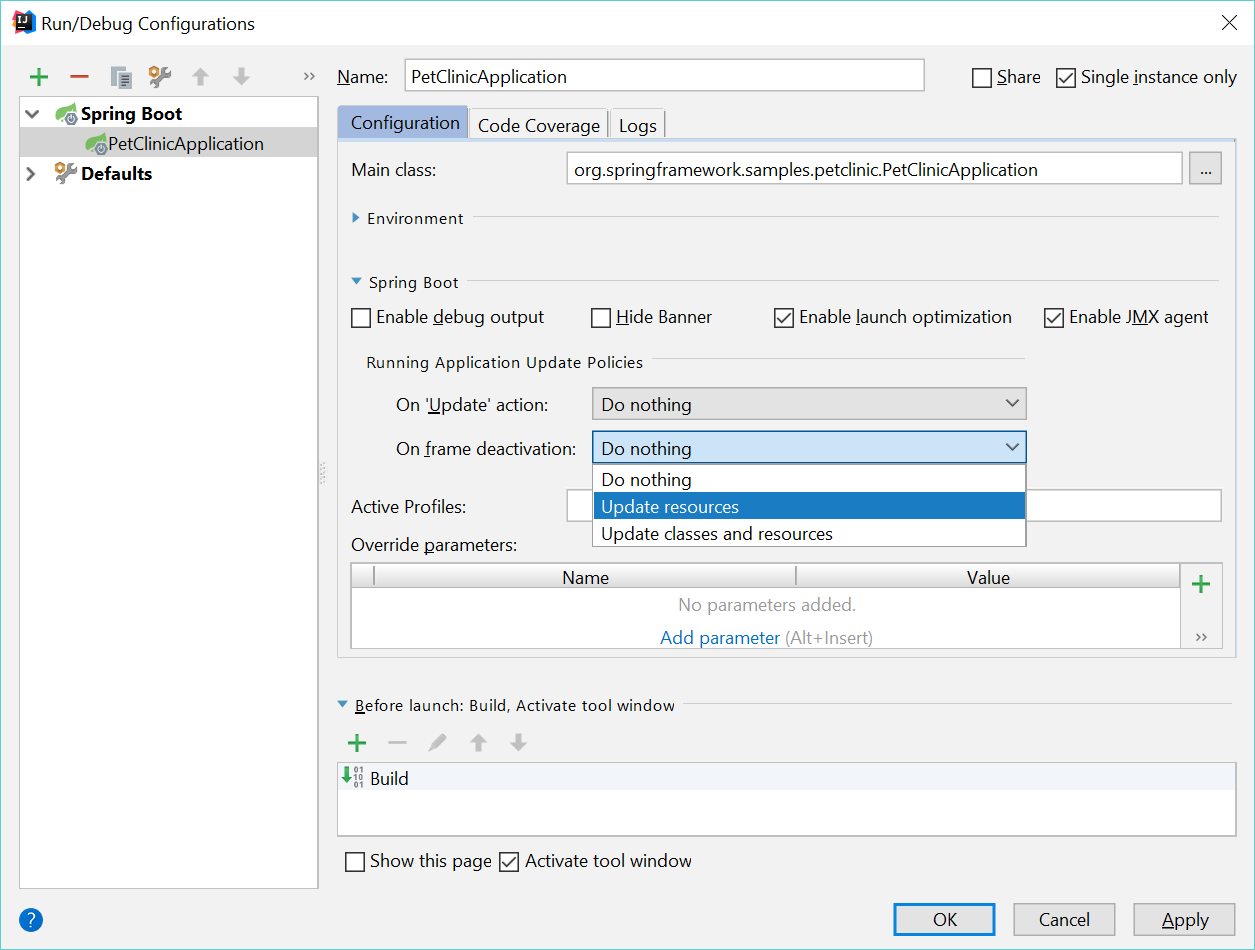 Spring Security 5.0 introduced support for Spring Framework 5, but also a number of new features and bug fixes. It is completely supported in IntelliJ IDEA 2018.1.

IntelliJ IDEA 2018.1 has full support for the latest version of the Spring Framework and Spring Boot, improved performance when using these, and a new API to help third party developers provide tools for working with Spring Boot.

More information about all the new features and bug fixes can be found in YouTrack.

The third bug-fix update for v2022.2 is now available.

We’ve just released the second bug-fix update for v2022.2! Learn about the latest fixes and improvements in this blog post.