Kotlin 1.0 Released: Pragmatic Language for the JVM and Android

It’s been a long and exciting road but we’ve finally reached the first big 1.0, and we’re celebrating the release by also presenting you with the new logo: 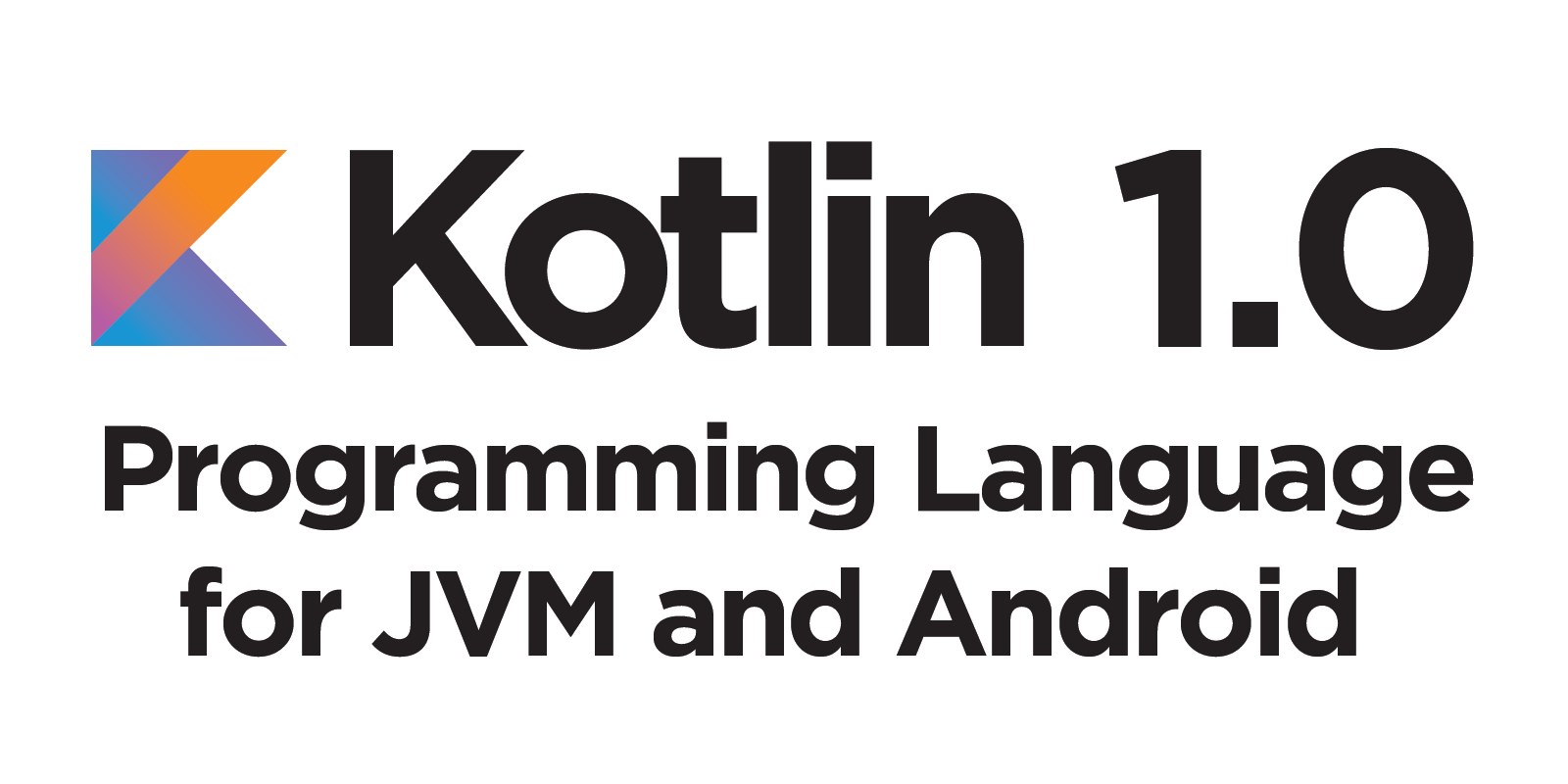 Kotlin is a pragmatic programming language for the JVM and Android that combines OO and functional features and is focused on interoperability, safety, clarity, and tooling support.

Being a general-purpose language, Kotlin works everywhere where Java works: server-side applications, mobile applications (Android), and desktop applications. It works with all major tools and services such as

One of the key areas of focus for Kotlin has been interoperability and seamless support for mixed Java+Kotlin projects, making adoption easier leading to less boilerplate code and more type-safety. Additionally, Kotlin has an extensive standard library that makes everyday tasks easy and smooth while keeping the bytecode footprint low. Of course, any Java library can be used in Kotlin, too; and vice versa.

What does pragmatic mean?

Understanding its core values is crucial for any long-running project. If I were to choose one word to describe Kotlin’s design, it would be pragmatism. This is why, early on, we said that Kotlin is not so much about invention or research. We ended up inventing quite a few things, but this was never the point of the project. Of course we were building a type system that prevents bugs, and abstraction mechanisms that facilitate code reuse, as anybody in our position would. But our (pragmatic) way of doing it was through focusing on use cases to make the language a good tool.

In particular, this approach led us immediately to the notion that interoperability with existing code and infrastructure is crucial. Re-writing the world the right way, all from scratch — who’s never wanted to? I have, quite a few times :) And Kotlin would have been a whole lot easier to design and develop if not for the Java interop, Maven integration, and Android compatibility! It would definitely be more elegant in many ways. But elegance, though highly appreciated, is not the primary goal here – the primary goal is being useful. And the less our users have to relearn, reinvent, redo from scratch, and the more they can reuse, the better.

— So, why doesn’t Kotlin have its own package manager, or its own build system?
— Because Maven and Gradle already exist, and reusing their huge number of plugins is crucial for many projects.
— Why did we invest a lot of time and effort into making JDK-compatible collection interfaces, when it was so much easier to just redesign collections from scratch?
— Because tons and tons of Java code work with JDK collections, and converting data on the boundary would be a pain.
— Why does Kotlin support Java 6 bytecode?
— Because many people are still running Java 6 (Android, most notably, but not only).

For us, pragmatism is about creating a user experience, not a language or a library alone. Many of the language design decisions were made under constraints like “Won’t this impede incremental compilation?”, “What if this increases APK method counts?”, “How will the IDE highlight this as you type?”, and many more like these. As a result, we are proud of our tooling as well as the language.

Is it mature enough and ready for production?

In fact, one of the reasons it took us a long time to reach 1.0 was that we paid extra attention to validating our design decisions in practice. This was and is necessary, because the compiler will be backward-compatible and future versions of Kotlin must not break existing code. As such, whatever choices we’ve made, we must stick to them.

Reaching this milestone was something we couldn’t have done without the valuable help of our early adopters. We want to thank each and every one of you for your courage, energy, and enthusiasm!

First and foremost, Kotlin is an Open Source language

JetBrains is the main backer of Kotlin at the moment. We have invested a lot of effort into developing it and we are committed to the project for the long run. We wrote it out of our own need to use in our own products. And we’re happy to say that to date, close to 10 JetBrains products, which include IntelliJ IDEA, JetBrains Rider, JetBrains Account & E-Shop, YouTrack as well as some of our smaller IDEs and some internal projects are using Kotlin. So it’s here to stay!

Since 2012 we’ve kept Kotlin’s development very open, talking to the community all the time and gathering and addressing lots of feedback.

Moving forward, we are planning to set up a centralized venue for design proposals and discussions, to make the process even more visible and organized. Standardization efforts have not been started for Kotlin so far, but we realize that we’ll need to do it sooner rather than later.

Language design and overall steering of the project is done by the team employed at JetBrains. We currently have over 20 people working full time on Kotlin, which is yet another testament to JetBrains’ commitment to Kotlin.

Let’s take a look at some numbers:

Talking about lines of code, the number of these in open repositories on GitHub is growing exponentially, JetBrains’ projects excluded: 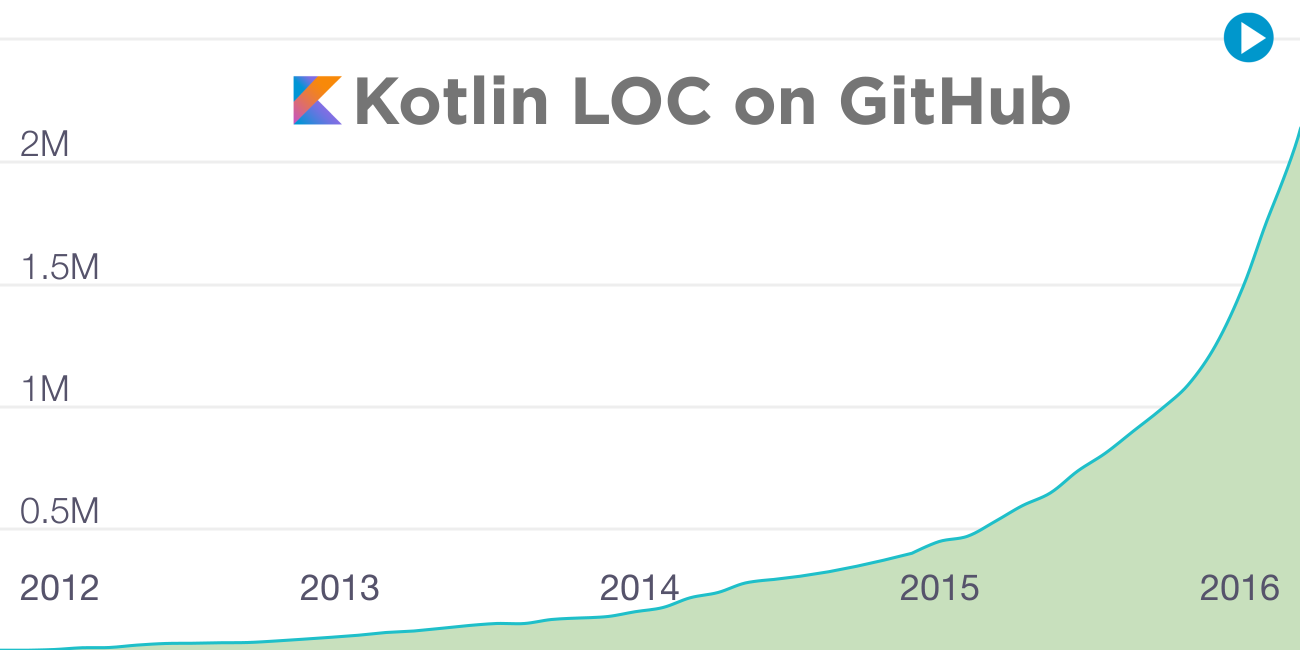 And of course we have a growing list of companies using Kotlin, including Prezi and Expedia. By the way, if you’re using Kotlin, make sure to send us a Pull Request.

As of 1.0, we are committed to long-term backward compatibility of the language and its standard library (kotlin-stdlib):

This applies to JVM/Android support only. JavaScript support remains experimental for now and will have its own release later on.

As for the plans, our nearest goals are (apart from bug fixes):

The easiest way to play with the language is through its online mini-IDE: try.kotl.in, including Kotlin Koans — a set of introductory problems that guide you through the basics of the language.

To use Kotlin on your machine (including completing Koans offline), use one of these IDEs:

NOTE: If you are running an older version, you may need to update your Kotlin plugin to 1.0.

To help you get up to speed with Kotlin’s concepts, language docs and tutorials are available from the official web site. Great articles and presentations given by members of our community can be found in the Digest of 2015.

If you’re introducing Kotlin to your Java project, you can make use of the Java-to-Kotlin converter that is built into the IDE, helping migration easier class by class.

Last but not least, make sure you join the discussions on our Forum or Slack.

Once again, we want to thank everyone. We couldn’t have done this without the community.