PyCon 2019, Cleveland…heck of an event and kudos to Ernest Durbin for a most memorable edition in his delightful city.

We at PyCharm did some memorable things at PyCon, with some weird ideas that turned out nicely. Some time has passed: let’s do a retrospective.

In a nutshell, we got a bigger booth and invited some of the major Python content creators to share one side.

Where did this idea come from? At the previous PyCon, we were in a HumbleBundle with some of them, did an open space, and dang if a good audience didn’t show up. And not just for one of us, but for the collection. We started to think we were a “we” and should consider expanding on it next time…one of those oddball ideas that never goes anywhere.

We started talking to some of the content creators — Michael Kennedy was key in helping assemble the invasion force — and checked with PyCon about a bigger space. My colleague Ernst Haagsman (PyCharm Product Marketing Manager) came up with a nearly-perfect booth design, to include a mini-theater for all of us to give “PyCon Reject Talks” and a shared one-on-one bench-style space.

We clicked send on the bigger spot and the booth, got a “yes” from some wonderful content creators…it was a go on “The Big Tent.” 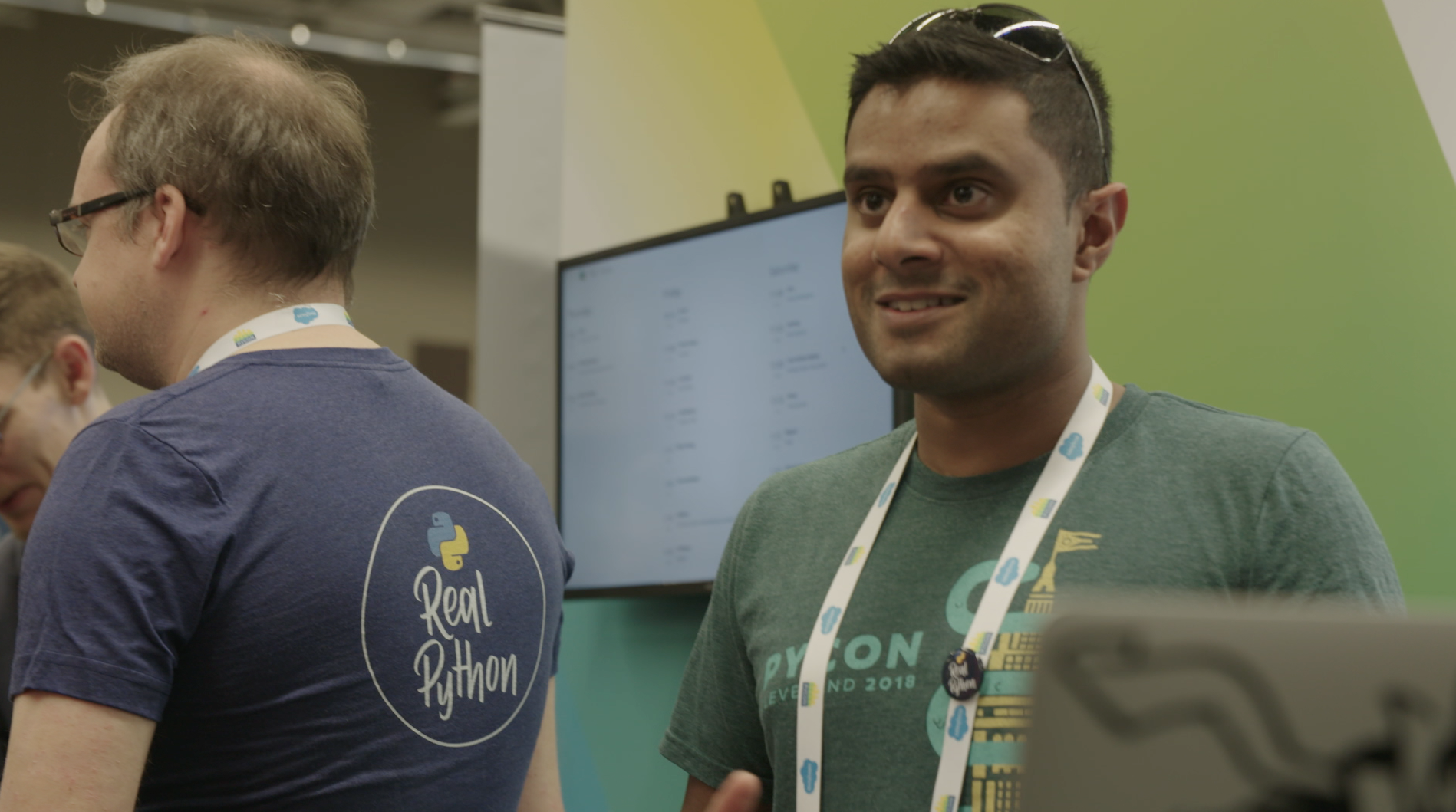 We had a story to tell, but lots of people do, and it’s hard to capture attention and get a story across. This is where a “stronger together” narrative started to form. Each of us individually had a compelling story, but weren’t big enough to get it through. We needed each other to amplify…each other.

We arranged a series of announcements, from each of us, re-announced by the others, and covering activities that we each planned to do. Turned out to be a lot to announce.

The first event at PyCon: I did a “42 PyCharm Tips and Tricks” workshop immediately preceding the opening reception. With a twist: each tip had a page with a full writeup, a narrated video, and links to related material.

Because Michael and Matt Harrison had a special announcement — the reveal of their Effective PyCharm book — we used the last 10 minutes for them to show some tips and discuss what they were doing.

PyCon’s opening night reception is a lot of fun: part kickoff, part celebration. We used the booth’s mini-theater for two scheduled activities: Michael and Matt did a session announcing their book (and doing some sales) and Brian Okken recorded a live version of his Test&Code podcast by walking around and interviewing people. Turned out quite well and he had it out the next morning. 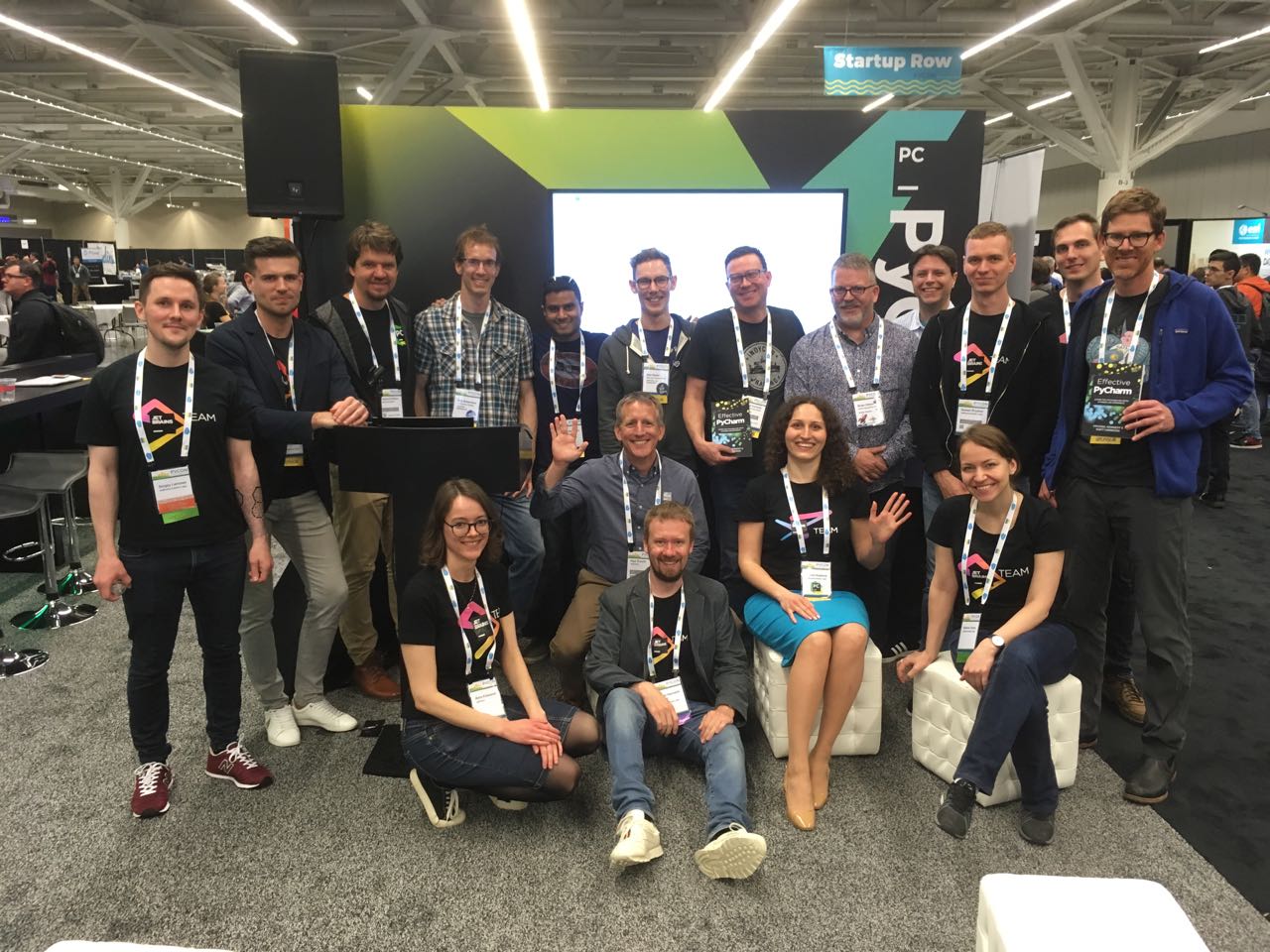 This was the central idea of “The Big Tent”: shared booth space for the important names creating content in the world of Python. Michael Kennedy of Talk Python To Me, Brian Okken of Test & Code, Dan Bader and gang from Real Python, Matt Harrison from MetaSnake, Bob Belderbos and Julian Sequeira from PyBites, Cris Medina from tryexceptpass, and Miguel Grinberg.

The idea: you don’t want the hassle of a dedicated booth. Instead, takes slots at a stand in our booth, use our theater and one-on-one area, and we’ll make nicely-designed artwork you can swap in while you’re in the stand. We did this doubling our booth footprint and carving out a quarter for two stands. 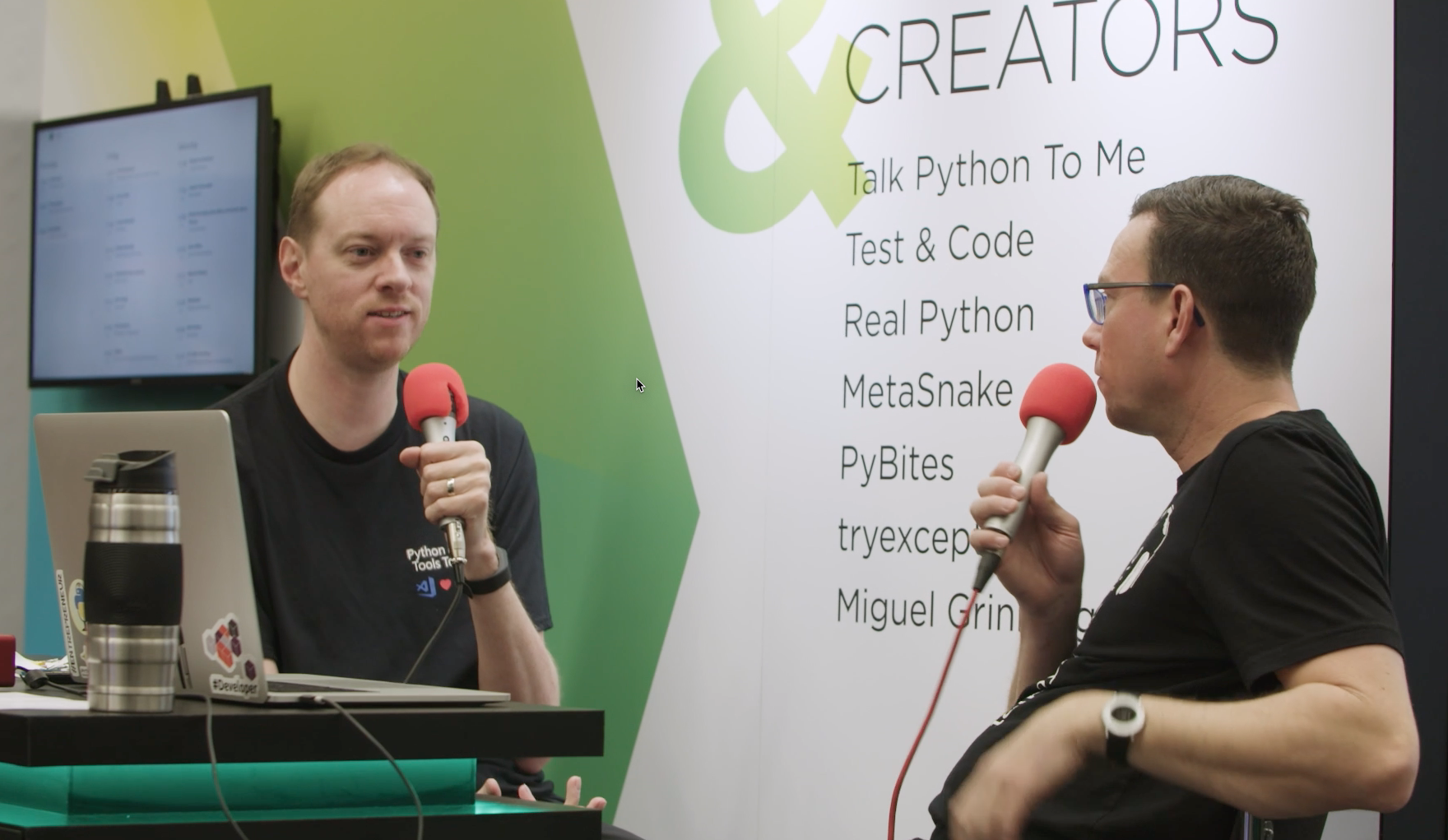 It worked quite well and we had a really nice symbiosis between the content creators part and the PyCharm part. And let’s be honest: those folks are rock stars and had a lot of traffic. Win-win. 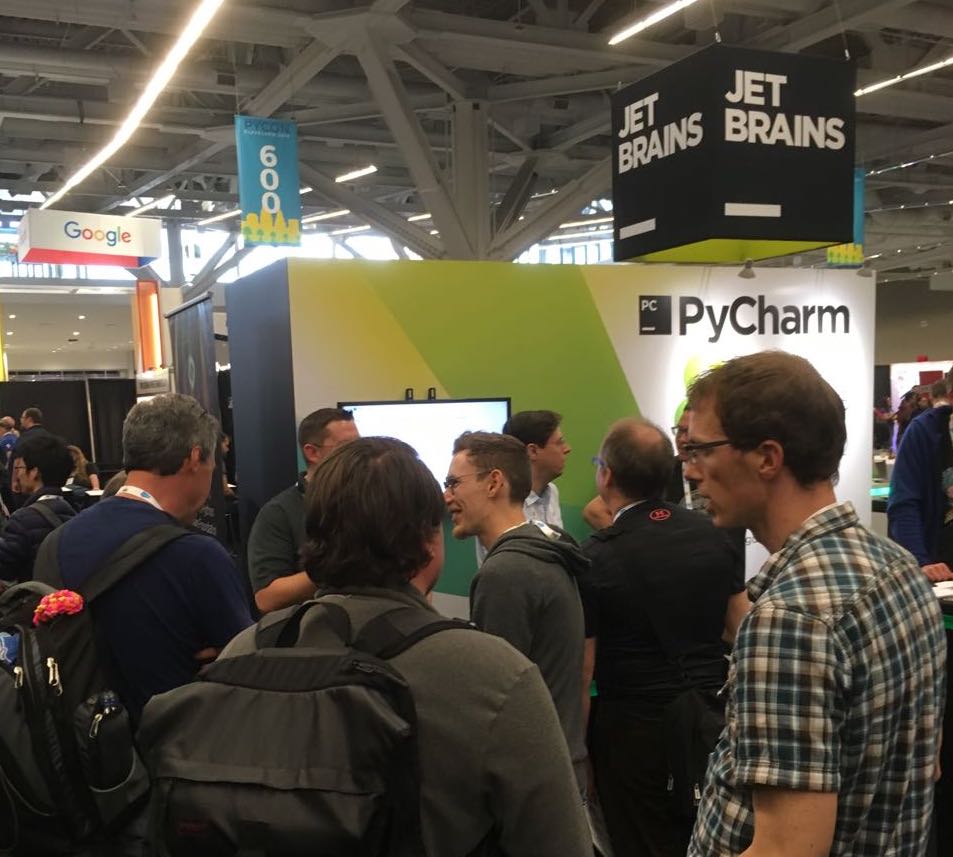 The content creators area was a big hit. Also big: the mini-theater that Ernst came up with:

With seating for around 7 people but standing capacity (due to being on an aisle corner, by the snack seating) for 30 more, we had a display and some speakers to give a small place for presentations. Which we scheduled in advance: 24 over two days plus the reception. 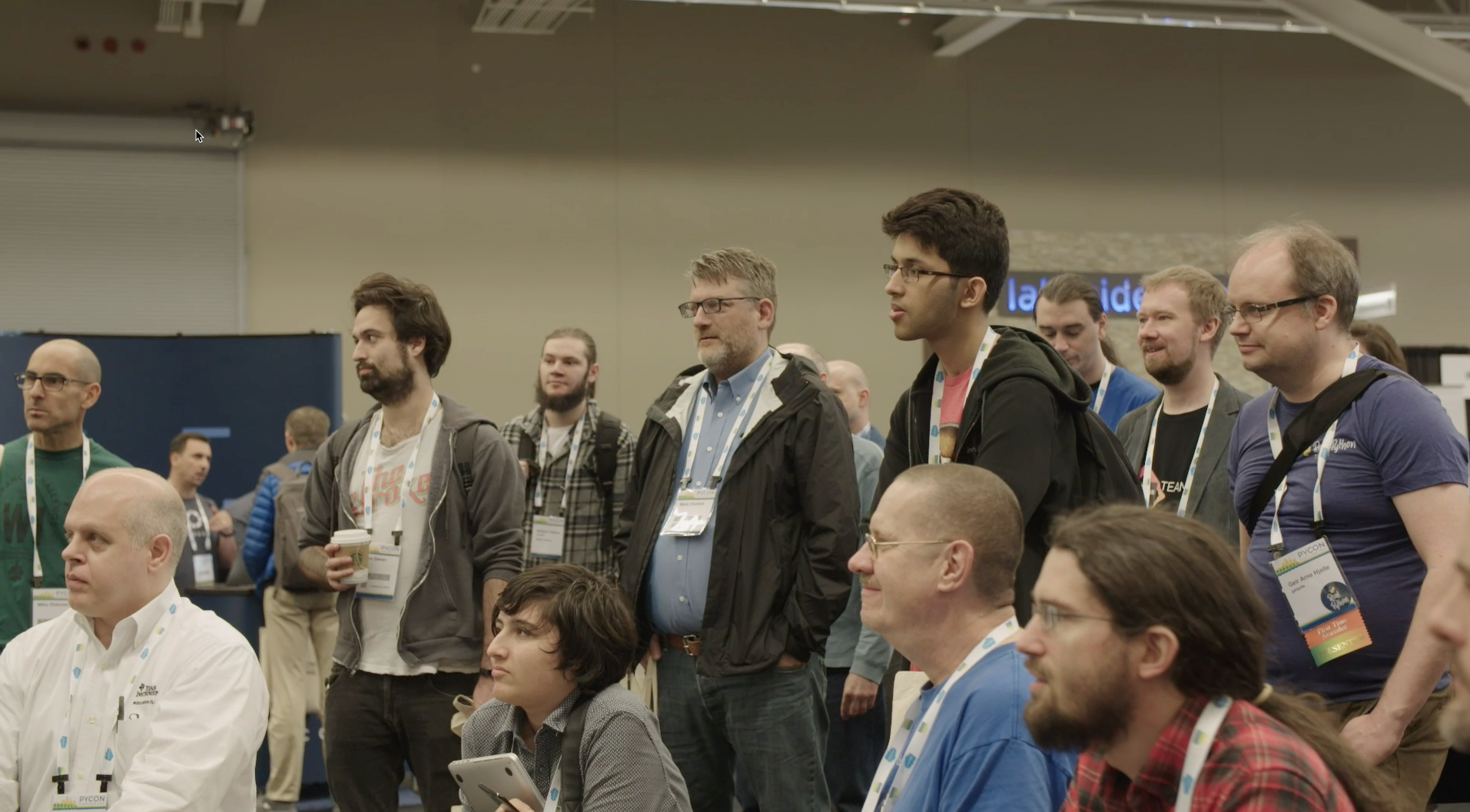 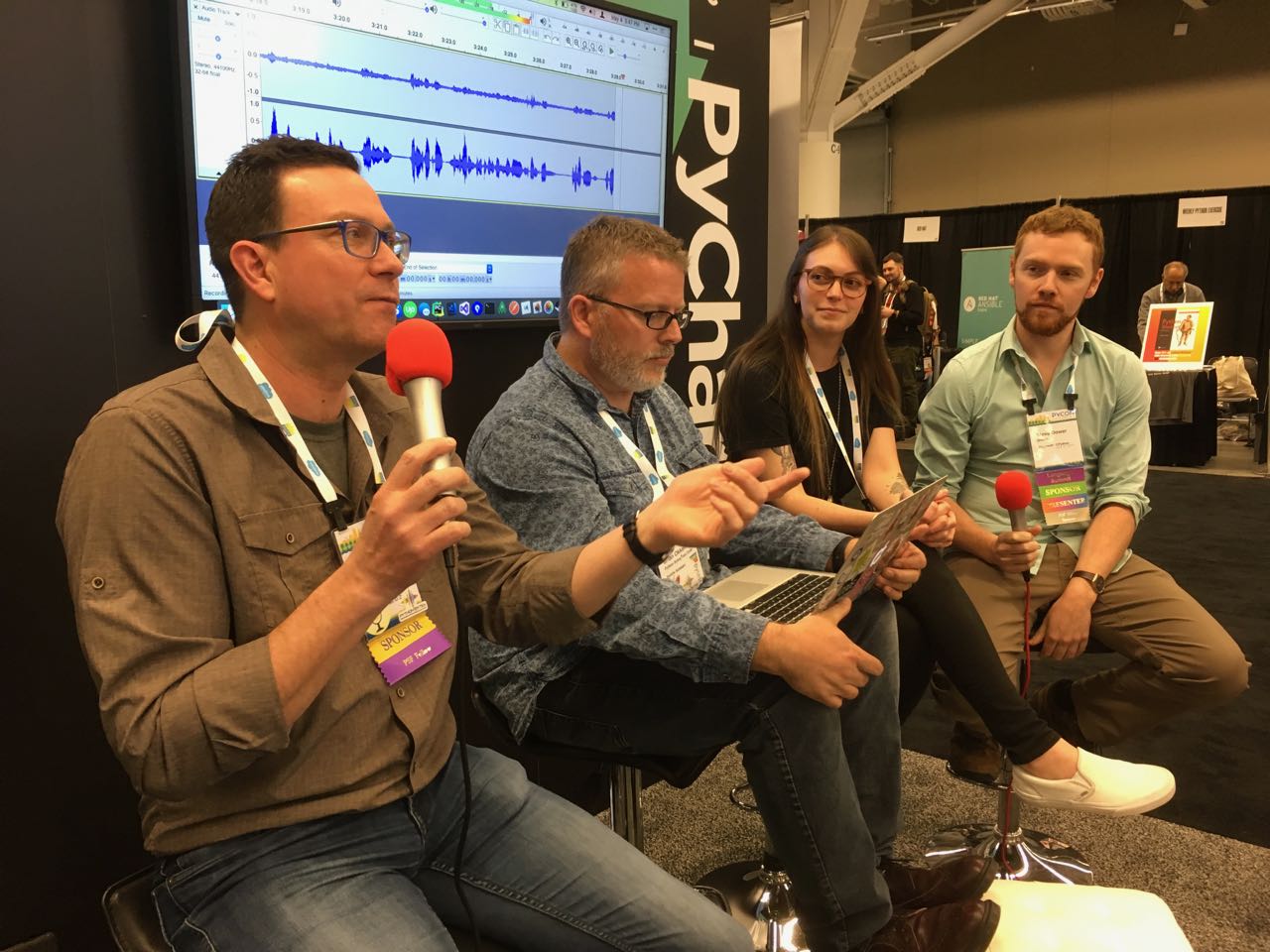 With such a great conference and so many activities going on, we wanted to capture some interviews with key people in Python as well as the PyCharm team. 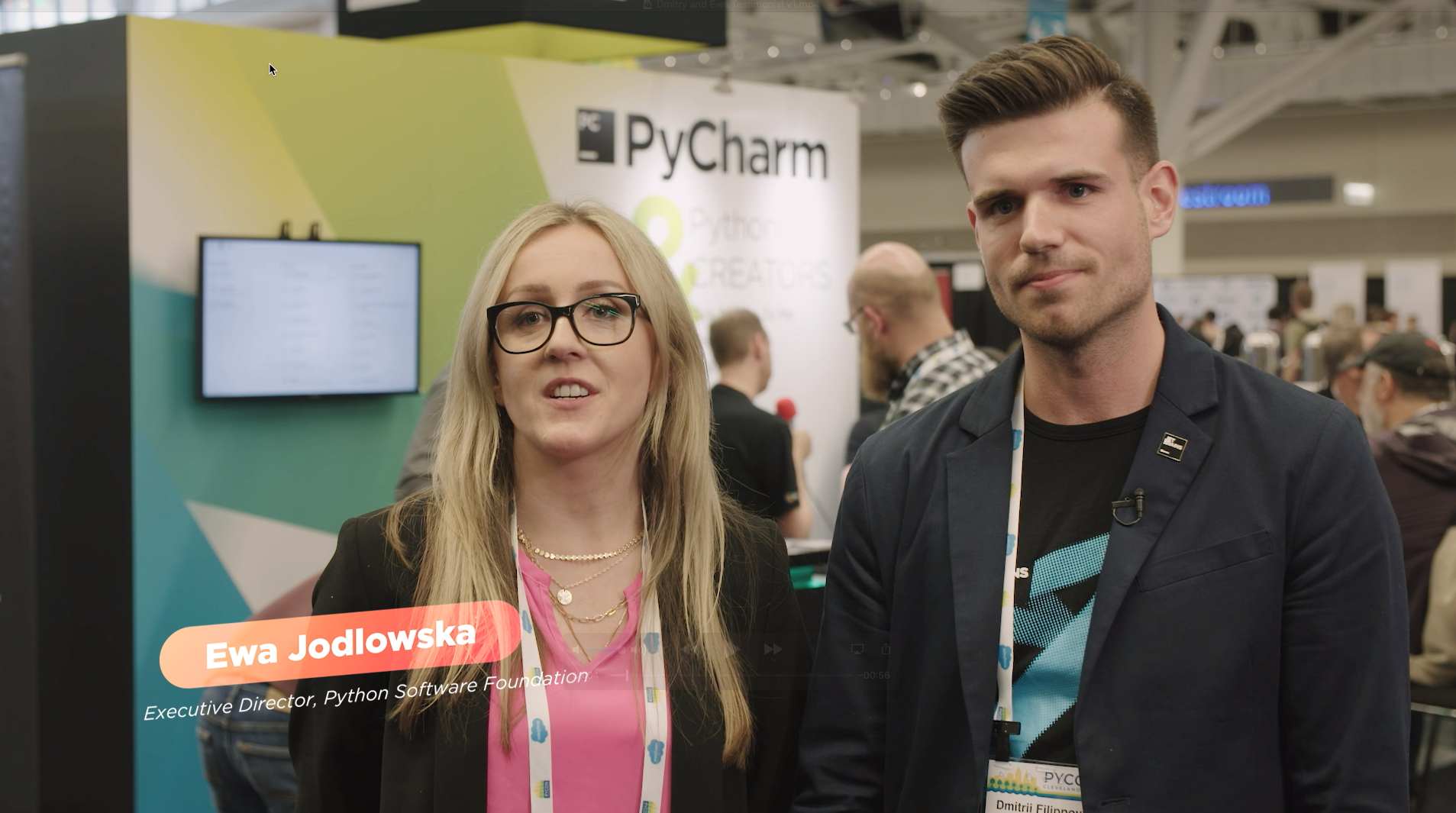 Ernst lined up a local videography crew who did a wonderful job going through our schedule of interviewees.

The full playlist of interviews is available on our YouTube channel.

And Of Course…the Booth

The design of the booth gave us much more space to engage with folks and have good conversations, which was important: we had a lot of traffic. 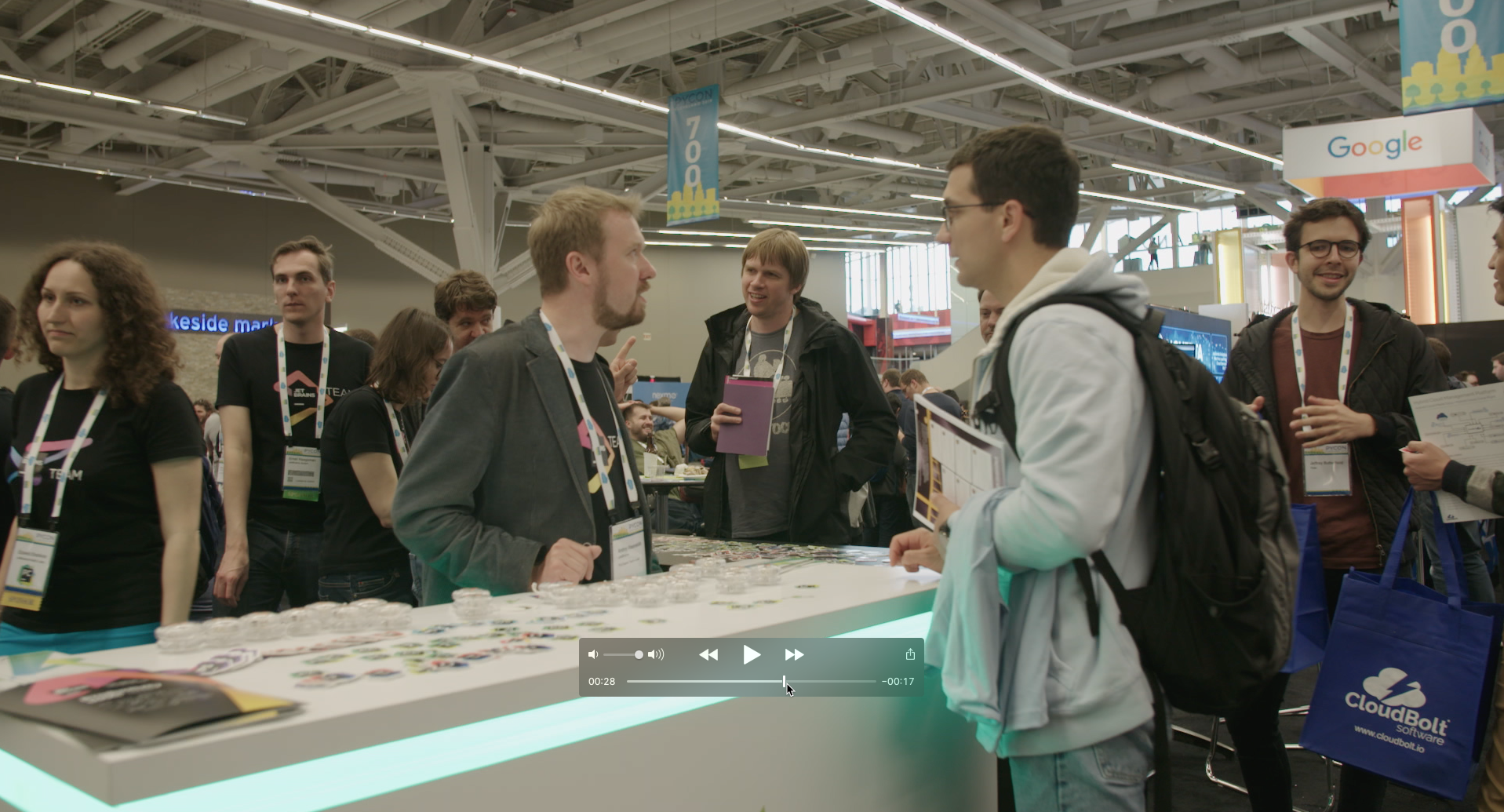 This year we added a one-on-one section, on the aisle, which as nicely designed to let us work with someone on their laptop, seeing the issue they were raising or cool thing they wanted to show. 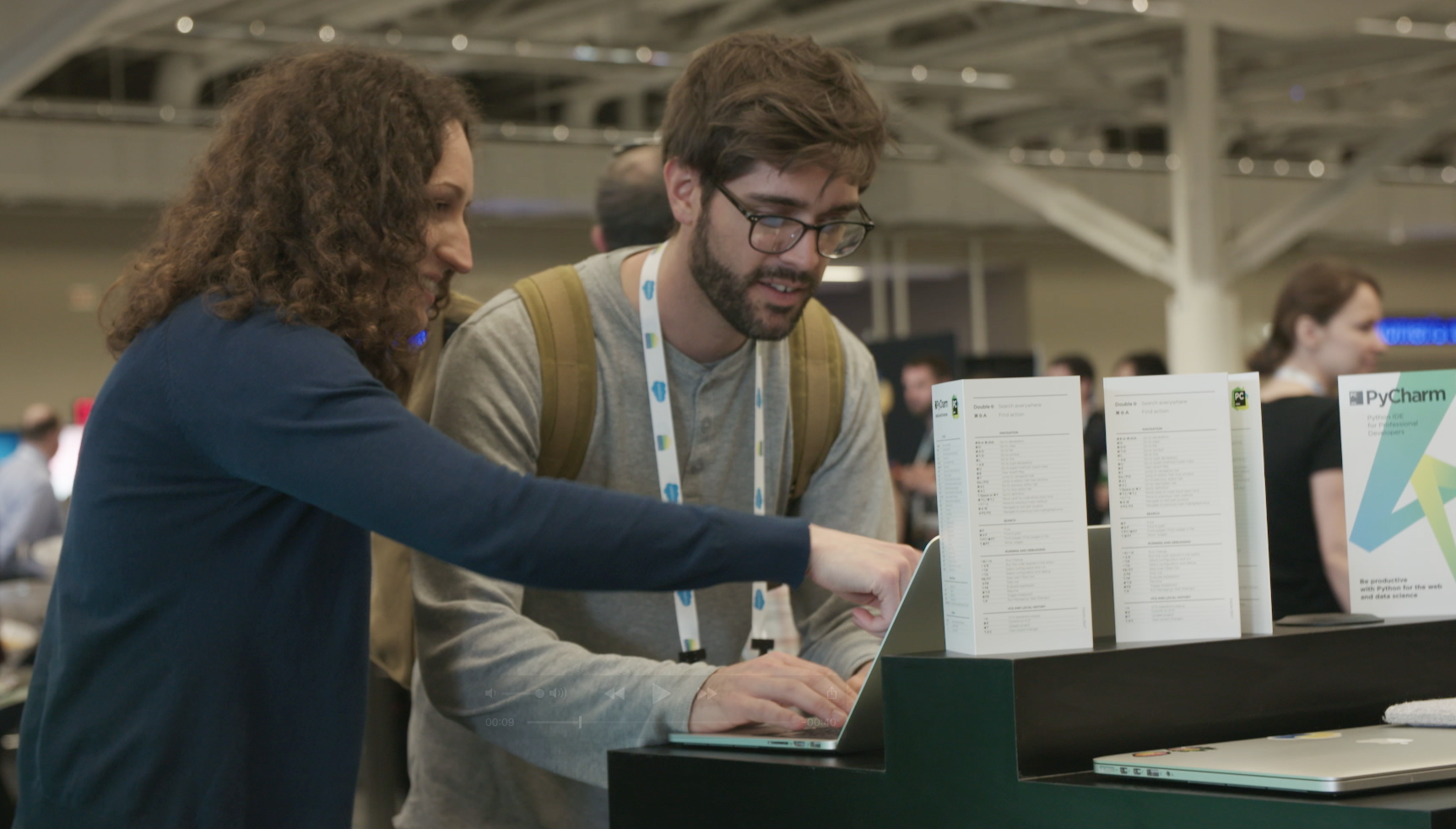 Our “Big Tent” idea was an oddball, a lot of work, a good bit of money, and…absolutely worth it. The PyCharm booth was a beehive of activity, super cool vibe with the content creators, and we accomplished a lot in just over two days. Verdict? “Glad we did it.”