Well, the second RailsConf day is over. A quick recap…

It was a great day, very busy at our booth (could not even think about taking a picture while the exhibit times). We’ve met and talked to really many people. Nice to meet some familiar faces from RailsConf 2009.

Dmitry: Gave a RubyMine talk. Went quite well. No hiccups with RubyMine during the demo even though used the latest 2.5 nightly build. Visited a couple of interesting sessions on “Garbage Collection and the Ruby Heap” and “Domain-Driven Rails Redux”.

Roman: Did a quick TeamCity demo in the end of Dmitry’s RubyMine session. My first public speaking experience. Hopefully it was bearable. Also met Aslak Hellesøy and agreed to pair-program tomorrow at BohConf around RubyMine Cucumber integration. Had a quick chat with Wayne Seguin about RVM, he showed couple of new forthcoming features.

Eugene: Convinced a bunch of people to try RubyMine by showing its advantages over advanced text editors and other IDEs. Really enjoy doing it. Some were really impressed with our YouTrack issue tracker. Had interesting conversations with guys from Engine Yard and InfoEther. Really looking forward to a possible cooperation.

And here goes a couple of after-conference pictures from Baltimore:

1. A nice view on the Baltimore inner bay

2. These guys just never stop. It’s almost midnight and they sit in the lobby, eating pizza, chatting, and their MacBooks open. 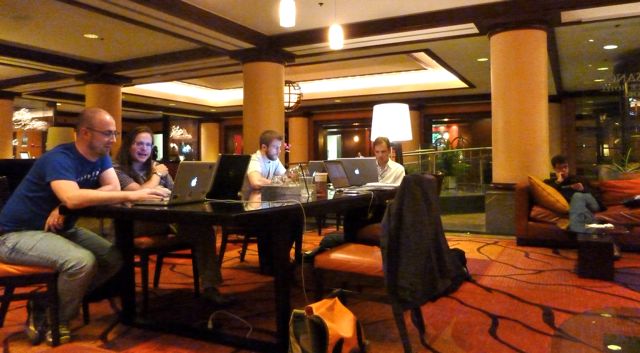 That’s it for today. Looking forward to day 3 tomorrow.