RubyMine 2018.1 Beta (build 181.4203.207) is out now and ready for your review! Earlier we told you about the new static analysis core engine that’s allowed RubyMine to understand and navigate your projects’ and Rails’ codebases better. These changes also had a great impact on the overall performance of RubyMine, which has become evident after fixing some bugs in the fresh 2018.1 Beta build.

Performance improvements already were a major highlight of the v2017.3 release. Yet, we believe now we have pushed it to a whole new level, which is confirmed by our sample testing.

To check our progress, we inspected all `.rb` files located in Diaspora’s app directory for unresolved Ruby references (Code | Run Inspection by Name | Unresolved Ruby reference), which is quite a consuming task in terms of CPU and memory usage. We ran this inspection in a stable build of every major version starting from v2017.1 as we’ve been iterating over different performance improvements for a year now. Then we also ran it on the new 2018.1 Beta build. The results didn’t disappoint us: 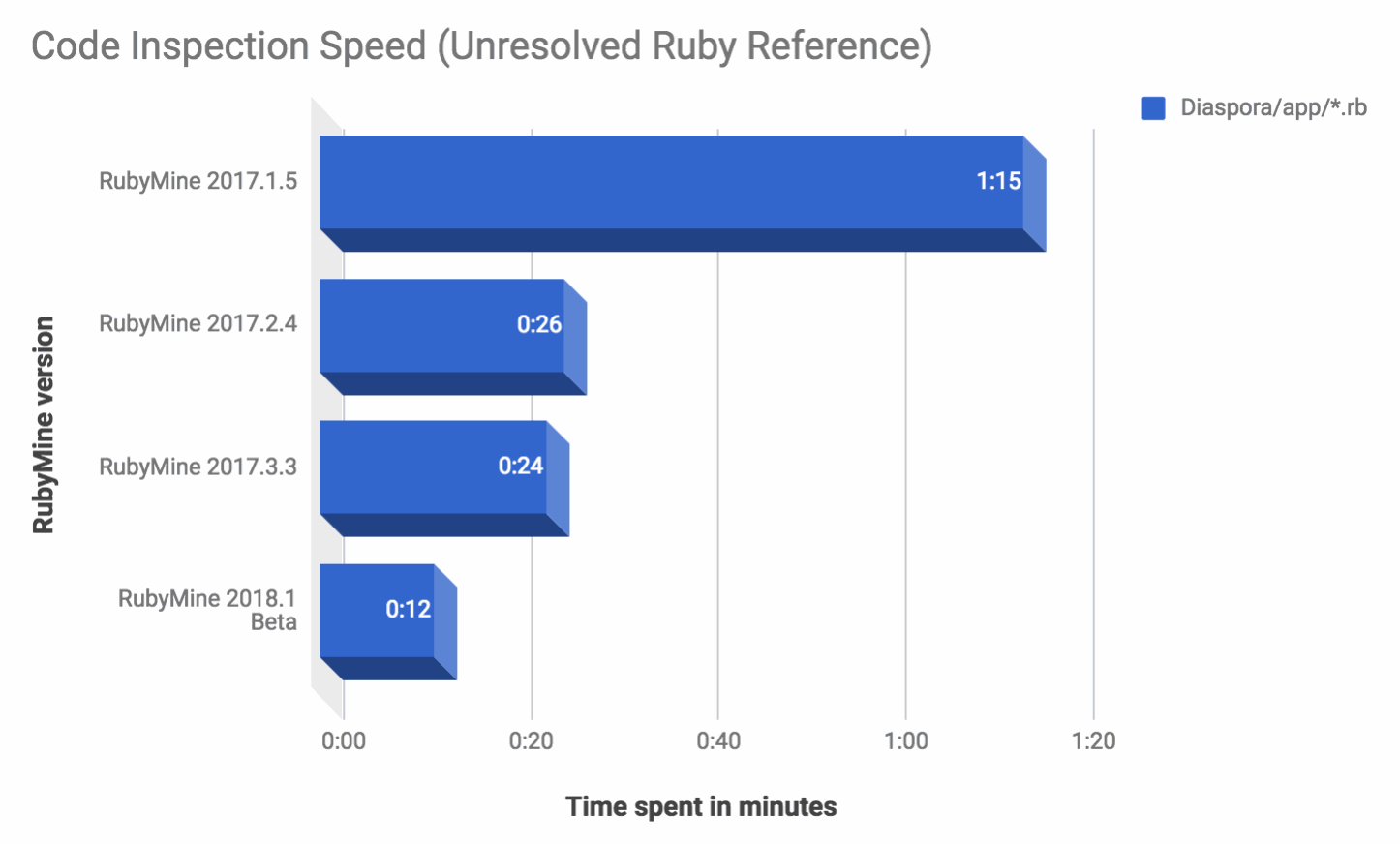 The new 2018.1 Beta analyzes Ruby code two times faster than the current stable 2017.3.3 build, and 6 times faster than the older RubyMine v2017.1.5. While results may differ slightly depending on your machine and your projects, the dynamic pattern should persist, so we really encourage you to check out the new Beta!

Comment out HTML and Ruby in .html.erb in one go

The new build also lets you easily comment out both HTML and ERB tags the way an IDE is supposed to – with a common keyboard shortcut – ⌘ / | Ctrl+Slash:

This works when HTML and ERB tags follow each other, as well as when Embedded Ruby is wrapped in HTML, which you possibly do a lot in your view files. Related issue: RUBY-15663

Markdown preview now displays UML diagrams if you have them in your `.md` files. Insert `puml` (this code snippet is available by default in the autocompletion list) before the UML code, so that RubyMine identifies the syntax properly and displays the diagram in the preview pane:

Feel free to leave your comments and suggestions in the related issue: [RUBY-19041]

As usual, see the release notes for the full list of improvements, and please report any issues you encounter.

RubyMine 2022.3 EAP2 is now available. Here are the most notable new features of this build: RSpec Support for example group aliases: xdescribe, xcontext, fdescribe, fcontext RubyMine recognizes the xdescribe, xcontext, fdescribe, and fcontext example group aliases and shows such blocks in the Structure tool window (⌘ 7 on macOS or Alt+7 on Windows). Now, you can also run these tests using the gutter icons right in the editor. Completion of shared context names In this build, we’ve added support for completion of shared contexts and examples. RubyMine offers completion options from any defin