Update: Read the update from 2019 about our code-generated art being used to create original artworks.

Crafting tools and making them better is human nature. JetBrains has built its business on this tradition, by creating tools which developers love using daily and which automate the routine parts of their jobs.

Almost 2 years ago, we shared a story of how we create artwork at JetBrains, along with a cool and geeky tool you could play with to create your own JetBrains-styled art.

Today we want to reveal the progress we’ve made in advancing our generative approach to creating artwork, and give everyone a new version of the tool! We’ve kept at it since 2017 and our techniques have gotten better, our graphics more vivid, and the process even easier.

We’re now up to 22 products. Multiply that by two to three major releases a year for each, and you’ll get an idea of how many different images we are churning out. With this kind of workload, the more automation you have, the better. And just as with tools that help you format your code to a certain style (they are called IDEs, I believe), automated artwork tools can also help you standardize your images with clear unified visual boundaries.

But let’s cut to the chase. Go to code2art.jetbrains.com to start generating awesome artwork!

In this version, the tool doesn’t give static images, but an animation. You can grab any of its frames as an image or save the whole animation as HTML5!

Don’t miss the ‘I feel lucky’ button which is great for exploring the whole variety of different graphics you can create. 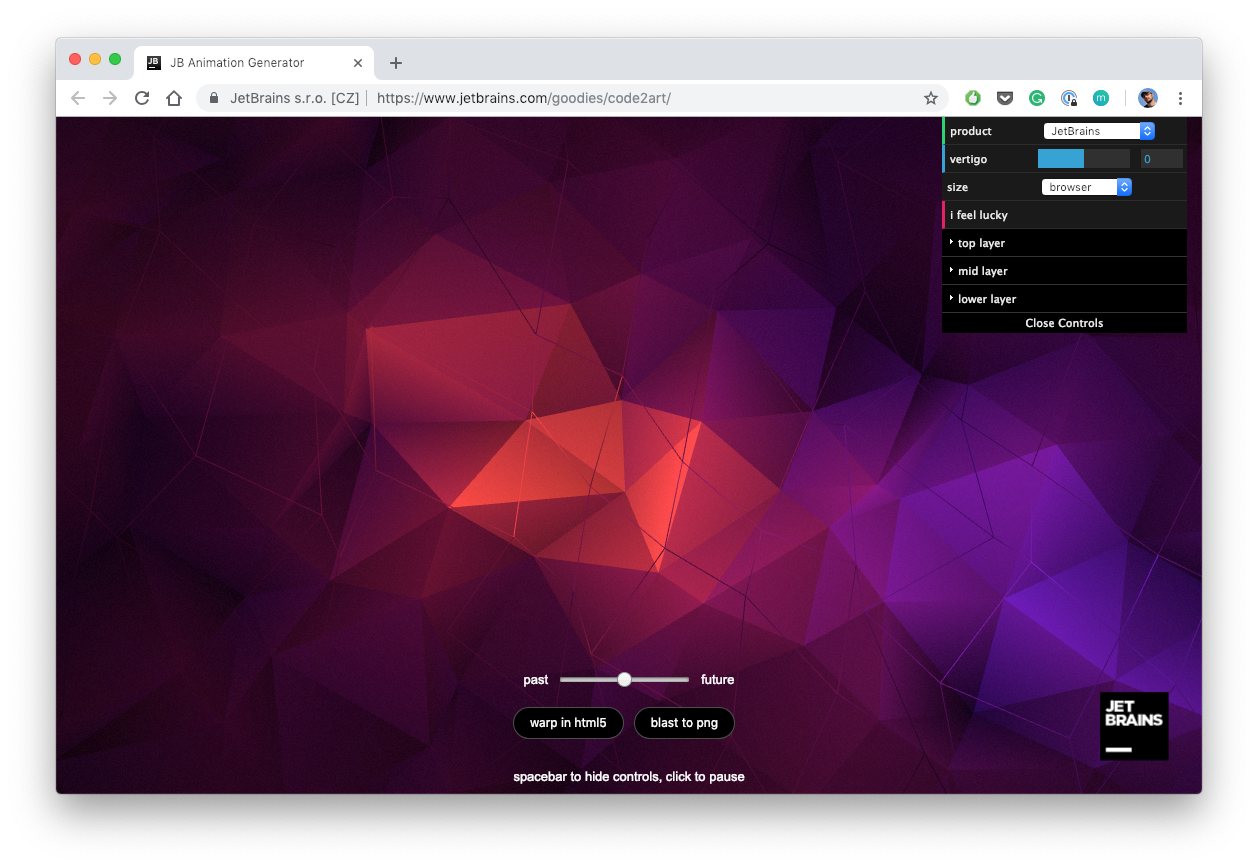 You may wonder why is HTML5 needed. We’re working on a way to allow creating custom screensavers and will announce it later. Stay tuned! But you can already use it for a nice endless animation in the browser.

For the curious (we had a feeling you’d like to know more), here’s how it’s done this time.

The generator is written in Elm language and the animation is powered by the Elm-WebGL library, with some help from the Flat Surface Shader.

The UI is built on top of dat.gui. But, we’ve noticed that the generated animation looks like something from a Sci-Fi movie intro, so we developed an alternative UI (in Elm, as well) for anyone who wants to feel like they’re in a spaceship. Try it out — https://code2art.jetbrains.com/#tron!

The whole application source code is available on GitHub under the Creative Commons license.

Have fun playing with it and don’t forget to share your results with others and tag JetBrains!

We are driven by innovation. By fostering the freedom to test new ideas, our annual Hackathon brings about change that can echo throughout the whole of JetBrains. Check out the results of our 9th JetBrains Hackathon to see what the teams have created this year! 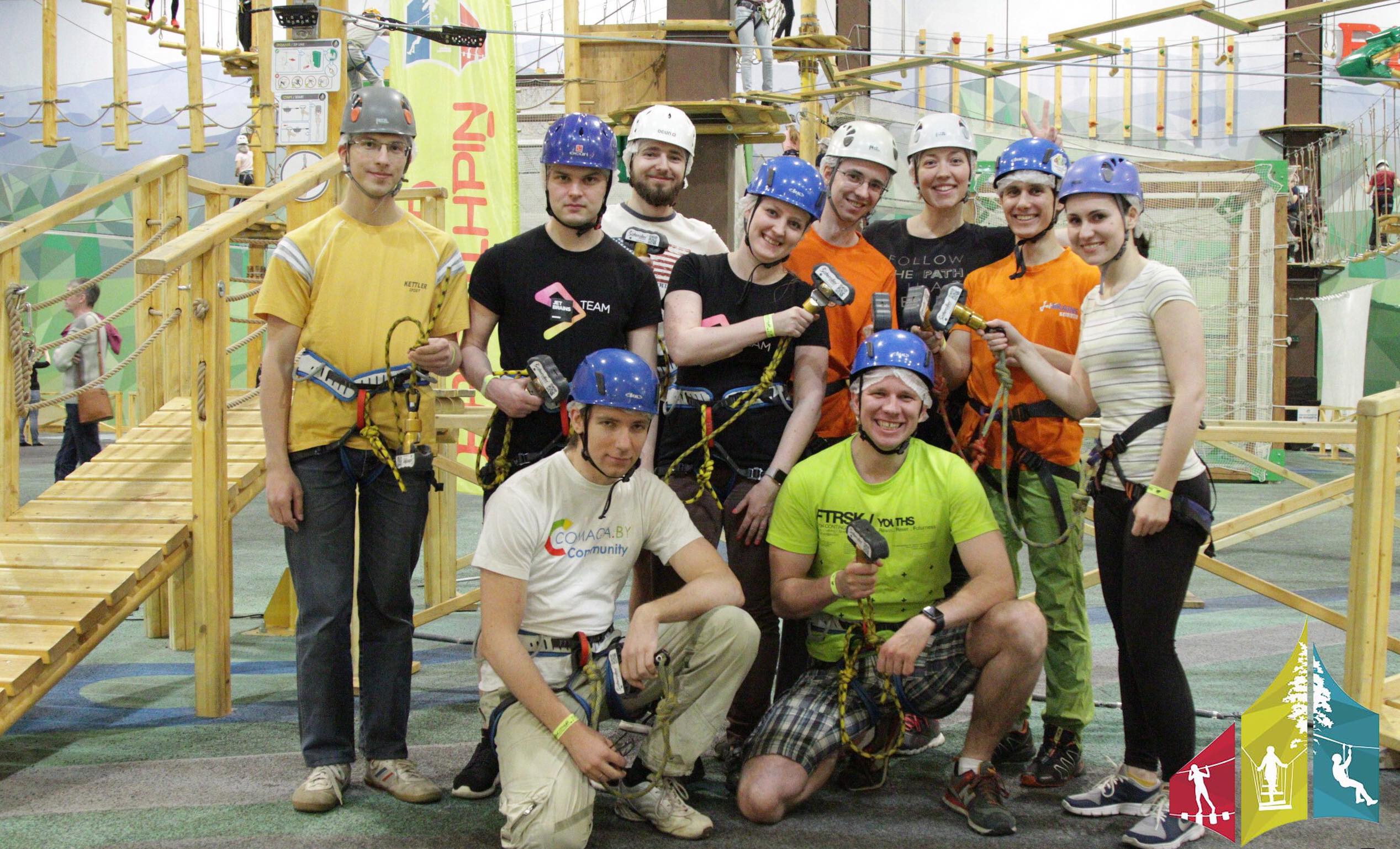 Baking Boards or the Secret Ingredient of Agile Cuisine

Behind every JetBrains product, there are numerous teams: developers, product marketing (PMM), technical writers, designers and many others. Each team has established their own workflows to match their goals, working habits, and the team profile. In an earlier post, we described how the YouTrack team had been cooking Scrum and had managed to transform this methodology to find the most balanced approach that works for them. Today, we will tell you how other JetBrains teams organize their processes, customize their Agile boards to meet the team’s needs, and what strategies can be useful to be

Being Agile in Your Own Way: A Scrum Guide by the YouTrack Team

Six years ago, the YouTrack team started developing an Agile board in YouTrack (our issue tracker and agile project management tool). At JetBrains, dogfooding is one of the key principles of product development. So while building a tool for our customers that conformed to the main principles of an agile framework, we knew we had to experience Agile firsthand. That’s when we decided to adopt Scrum. That was our first attempt towards the world of Agile practices. Unfortunately, after a couple of years (when our Agile board was released), we dropped our Scrum practices for a while. In 2016, we

The Art of Code, Visualized

Update: Read the update from 2018 about our approach to creating product artwork. Most of us who write code treat it as something special, more than just a bunch of characters stored in files. A lot of experience, thought and trial and error is put into it. For many, coding is creating and the code is their art. Some believe software development is rather art than science. And while we can't settle the discussion, we can certainly try and bring some art to science! Back in 2015 while working on our rebranding, the agency we were working with pitched the idea of trying code-generated art.