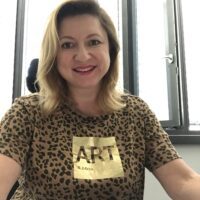 How many agents can be handled by TeamCity server?

This is our official reply to the question in the title:
The latest TeamCity version is known to work well with up to 300 build agents (300 concurrently running builds actively logging build run-time data). In synthetic tests the server was functioning OK with as many as 500 agents (the server with 8 cores, 32Gb of total memory running under Linux, and MySQL server running on a separate comparable machine).

This reply is based partly on our own experience and partly on our internal benchmarks. In this post I’ll explain what kind of benchmarks we use and will also show some of the results measured against the latest TeamCity version – 9.1.1.

We’ll start with the TeamCity architecture first: this will let us understand results better.

As you already know, TeamCity consists of a server and a number of agents. Agents run builds and send results (build log, artifacts, tests, etc.) back to the server. Most of the time the results are being sent in real time, while build is still running, which allows us to show a nice real-time progress of the build in the web interface, send notifications early, and so on.

An agent sends results to the server by the RPC protocol established over HTTP. During processing of these results, the server stores data in the build log on the file system and can also write some data into the database. For instance, all statistic values, as well as the information about tests (name, duration, status) are stored in the database.

So what happens if the server cannot sustain the load? All running builds have bounded message queues, so if these queues become full because workers cannot keep up with the data from agents, agents will get blocked on an attempt to add new data from builds. As a result, the build time will start increasing. When this happens, we can observe that the build script itself has already finished on the agent, but the server still did not mark the build as finished because it is still processing the build results.

This brings us to a simple idea of the benchmark: we need to generate build logs from a lot of agents for some time with a constant rate; then we need to stop the load generator and measure the amount of build logs processed on the server up to this time. Once we know the duration of the benchmark and the rate of build log generation, we can estimate the amount of build logs which should’ve been processed. Having this delta (estimated amount – actual amount) we can judge whether the server is ok with the load or not.

This benchmark idea has been implemented as a TeamCity plugin. The plugin adds additional tab under the Administration -> Diagnostics page. On this tab you can configure benchmark parameters, such as: the number of concurrently running builds, the duration of benchmark, the build log output rate and others. 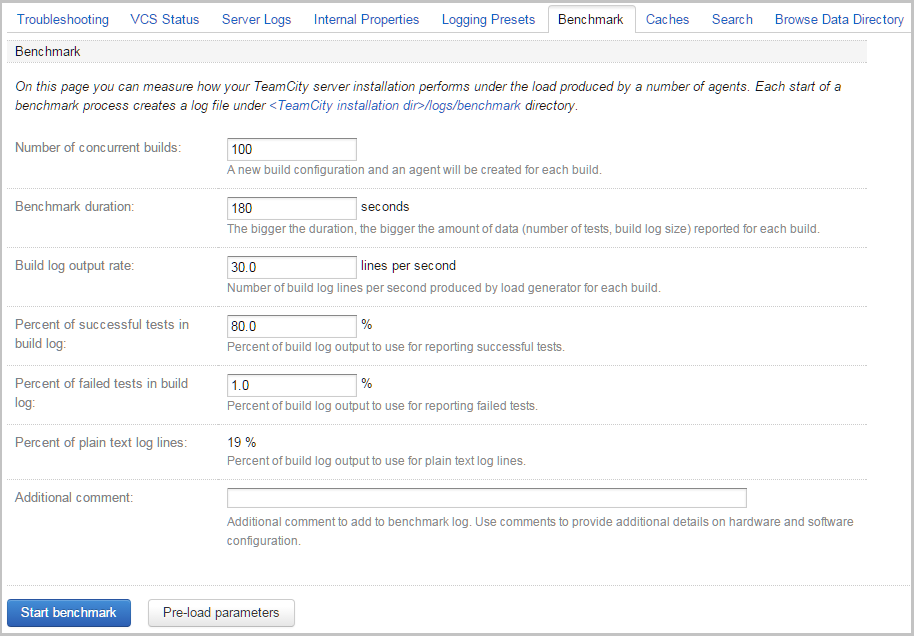 Some of the fields require additional explanation:

Note that the build log output rate and percent of successful and failed tests can be pre-calculated based on builds history of projects already configured on the TeamCity server (see “Pre-load parameters” button).

The log file for each benchmark is stored in a separate file under the <TeamCity logs directory>/benchmark folder. If additional comments are specified, they will be stored in the benchmark log as well.

So we’ve done some measurements on our own hardware:
TeamCity server:

Percona server 5.6.25 was installed on the database server machine. We’ve selected Percona because it is well known for it’s performance optimizations compared to regular MySQL. The following parameters were changed in my.cnf file:

To make the benchmark results more realistic, we set up a few open source projects and measured their build log output rate using the “Pre-load parameters” feature. See the results below:

Let’s see how these numbers are calculated:

As you can see, these formulas do not take the test duration into account. So even if there are lots of fast tests with the duration of 1ms, but besides running tests a build also performs other time consuming tasks, the resulting tests rate will be far from 1000 per second. This is especially true when many builds are running concurrently on the real server. In this case the builds will be in different states: some can run tests, others download artifacts, compile code, etc, etc. So we can safely say that it is unlikely that there will be a situation when all of them report tests with the rate of 1000 per second at the same time. As a result, the real load which can be sustained by the server is much bigger than one would expect by simply looking at the duration of individual tests.

For each of these projects we measured the maximum number of concurrently running builds our system can sustain without significant increase of the build duration (10% increase in build duration was considered acceptable). See the results below:

Note that the results of this benchmark cannot be applied blindly simply because this benchmark is a synthetic test and, like many other synthetic tests, it does not entirely represent the real life. For now it only measures one aspect of the server performance. It does not cover things like artifacts downloading and publishing, user requests, VCS operations, etc, etc.

On the other hand, if you plan to move your server to new hardware, this benchmark can help you to tune the hardware, disks and database parameters to achieve better performance.

How to run benchmark on your own server

The plugin is compatible with TeamCity 9.1.x.

If you want to try this plugin on your hardware, please read our suggestions below.

The plugin creates agents and each agent needs to be authorized, which means you should have enough agents licenses to run benchmarks. Besides, using this plugin on the production server may be a tempting idea, but the plugin can impose a significant load on the system, making it hard to use by other users. Moreover, in case of bugs in the plugin or server crashes, you can end up with lots of data which was not properly cleaned up – agents pool, agents, projects, etc. Finally, it may not be easy to fine tune the production system for better results as it requires downtime.

Because of that we recommend to setup a separate server, obtain an evaluation license from our site to be able to run the server with unlimited agents, and then run benchmarks on this system. Note that using the latest TeamCity version is also recommended as it may have significant performance improvements comparing to the version you’re using now.

Take a look at our documentation if you’re going to use MySQL or PostgreSQL database.

We would not recommend using HSQLDB for this benchmark: since we don’t recommend this database for production use, benchmarking against it is pointless. It’s a good database engine, but it is not as reliable and scalable as “big” databases. Big databases implement sophisticated approaches to keep your data safe (see for example: http://www.postgresql.org/docs/current/static/wal-reliability.html or https://www.percona.com/blog/2006/08/04/innodb-double-write/). HSQLDB being a database written in Java does not have a chance to implement similar reliability as it does not have proper access to hardware.

While running benchmarks, make sure to run them a few times, or at least run them with the duration not less than 180 seconds as this makes results more predictable. It is also recommended to perform a few warm up benchmarks after the server startup. Finally, if you choose to tune some parameters in the database or elsewhere, make sure to change one parameter at a time. Otherwise you may fail to notice which parameters give you better results.
Benchmarking is fun, but be prepared to spend tons of time on it!

We hope that you will use this plugin to assess your server performance, so if you do decide to run this benchmark, we will be really interested in seeing your results.