Building Open Source Security Into The TeamCity Workflow With Snyk

This guest blog post is brought to you by Snyk.

Snyk offers a developer-first solution for open source security. Snyk is developing a TeamCity plugin to help users with automated vulnerability scanning. Snyk’s blog post series documents their story of building the plugin to help others learn from their experience.

As part of the effort to “shift-left”, the DevOps movement has mainly focused on controls or gating mechanisms within the pipeline. Normally defined by platform/architecture leadership but used by developers, these gates can make sure that whatever doesn’t measure up to policy doesn’t get shipped. Security is not an exception to that, as security teams attempt to ensure that critical vulnerabilities don’t get through to the infrastructure.

This focus on gates in the DevOps pipeline is efficient in a narrow sense for operators, but not so much in the bigger context of software development and delivery. Its binary nature doesn’t lend itself to insights about what was wrong, how to fix it, how to automate that fix, or how to prioritize between tasks.

In contrast, Snyk’s approach is to catch vulnerabilities in open source dependencies even earlier: at the IDE stage (as we’ve shown recently with our IntelliJ IDEA integration) and, even more powerfully, by using tight integration with Git (where users can fix vulnerabilities with a simple pull request, and monitor for any new commit).

Using a tool like Snyk allows a development team to make the most of the capability at the development stage—in this case, the capability is to find and fix vulnerabilities with detailed and actionable insights (or choose to ignore vulnerabilities of a certain level; users appreciate the choice). Once that happens, it is absolutely fine for the DevOps gates further down the pipe to be binary, as they are in this case a secondary control mechanism; they come into play after developers have already gained visibility into the issues and already fixed those that they deemed most critical.

At Snyk, we have been embedding open source vulnerability scanning inside many third-party products and applications through available APIs. As we grow our language support and our user base, integrating with tools like TeamCity becomes an important enabler.

Here’s how it works: after putting my Snyk token into TeamCity, my build makes sure that it is in line with my Snyk org’s rules. In the example below, I have failed the build due to an app that is vulnerable beyond what my policy allows.

At this stage, I can know more before I go back into Snyk and start fixing vulnerabilities, as shown in the metadata below, which is embedded into the TeamCity UI. 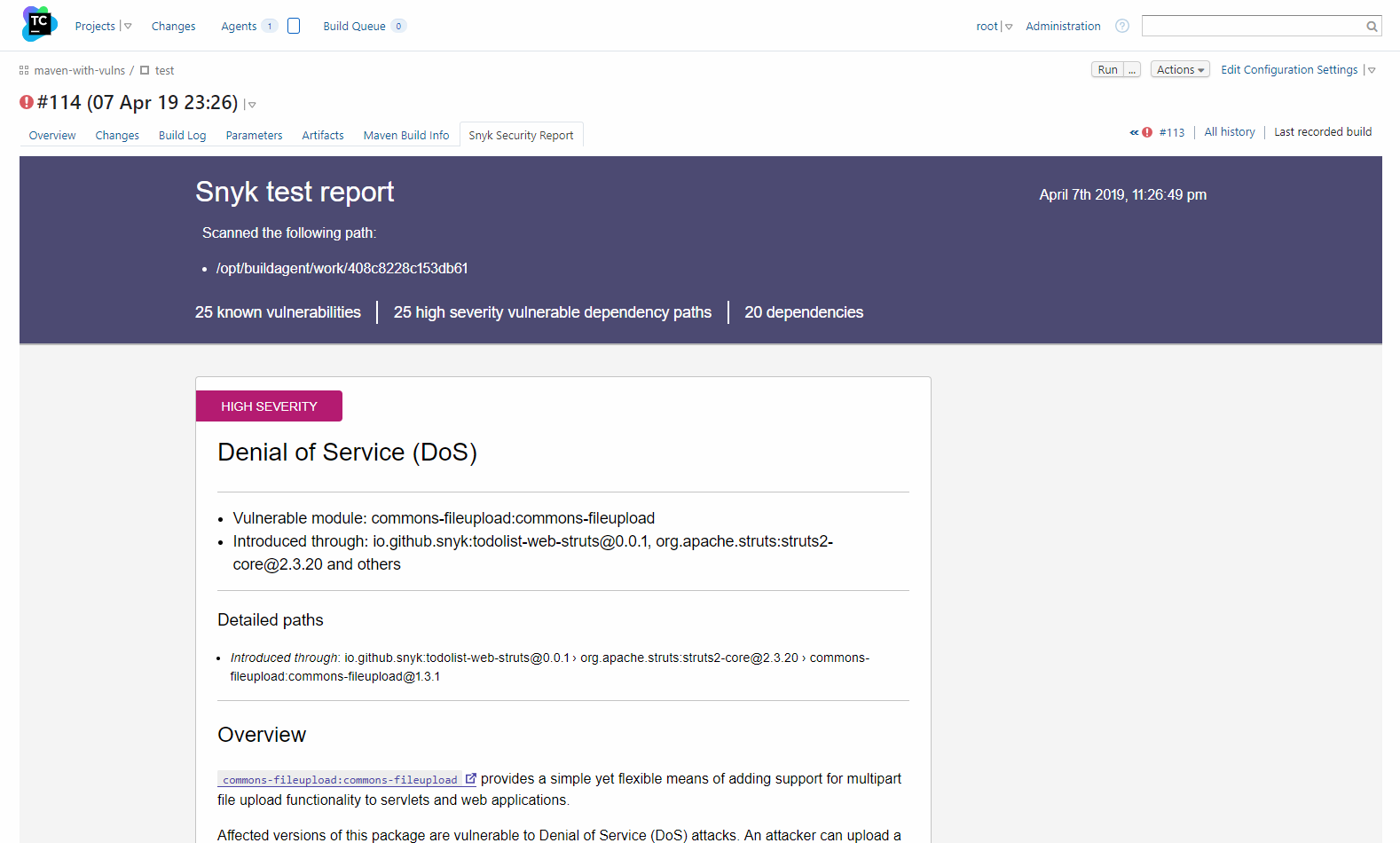 With simple integration into Snyk, I have not only gated the build to keep safe from vulnerabilities, but I have also opened a door for myself to go back and use these insights for catching and fixing issues much earlier.

In our next post, we will go through the process of building this TeamCity plugin and share what we’ve learned along the way.

Read the next post: Building the Snyk Plugin for TeamCity.

Have you ever tried to search for something in the TeamCity settings? TeamCity has a basic search functionality that helps you find projects and build configurations. However, to use more elaborate and complex criteria, you would have to resort to REST API. The new SearchQL plugin allows issuing composite queries directly from the Administration panel. The plugin provides a simple yet expressive query language for this purpose. The autocomplete feature makes it easy to use. To install the plugin, download it from the Marketplace and then upload it to your TeamCity server in Administration | Pl

Since its very beginning, TeamCity has provided extension points you can use to improve its functionality and your experience. Starting in 2020.2 EAP1, we are taking them a step further and offering you an improved way to write and integrate UI plugins, both in the Main and the Experimental UI (code-named Sakura). In this post, we share our experience, concerns, and motivation behind revising the plugin development pathway in TeamCity. If you prefer to get straight to technical information, welcome to the updated plugin documentation. We want the API to be as useful as possible by the 2020.2 r