Cleaning up tags on GitHub

Since we started development on IDEA, every nightly build of each IntelliJ-based IDE was tagged in the intellij-community repository on GitHub. After 18 years of development and having 10 products, we now have more than 68,000 tags in the repository! This many tags causes performance issues with git, in particular, every git fetch is very slow. To improve the experience of working with the intellij-community repository, both for us and for our contributors, we have removed these tags. We're currently deciding on whether they are needed on GitHub and what our tagging strategy will be going f
Posted on November 9, 2018 by Matt Ellis

Perhaps the most powerful feature that Rider has is its code analysis, finding issues and providing quick fixes and context actions to help you improve the quality of your code. Rider's Unity support is no exception, and in this post, we'll take a look at what Rider 2018.2 brings in terms of Unity-specific code analysis and refactorings. (more…)
Posted on October 18, 2018 by Matt Ellis

Updated guidance for module JARs in IntelliJ based IDEs

When building an IntelliJ based IDE, we've historically packed class files from implementation modules into a single big JAR. For example, for IntelliJ IDEA Ultimate this was idea.jar. However most of the classes in that JAR were IntelliJ Platform classes which are included in all IntelliJ-based IDEs. In IntelliJ IDEA 2018.1 we extracted such common classes to a separate platform-impl.jar file. Similarly, we extracted common platform API classes from openapi.jar to platform-api.jar. This can help to decrease build and startup time for the IDE, and also makes layout of different IDEs more consi
Posted on October 11, 2018 by Matt Ellis

Integrating Rider 2018.2 and the Unity Editor

Last time, we saw how Rider 2018.2 had added support for Unity's new Packages to the Unity Explorer. This time, we'll take a look at how Rider supports a key feature of Packages - Assembly Definition Files, with validation, code completion, navigation and even a little bit of refactoring! Let's see how Rider can help you author and edit your .asmdef files. (more…)
Posted on September 26, 2018 by Matt Ellis

Rider 2018.2 has been another bumper release for Unity features and updates! Today, we're going to start a series of blog posts looking at what's new. We're going to start with a look at how we've integrated Unity packages into the Unity Explorer, and future posts will look at new code analysis features, improvements in the Unity Editor integration and more. (more…)
Posted on September 19, 2018 by Matt Ellis

Mea culpa! In all the excitement of recent weeks, not the least of which was presenting Rider at Unity's Unite events in Seoul, Tokyo and Beijing (and we hope to see some of you at Unite Berlin next week!) we forgot to finish off our series of posts about new Unity features in Rider 2018.1. Let's have one last post to round things off before we get started with Rider 2018.2! You might remember that we've previously posted about the new features we have in Rider 2018.1 that integrate directly with the Unity editor: Control Unity editor play mode from within Rider View Unity console log
Posted on June 14, 2018 by Matt Ellis

In our last couple of posts about new Unity features in Rider 2018.1, we've seen that updating our Unity editor plugin to be smarter now allows us to control play mode, and bring the Unity console directly into Rider. In this series: Control Unity editor play mode from within Rider View Unity console logs directly in Rider Run Unity tests directly from Rider Unity Explorer and new code inspections The intent here is to reduce the amount of time you spend switching between Rider and the Unity editor. If you're working with code, let's stick to the code editor. And so we can sing
Posted on April 18, 2018 by Matt Ellis 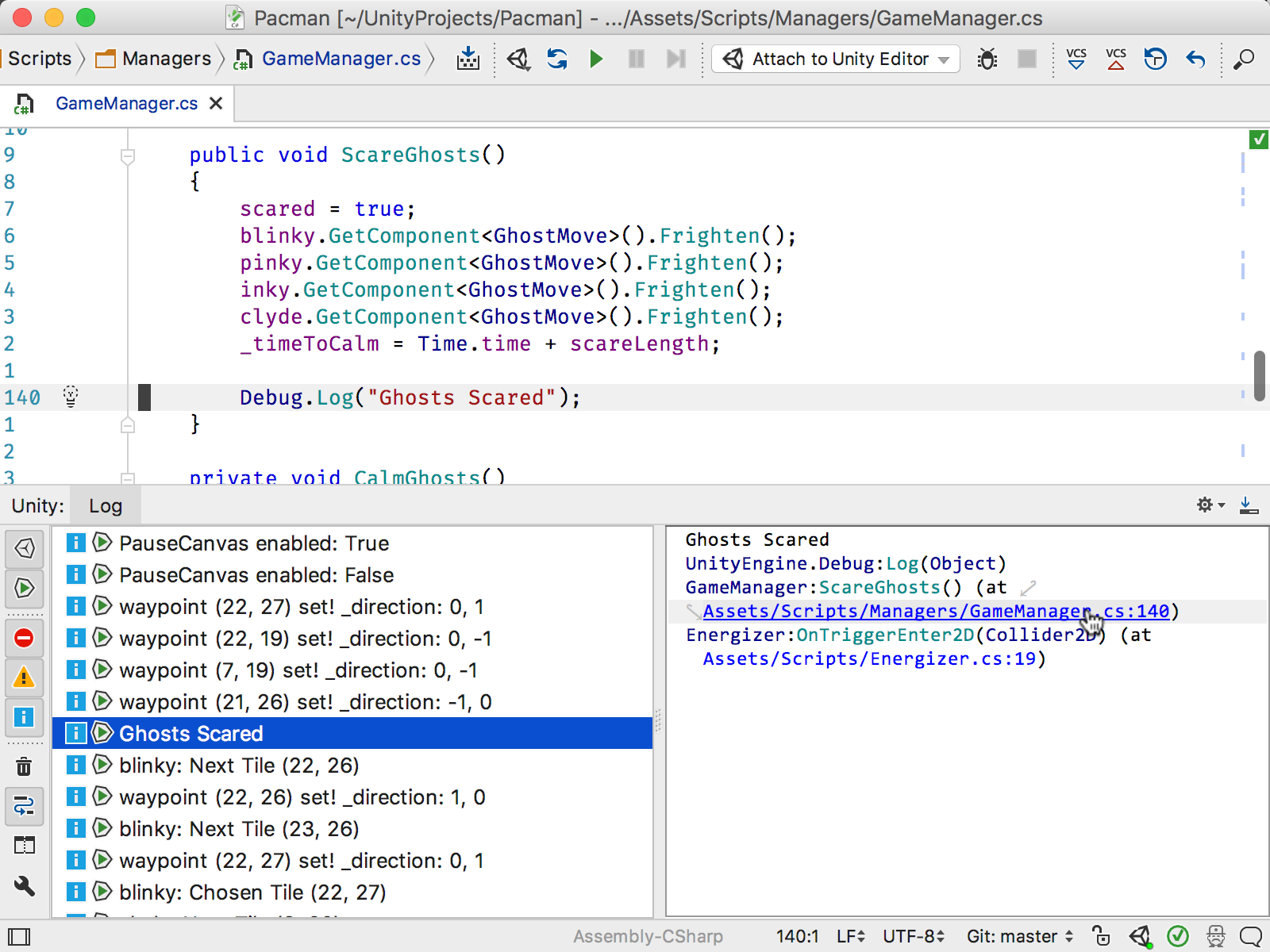 Last time, we looked at how Rider 2018.1 introduces a new Unity editor plugin which allows us to build deeper integration with Unity. We saw how we can now control play mode and step single frames without having to switch away from Rider. In this series: Control Unity editor play mode from within Rider View Unity console logs directly in Rider Run Unity tests directly from Rider Unity Explorer and new code inspections In this post, we'll take a look at another new feature that will also help reduce the amount of time you spend switching between the Unity editor and Rider - the
Posted on April 10, 2018 by Matt Ellis

One of our big themes with Rider's Unity support is to reduce how much time you spend context switching between Rider and the Unity editor, and Rider 2018.1 introduces some new features that are designed to do just that. Our new secret sauce is that we've improved our existing Unity editor integration. We've added a much smarter editor plugin that opens up two way communication between Rider and the editor. This means the editor can talk to Rider, to tell it to open a C# file that's just been double clicked, but even better, it means Rider can now talk to the editor, and tell it to do thing
Posted on April 5, 2018 by Matt Ellis

Working with external class libraries in Unity and Rider

Yesterday, we posted about a new feature in Rider 2017.3.1 - debugging third party code in Mono. This feature nicely rounds out Rider's support for a specific Unity workflow - building and debugging external class libraries. Let's take a look at how Rider can help here. Unity will of course compile any C# scripts that are in the main Unity project, and it will generate the correct debugging information as part of the normal build process. Rider already has great support for debugging normal Unity C# scripts, and will automatically configure itself to attach the debugger to the Unity editor
Posted on February 20, 2018 by Matt Ellis

Back in December, we announced a really cool feature - the ability to seamlessly debug third party code in Rider. No need for a .pdb file, just hit F11 and step in - Rider will decompile the code on-the-fly, and boom! you're debugging, just like that. A fantastic feature, but only available for .NET Framework and .NET Core. With the recent release of Rider 2017.3.1, we've updated this to also work with Mono, which brings this feature to all runtimes, on all platforms. That means Windows, Mac, Linux, .NET Framework, .NET Core, Mono and of course, Unity. (more…)
Posted on February 19, 2018 by Matt Ellis
Load more