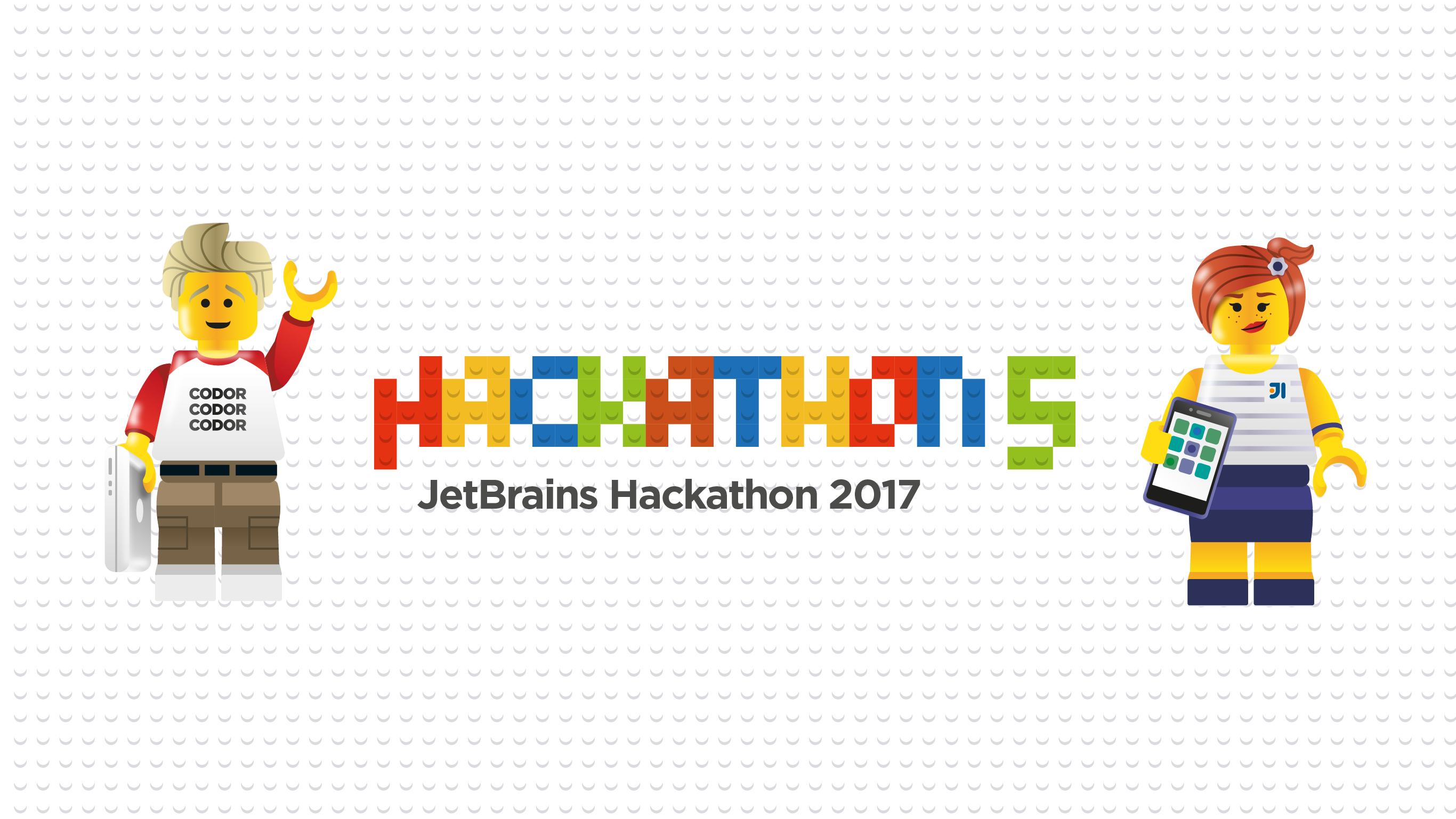 Looking back at Hackathon 5

“People who are crazy enough to think they can change the world are the ones who do.” – Steve Jobs.

In two days that is exactly the attitude a determined few embraced. With JetBrains’ 5th Internal Hackathon innovation, hard work, and determination the start of some incredible projects have been dreamed up, explored and discovered with already promising results.

Two days, 52 submissions, and 40 successful projects. The atmosphere in JetBrains was charged by the 99 participants who gathered on Wednesday, May 31st, ready to make their ideas come to life.

What it takes to code

No one can code on an empty stomach. Coders were able to sustain their progress with a provision of food, drink, and a healthy dose of optimism – achieving in just two days what others have only dreamed of. This year there must have been something special added to the pizza toppings as the projects surpassed every expectation.

The Prizes on offer

$18,000 worth of prizes split over nine categories were up for grabs this year, making the competition full of fierce contenders. 204 voters and a panel of judges oversaw entries and determined the winners based on votes and ingenuity. Prizes and their respective project winners were as follows.

The team made up by Dmitry Ivanov, Serge Baltic, Mikhail Filippov, Sergey Coox, Nikolay Kuznetsov, Andrey Akinshin, and Ivan Pashchenko created a historical debugging tool plugin for IntelliJ Platform which enables developers to open very long .log files and debug right inside the IDE with features such as: Text search in large files; Grouping, filtering, folding by category, threads; Navigation to source code from log event; Go to next error; Stacktrace highlighting; Extend selection; and Advanced error stripe (heat map). Ideolog collected a total score of 170, smashing the total of the nearest competitor. You can install the plugin and try it in your IDE right now.

Logs inside the IDE

In this day and age, no one should still be using such a primitive tool as a traditional mouse. Roman Belov, Sergey Krivokhatsky, Bogdan Bugaev, and Anton Kryshchenko set about creating a system to track hand movement over the keyboard to control the mouse pointer and perform other actions such as scrolling and clicking. No mouse needed. Problem solved.

When was the last time you thanked a colleague for a piece of work that they had done, or worse yet, been thanked for a piece that you had really gone above and beyond to complete? Victor Kropp, Olga Dyka, Marina Haynk, Ekaterina Shliakhovetskaja, and Julia Repina, in a bid to improve the culture of JetBrains, took the challenge to make a quick and easy-to-use webapp integrated with our internal Slack and office TVs to show colleagues your appreciation for all things, great and small. 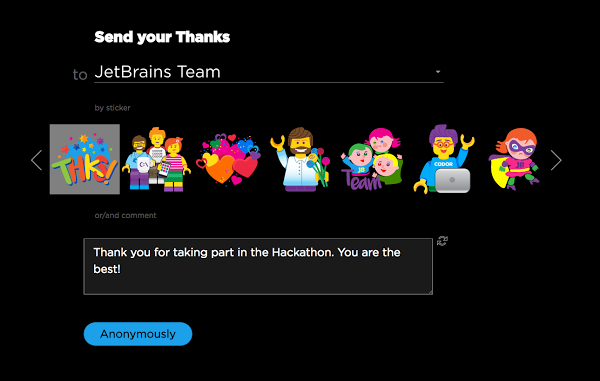 Two projects were awarded special mention with the CEO’s Choice Award with both teams receiving prizes of $1,000 each. With Kotlin being the hot language, teams that explored the possibilities of this brought favor upon themselves from our CEO and rightfully so as they showed the potential there is to be had with this language.

The project created an IntelliJ plugin to support editing and running “sketches” based on Kotlin Script and Processing Java APIs. The idea leveraged the power of IntelliJ IDEA smart code analysis and auto-completion to make programming even more fun and rewarding for novice programmers, and for kids a tool that detects their errors before they run their code. The team consisted of Roman Elizarov, Dmitry Jemerov, Mikhail Glukhikh, and Simon Ogorodnik.

Filipp Riabchun, Eugene Datsky, and Andre Skladchikov have opened up the possibilities for Kotlin code to work with React components. Could this be the future of web development?

Three projects took home the Audience Choice Award. Calculated from the likes of the audience these projects won through their popularity with the 204 voters taking part.

Developers, like normal people, are bound by certain desires: to be recognized, accepted, and to be the best at something. Alexey Kudravtsev developed his app Vanity Stats to give users unbiased insight into what they are best at by filtering commits for useful stats such as swear words used, at what times commits are made, and the number of commits performed. It is possible to get an accurate reading of what someone is the best at and the strengths they should develop on.

“Time. The wayward substance that never slows down.” Wasting your time in the most ineffective pursuit in the evolution of humans, queuing, has finally met its match. Sergey Ugdyzhekov, Alexey Kireev, Andrey Sizov, Nikolay Krasko, Vladimir Grigoriev, and Kirill Malich. The heroes of our time, time lords, adventure time, they go by many names. Their app though goes by just the one name: Outliner. ‘Spend your time clever’ with a web application and a Slack bot for booking appointments in the office that manages the queue and notifies you when the doctor is ready to see you.

Do you need a pot of gold delivered to a colleague in Munich, but trust your colleagues more than an unknown postal worker? JetPost was developed to help you find a reliable alternative to ensure your important goods make it to their destination. Using JetPost Slack bot, a notification is sent to any person traveling to the destination from your area, checking against trips in JetPeople (our internal team directory), and also detecting when possible delivery subjects come up in Slack. Then it will help with the collaboration between the people involved to ensure the transaction goes smoothly.

Hackathons happen for a reason. By taking the time to sit and think about the problems around us and then innovating real solutions to these matters, projects made during these 48 hours solve issues that then allow further progress. Winner of the 2016 JetBrains Hackathon, the JetPark project (office parking space sharing and remote control), continues to provide incredible value and was awarded the ‘Actively Used’ award. Well done!

There were so many great entries to this year’s Hackathon with teams innovating and coming up with amazing ideas. Noticeable trends are coming from the educational and learning areas with the projects Train Brain, IntelliJ Flashcards, Learn Kotlin for Android Development, and JetWatch, all concerned with learning methodology and techniques. With the smartest minds working on such pivotal problems, change can be made in the world and it is exciting to see how we can go forward from here.
Whether you created a code-shaming app like the Critique project…

…or a single application for the office environment like the Universe project (“Universe is the name of our main St.Petersburg office”), your contributions are incredible and open opportunities into the future. What was achieved in 48 hours… is… Awesome.

Events hackathon
The Developer Ecosystem: What is dominant in the world of codeOfficial Support for Open-Source Rust Plugin for IntelliJ IDEA, CLion, and Other JetBrains IDEs