Today we’re announcing the CLion 2022.2 release! To update to the new version, you can use the Toolbox App or a snap package (on Ubuntu), download the installer from our website, or apply the patch update to upgrade from version 2022.1.

The CLion 2022.2 release improves CMake integration. The Quick Documentation popup has become a useful source of knowledge about your C++ and CMake code. Enhanced static and dynamic code analysis, better debugger integration, and performance improvements for remote and Docker toolchains help you develop more productively. Read on for more details and give CLion 2022.2 a try. 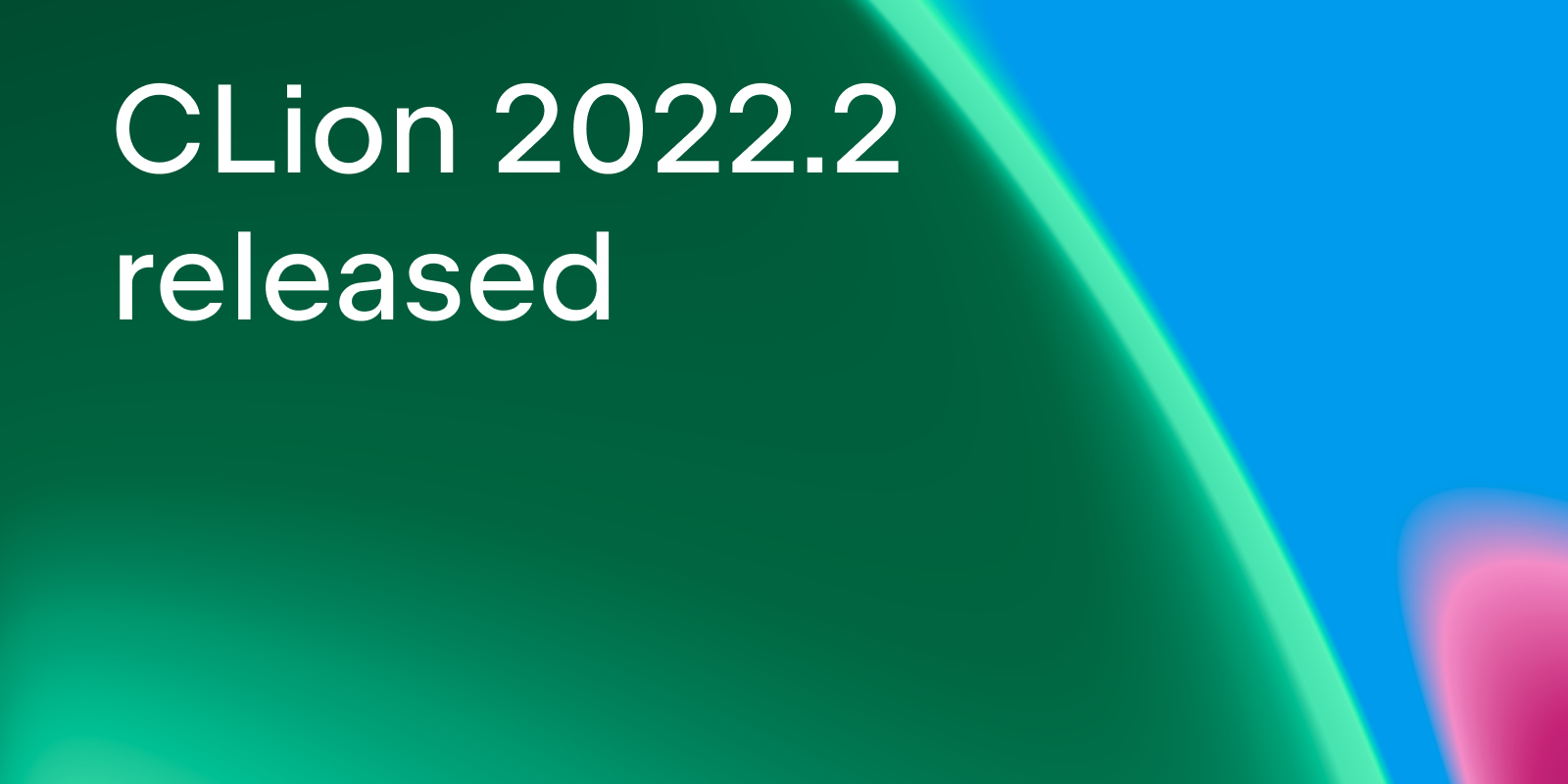 Reading through the codebase with the enhanced Quick Documentation

Developers typically spend a lot more time reading code than they do writing it. Tools that help you read code more easily and grasp the ideas behind the code more effectively are real productivity boosters. The Quick Documentation popup (available on mouseover by default, Ctrl+Q on Windows/Linux, F1 on macOS) is one such tool! It’s a universal instrument to help you get more information on a code element at the caret. In v2022.2, CLion has added more code insight to this documentation.

CLion now allows you to view the value of the expressions evaluated at compile time in the Quick Documentation popup. Consteval and constexpr calculations are typical use cases where this could be helpful: 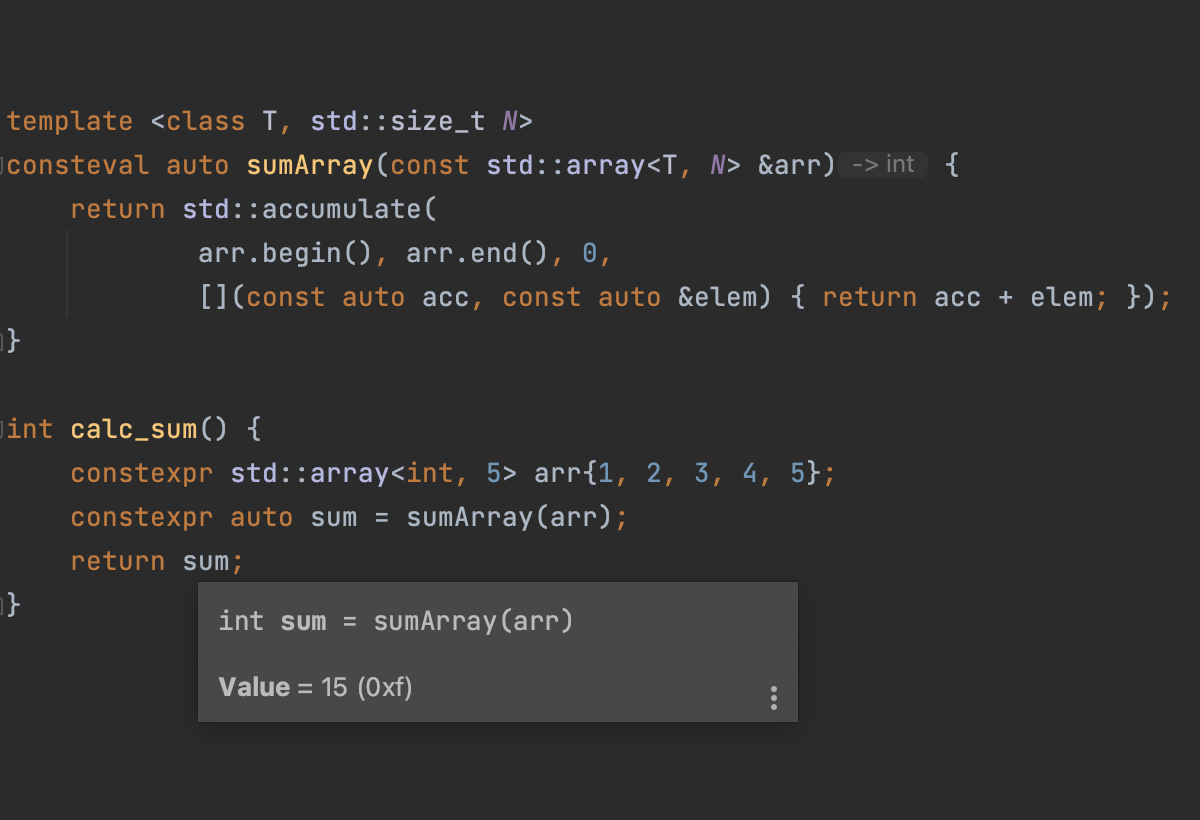 It also shows the enum value as an integer and whether a given struct or class declaration supports copy and move operations: 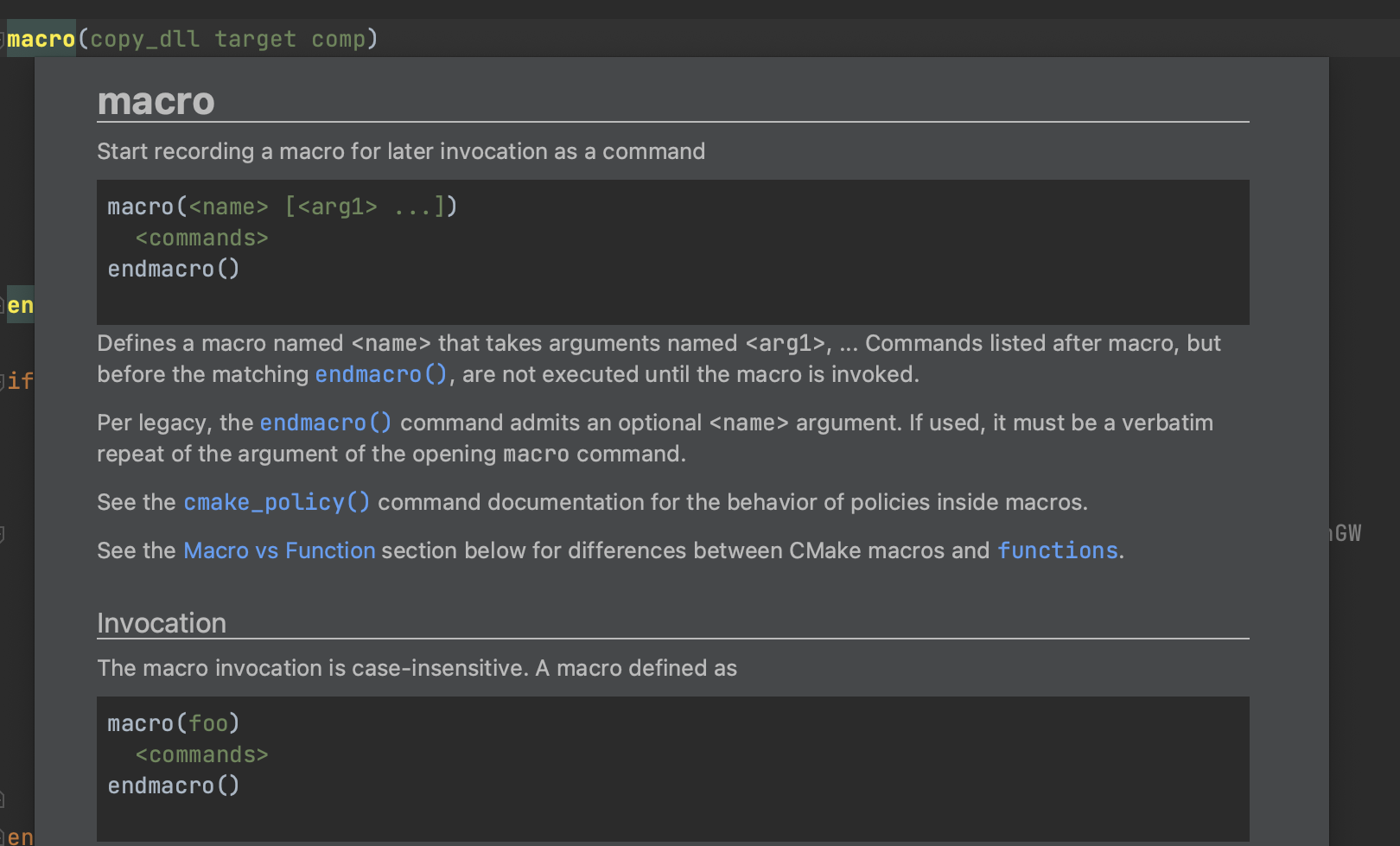 What other pieces of information would you like to see in the Quick Documentation popup? Let us know in the comments.

CMake is a leading project model in the C++ ecosystem. It also evolves quickly, bringing useful features like CMake presets to users. CMake presets are a way to configure and share CMake options. In CLion, settings required for building a CMake project are incorporated into CMake profiles, which have many settings in common with CMake presets and are also shareable via VCS. CLion automatically generates CMake profiles based on the CMake presets found in the project.

In this release, we changed the naming scheme used in automatic generation. When auto-creating CLion profiles for all the configure and build presets, CLion now uses the following naming scheme:

A copy action for profiles created from presets is enabled, so you can copy and edit the copy later. 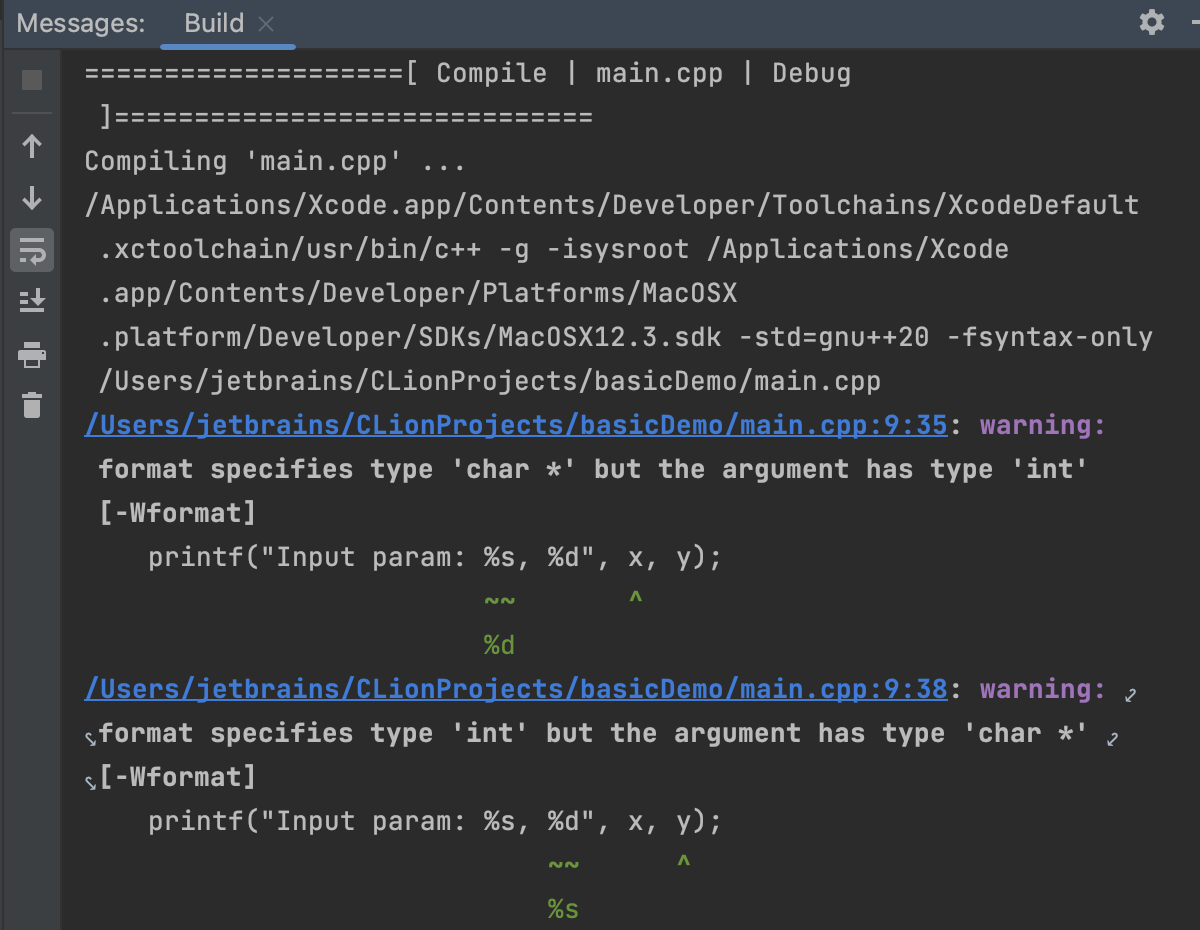 We’re continually adding more assistance for CMake editing. In addition to the Quick Documentation popup now available for CMake scripts, CLion 2022.2 enhances the code completion in CMake. For that, Qt-related commands were added to completion lists:

In CLion 2022.2, you can now review CMake cache variables and update CMake options that are passed to the CMake command in a single table-based UI in Settings/Preferences | Build, Execution, Deployment | CMake. 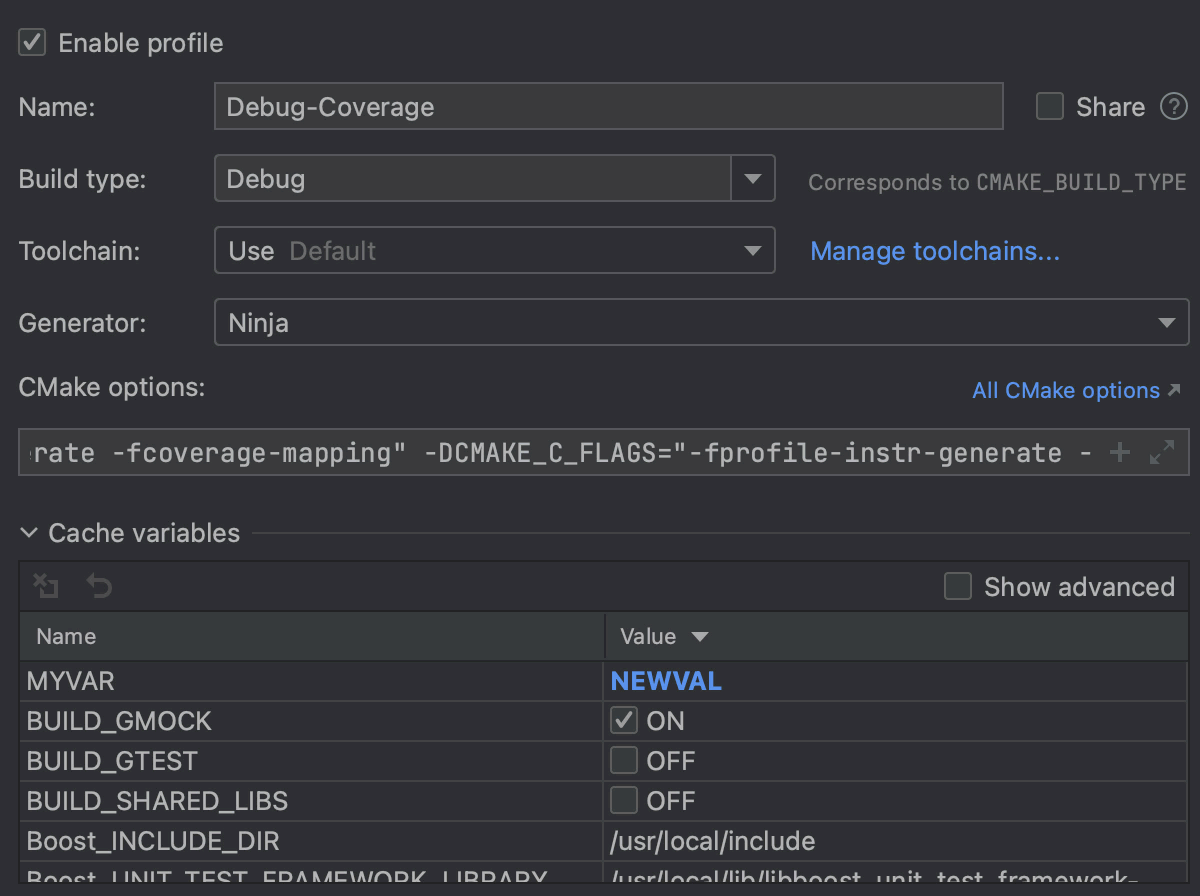 In the table, you can search for a variable or its value, visually distinguish recently edited values and values defined in your CLion’s CMake options, and check out the short description in tooltips for CMake cache variables.

Windows users can also now benefit from symbol server support in CLion. If the library symbols are not available on your local machine, you can configure a symbol server, a file server that stores your debug symbols centrally on a server, in CLion and use it during the debug. Learn more.

GDB servers are often used to debug on-chip. In CLion, you can do that via the Embedded GDB Server run configurations. It supports many known GDB servers, like Segger JLink, QEMU, PE Micro, St-util, and others. However, it can be challenging to fill in all of the GDB server arguments correctly. 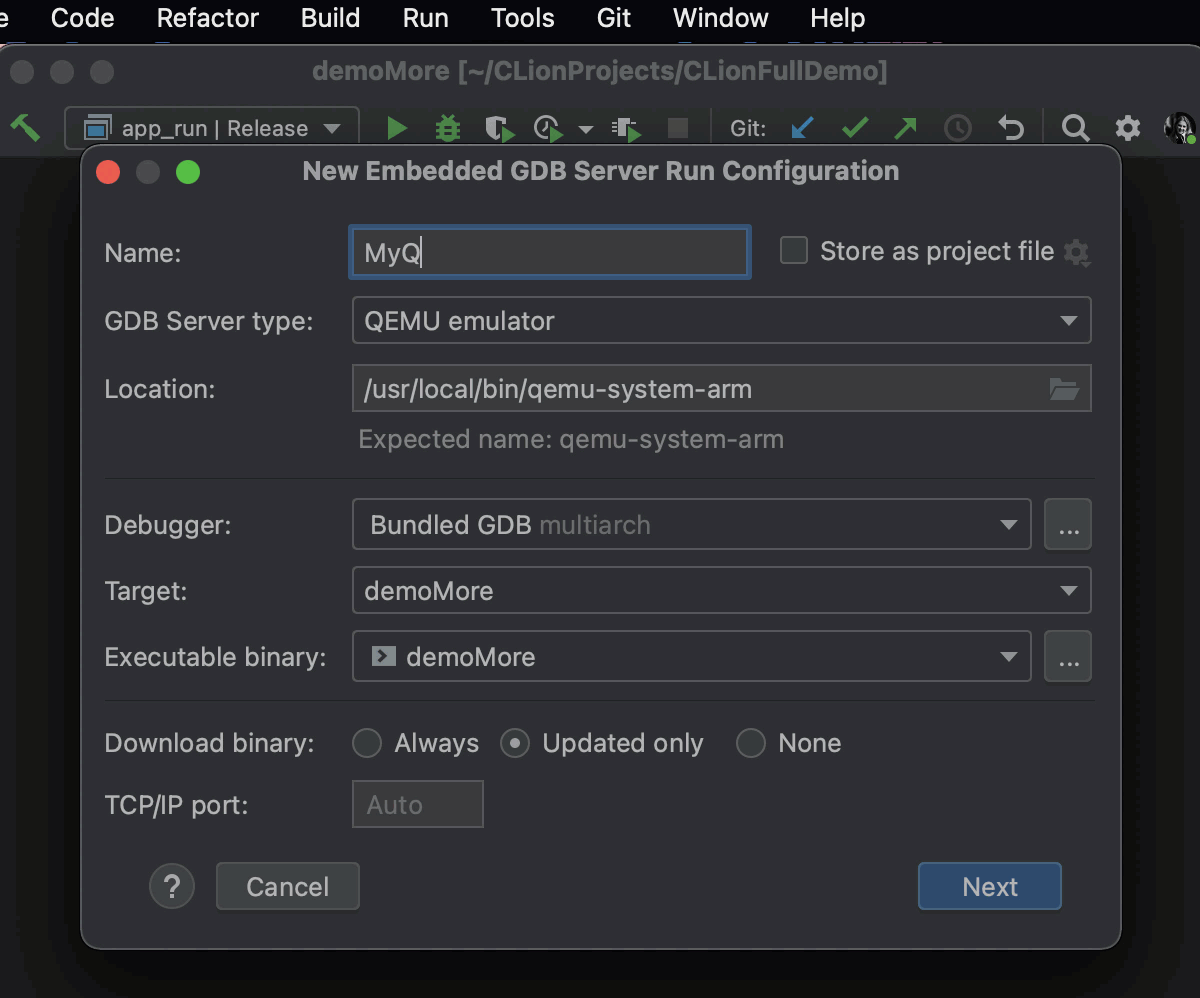 We’re continuing to make code analysis in CLion more accurate. Along with fixing many issues and removing incorrect warnings, we also implemented Interval analysis. This analysis is a part of data flow analysis and it calculates the upper and lower bounds of the possible values for every integral variable. This knowledge allows CLion to catch various potential issues in the code. The most notable situation is Array index is out of bounds. It reports variables that access an array or allocated buffer via the index, which may be out of bounds. It also helps with C-string and C++ std::string:

Clang-Tidy has been integrated into CLion for a long time. In this release, we made the integration even more convenient. For example, if you’d like to know which exact Clang-Tidy configuration CLion is using to analyze the current file, you can open and edit it via a new Clang-Tidy widget. If there is no file with these settings, the widget will help you create one:

If you are more interested in dynamic analysis, which happens when the program is launched, there are a few enhancements to the Valgrind Memcheck integration into CLion.

In CLion 2022.2, we’ve enhanced the way configuration issues are reported. CLion now notifies you when Valgrind Memcheck is launched for the release configuration and the debug information is missing for the executable as a result. Previously, CLion failed silently in cases like this.

We also removed incorrect errors shown when Valgrind is launched in remote mode.

Integration with Space is now bundled into CLion 2022.2 and allows you to browse Space projects and clone repositories, then start working on them directly: 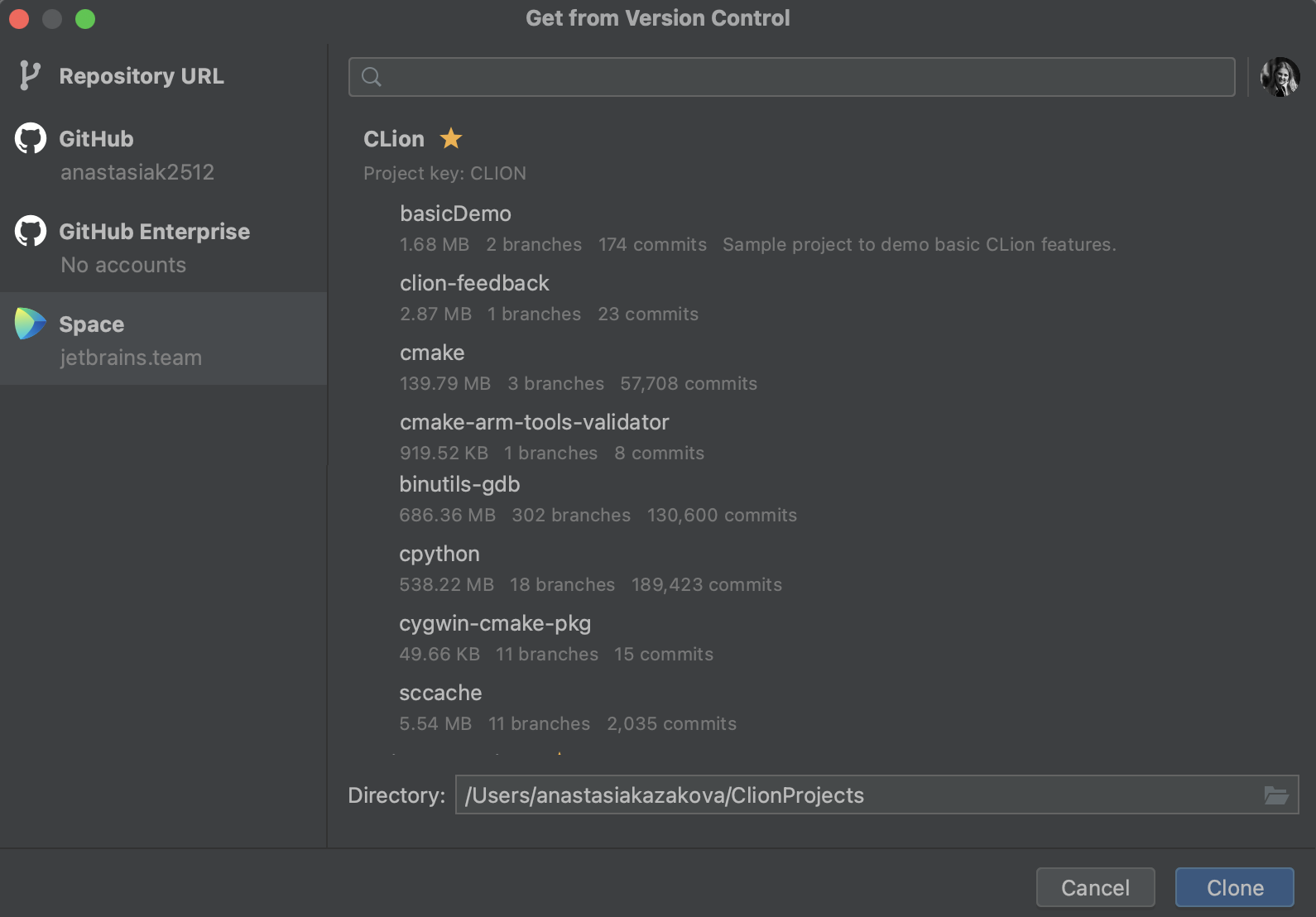 When your changes are ready, you can create a merge request and perform a code review from within the IDE:

The IntelliJ Rust plugin also has a lot of useful enhancements in the new version. Learn more in the Rust blog.

That’s it for now! We encourage you to give CLion 2022.2 a try. If you have an active subscription, you can update today. Otherwise, we invite you to start your free 30-day trial to check out the new features and see what you think!