We’d like to give a preview of updates to JetBrains .NET product line that will become effective as soon as ReSharper 9 and other JetBrains .NET tools are released in coming weeks.

TL;DR: ReSharper editions (C#, VB.NET and Full) are going away. Instead, the ReSharper product line will now consist of 3 items:

Please see details below, along with answers to some of the questions that we expect to be asked.

How exactly is the set of ReSharper products going to change?

Starting with the release of ReSharper 9 next month, C# Edition and VB.NET Edition are going away, Full Edition becomes referred to as simply ReSharper, and two additional products become available. The diff looks as follows:

Here’s how the new products relate to each other: ReSharper and ReSharper C++ are distinct products but ReSharper Ultimate unites them and adds other .NET tools: 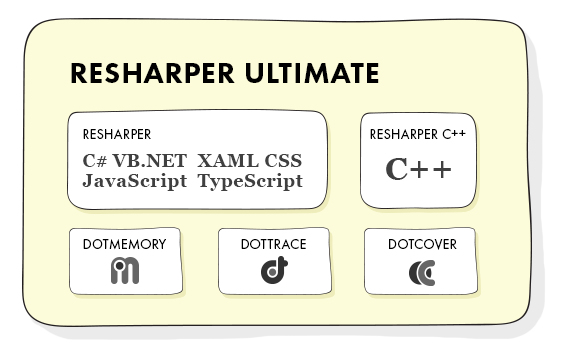 There are two major reasons behind introducing these changes:

What is ReSharper Ultimate?

Purchasing licenses to separate products will also be possible. For example, if you don’t need ReSharper but you need dotCover, dotMemory or dotTrace, you will still be able to purchase them separately. However if you need more than two of these tools, and also if you need any of these tools and ReSharper, then ReSharper Ultimate would be the easier and most probably the cheaper way to go.

There are several reasons why purchasing ReSharper Ultimate licenses can be beneficial:

What if I want my ReSharper to support both .NET languages and C++?

If this is the case, you have two options:

ReSharper C++ release however is going to be delayed

While ReSharper 9 and updates to other .NET tools are expected to be released in early December, ReSharper C++ will not reach release quality by this time and will only be available as Beta. The ReSharper C++ team expects to deliver the final release in early 2015.

Therefore if you’re looking to purchase a license to ReSharper C++, you have the option to either hold off until the final release of ReSharper C++ (and use the free Beta before it goes live) or purchase ReSharper Ultimate that will cover ReSharper C++ as soon as the latter goes live.

Will I be able to upgrade my existing ReSharper Full/C#/VB.NET license to ReSharper 9?

However if you have a ReSharper C#, VB.NET or Full Edition license with a free upgrade subscription that is active by the time of ReSharper 9 release, you’ll be able to upgrade to ReSharper 9 for free.

Will I be able to upgrade my existing ReSharper Full/C#/VB.NET Edition license to ReSharper 9 Ultimate?

Yes, you can upgrade to ReSharper Ultimate from your current license at any time for an upgrade fee.

Will I be able to upgrade my existing dotTrace/dotCover/dotMemory license to ReSharper Ultimate?

For how long will I receive free updates for the products covered by ReSharper Ultimate license?

Every ReSharper Ultimate license includes 1-year subscription to all updates across all tools that it includes. After your subscription expires you can continue using the latest installed versions of the tools, and you will be eligible to receive free bug-fix updates as well (those that have 3 digits in version number).

The considerable changes outlined above can be hard to understand, and communicating them is not an easy task as well. If you have any questions, please ask them in comments, and we’ll try our best to clarify.