After we announced the dotMemory Unit framework, the most frequently asked question was, “When will the standalone launcher for CI be available?” Finally, the time has come! Along with dotMemory 4.4, we have also released dotMemory Unit 2.0 which contains not only a lot of improvements but also the dotMemoryUnit.exe tool.

The tool (distributed as a zip archive*) works as a mediator: it runs a particular standalone unit test runner under a profiler and provides support for dotMemory Unit calls in the running tests.

*Important! If your domain policy is to treat files from the Internet as unsafe, don’t forget to unblock the zip file by clicking the Unblock button in file properties.

For example, this is how you can run NUnit tests from some MainTests.dll file:

Now, it’s easier than ever to make memory tests a part of your continuous integration builds. Simply add the command shown above as a build step on your CI server, and it will run your tests with the dotMemory Unit support. 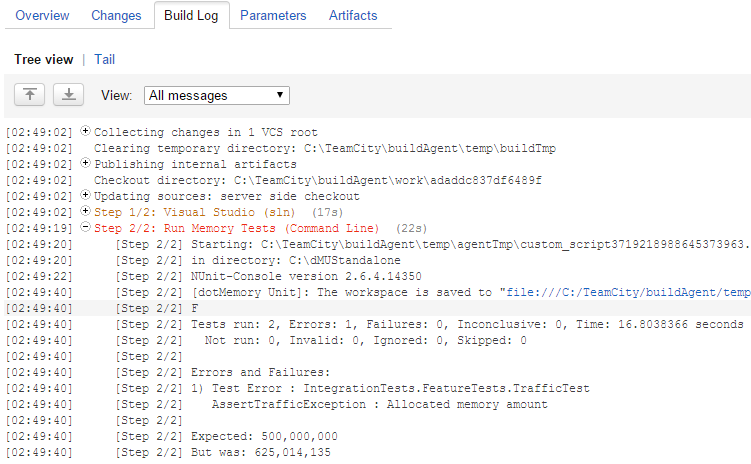 However, if you’re a TeamCity user, we can offer a much more convenient solution.

Along with dotMemory Unit 2.0, we release the plugin for TeamCity that adds support for dotMemory Unit to all .NET test runner types. Let’s take a more detailed look at how this works.

TIP! If you want to take a look at a working example, here is a sample build project on our public TeamCity server. Project build configuration is available at this link.

From the point of the end-user, nothing has changed. If you run the configuration and any of the memory tests fails, the results will be shown in the overview:

The Tests tab will show you the exact tests that have failed. For example, here the reason had to do with the amount of memory traffic:

Click on a failed test to see exactly was has gone wrong:

Now, you can investigate the issue more thoroughly by analyzing a memory snapshot that is saved in build artifacts:

Note that to open memory snapshots, you will need a standalone dotMemory (or ReSharper Ultimate) installation. 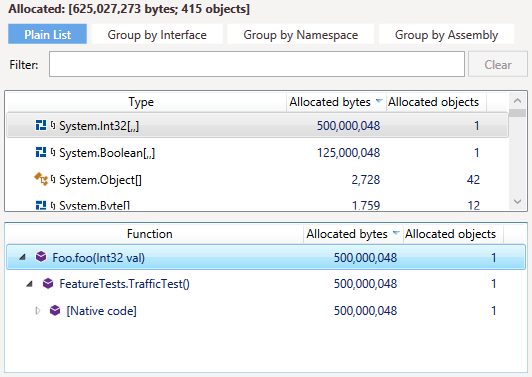 If you’ve used dotMemory Unit before, you probably know that it required ReSharper unit test runner to work. Since v2.0, you can also run tests via dotMemory Unit’s standalone launcher and the list of supported unit testing frameworks has expanded to include:

*Can also be run from Visual Studio with ReSharper

Nevertheless, if your unit testing framework is missing from this list (e.g., MSpec), you can still use it with dotMemory Unit.

We recommend that you create an IDisposable class that uses these methods, and then wrap the code in your tests with the using statement that creates an instance of this class:

That’s it! Now you can run tests wrapped in this way using dotMemory Unit standalone launcher or Visual Studio with ReSharper (in case it has the extension for the unit testing framework you use). Simply copy & paste the code above and reuse it in your project. You can also find this code on github.

Thanks for reading! As always we recommend that you try dotMemory Unit on your own. If you’re already using it, then probably automating your tests on a CI server is the next logical step.