ReSharper Build is a new feature in ReSharper 10 that will reduce the time it takes to build your solution. It replaces Visual Studio’s build management with a system that applies heuristics to only build projects that need updating. Note that it doesn’t replace MSBuild — your projects are still built normally. They’re just not built as often.

In this post, we’re going to take a deep look at how ReSharper Build works, and how you can make use of it in your own solution.

The benefits of a faster build are obvious — we all want to speed up the development feedback cycle. No one wants to be interrupted when they’re in the flow, and a slow compile can be a real productivity killer. The quicker we can get a solution rebuilt, the sooner we can get feedback from our tests, and the sooner we can move on to new code, or fix up tests. And if this happens quickly enough, we stay in the zone, and remain productive.

Furthermore, ReSharper Build is also an important part of another new feature — Continuous Testing. This is a feature of dotCover and ReSharper Ultimate which intelligently runs only the subset of tests that cover the code that you’ve just changed. In order to be able to do this, we need to be able to build the changed code as quickly and efficiently as possible. We’ll take a closer look at Continuous Testing in a future blog post.

Some of you power users might recognize ReSharper Build’s heritage — it’s the latest evolution of a (somewhat) hidden/internal feature that we’ve been using on the development team for several years. When the uber-solution to everything that makes up ReSharper Ultimate is 600 projects, and the everyday solution for feature development can be as large as 300 projects, you need something to speed the build up!

How does ReSharper Build work?

Put simply, ReSharper Build manages the build process, and decides if each individual project needs to be built, or not. When building a solution, if a project doesn’t need to be rebuilt, it is intelligently skipped — what’s faster than doing nothing?

There are three main optimisations:

How do you use it?

It’s very easy. Once enabled, ReSharper Build replaces and overrides the standard Visual Studio build process, and is invoked whenever a build is required — building, rebuilding or cleaning the solution, running or debugging the project, or running unit tests. ReSharper Build is disabled by default, meaning you have to opt-in to the new build management (there are some edge cases that can cause issues, particularly custom build steps, so we’ve decided that you need to make an explicit step to opt-in. See below for more details). 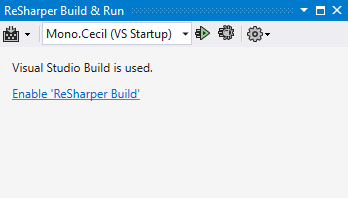 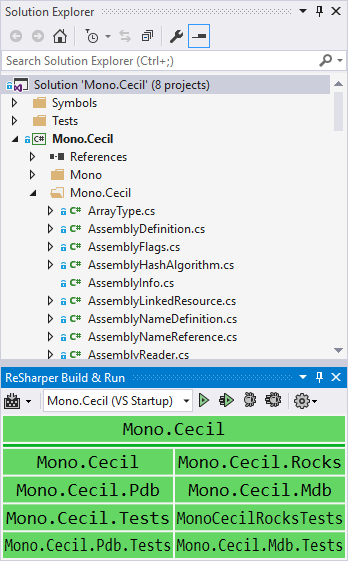 Once enabled, the ReSharper Build & Run tool window will show all of the projects in the solution, as coloured boxes. The colour of each box represents the state of the project, such as not requiring build, excluded from this build, skipped, built with errors, or successfully built. There are several more states available, and hovering the mouse over a project will display a tooltip explaining the state.

Once a build completes, any output from the build (errors, warnings, info and messages) are displayed in the ReSharper Build Results tool window, from which you can double click to navigate to the warnings and errors. We are still working on the UI during the EAP, so expect this window to change, as we will be adding support for keyboard shortcuts, and also grouping results.

Update for RTM: The Build Results tool window was removed from the final RTM release of ReSharper 10.0. We didn’t get the design and feature set finalised and working well enough to be included in this release. Instead, we have rolled back to the prototype implementation, which will automatically display build results as a tab in the Find Results window. While this location might seem a little surprising, ReSharper displays the window automatically, and whenever you double click one of the projects in the Build & Run tool window. Furthermore, the Find Results implementation offers more features, including grouping, filtering and keyboard shortcuts. The standard Visual Studio F8 and Shift+F8 shortcuts will navigate the errors, as will ReSharper’s standard previous/next shortcuts Ctrl+Alt+PageUp/PageDown (Ctrl+Alt+Up/Down for IntelliJ shortcut users). We will be re-evaluating how we display build results for a future release.

When running tests, launching an application for debugging, or right clicking and selecting Build on the project’s context menu, ReSharper Build is invoked on a subset of the solution, and only processes those projects. Any other projects that need rebuilding are ignored, and marked in blue, showing they will be rebuilt in the future.

Similarly, ReSharper Build is available under the ReSharper → Build menu option, which allows for building, cleaning and rebuilding the solution. It also offers menu items to just build, rebuild and clean the current selection. You can also cancel the current build, if it’s taking too long (although we don’t expect this to get used much). 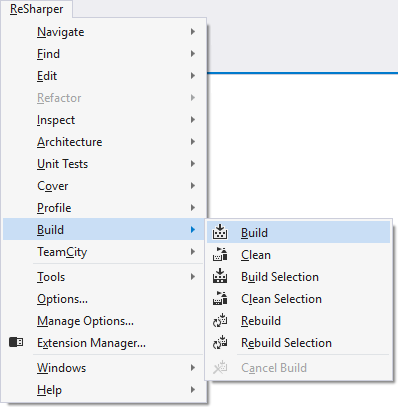 Update for RTM: The ReSharper → Build menu item has been removed – all options are already available on Visual Studio’s Build menu, with the exception of building a selection. This can be achieved from a project’s context menu, or automatically by ReSharper when building before running tests.

ReSharper Build can be configured from ReSharper Options (ReSharper → Options → Build, or by clicking the “spanner” options icon in the ReSharper Build & Run tool window). You can set which version of MSBuild to use (Visual Studio’s, by default) and how many MSBuild processes to run for parallel build. 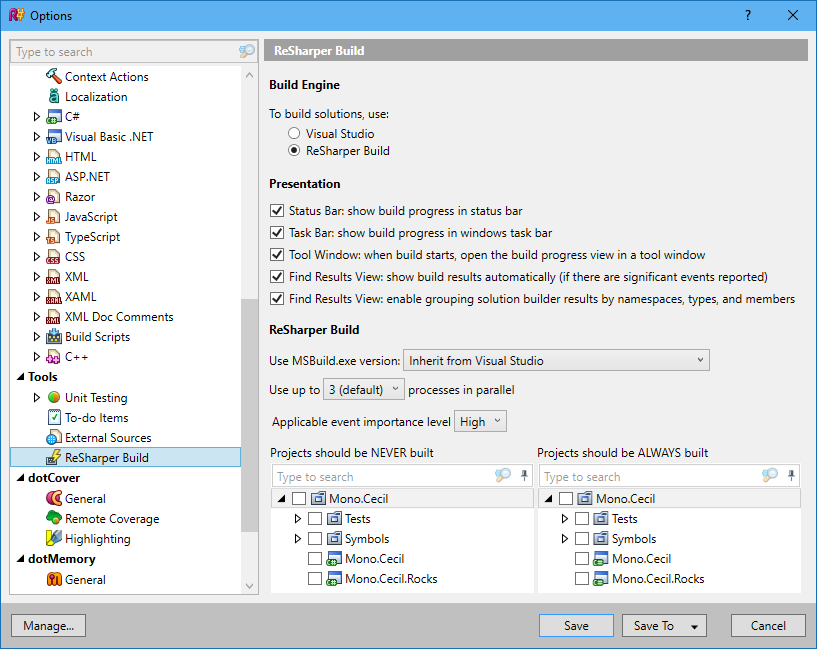 Excluding a project means it won’t get rebuilt, ever, even if source files are out of date or a referenced project has public API changes. This is quite drastic, and can lead to uncaught compilation errors, but can be useful to temporarily exclude a project that is slow to compile, and not used in your current development task. It’s similar to unloading a project in Visual Studio so that it doesn’t compile, but the source files are still available to ReSharper to allow for navigation and refactoring. We recommend reenabling and rebuilding before committing to source control, or using Solution Wide Analysis to show compile errors as you type!

Marking a project as “always build” tells ReSharper Build to never apply heuristics to this project, but to always pass it to MSBuild. This does not mean that the project will always be rebuilt and recompiled, but it means MSBuild is always called — MSBuild will still check timestamps and might perform an incremental build. This is useful for projects that have custom build steps that ReSharper Build can’t track (although it would be better to rewrite the custom build steps as proper MSBuild targets that support incremental build. See below).

There are a couple of technical limitations that are due to ReSharper Build being based on MSBuild:

As well as continuing to work on the UI, there are still a couple of known issues. If you encounter any other issues, PLEASE let us know!

And finally, a small tip to finish up — ReSharper Build monitors the public API surface of your assemblies. To reduce unnecessary builds, consider using “internal” instead of “public”. If a class, interface, method, etc. isn’t actually required to be public, making it internal reduces the API surface being monitored, and will reduce the number of unnecessary rebuilds.

We are very excited to launch a new feature such as this. We’re hoping it will have as much of a positive impact on your build times, as ReSharper has had on your development experience.

Please download the latest EAP and try it out with your projects, and PLEASE let us know if you encounter problems. This is why we run the Early Access Program — to get feedback on products before they’re finalised, to find issues before we release. Let us know if it’s working for you, and especially let us know if it doesn’t!