All ReSharper Ultimate tools bumped up to version 10

If you have started to use ReSharper 10 EAP (build 4 or later), a strange detail might have caught your attention: 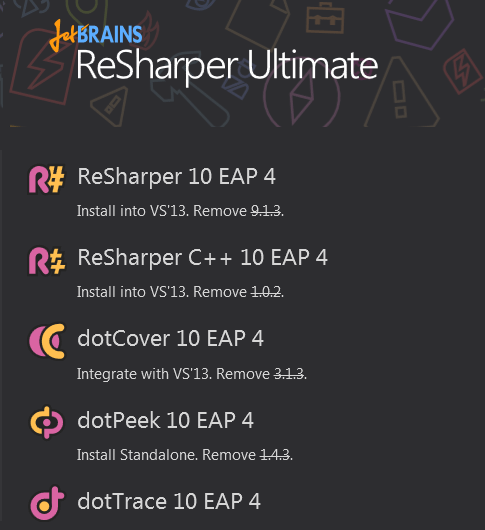 Wut? Is it a bug? OK, ReSharper was meant to be versioned 10 but other Ultimate tools clearly weren’t.

Well, there’s no mistake. We have decided to align versioning across the entire ReSharper Ultimate family starting with ReSharper version 10.

Also, by virtue of this uniform versioning, we can finally refer to the entire set of tools as ReSharper Ultimate 10.

Granted, it’s bizarre for some products to make a switch like this: for example, dotPeek jumps from 1.5 to 10 and ReSharper C++ leaps from 1.1 to 10.

However, there’s a legitimate reason behind this.

Before last year, ReSharper, dotCover, dotTrace and other JetBrains .NET tools used to evolve more or less independently from each other, without much coordination. This all changed with the advent of ReSharper Ultimate, which brought a common installer, a common set of assemblies shared between all tools, a synchronized release cycle and unified licensing.

Along with all the advantages of the new approach, it brought a new restriction: if you were to use multiple tools from the ReSharper Ultimate pack, you could only use versions released simultaneously. Installing, say, ReSharper 9.1 released in April 2015 alongside dotMemory 4 released in December 2014 wasn’t possible anymore: you had to make sure that versions you installed were aligned in terms of release dates.

However, disparate versioning used by different ReSharper Ultimate tools didn’t help anyone figure out which versions were compatible and which were not.

Taking all this in mind, we sat down and thought, which of the two main considerations behind versioning was more relevant at this point in ReSharper Ultimate history: a way to indicate which releases of each particular product had more important changes than its other releases, or a way to unequivocally identify which ReSharper Ultimate products were guaranteed to work alongside each other.

In the end, although it wasn’t apparent to everyone and took quite a while to agree on, we figured that the latter was more important today and going forward.

In practical terms, the new versioning should be read as follows:

While we realize that this change is somewhat unorthodox, we’re really hopeful that in practice it helps you figure out more easily which combinations of ReSharper Ultimate tools are safe to be used together.