ReSharper makes a clear delineation between the concept of a formatter (a component that changes the way code looks but does not change the syntax) and the code style settings, a piece of functionality that can, in fact, change syntax without changing the semantics. This blog post covers the updates to the code style settings that appear as part of ReSharper 10.

For example, no keyword has caused more C#-related holy wars than the ubiquitous var. Well, ubiquitous for some, since many people still prefer to hold a belief that var is a form of obfuscation. The choice of using or not using var is, of course, personal, and so it makes sense for ReSharper to provide settings for controlling how things like var, this. qualifiers, and other constructs are used in code.

These Code Style Settings exist in many languages: ReSharper supports them in C#, VB.NET, JavaScript/TypeScript and, of course, C++. Each of the settings generally consists of three distinct parts:

That last option, the one used for notification, essentially controls if and how the existing code is treated by ReSharper. For example, adding a redundant this. not only gets ReSharper to ‘gray out’ the redundant prefix, but offers extensive options for fixing the problem:

Since this. is a piece of redundant code, ReSharper offers an extra option here to remove all redundancies. Naturally, both of the presented actions support the Fix in Scope mechanic, so they can be applied to the entire file, folder, project or solution.

Note that, in the above, you can disable the inspection completely by choosing the Do not show option. It’s also worth noting that the above configuration feature applies to any kind of inspection, not just those related to code style!

And while we’re on the subject of the Alt+Enter menu, check out a recently added option called Format Selection. Nothing to do with Code Style but still very cool (and yes, it re-formats the selected code according to your preferences): 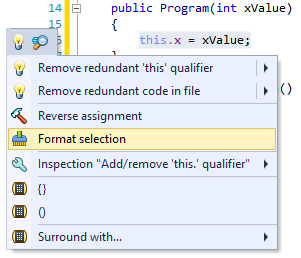 Now, for a look at some updates in ReSharper 10 specifically.

First of all, there are now settings for Attribute placement, so you can choose whether to keep attributes on a single line or several lines.

Furthermore, not only is ReSharper smarter in removing the parentheses, it can help you insert those that clarify the operations. This is what the nearby Add parentheses to avoid non-obvious precedence feature is for. First of all, you can specify what operators you want to clarify:

And, with this setting, you can move to an expression, press Alt+Enter and ReSharper will insert the relevant operators for you:

Finally, ReSharper lets you take control of access modifiers: you can now specify whether you want explicit or implicit private/internal modifiers, and you can also control the order of modifiers that you’d prefer to appear next to an identifier: