Today we welcome you to download our last pre-release build of ReSharper Ultimate 2017.1 and check out all new features and improvements that we’ve been working on since the beginning of this year. In the previous builds we fixed important bugs and added new features that mostly relate to perfecting support for Visual Studio 2017 RTM and C# 7. Today’s EAP build includes noticeable updates to dotMemory, dotPeek and a few other improvements that we are going to cover in this post.

dotMemory 2017.1 introduces a console profiler. The dotMemory.exe tool allows configuring and running profiling sessions right from the command line. The tool is a perfect fit when you need to automate the process of gathering memory snapshots in the following cases:

See how easy it is to take a memory snapshot of a running application (with 6844 PID):


or to run an application and take a snapshot only when memory consumption increases by 50%:

The dotMemory.exe tool also allows taking snapshots by a command sent to stdin or by using the profiling API. The most basic tool usage scenarios are described in our Help.

Finding usages of a specific interface or type becomes even more convenient with a new option in Find Results window to group by kind of usage. There are certain usages like Type conversions which you may want to pay special attention to during the development process. And grouping helps here a lot. The filter was also updated so that you can select specific usage occurrences. 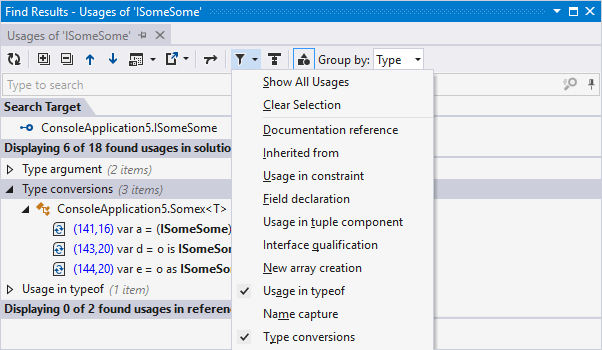 Go to Everything receives an option to filter the results using a special syntax. Just type ‘/’ to see all available filter options: 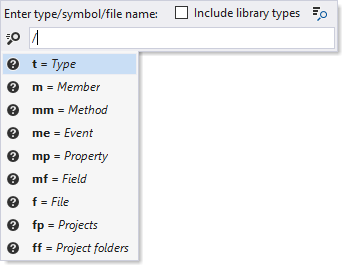 All in all, ReSharper 2017.1 brings lots of enhancements to code formatting. EAP 6 adds two more options:

dotTrace timeline profiling of ASP.NET Core Web Application started to work with the new version of CoreCLR. If you were affected by this issue you need to upgrade your project to use .NET core 1.1.1.

We fixed issue with profiling Silverlight applications (PROF-634) by redesigning Core API so that now it supports all targets: Desktop (both Core API and Self API), Silverlight and CoreCLR. WCF profiling in Visual Studio 2017 RTM is now also supported (PROF-636).