One of the downsides of asynchronous code is it’s extremely difficult to profile it and analyze its performance. This is because, when an asynchronous method is executed, control is switched from the method to its caller and back, tangling the resulting call tree.

The good thing is that dotTrace 2017.3 dramatically simplifies the analysis of asynchronous code. It marks all async call nodes in the Call Tree and groups the corresponding await time and continuation code under that node. This means that you can quickly find all “parts” of an asynchronous call in one place instead of searching in different call stacks. Note that currently, this functionality is available only for the Timeline profiling mode.

To better understand how dotTrace 2017.3 treats asynchronous code, consider the following example (the code is shown on the left, the corresponding Call Tree on the right):

Note that the call tree contains two call stacks. This is what really happens on the CLR:

As you can see, there is no obvious link between the async call and its callback. (In a real application, things would get even worse because of a more complicated call stack.) So, how does dotTrace help with asynchronous calls analysis?

If we expand the async RunAsyncOperation call node in the Call Tree, we will see the following:

All “parts” of the asynchronous call are shown inside the async RunAsyncOperation node:

Identifying the slowest async calls in Methods and Subsystems

As you can see, the total async call time does not include the time of all its parts in the Call Tree. But what if you want to quickly identify the ‘hot spots’ – the slowest methods in your app? For this kind of task, it would be better if the async method’s total time contained the continuation code. This is actually true for the Methods and Subsystems list. 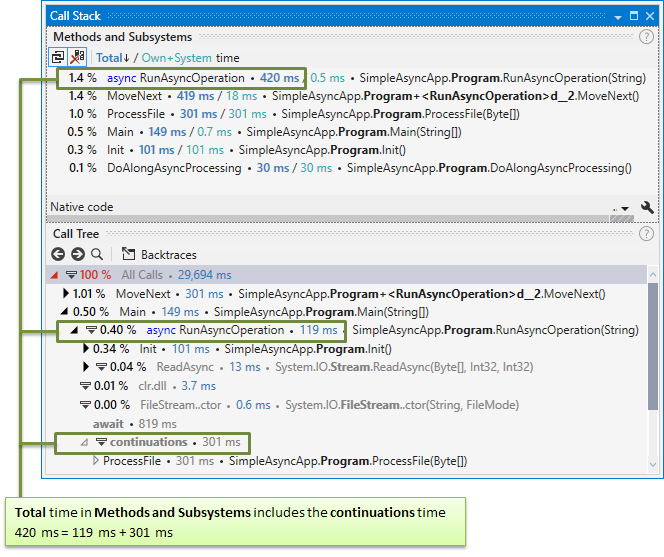 After you apply a filter by the call time of the async method, dotTrace will leave only the time intervals where the method was executed excluding the continuation code intervals. You can add these intervals (as well as the await time node) to the filter by clicking the corresponding check-boxes that appear in the Call Tree.

Note that if you apply filters so that the continuation code is out of scope (e.g., a filter by Main thread), the Continuations check-box will not be shown.

The functionality described above works not only with async/await, but with all tasks based on the Task class. The Run node contains the Task execution node with the task delegate:

Last but not least, the Call Tree works with call times as well as with all other types of events supported in the Timeline profiling mode, such as memory allocation or exceptions. For example, you can view how much memory a particular async method allocates:

To see for yourself that profiling asynchronous code is now easier than ever, download and install ReSharper Ultimate 2017.3 EAP. Let us know how it works for you – your feedback is greatly appreciated!