Posted on December 12, 2017 by Maarten Balliauw

In the latest Rider 2017.3 EAP builds, we have been hard at work improving the test runner experience. We’ve added a couple of new actions to re-run failed tests and repeat tests until failure. The Tests menu is now a separate menu entry, featuring all test runner actions. Filters are now visible based on context. Various UI improvements were made, making the test runner tool window nicer to work with.

Several bugs were fixed as well: when a filter is set (e.g. “show only failed tests”), unit test actions now use this filter. Some problems with NUnit on Linux and macOS were resolved as well.

Let’s look at a few of the unit test runner improvements!

When a test fails, we typically want to be able to quickly run it again after making a code change, to see if it passes. Both the toolbar as well as the Unit Testing quick list (Shift+Alt+U in Visual Studio keyboard scheme) now allow to Rerun Failed Tests (Ctrl+U, F). 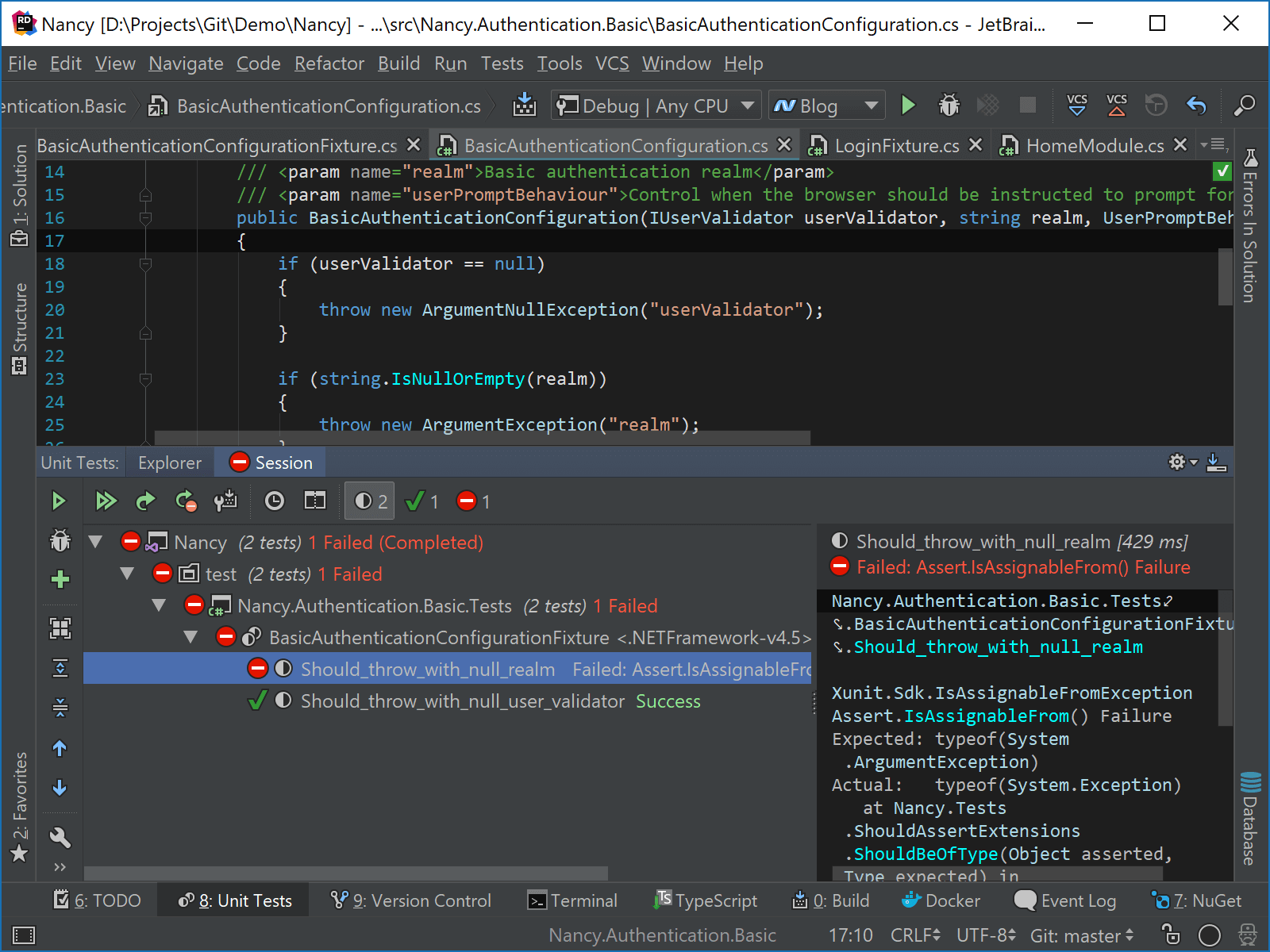 Imagine having a test that is green and passes 99.9% of the time, but every now and then fails – a so-called “flaky test”. Instead of having to manually re-run the test over and over again, Rider 2017.3 now comes with a new action Repeat Tests Until Failure which lets us continuously run a given test session until one of the tests fails. This helps in reproducing the “red test” situation locally and checking out the logs. 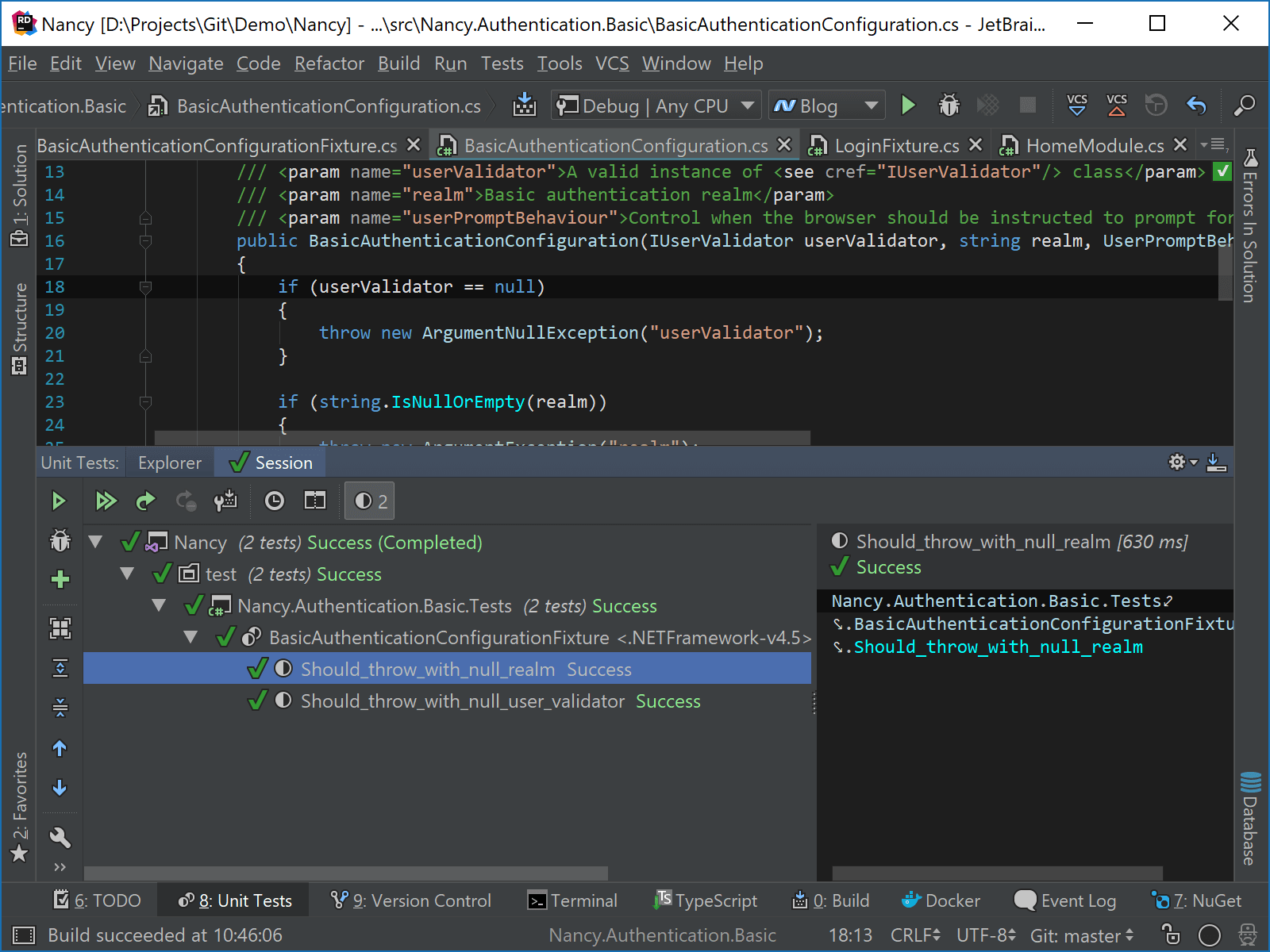 A number of improvements were made to the unit tests tool window UI. For example, the filter panel now only displays filters that are applicable. In other words: there will not be a “show only failed tests” filter when all tests succeeded:

We have moved the Tests menu from Tools to its own top-level menu. Context menu entries have been re-ordered and extended: actions for Show source and Copy are now available.

We also made various small UI fixes, such as removing of unnecessary toolbar buttons (e.g. rename test session which is now only available from the context menu), double borders, etc.

The Unit Testing quick list (Shift+Alt+U in Visual Studio keyboard scheme) is now also context-aware and displays different entries when invoked from the editor or from the unit test tool window. 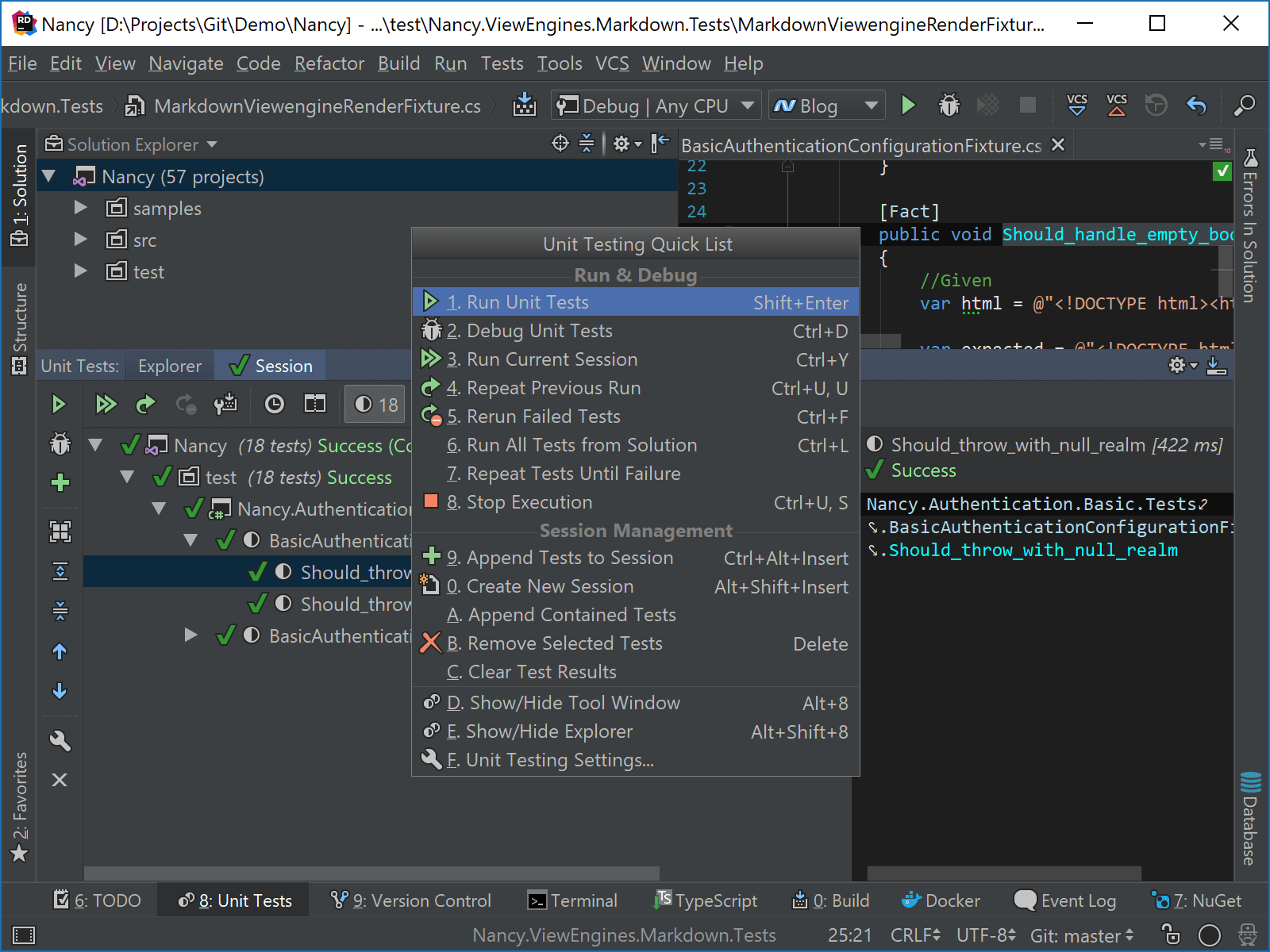 Note that the available actions can be configured from Rider’s settings under Keymap, then Tests | Unit Tests Tool Window Actions.

Several keyboard shortcuts were added to the unit test tool window. When browsing a unit test session, we can now use the Delete key to remove a test from the current session, Shift+Enter will run selected tests and Ctrl+D (Command+D on Mac) will debug selected tests.

Also when browsing a unit test tree, we can just start typing to search for a given unit test. Rider will now search in all nodes, even when they are not expanded. 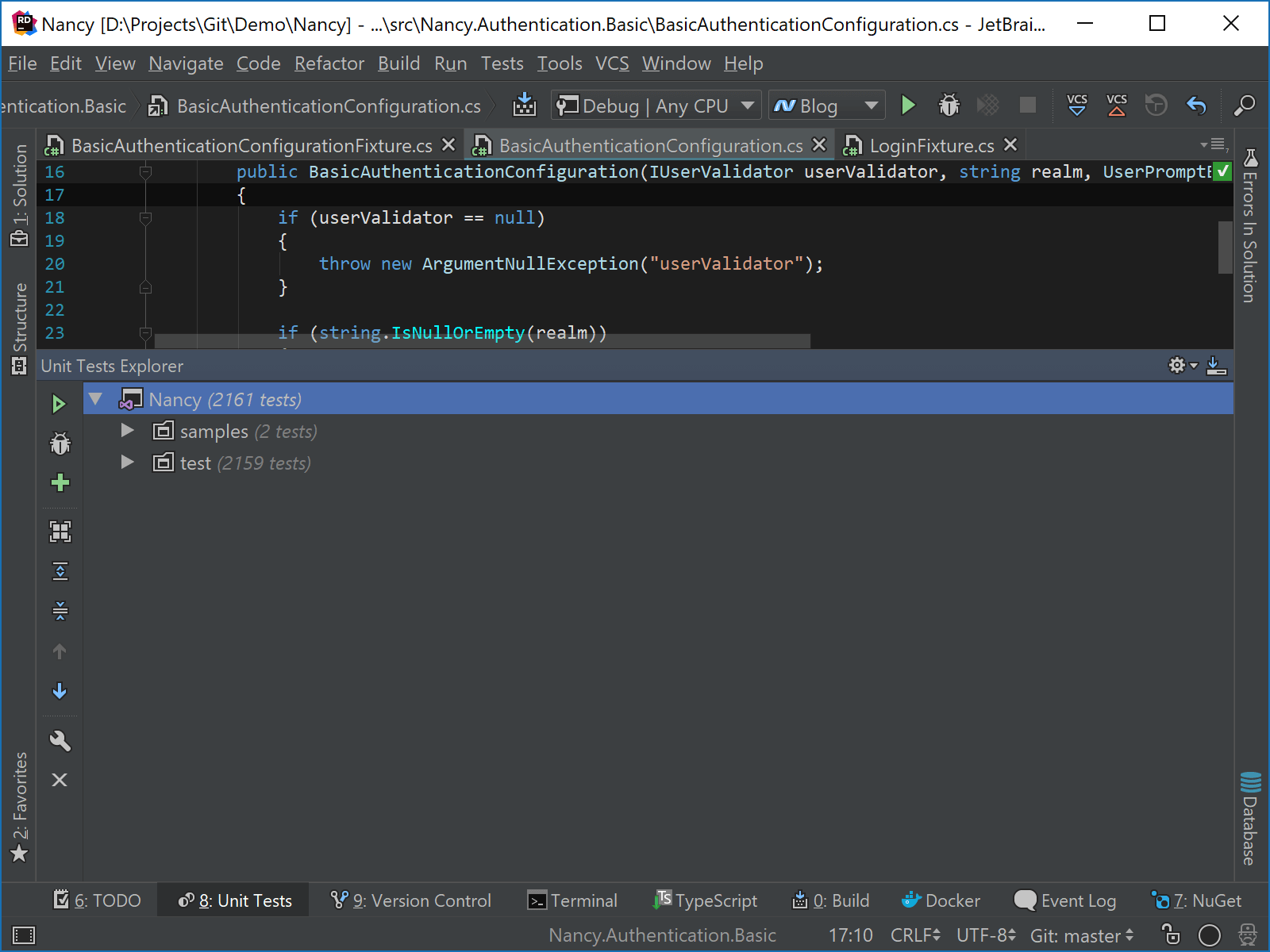 Give Rider 2017.3 EAP a try! We’d love to hear your thoughts and comments.

The recording of our webinar, Xamarin, MAUI and the reactive MVVM between them, with Rodney Littles, II, is now available. Subscribe to our community newsletter to receive notifications about future webinars. Xamarin Forms is the .NET cross platform technology that allows you to write an application in C# and target various operating systems, primarily mobile. The recommended architectural approach for .NET applications adhering to SOLID principles is Model-View-ViewModel (MVVM). ReactiveUI is a MVVM framework based on Reactive Extensions, which are a cross language approach to functional pro
Posted on September 18, 2020 by Maarten Balliauw 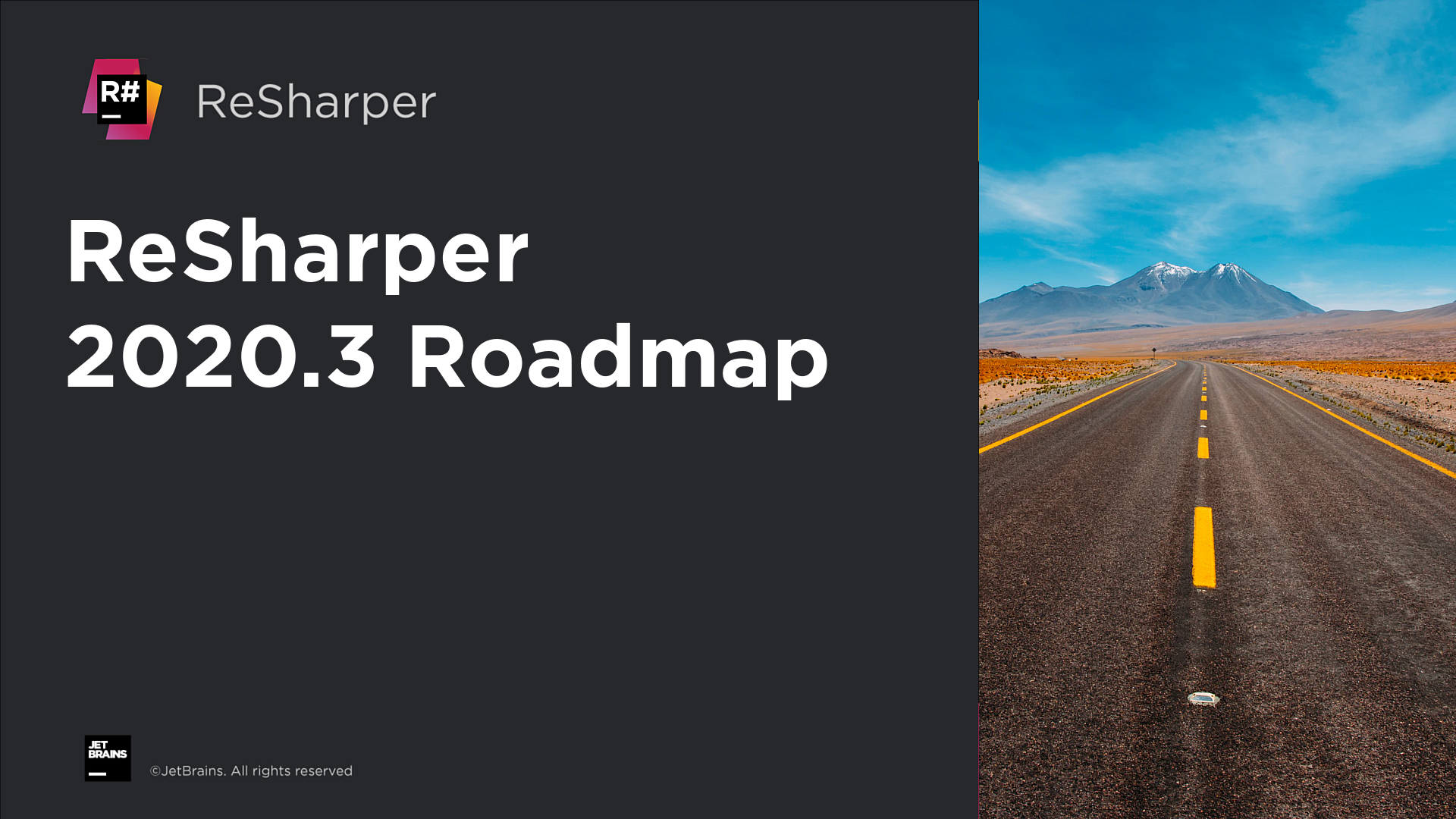 In this post, we’d like to share our plans for ReSharper 2020.3 and find out what we can do next to improve your development experience. Your feedback is always welcome! The following is a list of our priorities for the next release cycle of 2020.3. Note that these are features we’re working on – as opposed to features scheduled for delivery. Some of these might come with later versions. .NET and C# – Support for new platform and language features, like top-level statements or target-typed new expressions. We will extend our support for nullable reference types (NRT), for instance with a dedi
Posted on September 15, 2020 by Matthias Koch
Subscribe