We all have experienced the effort and time it takes to rename a project in a solution. We have to update folder and file names, adjust namespaces, fix various references, and usually yell at our computer to make things work. All that work takes a lot of iterations and can be frustrating.

What if the IDE could do that work for us? The latest Rider 2018.3 EAP build comes with the rename project refactoring! Let’s now look at the details.

We will be looking at an ASP.NET Core 2.1 Web API solution that has a number of projects. Originally, the solution had one project that allowed data to be accessed and updated from a Microsoft SQL Server using the Entity Framework Core library. The name of the project is Chinook.Data. Now we want to add an additional project that demonstrates Dapper as the data access library. Let’s create a new .NET Core 2.1 Class Library project in the solution and name it Chinook.DataDapper. With this new project name, we decide that we need to change the original data project to have a distinct name. Let’s call it Chinook.MSSQLData (I know we should have called the refactored project name Chinook.DataEFCore but go along with me). 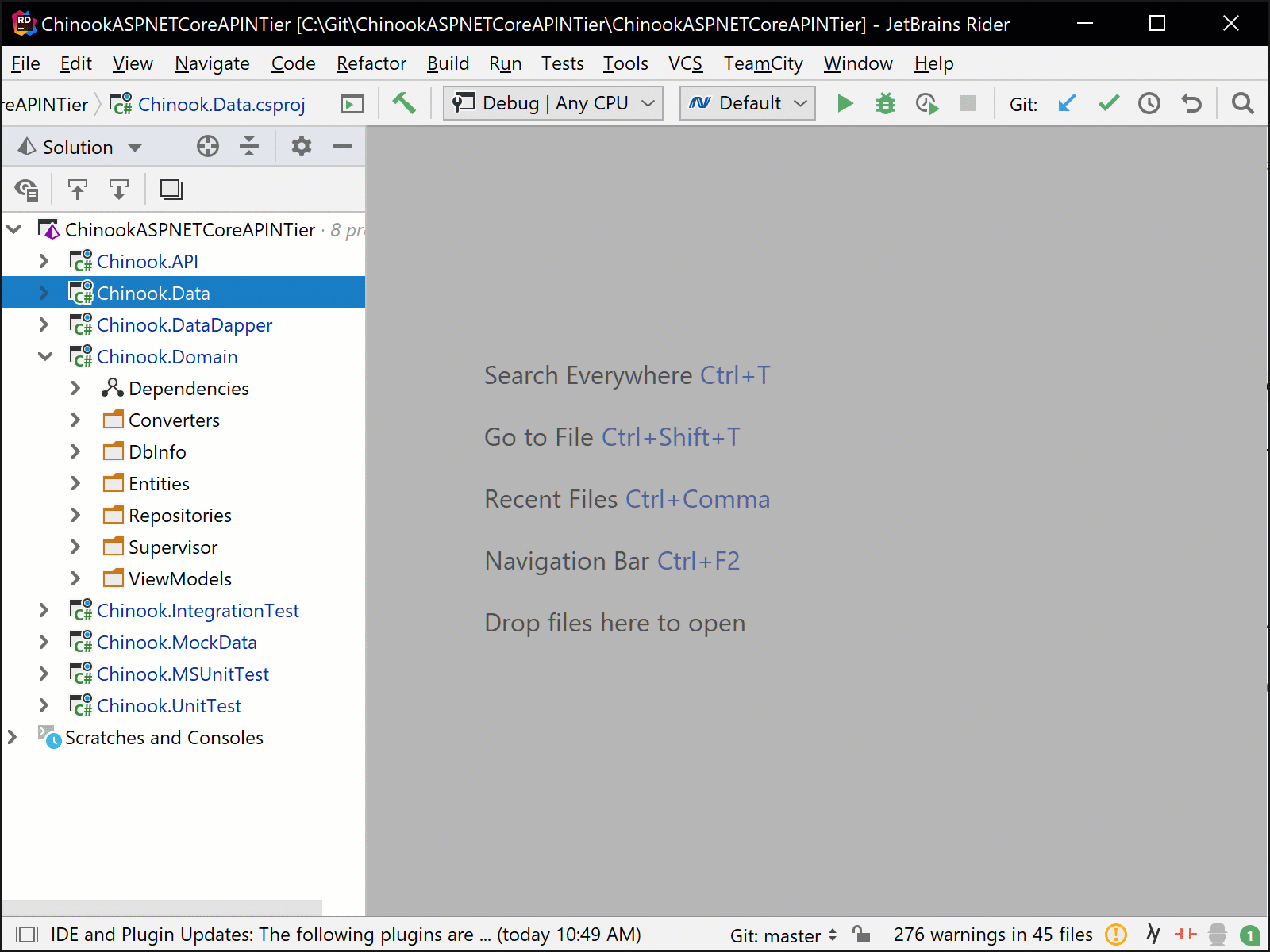 There are three options that can be performed with the renaming of the project. The first option is to have the project folder renamed to follow the updated project name. The second option covers changing the root namespace with the refactoring. That is still experimental so we will not perform that update currently. The third and last option is to have the refactoring find all references to the original project name in comments and string literals throughout the solution and change them accordingly. We will perform the first and third options with our refactoring. 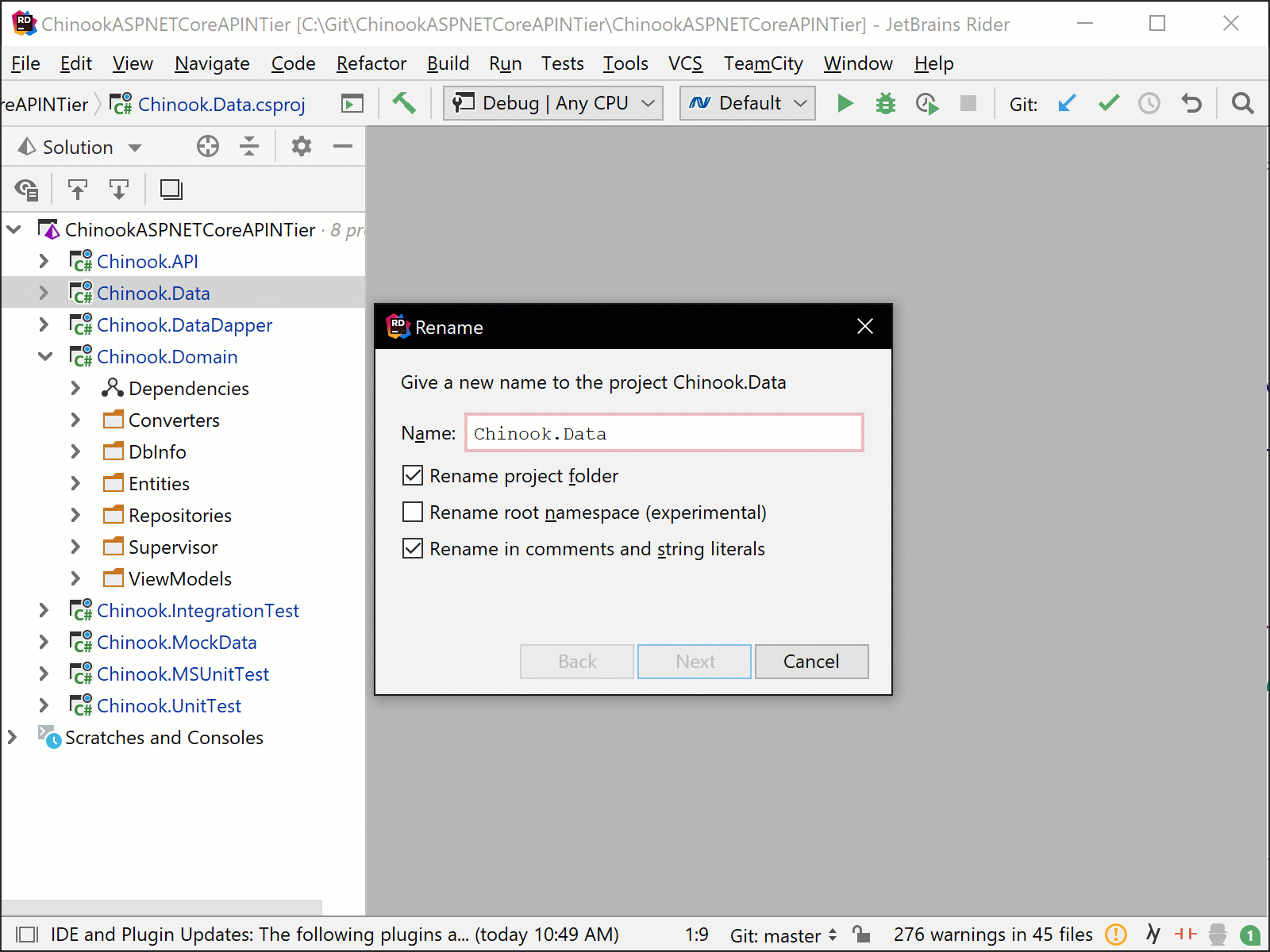 The Project Renaming refactoring will change all references to the project. That will include the following:


There is a lot of work behind the code editor going on and this work will make your life much happier with the new refactoring included in Rider 2018.3 EAP. You can find out more about all of the refactorings at your fingertips in Rider in the Online Help.

As developers, we love tools. But often, too much tooling gets in the way when trying to develop applications quickly. Have you ever been ripping through code when you want to refactor or do a common task, but just can’t find the command for it because there are too many distractions? It’s very frustrating! Let’s take a look at how ReSharper brings back simplicity when using an IDE, with its famous Context Actions - or Alt+Enter - the small but mighty problem-solving shortcut. And keep in mind: Rider builds on top of ReSharper, so these features work there, too! Enter, Alt+Enter! Context Actio
November 30, 2020 by Rachel Appel

With the .NET 5 release comes the newest Entity Framework Core version, unsurprisingly called Entity Framework Core 5 (EF Core 5). The .NET community got its first glimpse of Entity Framework (EF) on August 11th, 2008, with the release of .NET Framework 3.5 Service Pack 1. Let's say a few things have changed since the initial release. For those unfamiliar with the technology, Entity Framework is an object-relational mapper (ORM), helping developers overcome the impedance mismatches between C# and a database instance's schema. Entity Framework has come a long way since its original inception.
November 25, 2020 by Khalid Abuhakmeh
Subscribe