Auto-update to this new release

IntelliJ IDEA will give you the option to automatically update to the new release as soon as it is available.

If you are not yet an IntelliJ IDEA user, you can download the newest version.

Now you can run tests before code analysis finishes. The Run test icon appears in the gutter as soon as you open the file and you can run your test immediately.

Run and debug your code before the IDE finishes indexing

The indexing process in the IDE and running code are now autonomous from each other. You can run or debug the project right away without waiting for the IDE to finish its work.

Rename refactoring for particular cases, like for fields with common names name or id, became faster. Check out this YouTrack issue for more details. 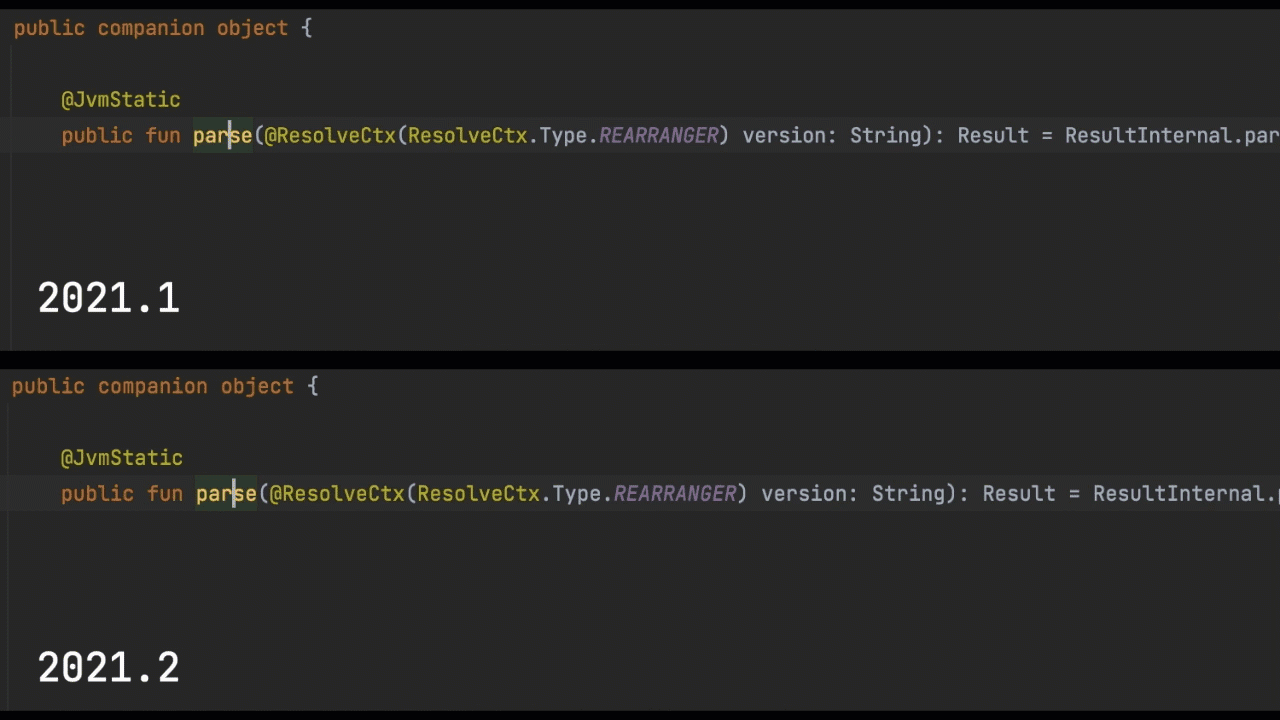 IntelliJ IDEA 2021.2 brings useful improvements and updates to the coroutine agent in the debugger.

Previously, when local variables were not used after passing a suspension point, you couldn’t see their values in the Local Variable table. This helped avoid memory leaks, but as a side effect such variables disappeared in the Variables view of the Debugger tool window. Now you can see the values of such variables for common cases. IntelliJ IDEA also handles other specific cases properly and notifies you when it is impossible to obtain the value.

For example, when you debug through the following code, the debugger shows the message that the x1, x2, x3 variables have been optimized out:

The coroutines agent is now available for Java, Maven, and Spring run configurations with a dependency on kotlinx.coroutines.

Run, debug, and test your code in different remote environments without leaving the IDE.

The Kotlin plugin code has been moved to the IntelliJ IDEA repository. That means that every stable IDE release improves your Kotlin experience and brings you more debugging, refactoring, and IDE-related features.

To contribute to the Kotlin plugin, clone the IntelliJ IDEA repository.

Since the Kotlin plugin and Kotlin have separate release cycles, this creates some limitations that are important to emphasize:

Learn more about the EAP for Kotlin and IntelliJ IDEA.

Kotlin code completion works based on a machine learning mechanism by default. Code suggestions are prioritized more carefully as IntelliJ IDEA considers the choices of thousands of real users in similar situations. You can configure ML-assisted completion in Preferences/Settings | Editor | Code Completion.

You can customize the inlay hints’ appearance in Preferences | Editor | Inlay hints | Kotlin.

Package Search now works with build.gradle.kts files. This feature allows you to upgrade, downgrade, and remove existing dependencies. You can use it to find new dependencies and add them automatically. Package Search will add the required repositories to your build script if they’re missing.

There is a new node Advanced Settings in the Preferences | Settings window. It contains some use-case-specific options conveniently grouped by the IDE tool.
For example, you can add a left margin in Distraction-free mode, or set the maximum number of recent projects which are displayed in the File | Open Recent menu.