As a part of ReSharper Ultimate 2016.2, our C++ team is happy to present the ReSharper C++ 2016.2 update. All in all, the new release comes with 200+ fixes and resolves several important performance- and stability-affecting issues. Let’s take a tour of the new features in this release.

The mainline ReSharper’s refactorings continue to make their way into ReSharper C++. With the latest update, Inline Variable is now available for C++. This refactoring allows you to replace all occurrences of a variable in the code with its initializer. (The reverse functionality is already provided by the Introduce Variable refactoring.)

Doxygen is arguably the most popular format and tool for code documentation in the C++ world. ReSharper C++ now understands Doxygen syntax, and provides several key features to facilitate editing of documentation blocks:

You can now generate documentation for C++ declarators, classes and macro definitions. Since parsing a C++ file can require a significant amount of time, to avoid UI freezes this feature is implemented via a context action available when using Alt+Enter on the entity’s name.

When the action is applied, ReSharper C++ uses the builtin doc live template to generate the resulting comment. The default documentation template is configured to be compatible with Doxygen syntax, but it can be customized (as usual) using the Templates Explorer tool window. An assortment of specialized documentation macros can be used inside the template, which evaluate to:

Thanks to Doxygen support, Quick Documentation now works in C++. The documentation pop-up (bound to Ctrl+Shift+F1 in the Visual Studio scheme or Ctrl+Q in the IntelliJ IDEA scheme) will display documentation from Doxygen comment blocks, or the symbol’s signature if no documentation is found. 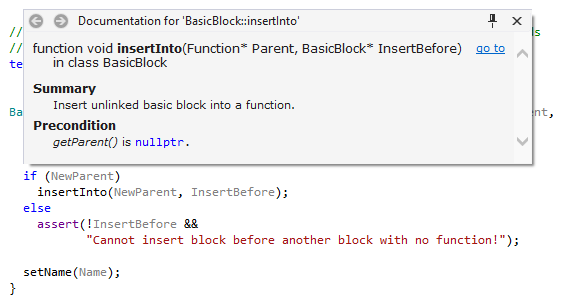 Most header files should start with some form of include guard to avoid multiple inclusion. Similar to the Missing precompiled header include for .cpp files, ReSharper C++ will now warn you if a header file lacks an include guard and will provide a fix to automatically add a #pragma once directive.

Omitting noexcept specifications from user-defined move constructors and assignment operators can have serious performance implications (for an in-depth discussion refer to this blog-post or Item 14 of Scott Meyers’ excellent “Effective Modern C++”). To make sure this is intentional, ReSharper C++ will warn you about move constructors, move assignment operators and swap functions without an explicit noexcept specification, with corresponding fixes to add one.

Starting with Visual Studio 2013, the Visual C++ compiler has supported explicit user defined conversions. To complement the existing Non-explicit converting constructor inspection, Non-explicit conversion operator was added. Severity for both analyses is set to Hint by default (so they are not shown as suggestions), but can be increased if you prefer to avoid implicit user-defined type conversions. 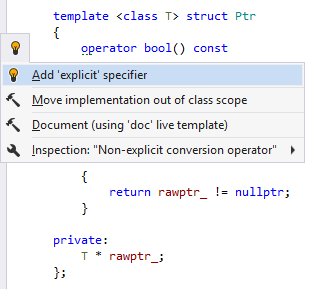 In addition to suggesting to replace zero constants with nullptr in pointer contexts, ReSharper C++ will also offer replacing integral constants with true/false in boolean contexts.

Last but not least, another new inspection detects missing default cases in switch statements and provides a fix to insert it. The same fix is also available for the Uncovered enumerators inspection.

A new member of the Go to family, Go to Text navigation (Ctrl+T,T,T in the Visual Studio keyboard scheme or Ctrl+N,N,N in the IntelliJ IDEA scheme), lets you quickly find and navigate to any text in source and textual files in the entire solution.

This new feature uses trigram indexing to make text search blazing-fast. Similar to other navigation commands, if there are too many matching items you can press + on the numeric keypad to explore results in the Find Results window.

Different projects use different conventions for the syntax of #include directives – as a result, we received several requests to make auto-generated #include directives more customizable. ReSharper C++ now provides preferences about whether to insert paths relative to the current file and when angle brackets should be used instead of quotes. 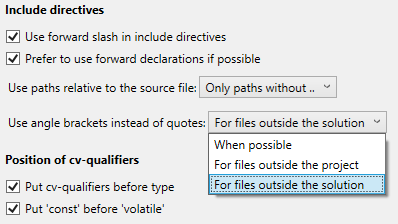 A couple of settings were added specifically for compatibility with pre-C++11 codebases:

In addition to Google Mock, the mock function generator now supports Trompeloeil. Trompeloeil is a modern header-only C++14 mocking framework, and is a great alternative to Google Mock when your project needs a mocking library but does not use Google Test. As with Google Mock, the generator becomes available when ReSharper C++ detects that the library is included into the current source file.

Code completion in C++ became integrated with auto-import and can suggest symbols that are not included into the current file. The necessary #include directives are added automatically when an auto-import item gets used.

Please note that auto-import items get added into the completion list asynchronously, so they will be available after a short delay.

If you need to surround a piece of code with a template, just select the code and type in the name of the template you need: no extra shortcuts required. Furthermore, a single template can now be used for creating code (as a live template) and for surrounding existing code (as a surround template).

The default C++ class and struct file templates now contain a macro that expands into an #include directive for the precompiled header file, if the project uses one.

Keeping up with the language evolution, ReSharper C++ extends its support of the C++14 standard. In particular, variable templates and decltype(auto) are now supported.

When your caret is on one of the exit points of a function/loop/switch (return, throw etc.), ReSharper C++ will automatically highlight all other exit points.

Similar to Visual Studio’s __INTELLISENSE__ define, ReSharper C++ now defines its own __RESHARPER__ macro in the internal preprocessor implementation. If necessary, this definition can be used to guard code that ReSharper C++ does not understand for some reason, or to hide parts of a file from code analysis.

If you are attending CppCon 2016, be sure to stop by the JetBrains booth September 20-21! Members from both the CLion and ReSharper C++ teams will be present, and we will be happy to tell you all about our products, share future plans and answer your questions. Don’t miss your chance to participate in our license raffle and win a free 1-year subscription for any JetBrains C++ product of your choice!

As always, we would like to hear your feedback – and if you have any problems or feature suggestions, do not hesitate to contact us or create a request in our issue tracker!