ReSharper C++ 2017.3 has been one of our biggest updates yet in terms of both new features and fixed issues.

Without further ado, let’s dig into the notable changes it brings:

Clang-Tidy is a powerful open-source code analysis tool based on the popular Clang compiler. It comes with an extensive set of code checks and accompanying fixes for typical programming errors.

ReSharper C++ 2017.3 provides seamless integration with Clang-Tidy. This means that as you edit a file, ReSharper C++ runs Clang-Tidy on it in background as a separate process, with inspection results shown right in the editor alongside other ReSharper C++’s inspections. Unsaved files are handled transparently by saving the text of the current document to a temporary file and instructing Clang-Tidy to use it instead of the on-disk version.

To distinguish between Clang-Tidy checks and ReSharper C++’s inspections, look at the name of the check in square brackets, appended to the inspection message. 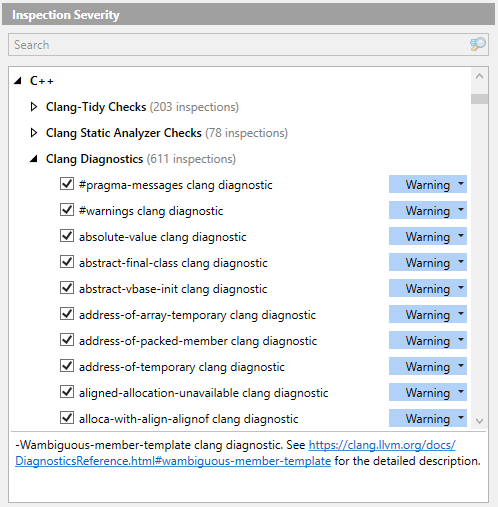 Some of the Clang-Tidy checks that duplicate ReSharper C++’s built-in inspections are turned off by default. In addition, all static analyzer checks are disabled, since enabling them significantly slows down Clang-Tidy.

As with the built-in inspections, you can use the inspection context menu to quickly change the severity of a Clang-Tidy check, or to disable it via a comment. There is also an additional action that opens the online documentation page for a particular check.

ReSharper C++ lets you apply the fixes provided by Clang-Tidy similarly to its own built-in quick-fixes. As with other bulk fixes, Clang-Tidy fixes can be applied individually or inside a specific scope (file, folder, project, or solution).

By default, ReSharper C++ will reformat code changed by Clang-Tidy to maintain the code style. This behavior can be disabled via the Reformat changed code after applying Clang-Tidy fix-its setting to speed up fix execution. 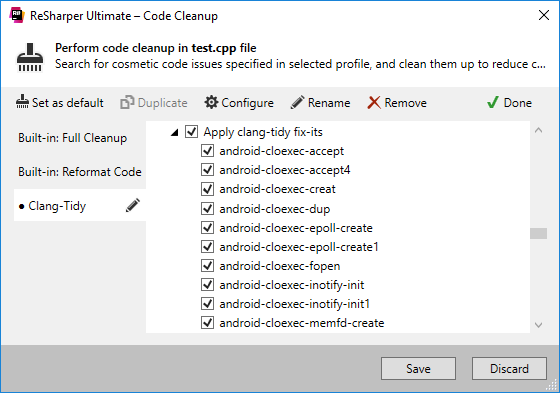 The selected checks will be enabled even if they are turned off on the Inspection Severity options page. Please be careful when enabling too many checks at once — code cleanup runs Clang-Tidy only once for a given file, so if multiple fixes touch the same block of code, the changes might conflict with each other.

ReSharper C++ does not write its own Clang-Tidy config, so a user-provided one can be picked. Clang-Tidy attempts to read configuration for each source file from a .clang-tidy file located in the closest parent directory of the source file. The source file here (as with the rest of ReSharper C++ inspections) is the .cpp file itself if the analysis is run on it, or a random .cpp file which includes the header when the analysis is performed on a header file. Alternatively, you can use the Clang-Tidy config ReSharper setting to pass a string with custom configuration to Clang-Tidy via the -config command-line option.

We needed to make a few modifications to Clang-Tidy to facilitate its usage from the IDE, so unfortunately a custom Clang-Tidy binary cannot be used at the moment. ReSharper C++ 2017.3 is shipped with a version of Clang-Tidy built from the trunk, and we plan to update it to the final Clang 6.0 version in ReSharper C++ 2018.1.

There are a few caveats to Clang-Tidy integration that we are aware of:

There are several ways to disable or enable Clang-Tidy integration:

ReSharper C++ 2017.3 is the first release that brings debugger-related features to the table. The most useful of them is inline watches: ReSharper C++ will display local variables, function parameters, current line expressions, and function return values right inside the editor. This feature provides immediate feedback during debugging sessions, which means that often you don’t even have to consult the Watches or Autos tool windows. 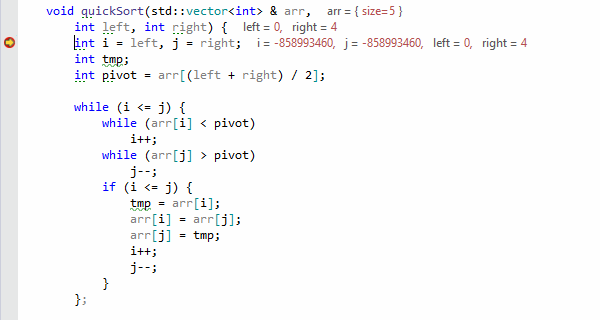 ReSharper C++ is careful to evaluate only those expressions that do not have side effects. At the moment, expression evaluation is limited to references, constants, member access, and built-in subscript operators. Subscript operators of std::vector and std::array are also evaluated as an exception. Please note that inline watches use the Visual Studio debugger engine to evaluate expression, which means that Natvis files with user-provided visualization rules are automatically supported.

ReSharper C++ also comes with its own debugger DataTips, which provide several advantages over their Visual Studio counterparts: 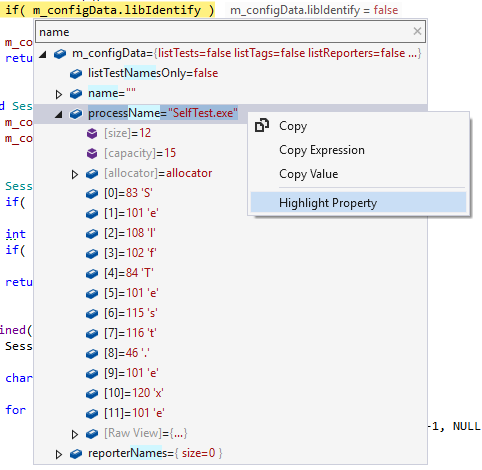 Working with multiple breakpoints should now become easier. The new Go to Breakpoint action (Ctrl+Alt+F9) displays breakpoints in a context menu so that you can quickly navigate between them. In addition, the dedicated R# Breakpoints tool window (ReSharper | Windows | Breakpoints) groups breakpoints and displays the line of code where each breakpoint was set. 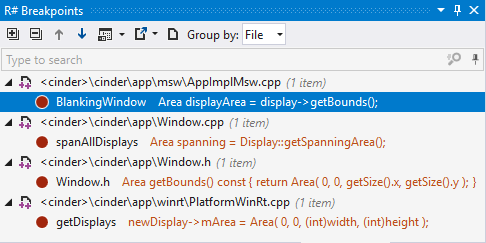 Breakpoints and tracepoints can also be created directly in the Find Results tool window, from the occurrence context menu.

But that’s not all — we are working on adding new debugger-related features. In particular, ReSharper C++ 2018.1 will bring debug step filters, a feature which lets you make the debugger step over certain functions (e.g. subscript operators or trivial getters). If you are interested in trying it, head over to the Early Access Program page when the EAP starts and install the latest available ReSharper 2018.1 build.

For the 2017.3 release, we specially focused on improving the product’s understanding of C++. We made sure the following new C++17 and C++14 features received support:

All in all, this brings ReSharper C++ almost to the level of standard C++ support provided by the Visual C++ compiler at the moment, with two notable features still in our queue to implement — fold expressions and evaluation of constexpr functions.

Other language-related changes include:

A couple of context actions were also added:

If you wish to preserve custom formatting just inside a block of code, ReSharper C++’s formatter can now be selectively disabled by wrapping this block with a pair of comments containing formatter directives: // @formatter:off to disable formatting, and // @formatter:on to enable it back.

Instead of disabling the formatter completely, you can configure it using inline EditorConfig-style settings and override only one or several of them, keeping common code style settings active. Please refer to the EditorConfig Properties help page for the list of supported properties.

Another long-requested formatter feature is the ability to align specific code elements in columns, which is now supported for assignment statements, declaration names, and single-line comments (configured by a family of settings in Indentation and Alignment | Align Similar Code In Columns). 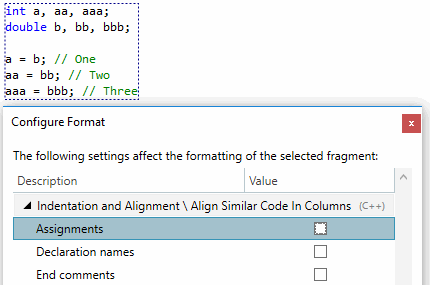 The Go to Declaration command is now available on dependent names inside definitions of templates. This should make it much more useful in template-heavy code. Since ReSharper C++ has no way of finding the exact entity that the name refers to, instead it will look through all the symbols and offer those with matching names and signatures as potential navigation targets. 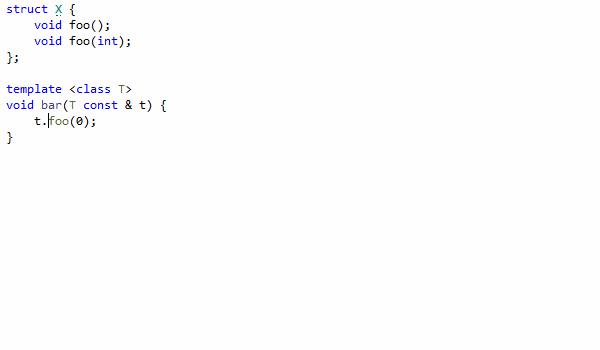 In addition, Go to Declaration now lets you navigate from a member function definition to a declaration with a non-matching signature if no matching declaration is found. This ability comes in handy when you change the definition and need to update the declaration (even though we encourage you to use the Change Signature refactoring and related fixes for this purpose).

To-do patterns get a URL field, which creates a link in your code for navigating to external resources by Ctrl+Click on the to-do item, or via the Alt+Enter shortcut. This helps you keep your to-do comments brief and straightforward: no full URLs are needed, only an issue ID. Links in to-do items support the Peek Preview feature to display the linked issue inline in the editor. Also, you can easily locate the to-do item in To-do Explorer via the Alt+Enter menu. 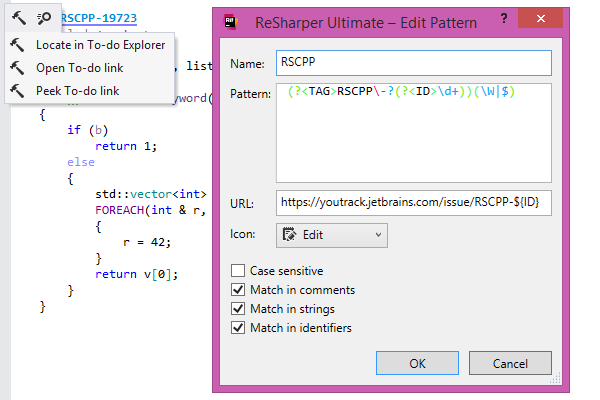 We hope you find the new features useful! Please leave us any feedback and report issues either in the issue tracker or on the support forum.