This guest post is brought to you by Paul Stovell, creator of Octopus Deploy.

TeamCity is a powerful continuous integration and build automation tool. Scroll through the list of built-in build runners and build features in TeamCity, and you’ll find almost any activity that you could want to perform during a build. It can restore NuGet packages, compile solutions, run unit tests, patch AssemblyInfo files, inspect code quality, and capture code coverage metrics, just to name a few. You can also combine multiple builds together to form a chain of builds, which is a powerful way to orchestrate an entire continuous delivery solution.

TeamCity can also be used to deploy your application during the build. This is useful if you want to deploy it to a test environment for users to test, or even automate deployments straight to production. You can even chain builds in TeamCity to make promoting between Test and Production environments possible. You can do this by telling TeamCity to call your script or command-line deployment tool during the build: 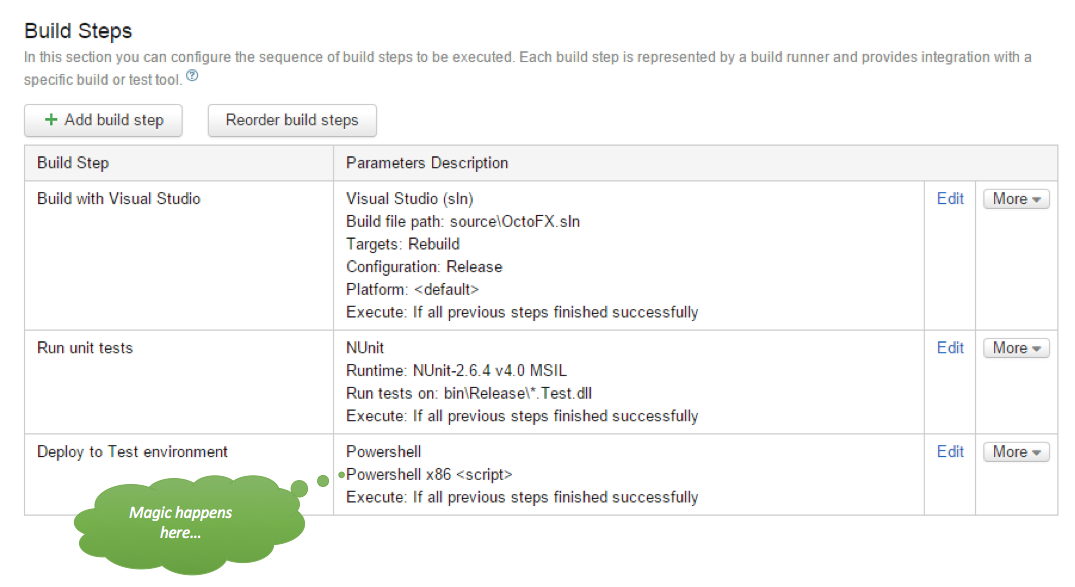 Unfortunately, while TeamCity provides some high-level build activities like compiling with MSBuild or running NUnit tests, it doesn’t provide any high level deployment related tasks (“Configure IIS”, “Install a Windows Service”, “Update this configuration file”, etc.). “Run a script” is where TeamCity begins and ends; it’s up to you to write that script. Most teams solve these problems themselves, by writing their own deployment automation scripts, by combining tools like WebDeploy and PowerShell Remoting. Along the deployment automation journey, teams often encounter similar problems:

Four years ago, these were the kinds of problems we faced when it came to writing our own deployment scripts for client projects. We wanted something that elegantly solved the problems above, and which could work in the most secure environments, and yet would be as easy to use as the high-level build runner tasks in TeamCity. That’s why we built Octopus Deploy. Where TeamCity is a build automation server, Octopus is a deployment automation server. Like TeamCity, Octopus is free for small teams. When you use TeamCity and Octopus together, the goal is to let TeamCity do what it does best – build – and let Octopus take care of deployments. 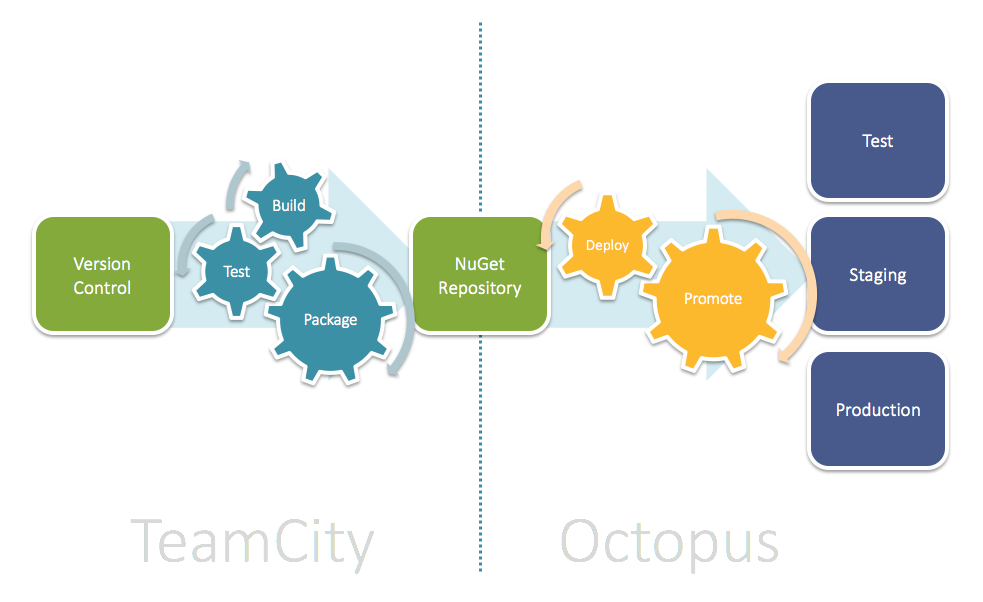 TeamCity is responsible for:

While Octopus is responsible for:

If you have a build pipeline in TeamCity, extending it to deployment can do wonders in giving your team a tighter feedback loop. Writing your own custom scripts and invoking them from TeamCity isn’t the only option; the next time you find yourself automating deployments from TeamCity, have a look at Octopus Deploy.

7 Responses to Automating Deployments with TeamCity and Octopus Deploy

This guest blog post is brought to you by Alex Zhitnitsky, Director of Product Marketing at OverOps. It’s no secret that 100% test code coverage ≠ 100% of critical issues identified. Developers, build engineers, and managers are throwing everything they have at this problem – rigorous code reviews, static analysis, and every possible type of automated test they can think of, but the facts of the matter stay the same – code still breaks. The reason for this is that testing requires foresight. You can’t predict the future with absolute certainty, and the level of foresight that’s required
October 11, 2019 by Yegor Naumov

TeamCity offers a number of ways to help you work with tests. First of all, it presents the test results for each build execution so it’s easy to analyze what happened and why something has failed. Besides that, TeamCity includes advanced features like code coverage, flaky test detection, metadata in tests, and the ability to re-order the test execution. In this blog post, we provide a brief overview of these features. Test results It all starts with presenting the results. On the build configuration home page, for each build, we can see the number of tests that were executed. We can also se
August 21, 2019 by Anton Arhipov
Subscribe