In Datalore we’ve manually assembled a dataset with the technical specifications of 495 Nvidia and AMD Radeon GPU machines. Let’s learn more about how this type of hardware has improved over time. 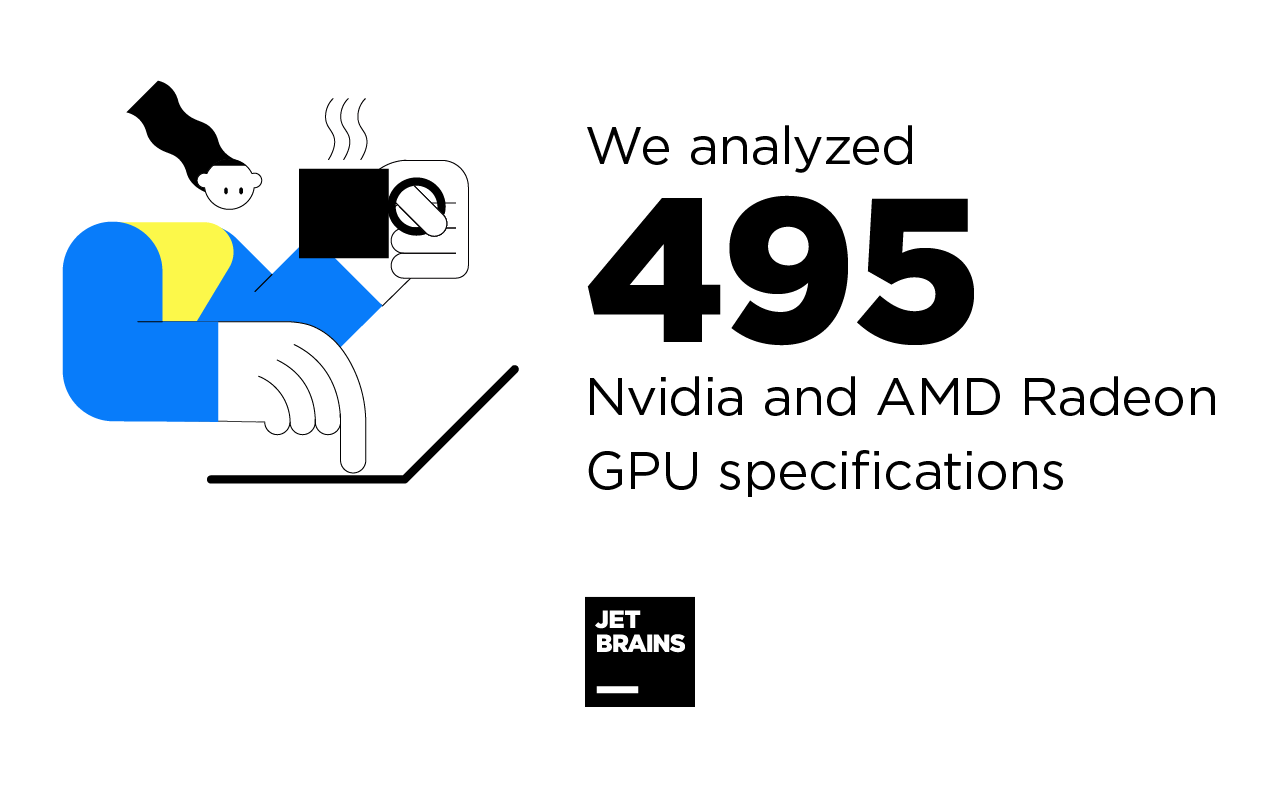 How to open the notebook in Datalore?

Click the "Edit" button in the upper right corner in this notebook.

Moore’s law says that the number of transistors in an integrated circuit doubles every 2 years. Let’s see whether it applies to GPUs as well!

However, Moore’s law is almost true for transistor density. If you look at the plot below you’ll see that it doubles roughly every 3 years. 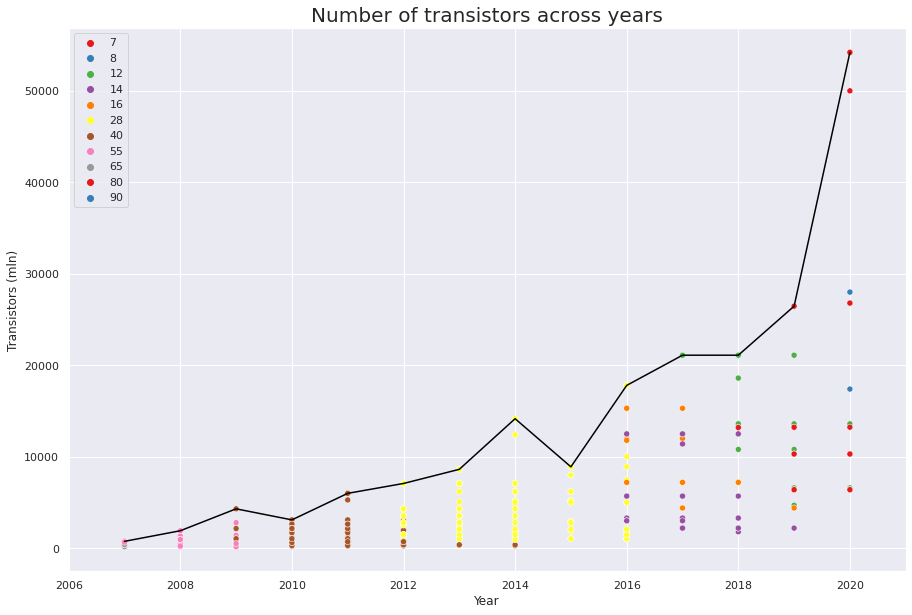 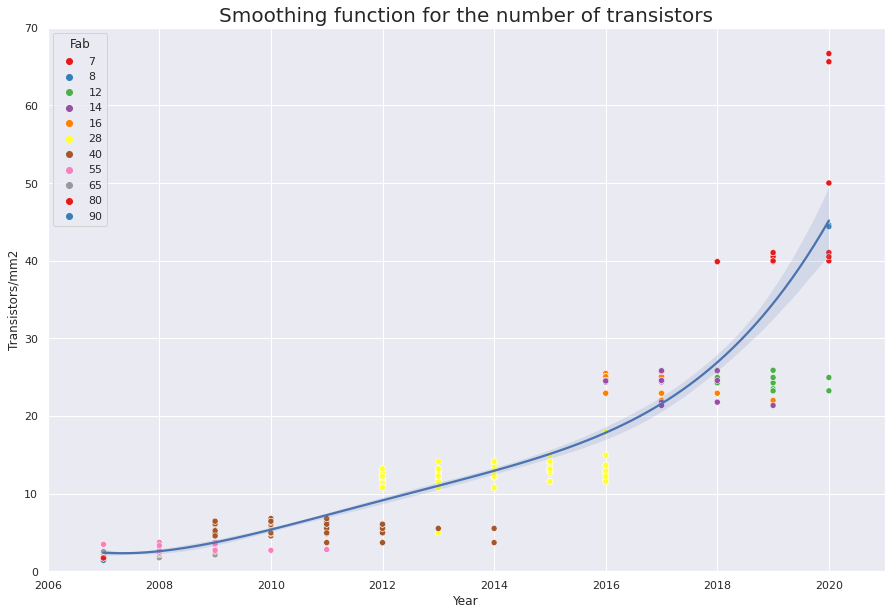 Another interesting topic is GPU power consumption and heating.

Let’s display the distribution of TDP (thermal design power) for the 3 GPU groups. We’ll plot the exact distribution in bins and add a smoothed line approximation.

While server GPUs are hotter and more powerful on average than consumer and workstation ones, it’s interesting that there are a lot of low-power workstation GPUs. These are intended not for 3D graphics or parallel computing, but for managing display panels and video walls.

In the next plot we see how the GPU model distribution changes depending on the fabrication process and the TDP across two manufacturers. 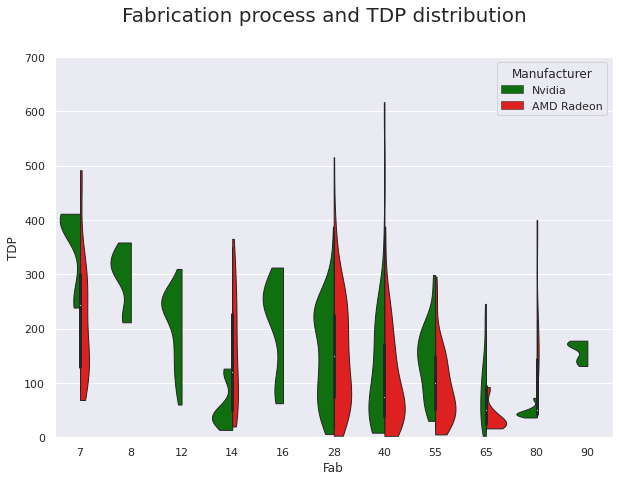 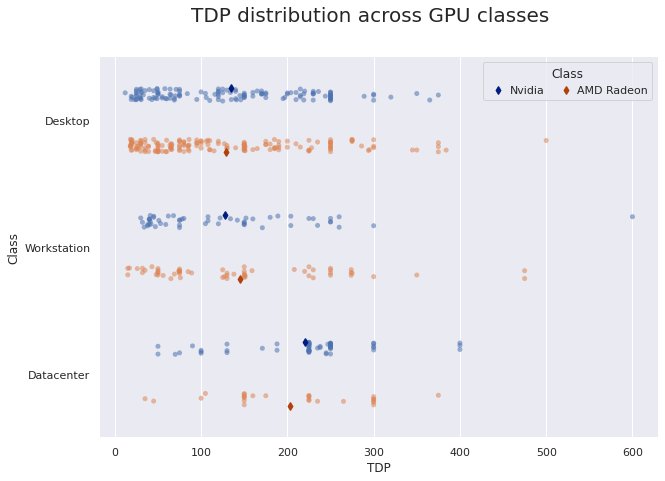 From the plots below we can see a linear correlation between TDP and the physical amount of silicon, including die size.

GFLOPS is the number of billions of Floating Operations Per Second. It determines the computational power of a GPU. Let’s see how this number has increased over the years. 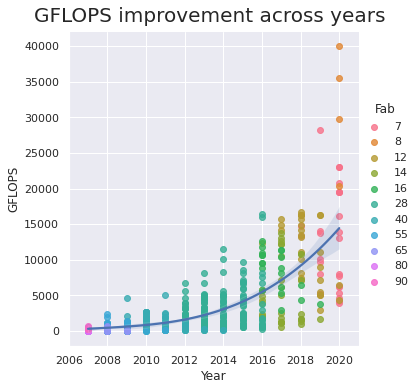 We’ll also compute an additional feature – the number of GFLOPS per million transistors:

On the plot below we can see the dependencies between the year, transistors/mm2, GFLOPS/transistors, and TDP parameters. 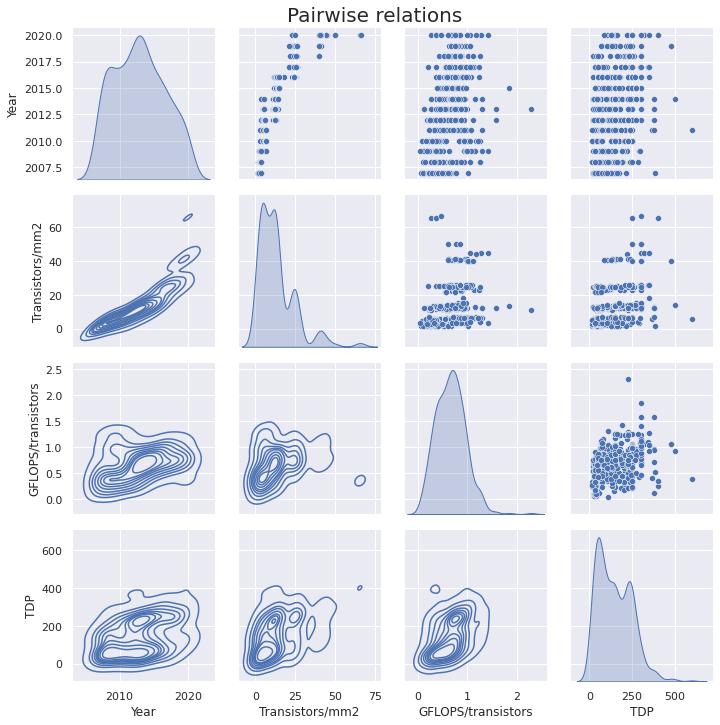 From the plot below we can see that the Nvidia A100 and Radeon MI100 have roughly the same FP32 GFLOPS as the other top-tier GPUs of 2020 and 2019, despite having ~2x many transistors. Still they are significantly slower than the desktop-segment RTX 3090, which has nearly twice as many GFLOPS.

However, A100 and MI100 have significantly faster FP32 sparse and FP16 modes. For example, while the RTX3090 yields only 35.6 TFLOPS of FP16, the MI100 can provide up to 184.6, and the A100 can reach 624 when working with structurally sparse matrices. It seems like this is caused by the new Multi-Instance GPU technology, which allows the A100 to be partitioned into seven GPU instances.

A final interesting observation is that there is almost no growth of GFLOPS per number of transistors. 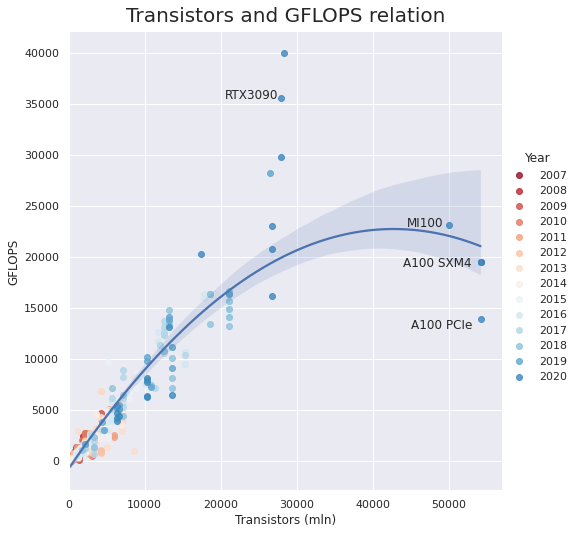 💡 A final interesting observation is that there is
almost no growth of GFLOPS per number of transistors. 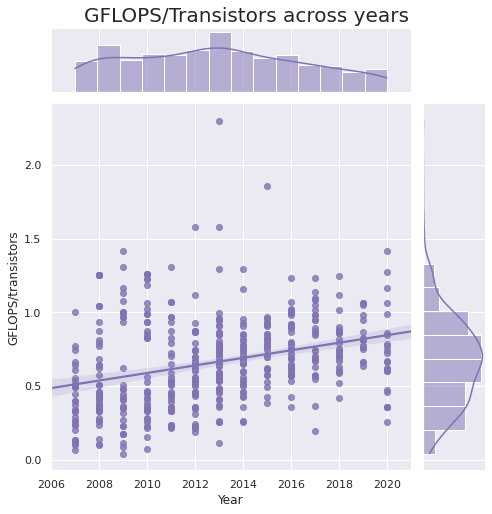 Check out the summary plots in Datalore!

Feel free to play with our GPU dataset, which is available here. Please mention the Datalore team as the source of the Dataset. We would love to see your work and share it with our community.

Learn about data preparation for machine learning and analysis, and avoid some of the most common problems real-world data can throw at you.

We are thrilled to introduce a major update to the Reporting workflows and make Datalore more affordable for small teams. Read on to learn what’s new in the 2022.3!