Performance testing is growing more and more popular as one of the most effective methods for preventing application performance regression.

When tracking the execution time of critical features, a typical CI workflow looks as follows:

Although such an approach looks easy to implement, it has some drawbacks. First, depending on the CI system you use, step 3 may be quite tricky. You need to add some custom failure condition for the duration of the specific test, and your CI server may not support this out of the box. Second and more important, when such a build fails because of your test, you don’t have a clue as to why this happened.

To find the exact methods that have become slower due to regression, you need either to thoroughly examine your code or (and this is much more effective) profile the problematic test in a performance profiler. So why not do this right on the CI server? Why not run the test under a profiler, and if there’s a slowdown, fail the build and get a performance snapshot?

We tried to solve this problem using two of our products: dotTrace performance profiler and TeamCity CI server. The brainchild of our efforts is the dotTrace Profiler plugin for TeamCity. With this plugin, the performance testing workflow becomes even simpler:

Now, if at least one method exceeds its threshold, the plugin will fail the build and save the collected performance snapshot to build artifacts.

Here’s how the workflow looks in one picture: 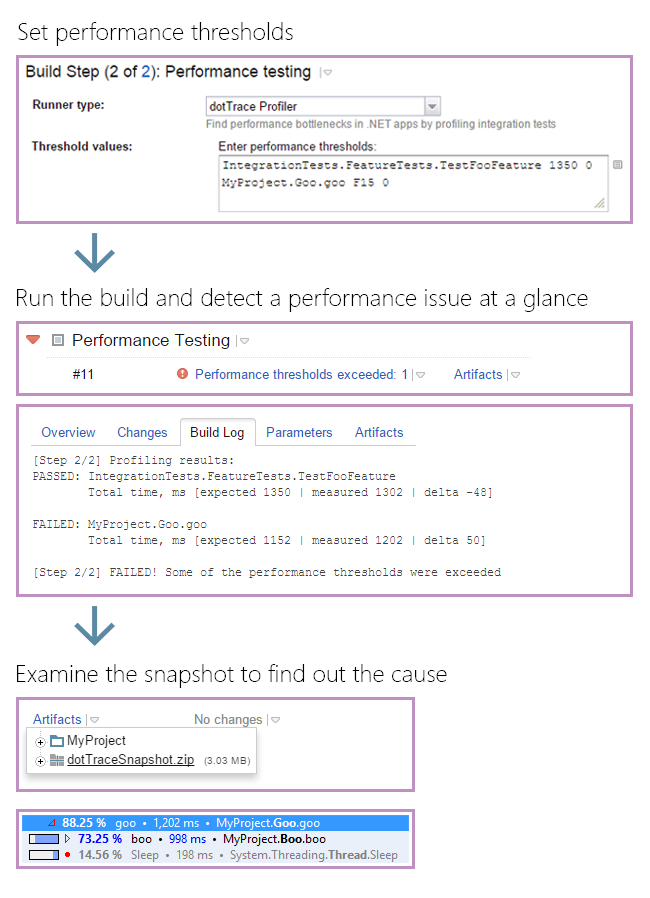 For this plugin to run, only the free dotTrace console profiling tool is required. You will only need the full version of dotTrace if you want to analyze the collected performance snapshot.

Now let’s take a closer look at how to use the plugin.

IMPORTANT! Unit test runner must also be installed on the same agent. In our example, we will use NUnit.

Let’s suppose we have an application with a killer feature called Foo. For example, we have a Foo class with the Foo() method which, in turn, uses a Goo class. It creates a Goo instance and runs its Goo() method, which also runs some methods. We assume the execution time of the Foo feature is crucial for user experience. So we add a performance NUnit test that runs the feature:

IMPORTANT! To help ensure consistency of profiling results, you should assign the build configuration that uses the plugin to a specific build agent (hardware agent is strongly recommended). For further instructions please refer to TeamCity documentation.

The next step is to create the build configuration dedicated for performance testing in TeamCity. For example, we already have My Project. Let’s add to that project a configuration consisting of two steps: building the application and running performance tests. To save time, let’s proceed right to configuring the second build step.

In our example, we want to track the total execution time of the Foo feature, so we add a threshold for the total time of the TestFooFeature() test. F15 means that the value for comparison (with up to 15% tolerance) must be taken from the first successful build. E.g., if during the first successful build run dotTrace measures 1000 ms total time for the method, the method’s threshold for all following builds will equal 1150 ms (1000 + 1000*0.15).

In our example, we also want to check the total time of the Goo() method as it strongly impacts the performance of the Foo feature. Checking the method’s execution time during the build simplifies our job: in case of performance issues with Foo, we will know right away if Goo() is the one to blame. As a threshold for the method, we also use the value from the first successful build, plus 15% tolerance.

Now it’s time to run the build! As we decided to use values from the first successful build for the thresholds, the first build won’t fail in any case – it is used only to set the baselines for the TestFooFeature() and Goo() methods. The time values from this build will become the “golden standard” for all subsequent builds.

Suppose now that someone has edited the Goo() method and made it slower. (We’ll emulate this using Thread.Sleep(200).) Now, the build fails with the Performance thresholds exceeded: 2 message:

The Build Log provides some info on what happened:

As we instructed the plugin to save a performance snapshot in case of any issues, it has stored the archive with the snapshot in the artifacts folder:

Now, we can analyze the snapshot and find the exact cause of the performance flaw:

Note that all values are reported as TeamCity statistic values, so you can build trend graphs for the measured time values if you like. To do this, open the Parameters tab of any build and switch to Reported statistic values: 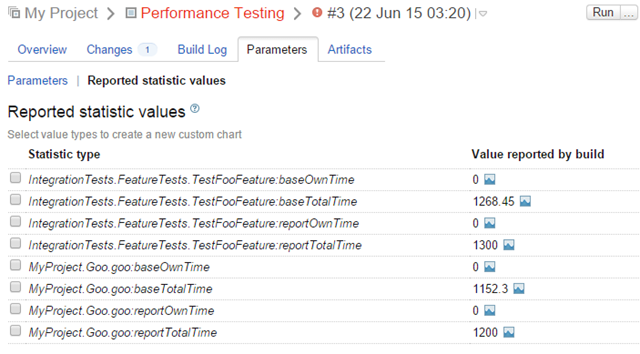 Click View trend for a particular parameter to see its diagram of changes:

If you use continuous integration in your development environment and it involves performance testing, don’t hesitate to try the dotTrace plugin. We’re just getting started with it! In future releases we plan to integrate the plugin right into TeamCity’s unit test runner types.