A while ago, we introduced the dotTrace plugin to TeamCity. It helps you prevent application performance regression by profiling integration tests on a TeamCity server.

Now we’re releasing the next version of this plugin that brings some significant improvements. Before we move on to the details, let’s recall how the plugin is used for tracking performance in CI builds:

This simplified workflow description is missing one obvious yet very important step: plugin configuration. The initial plugin required a number of preparatory steps on the build agent side: installing the console unit test runner and creating a rather complex XML configuration file (containing various profiling options, like profiling target, type, and so on). The new release addresses this issue: you no longer need to install the runner or create the configuration file. The trick is that the plugin is now made a part of unit testing build steps. Thus, after installing the plugin, all these build steps (Visual Studio Tests, NUnit, MSpec, and others) get the additional option Run build step under dotTrace profiler.

Below, we’ll provide the detailed plugin usage example that you can use as a step-by-step guidance for the new dotTrace Plugin for TeamCity.

IMPORTANT! If you use the previous plugin version, uninstall it before proceeding to this step.

Suppose we have an application with a killer feature called Foo. For example, we have a Foo class with the Foo() method which, in turn, uses a Goo class. It creates a Goo instance and runs its Goo() method, which also runs some methods. We assume the execution time of the Foo feature is crucial for user experience. So we add a performance NUnit* test that runs the feature:

* The plugin supports all TeamCity .NET unit test runners, but we will use NUnit in our example.

The next step is to create a build configuration dedicated to performance testing in TeamCity.

IMPORTANT! To help ensure consistency of profiling results, you should assign the build configuration that uses the plugin to a specific build agent (a hardware agent is strongly recommended). For further instructions please refer to TeamCity documentation.

Suppose we already have a project called My Project. Let’s add to that project a configuration consisting of two steps: building the application and running performance tests. To save time, let’s proceed right to configuring the second build step. 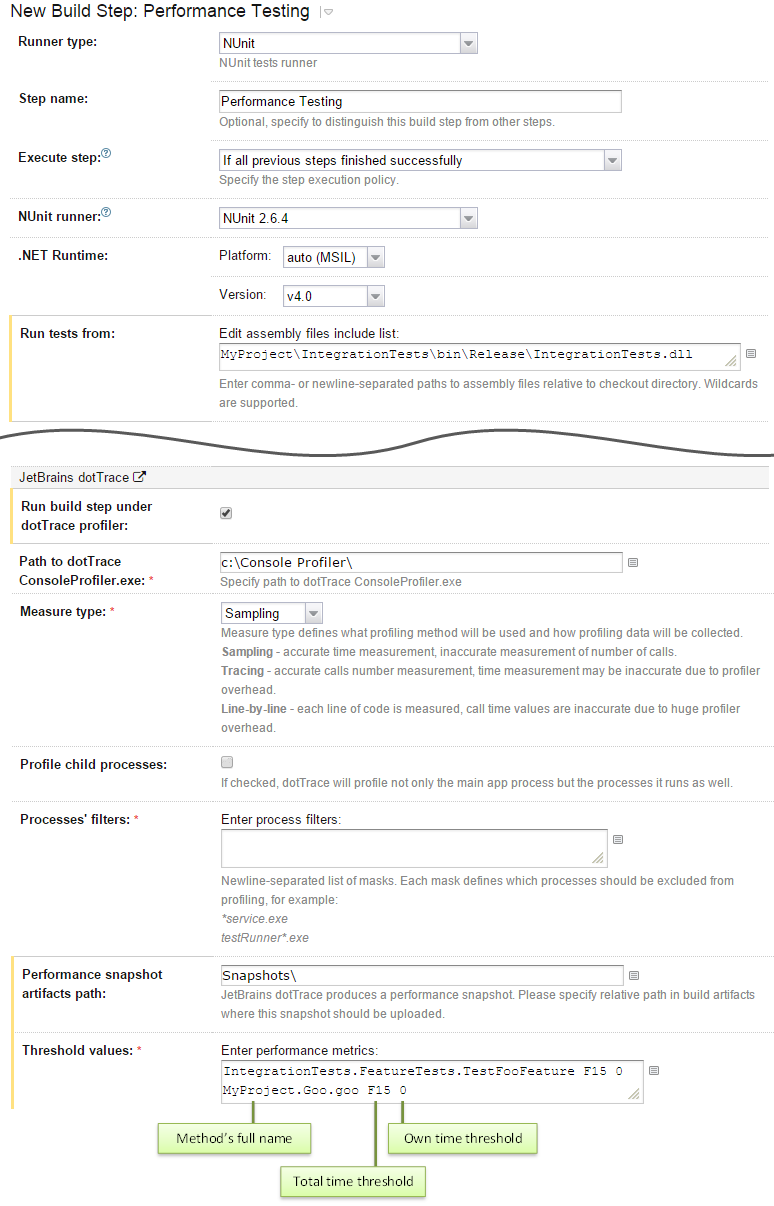 In our example, we want to track the total execution time of the Foo feature, so we add a threshold for the total time of the TestFooFeature() test. F15 means that the value for comparison (with up to 15% tolerance) must be taken from the first successful build. E.g., if during the first successful build dotTrace measures 1000 ms total time for the method, the method’s threshold for all following builds will equal 1150 ms (1000 + 1000*0.15).

In our example, we also want to check the total time of the Goo() method as it strongly impacts the performance of the Foo feature. Checking the method’s execution time during the build simplifies our job: in case of performance issues with Foo, we will know right away if Goo() is the one to blame. As a threshold for the method, we also use the value from the first successful build, plus 15% tolerance.

If we want the build step to fail when a test exceeds its performance threshold, we should set a failure condition.

Now it’s time to run the build! As we decided to use values from the first successful build for the thresholds, the first build won’t fail in any case — it is used only to set the baselines for the TestFooFeature() and Goo() methods. The time values from this build will become the “golden standard” for all subsequent builds.

As this post has illustrated, the updated dotTrace plugin for TeamCity no longer requires complex configuration, which makes it easier to use. To check it out on your own, please download the plugin (remember to use guest / guest credentials to download). As always, we’d be happy to hear any feedback from you. Feel free to ask any questions in the comments to this post.