We are getting closer to the release date and working hard towards providing the finest coding experience to Visual Studio 2017 RTM users. If you are already using the latest release of Visual Studio, make sure to download ReSharper Ultimate 2017.1 EAP 5 to get the best support for its new features.

We have introduced quite a lot of improvements during this EAP, and today we’ll take a look at updates in our two latest EAP builds.

A month ago we published a post covering unit testing of a .NET Core apps with ReSharper and gave a detailed explanation of why it worked only in project.json based projects. Now we finally have added support for .csproj based projects. ReSharper discovers and runs MSTest and xUnit tests and supports code coverage and profiling as well as targeting multiple frameworks. There’s also DataRow support for MSTest v2.
Note, that NUnit Engine does not currently support .NET Core projects and the dotnet-test-nunit adapter doesn’t work with the new .csproj format.

All in all, ReSharper’s support for C# 7 has noticeably improved in the recent EAP. We’ve added a lot of inspections to comply with the compiler, introduced new quick-fixes, and updated existing ones with new language features.

ReSharper now displays errors in tuples more accurately. For instance, it can detect typos in variable names when overriding a method or implementing an interface.

C# 7 removed certain limitations to throwing exceptions, so that developers can now use throw as part of the expression. ReSharper offers a quick-fix to Join null check with assignment, which makes the code more readable by combining the assignment, the null-coalescing operator, and throw. This quick-fix can be applied to a null check in a single statement, as well as to all relevant statements within the class or constructor, whole file, whole project or whole solution.

We’ve also updated the existing context action Convert to ‘?:’ operator and the .throw postfix template to support C# 7 throw expressions. If you apply the context action to this example code:


you can quickly convert it to this:

The .throw postfix template generates a throw statement in the expression if it’s applicable:

ReSharper’s code completion now works for component tags and attributes, as well as for [attr., [style., and [class..

Component attributes have received support for one of the most frequently used navigation commands, Go to Declaration, which can be invoked by pressing F12 on an attribute.

C# formatting styles were enhanced with a few new options. You can now set spaces before and inside the parentheses of ‘nameof’, and choose your preferred wrapping style for chained binary expressions.

On the C++ side of things, we’ve implemented initial support for the Open Folder mode and CMake projects. In particular, you can now run unit tests in such projects. Settings for the test run can be configured on a new C++ Tests page in ReSharper options. 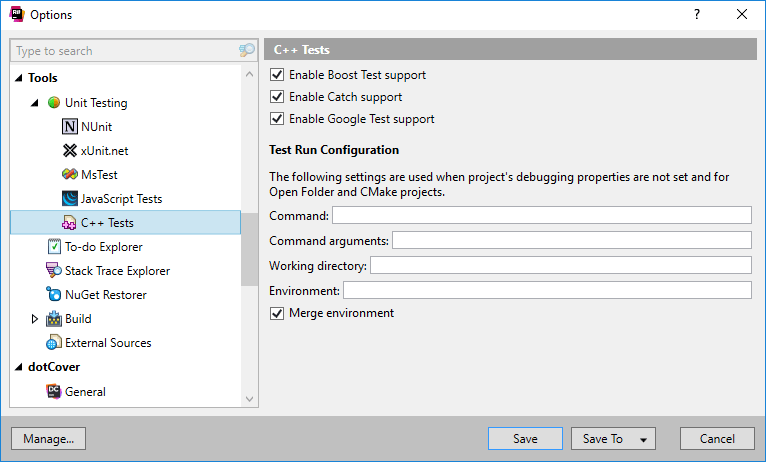 Download the newest EAP build from our Early Access page, or if you have the previous builds installed get the patch by clicking Check for Updates in the ReSharper menu.

If you encounter any issues, please let us know here in the comments or via Twitter mentioning @ReSharper. And stay tuned – the 2017.1 release is coming soon!