Today, a certain cross-platform .NET IDE hits its greatest milestone so far: Rider 2017.1 RTM is now available for download and purchase. If you’re an All Products Pack subscriber, the license covers Rider: just start using it right away. 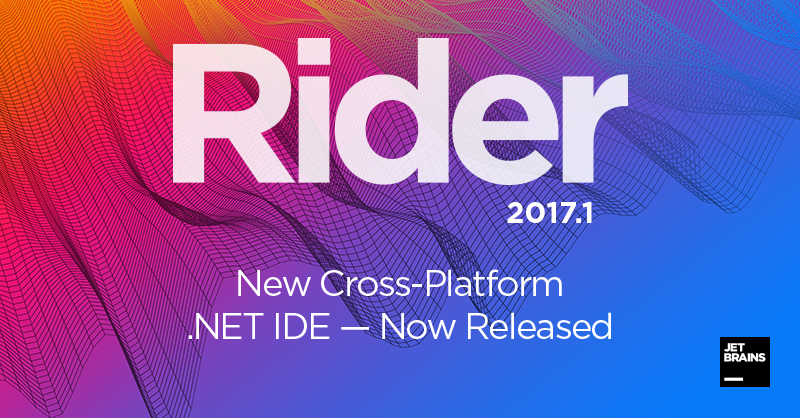 What is JetBrains Rider

If you haven’t been following closely, here’s a quick summary of Rider.

Rider is a cross-platform .NET IDE: you can use it on Windows, Mac and Linux. Rider lets you develop ASP.NET, .NET Core, .NET Framework, Xamarin and Unity applications.

Rider is a combination of several JetBrains technologies: it puts ReSharper‘s powerful .NET support in the shell of IntelliJ IDEA, and includes WebStorm (front-end development) and DataGrip (SQL and database management) functionality out of the box. If you have experience using ReSharper in Visual Studio, or any of JetBrains IDEs, we hope you will feel right at home with Rider.

As we blogged earlier, Rider uses the standard JetBrains licensing model: there are subscriptions available for corporate and individual customers, with monthly and yearly payment options. Using your subscription continuously helps you save up to 40% off standard price on your third year and onwards.

To learn more about pricing, get a quote or apply for a complimentary license, see the Rider Buy page.

We want to roll out at least two more releases this year: an inevitable bugfix release in a few weeks, and another major release (2017.2) in the Fall. Things that we expect to be addressing include support for MSTest and .NET Core 2.0, as well as releasing an SDK. We’ll certainly be keeping a close eye on your feedback (submitted via the support form, issue tracker or elsewhere) to see what other major issues need to be addressed.

Meanwhile, please download Rider for Windows, macOS or Linux, and take it for a 30-day trial.