It’s been four weeks and 7 EAP builds since we blogged about the ReSharper Ultimate 2017.2 EAP (Early Access Program) — time to have a thorough look at what’s new since!

With C# 7.1 around the corner, several new language features will come available. In our first ReSharper 2017.2 EAP, we already added support for the default literal. This newest EAP comes with support for a change in pattern matching with generic types, full support for async main, and supports tuple projection initializers.

Traditionally, when we would want to project a collection and then run LINQ over it, we’d have to resort to using either a helper class or an anonymous type for doing that projection. Not only that: if we just wanted the values for name and age, we’d have to allocate those explicitly as well:


It looks verbose, and in fact there are several things happening under the covers that make this less than optimal. The compiler will generate an anonymous type which we are allocating on the managed heap (for every element in our list). We then have to allocate our name and age as well.

Granted, we could make this a bit more efficient by rewriting the example a little bit, or use C# 7.1’s tuple projection initializers. No anonymous type, less allocatons on the managed heap, and pleasant to read:

Note if you want to use this, the ValueTuple type is required. It’s built into .NET 4.7, .NET Core 2.0, Mono 5.0 and .NET Standard 2.0. If you’re on another target framework, the System.ValueTuple package will have to be installed.

When using ReSharper’s Go to Everything (Ctrl+T) or one of the other navigation features, we can find types, type members, files, text, … It’s a powerful search engine, much like the ones we use to find things on the Internet! ReSharper’s search supports partial search terms, CamelHumps, misspellings, … In this EAP build, we made finding things in our projects even more powerful!

ReSharper now returns results when word order is incorrect. What was that method called again? Was it ValidUser() or UserValid()? No worries, Go to … will find it:

Sometimes we do know the correct name of what we are looking for. However when that name is something more generic like Service, ReSharper may return a lot of search results…

It’s also possible to use wildcard * or ? inside quotes for a more exact wildcard match. For example "*Service" will show UserService, IssueService, WorkItemService – as long as it ends in Service.

We’ve always had a code inspection that encourages using implicit types using the var keyword (or, depending on your code style, the other way around, using explicit types). This EAP now also applies this inspection and its corresponding quick-fix to out variables:

A couple of other inspections were added as well:

There are many ways of checking for null values and there are many preferences with our users for what style of null checks should be used when generating code. We have added a new options page, Null checking, where the priority of null checking patterns used by quick-fixes, context actions and code generation actions can be configured: 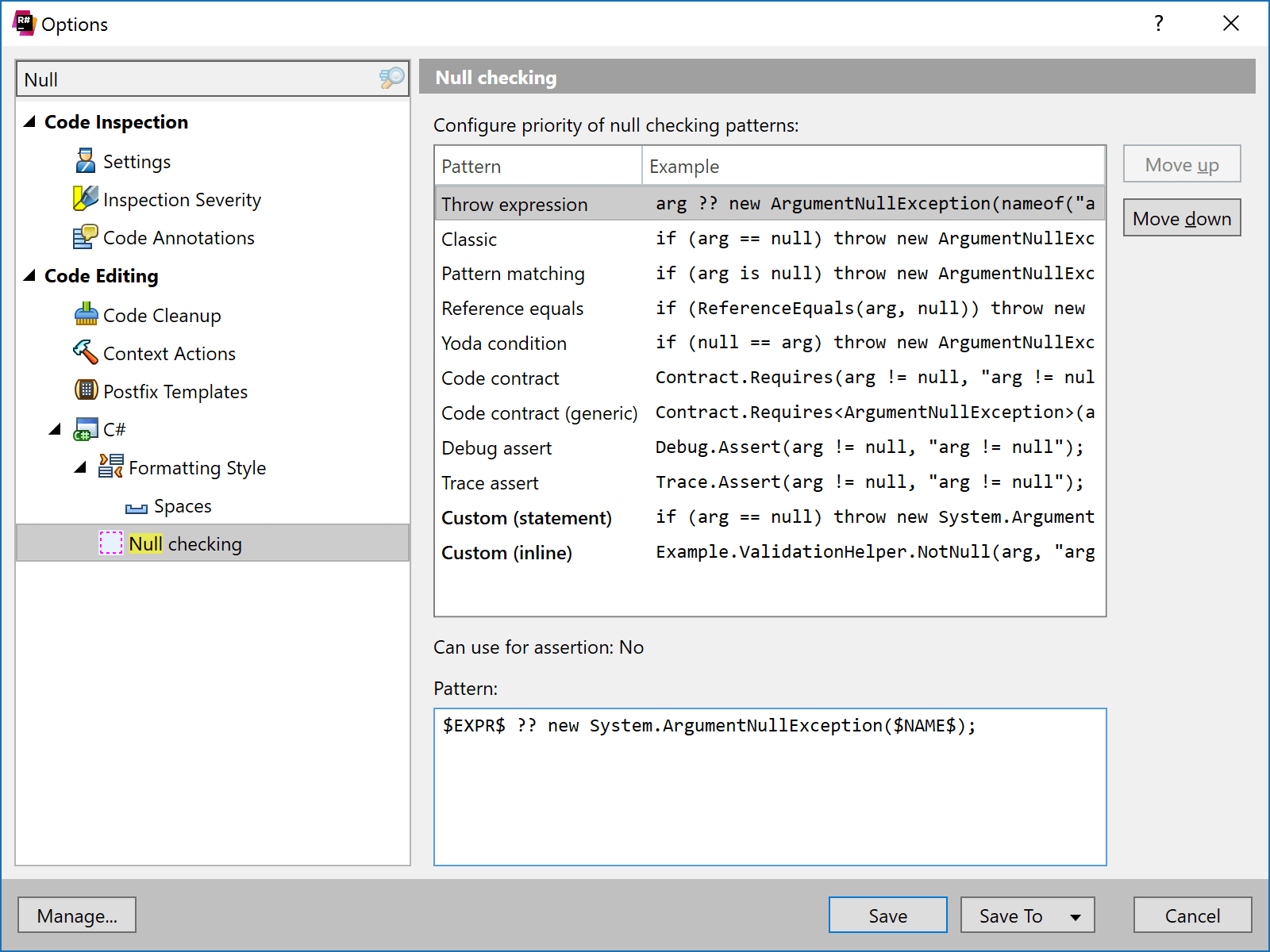 A lot of work in the latest ReSharper Ultimate 2017.2 EAP build was done on the TypeScript side:

We made several JSON improvements as well, for example when working in package.json. ReSharper knows about the file type and when we invoke Quick Documentation (Ctrl+Shift+F1) on a package name, we can see additional package details as well as links to the home page, tarball and issue tracker: 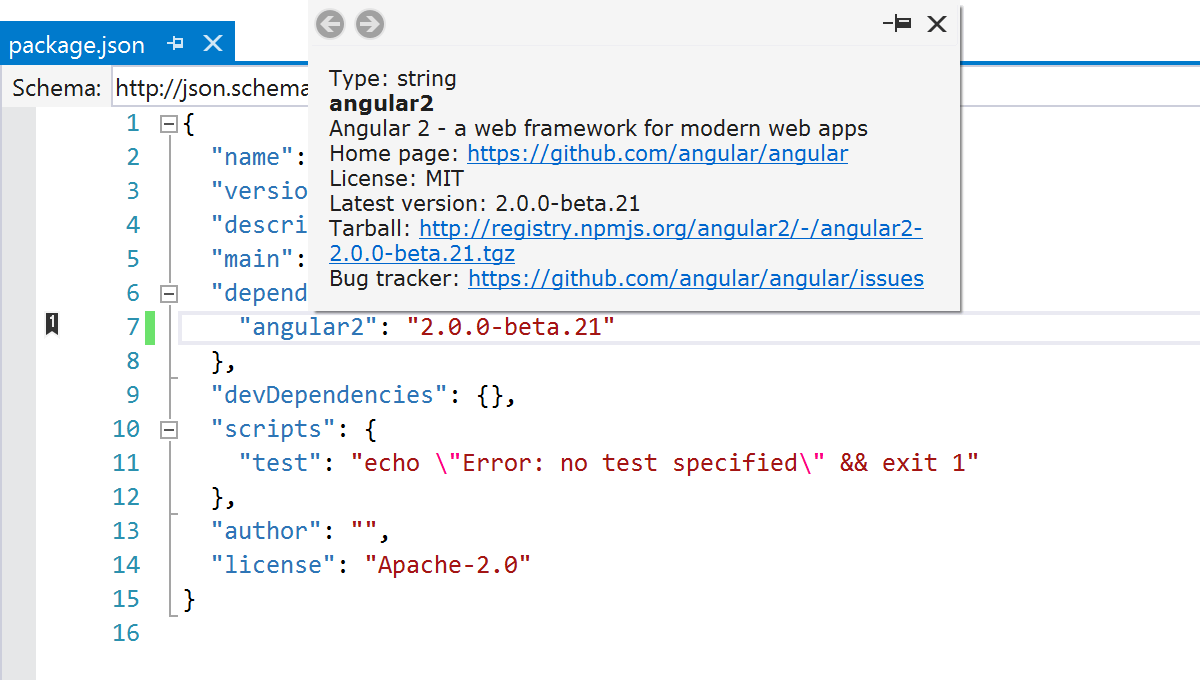 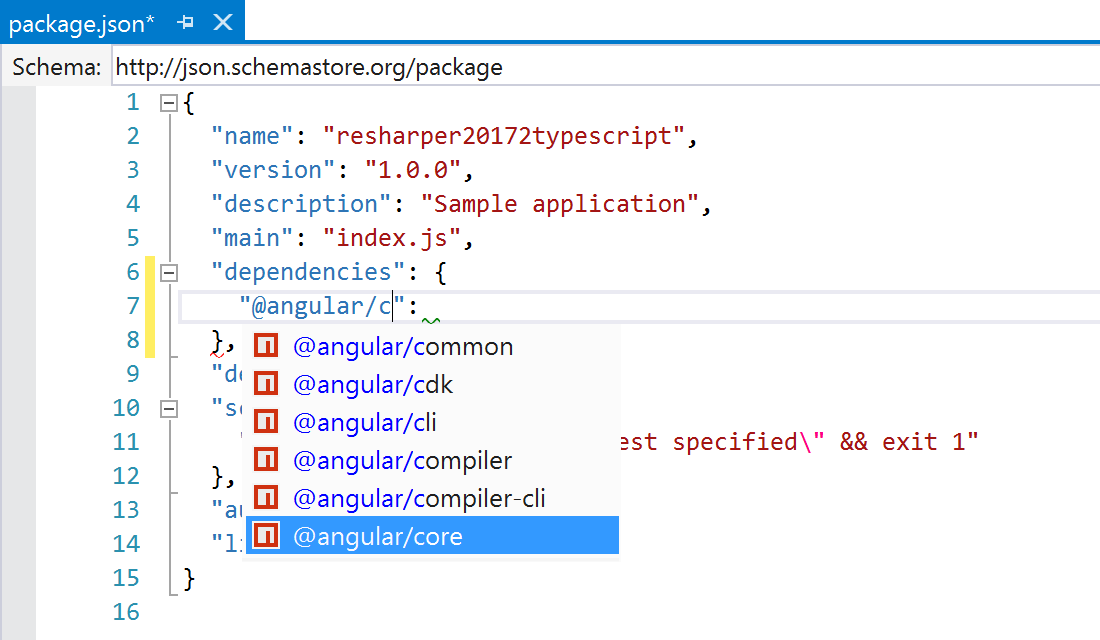 When generating a constructor using the Generate action (Alt+Insert), parameters for that constructor can be made optional: 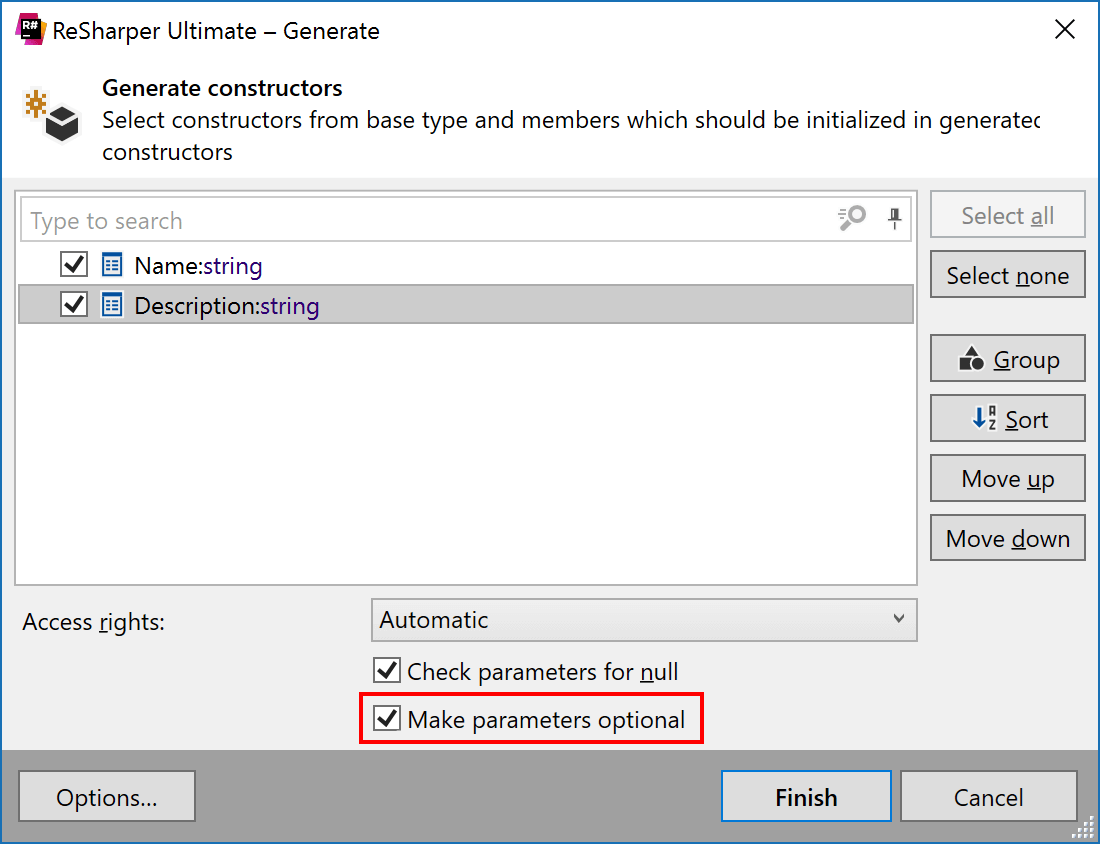 SourceLink is a new way of embedding infomation about an assembly’s original source code into the PortablePDB format. Both our standalone decompiler as well as ReSharper now support SourceLink: when an assembly is compiled with the Roslyn compiler flag /sourcelink:<file> (and a source_link.json is generated using, for example, Cameron Taggart’s SourceLink tools), dotPeek will now download sources referenced in the PortablePDB or use the embedded source files when available.

Speaking of PortablePDB – we added some more features to the Metadata tree: 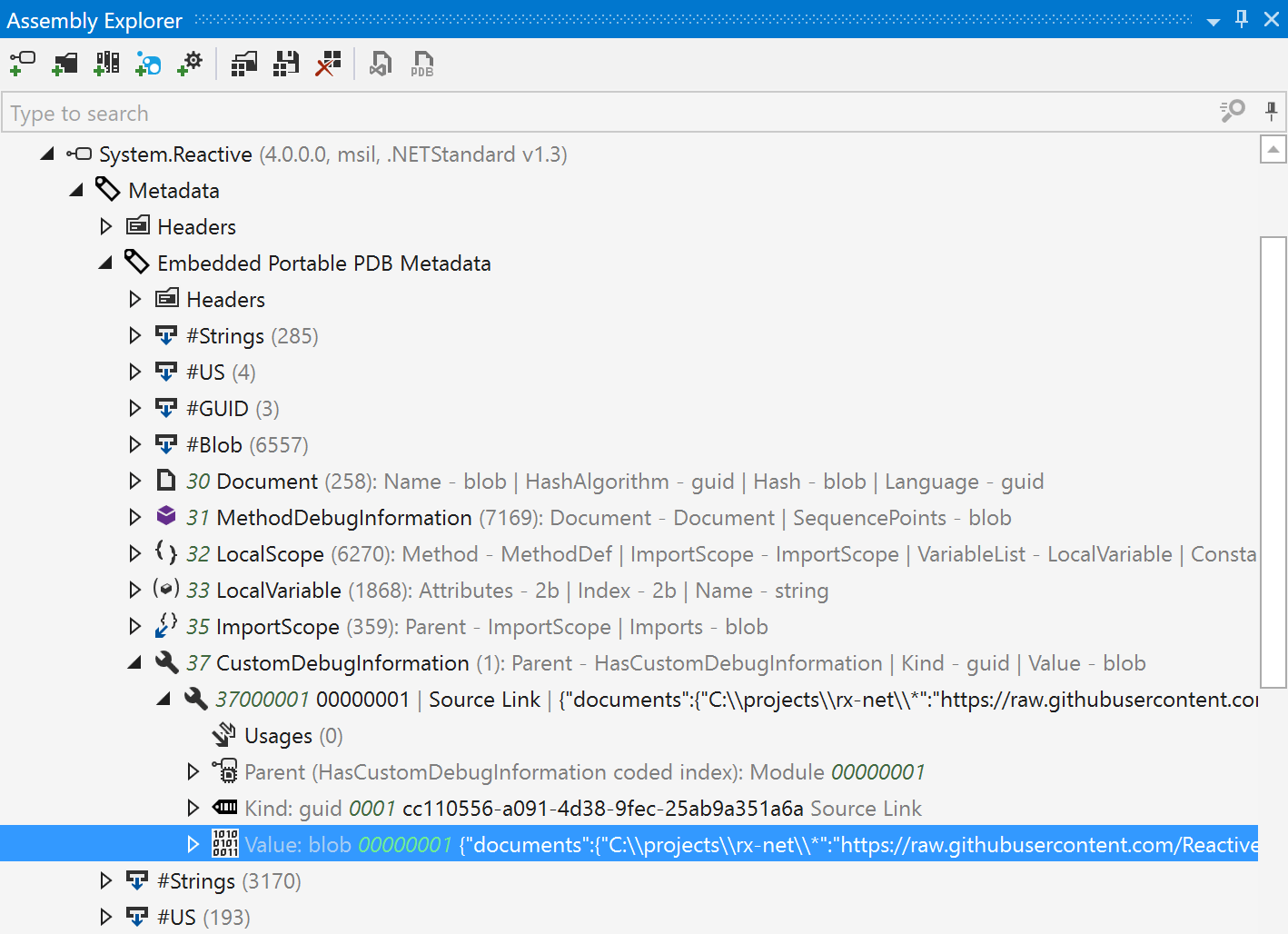 The Go to String (Ctrl+Alt+T) navigation is now integrated into Go to Everything (Ctrl+T). Additionally:

We have been working hard improving the profiler engine powering both dotTrace and dotMemory. First of all, we added support for profiling .NET Standard 2.0 applications, on our own machine or remote.

The profiler core engine now supports setting a directory where temporary files, diagnostics and snapshots are stored. This is especially handy when profiling remote applications: if the profiler has no write access on the system drive, dotTrace and dotMemory can still profile the application.

A number of changes and new features went into ReSharper C++, including performance improvements – for example on switching build configurations.

Let’s have a look at what else is new.

An analyzer was added to check when a local variable can be defined as a constant. ReSharper C++ will inform us about that and display a suggestion in the editor.

From the ReSharper settings under Code Editing | C++ | Naming Style, we could already edit the naming styles for generating new entities. We now added an inspection that hints when existing code does not conform to these naming styles. The inspection can be enabled or disabled as well: 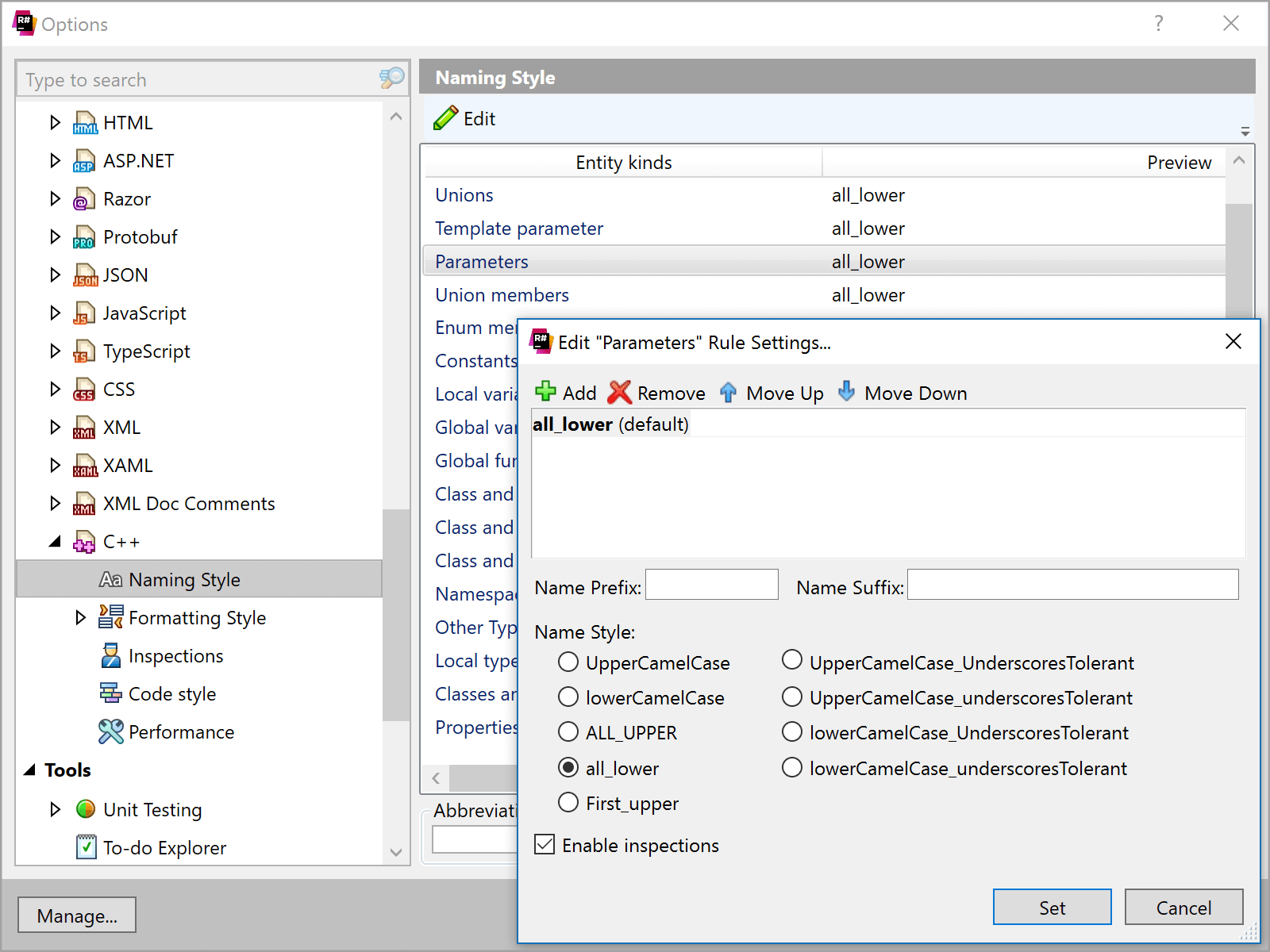 An inspection for unused return values shows us when we forgot to return the value. Using a quick-fix, ReSharper C++ can solve things for us:

Other inspections and quick-fixes that were added:

Here’s an overview of enhancement to the editor formatter:

The ReSharper C++ team continuously works on adding additional support for the C and C++ languages. For example:

That about wraps it up. We’re looking forward to any feedback you may have on the latest builds of ReSharper, ReSharper C++, dotCover, dotTrace, dotMemory, dotPeek, as well as various command-line packages included in this EAP.

Download the latest ReSharper Ultimate 2017.2 EAP and give it a try!