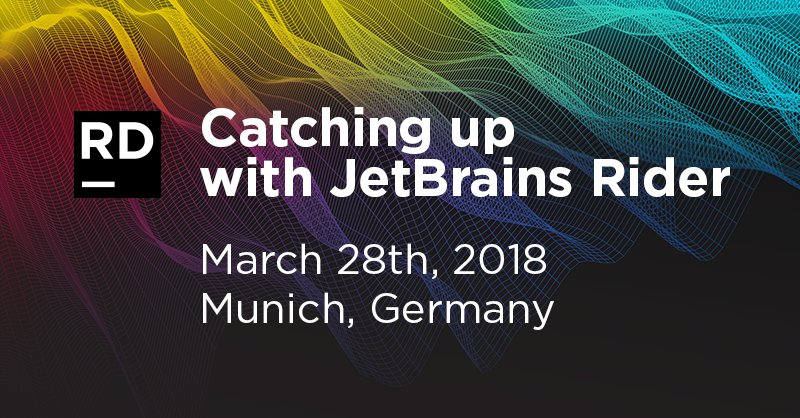 At the event, you’ll learn about all the new functionality introduced in the latest Rider updates, such as project templates, the debugger improvements like smart-step into, and how you can start debugging third-party code without any effort. We’ll also take a look at the features brought in by ReSharper and IntelliJ IDEA, such as the reworked code formatting engine, extracting code into local functions, C# 7.1 and C# 7.2 support, a new editor-based REST client, and much more.

Interested in writing high-performance .NET applications? In his talk, Kirill Skrygan, Rider Team Lead, will walk you through some common .NET Performance practices with real-world examples which affect the IDEs you use every day. We will peek under the hood of Visual Studio, ReSharper, and Roslyn, and discover the basic architecture of these gigantic .NET products. Finally, you will understand why Visual Studio is so slow on big solutions (and why it always will be); what is beautiful about Roslyn, why ReSharper might slow down Visual Studio even more, and why Rider is technically the next generation of IDE.

Matthias Koch is a passionate C# developer and likes to talk about clean code, testing and tooling in general. Much of his spare time in the last 5 years was devoted to his very own open-source projects. He is working at JetBrains as a Developer Advocate.

Previously a principal ReSharper engineer, leading the Rider project since 2015. Kirill Skrygan loves to challenge and resolve performance issues. Obviously, he is an avid IDE believer. Apart from his JetBrains duties, he has developed a custom ORM engine, MVC engine and designer, NDjango and Boo parser and an ontology-based knowledge framework.

All the talks will be presented in English, and light snacks will be served. This is a FREE event, but seating is LIMITED. Please make sure to reserve your spot today!