The latest Rider 2018.3 EAP build extends Rider’s language injections functionality quite a bit, with SQL language support in string literals. This gives us highlighting, code completion and code analysis, and a Run in console action for SQL inside of a C# string!

More than enough for a long blog post! Grab a coffee or tea, sit back, and let’s dive in!

What are language injections again?

Sometimes we have to embed a piece of code in a string literal. For example, pieces of HTML inside a JavaScript string, or a quick JSON fragment inside a C# string. Rider supports marking a string literal as containing another programming language, so that we get highlighting, code completion, code analysis and more inside of a string!

That’s the main premise. In case you want to read more about language injections in Rider before, go read up on them. Now let’s look at what’s new in Rider 2018.3!

For those developers using Entity Framework’s SqlQuery to work with raw SQL queries, or those using a data access framework like Dapper which is string-based, we have great news!

After setting up a database connection in Rider, we can mark any string as being a SQL fragment, and get highlighting, code completion and code analysis based on the schema of the database we are connected to! 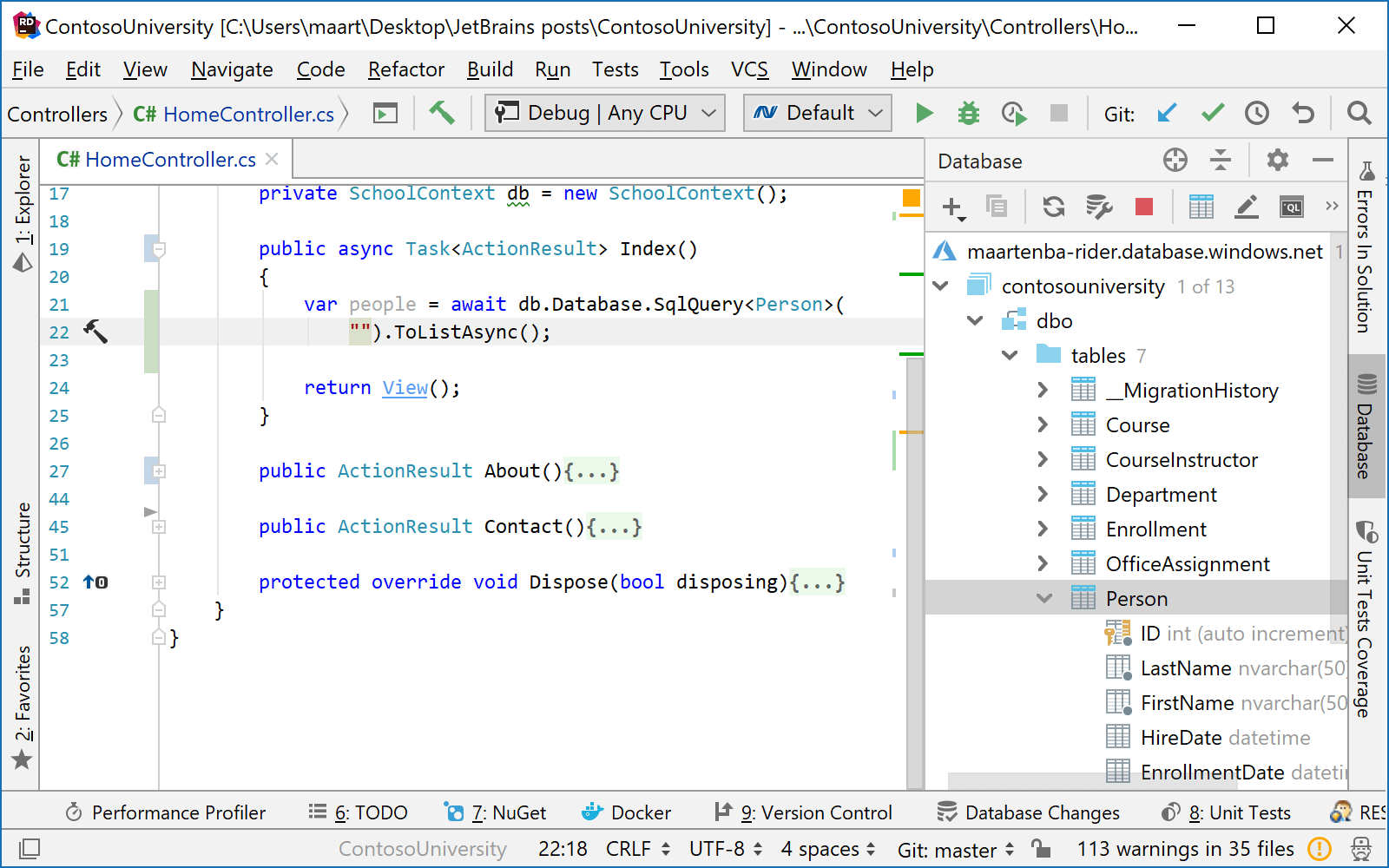 That’s right: code completion based on our connected SQL database, inside a C# string literal!

Note that this also works with Data Definition Language (DDL) database connections: if you have a folder containing .sql files that define tables, views, …, Rider will provide code completion for those as well. 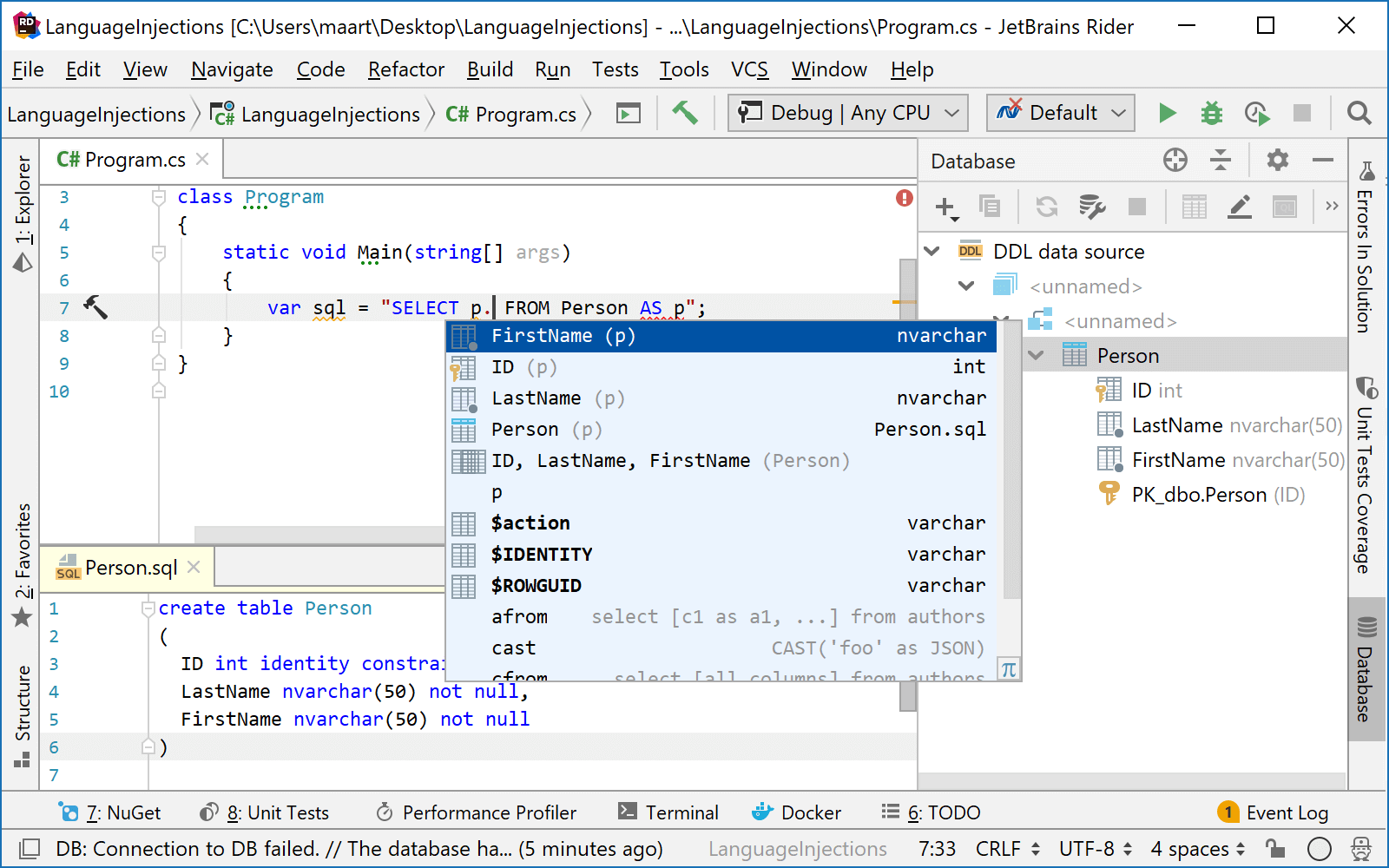 Having support for injected SQL fragments should help us in writing raw SQL queries in our code, which is especially useful when using the various micro-ORM’s (such as Dapper) out there.

For strings that contain injected SQL, Rider provides highlighting, code completion and code analysis. Not only that: database-related context actions (Alt+Enter) become available as well, such as running a query from C# string in the database console: 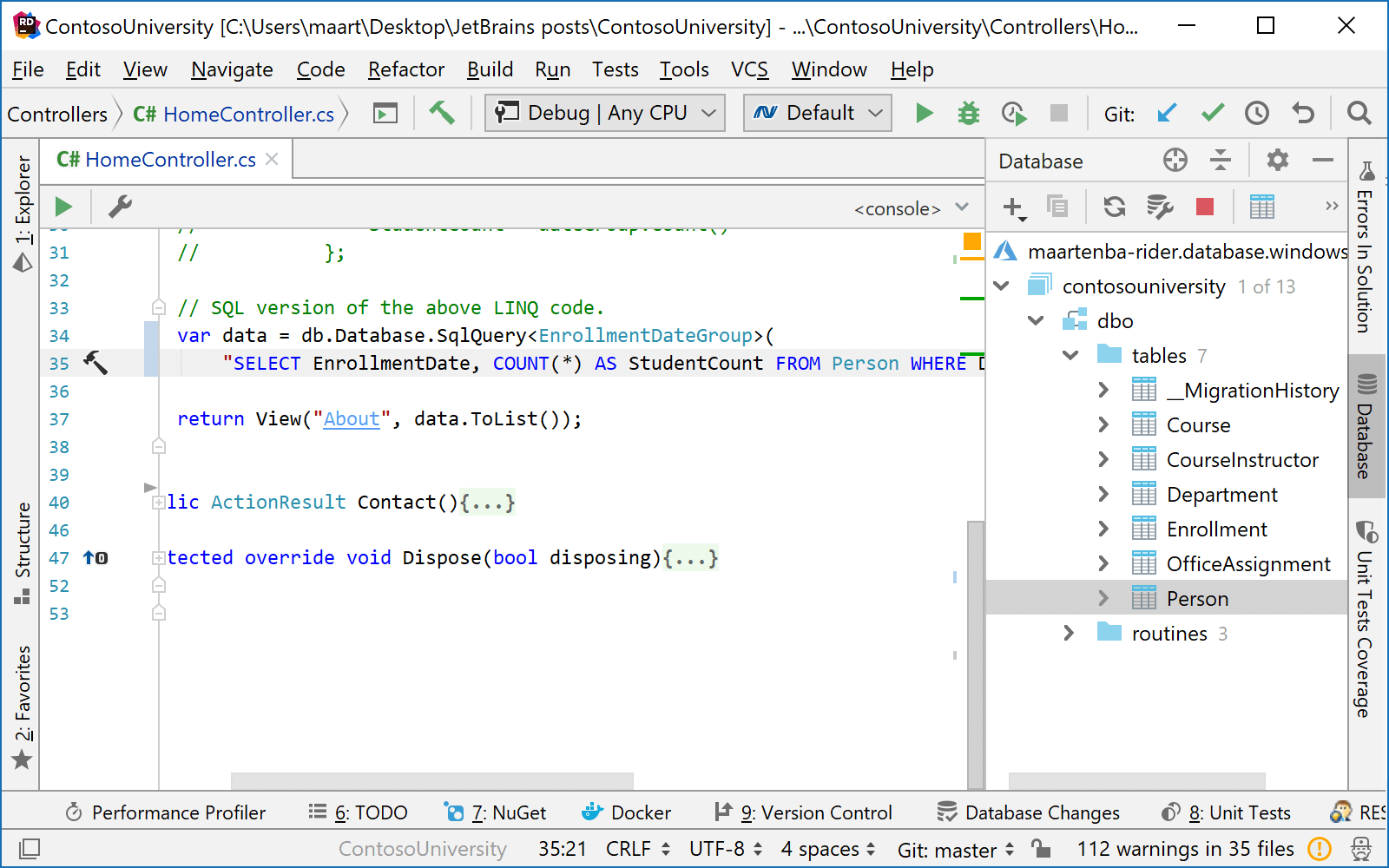 No more need to open up a database console and copy/paste a query in there!

Tip: check our blog series to learn more about working with databases in Rider.

Previously, when working with language injections, we would have to manually escape special characters that were not allowed inside the “host” language. For example when injecting JSON into a string, we’d still have to escape " to \".

Rider 2018.3 adds the ability to edit an injected language fragment in a separate editor, and ensures that the contents we are editing are properly escaped in the original document: 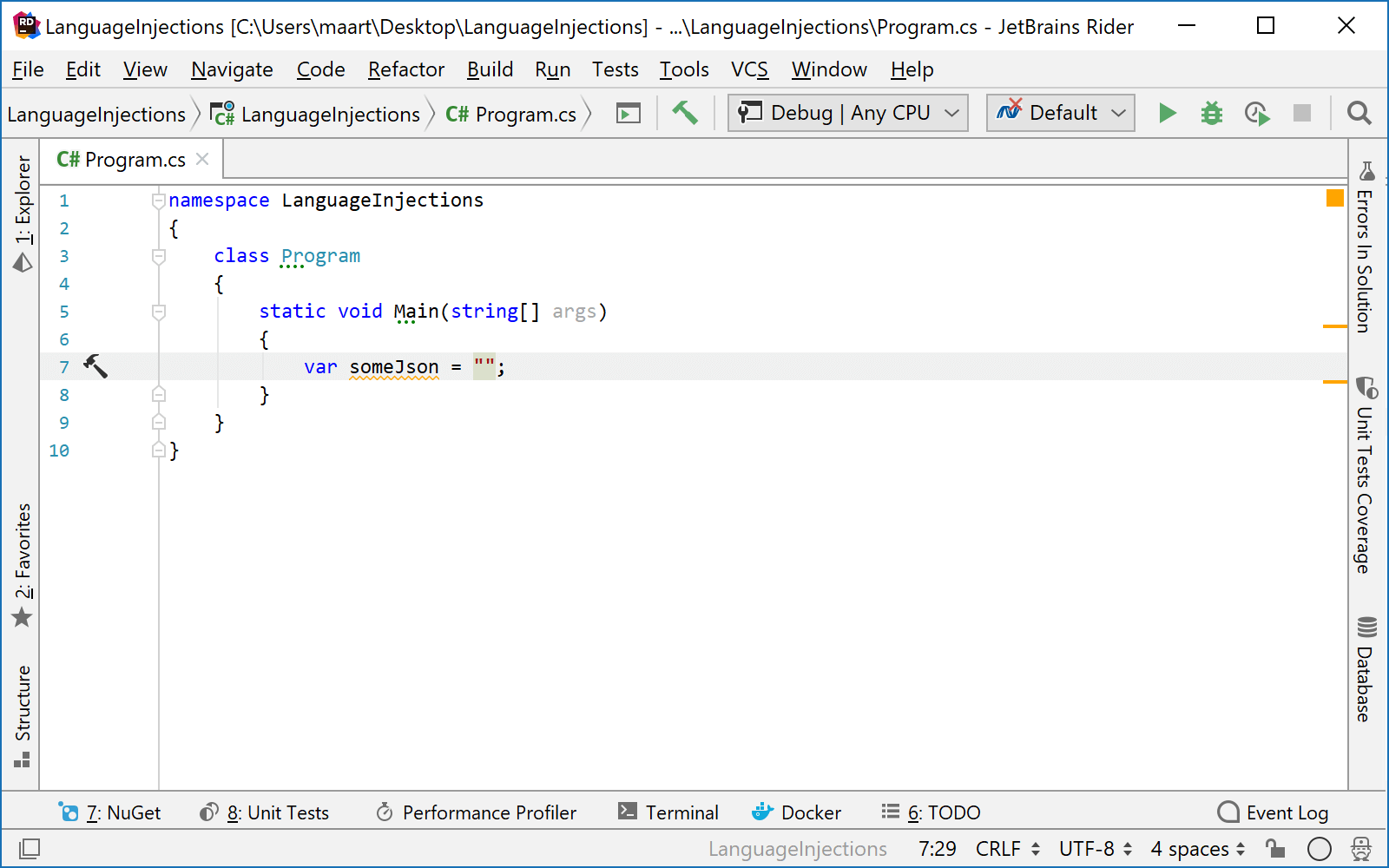 This works for SQL as well, including context actions (Alt+Enter): 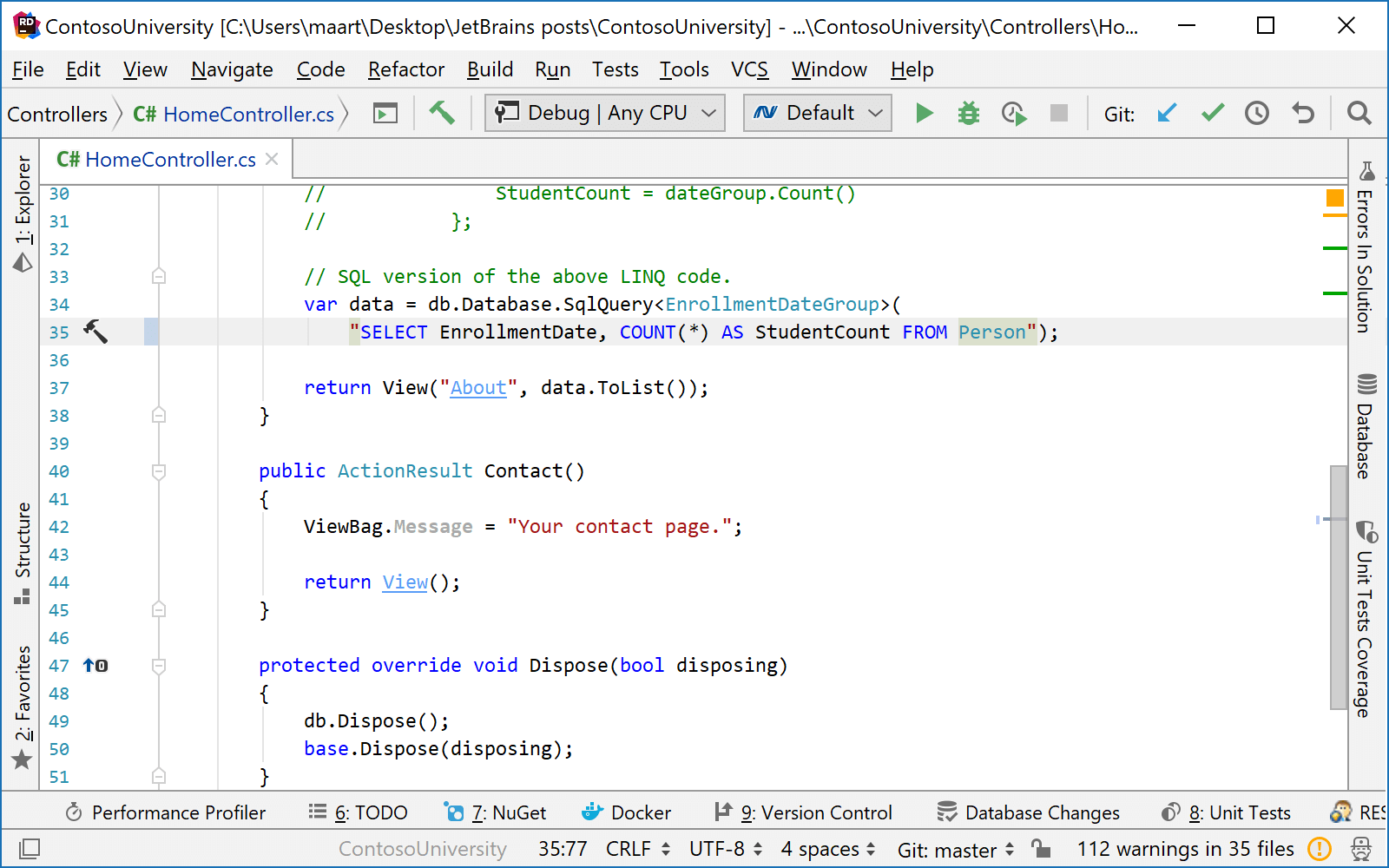 Marking a string as an injected language only applies to our local Rider instance. To share language injections with team members, we can add a // language={language-name} comment on the line before the string literal. However, that does require some discipline.

We can add our own patterns in Rider’s settings, under Editor | Language Injections: 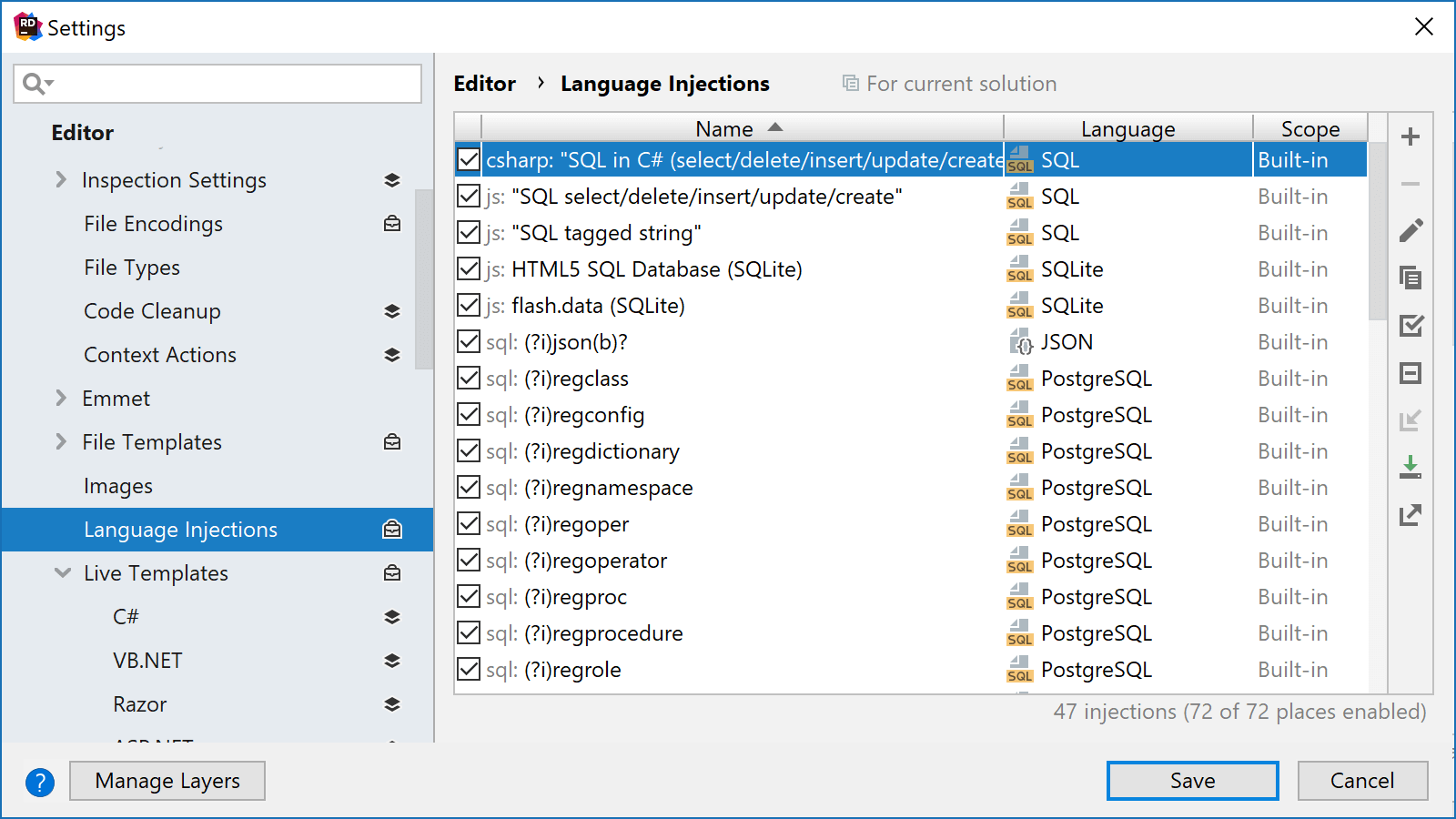 Have a look at the existing ones for inspiration.

So far, we have covered support for SQL language injections. For Rider 2018.3, we have been hard at work to support injecting additional languages.

By merging language injection functionality from IntelliJ IDEA and ReSharper, we now support languages like CSS, HTML, JSON, regular expressions and JavaScript, as well as SQL, XML, MsBuild, YAML, and many more.

This works because we maintain a large collection of external annotations, where we keep information about the .NET base class library (BCL) and various open-source projects. The Regex.Matches example can be seen here.

Tip: check our blog series about how code annotations can help make Rider smarter on your code base!

Currently, Rider (and ReSharper) do not have external annotations that would, for example, annotate methods in Entity Framework and Dapper. The automatic language injection patterns described earlier should help for these cases.