TypeScript has become a popular language, for use on both the client and server. In this blog post, you’ll learn some basics about writing TypeScript, and how Rider can make TypeScript enjoyable.

TypeScript must be compiled to JavaScript (technically a transpiler). Rider can be configured to compile it automatically when changes are made (Preferences | Languages and Frameworks | TypeScript, check TypeScript Language Service | Recompile on changes). You can choose to use the TypeScript tool window to manually compile instead. Errors are shown in the tool window – in the following example, compile errors happened because the argument types are missing. 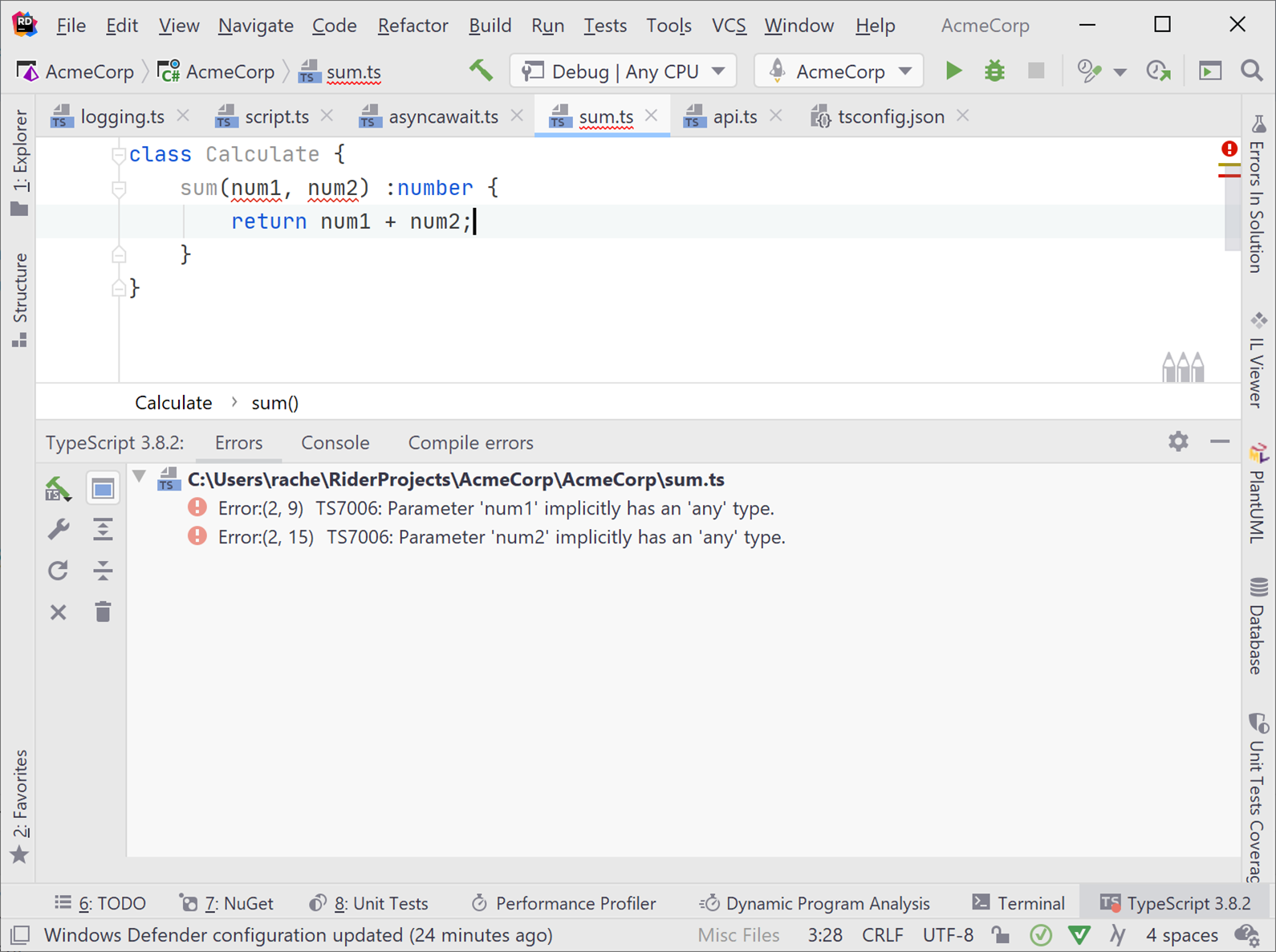 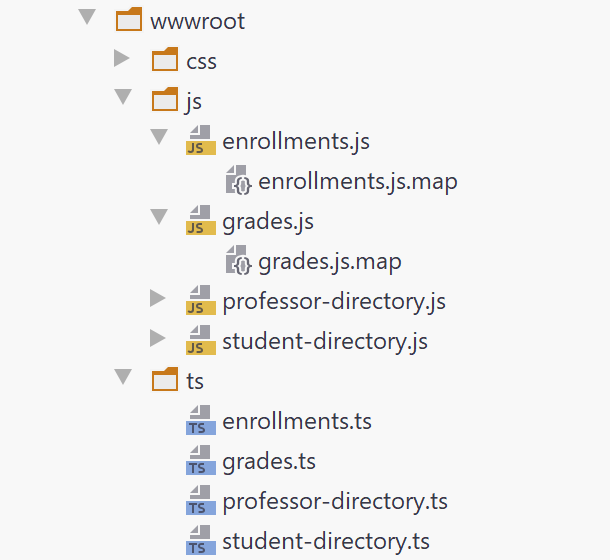 Source maps are used so that debugging tools can map code between TypeScript and JavaScript, since tools can only debug JavaScript. To turn source maps off for production, set "sourcemap":false in the tsconfig.json file.

Let’s start with the star of the show – Types! To start, TypeScript will simply infer the type based on its usage. You don’t actually have to declare the variable with a specific type in mind. But you probably want to use TypeScript for the types (and other features) so let’s take a look at them.

As you might expect, there are two kinds of types, basic and advanced. Declaring and using a type is simple, following this format let | const variableName: type = value;:

A special file named lib.d.ts ships with TypeScript. This file includes a definition of the types. If you want to view any particular type, you can use Go To Declaration F12, and Rider will navigate to the type declaration for you to inspect it.

Functions that have many arguments often need to be refactored for maintainability and readability. This is especially true when some JSON is returned from an API and that data needs to be passed into a function. You can convert from multiple arguments to a single object by using Rider’s Arguments to Object intention (Alt+Enter). 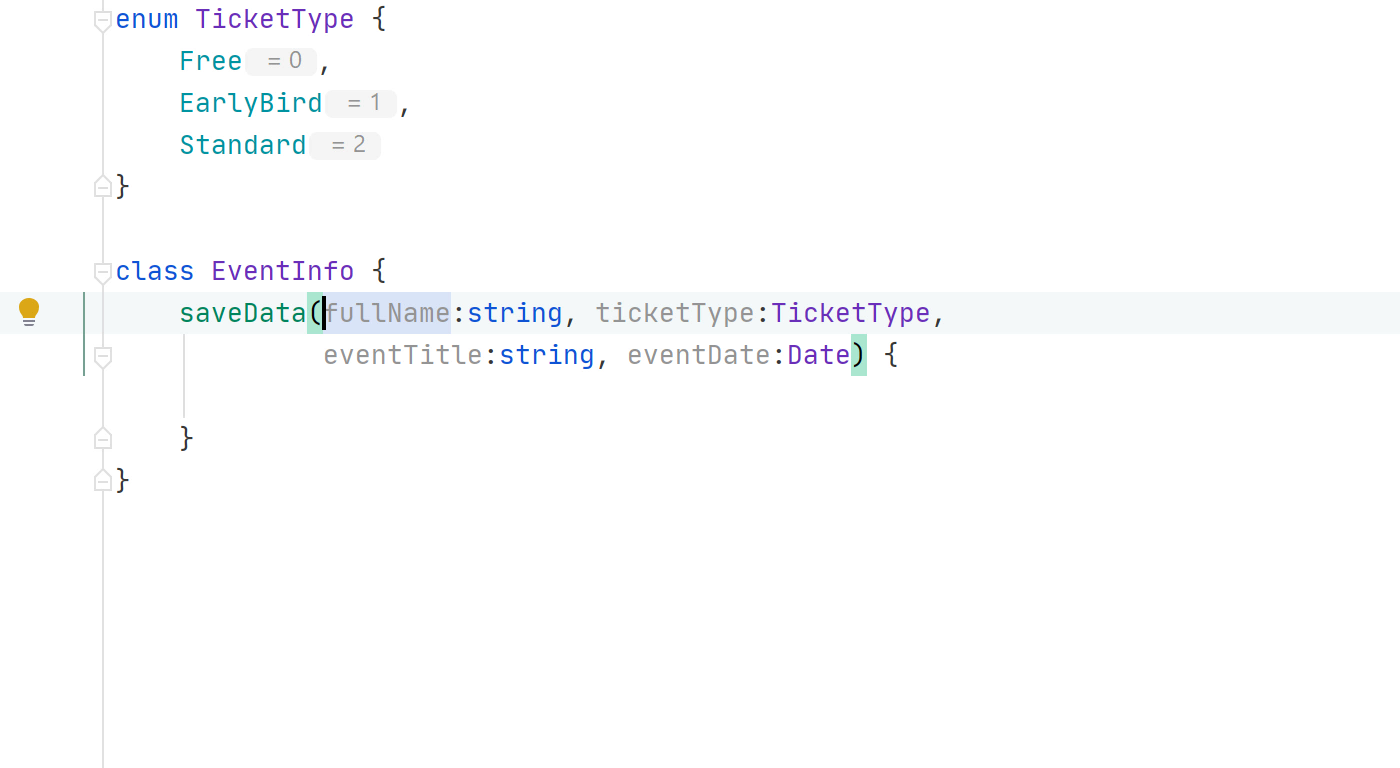 Similarly, there are times when we need to take multiple expressions that aren’t exactly DRY and refactor them into something more maintainable. That’s where Rider’s Introduce Variable comes in handy. Once again, Alt+Enter to the rescue as we highlight the code in question and have Rider modify it so it’s more manageable.

Since JavaScript rules web development, it’s a natural leap to use TypeScript for the web as well. Rider has project templates for Angular, React, React + Redux out of the box, bundled with the ASP.NET/ASP.NET Core templates. You can use Vue and other JavaScript front-end frameworks without a hassle. For more information about React development, see Part 1 and Part 2 of the React + TypeScript + TDD video series by JetBrains advocate Paul Everitt.

Because TypeScript is also plain old JavaScript, it’s no problem using it for web development. Rider, with the WebStorm engine behind it, makes working with the DOM a breeze.

Making async calls to APIs is a daily task of web developers. For those maintaining legacy web apps, you may have a lot of code that relies on traditional promises that needs to be converted to the async/await pattern. Rider makes this easy by providing an intention action, so all that’s needed is Alt+Enter, and the code is updated!

Data comes flying at us in many forms: arrays, objects, maps and sets. Destructuring enables us to extract data from these objects into a single manageable variable. This is a technique that’s quite useful, since most web apps that use JavaScript or TypeScript consist of fetching data from an API that is returned in JSON format. In Rider, all that’s needed is Alt+Enter, and away you go, destructuring complex objects into simpler counterparts.

TypeScript is great for object oriented programming! The language provides the concepts of classes, so you can enforce the principles of inheritance, encapsulation, polymorphism, and abstraction. Since TypeScript is a superset of JavaScript, prototypal inheritance also works, for those who must maintain legacy JavaScript applications.

Like most modern programming languages, TypeScript is testable. The following list represents some of the more popular frameworks available, though many others are available.

Whichever you choose, Rider fully supports unit testing in TypeScript/JavaScript. You can install, configure, write, and run tests all from within Rider.

Keep an eye out for blog posts on object-oriented TypeScript and unit testing TypeScript in the following weeks.

Rider has everything you need for building TypeScript apps or migrating JavaScript code to TypeScript. So download Rider today and try it out. Then let us know what you think.