The Developer Ecosystem in 2020: Key Trends for C#

At JetBrains, we make tools for developers, so we keep up with the latest trends and changes in the software development industry. We build many IDEs based on multi-platform software product lines for various programming languages.

Our Developer Ecosystem Survey, which JetBrains runs yearly, aims to reveal the current ambience of the developer world. Today we are happy to share with you the results of the 2020 edition of this survey, focusing on C#.

C# developers largely keep up to date, with roughly half of all C# developers working in version 8. While many still support legacy C# codebases, the results show that all previous versions of C# have fewer developers this year than they did last year. C# 7 is down to 48% from 63%, and C# 6 is down to 27% from 39%, both showing significant drops in usage.

The most popular C# runtime is .NET Framework! While C# developers keep their language skills up to date, many haven’t migrated to .NET Core, yet. However, .NET Core is gaining popularity as 57% of C# developers use it regularly. We suspect that .NET Core will become more popular next year than .NET. 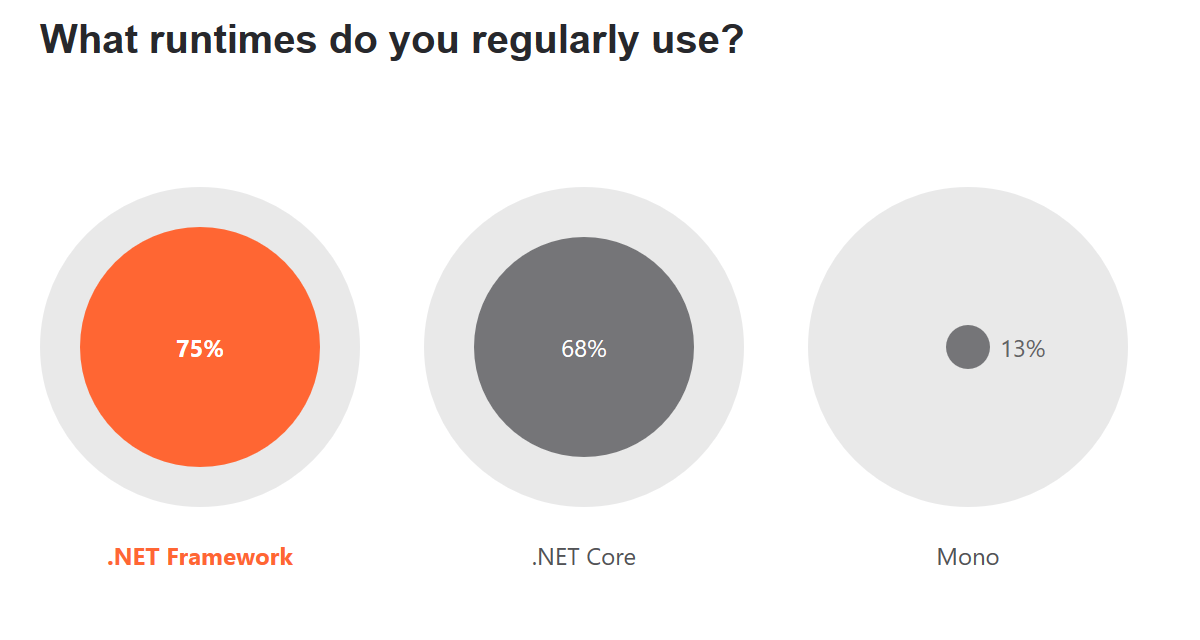 Web developers who create ASP.NET web apps have been the largest group of developers in the .NET development world for some time now. So it’s no surprise that ASP.NET Core is the most popular framework (55%), and ASP.NET MVC is still quite popular (42%). However, ASP.NET MVC has become less popular over time. On the desktop side, the majority of developers use Windows Forms (31%), followed closely by WPF (26%). Framework usage is rather similar to that of last year’s survey, with nearly identical percentages of usage for each framework. 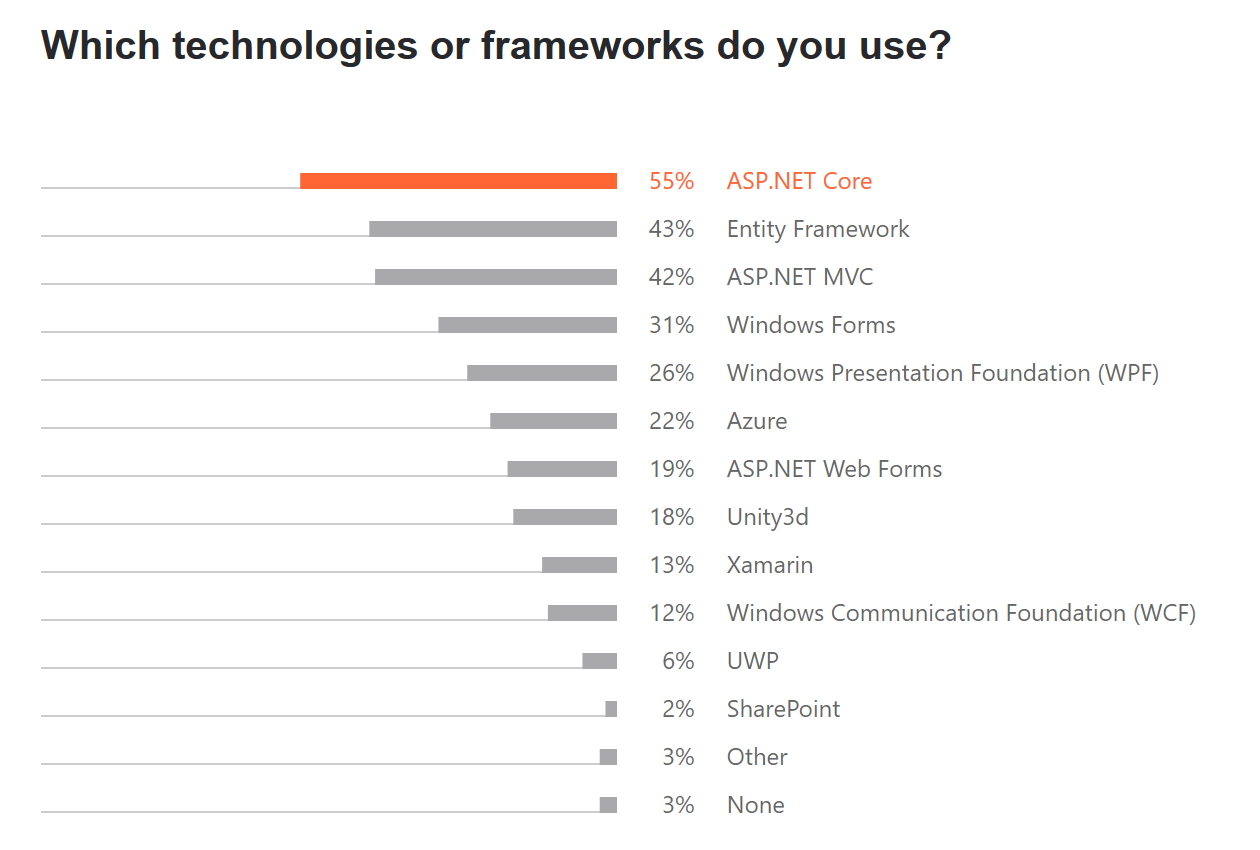 There’s no surprise in the answers to this question! Overwhelmingly, C# developers run Windows – 92% to be exact. Sure, Microsoft has gone cross-platform in recent years, however, enterprise development hasn’t necessarily followed suit, so Windows remains the platform of choice in this realm.

Visual Studio is still the IDE used by most people, but we can see it’s being challenged by Rider and VS Code. Visual Studio for Mac is at 2%, and with 14% of people using macOS, it seems that Visual Studio is not the default choice for Mac developers.

As far as unit testing goes, MS Test took a fairly large drop since last year, from 36% to 20%. NUnit and XUnit are similar in popularity this year, with 37% of developers using NUnit and 32% using XUnit. Both frameworks have gained a following in the past year of a few percentage points each. This year, 16% of developers didn’t respond to the question, implying that they don’t test at all. 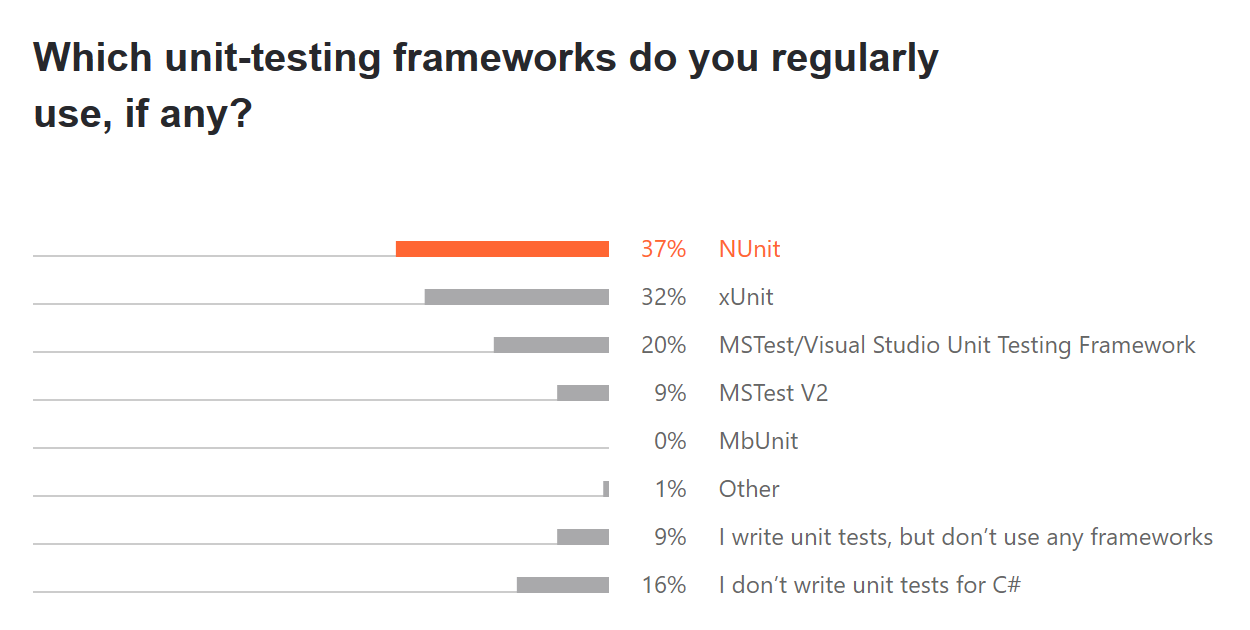 The raw data (obviously, anonymized) will be published later, so you can investigate and analyze it deeper on your own. If you have any comments or thoughts on the C# or .NET facts presented here, share them in the comments below!

Your .NET Team
JetBrains
The Drive to Develop