Rider is already widely used in the Unity development world. There are many well-known Unity game development studios in the list of Rider customers, and the Unity team itself is one of the product’s biggest fans. The drive we feel from this market is so great that several years ago we decided to move forward and make Rider a stellar prospect for game developers.

We noticed some of our Unity customers also use Unreal Engine for their projects, and some other C++-based engines, so we decided that one tool for all of them would be more beneficial.

How Rider can enhance your Unreal Engine development

Why use Rider for creating Unreal Engine games? Here are several compelling reasons.

If you’re wondering how this works under the hood, here’s the short story. We initially developed Rider based on ReSharper, using a proprietary technology to combine ReSharper’s C# capabilities with the IntelliJ Platform. We’ve now re-used this technology to bring ReSharper C++’s understanding of C++ to Rider, including support for C++ proper as well as specific support for Unreal Engine and Blueprints.

The bottomline is that, thanks to the ReSharper C++ engine, hundreds of code analysis checks, instant navigation actions, refactorings, code hints, and other smart abilities for C++ are now available in Rider.

Please note that, although you can use Rider for general C++ development on Windows, you’ll need a .sln file. And on Linux and macOS, Rider is limited to the .uproject model for C++ projects.

The .uproject model is natively supported by Rider on all three major platforms. You don’t need to generate any other project model for your Unreal Engine game to develop it in Rider. This shortens the loop when adding new entities to your game from the Unreal Editor.

Rider reads the Blueprints from your project, shows the usages of such files in your C++ code, and displays the values of the overridden properties. 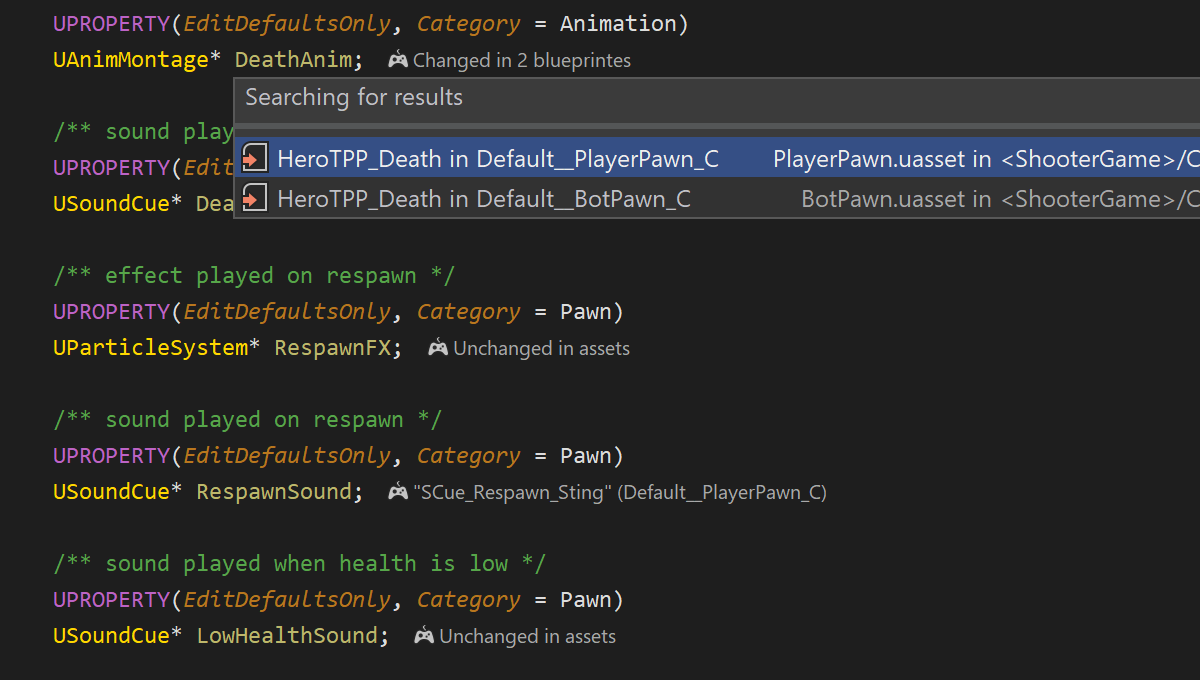 You can also manage your game right inside the IDE and follow the enhanced version of the Unreal Editor log. The UnrealLink and RiderLink plugins enable the integration with Unreal Editor. You can learn more about them in our documentation. 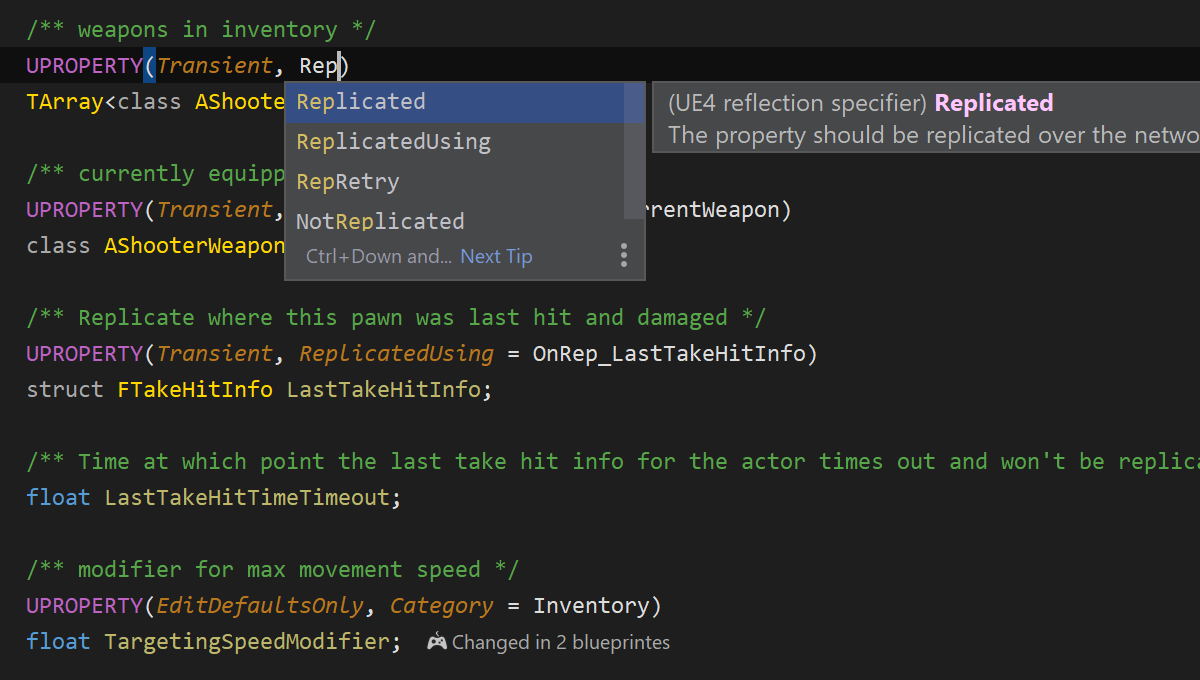 And for Unreal Engine RPC functions, Rider matches them correctly in code navigation and code generation.

Thanks to the ReSharper C++ engine, Rider comes with checks that are generally useful in any C++ code. We’ve also implemented several more specific checks for Unreal Engine code and integrated them with UnrealHeaderTool. The first time you build a UE project, JetBrains Rider finds the UnrealHeaderTool used for the code compilation and then runs the tool in the background as a separate process. This lets it check the file you are editing and show the same errors and warnings that you would normally see at compilation time.

Check out the full list of checks in the documentation.

Here you might ask, what about a debugger? Visual Studio comes with its own proprietary debugger, which can’t be used in other tools. In Rider on Windows, we implemented our own debugger, based on LLDB. It comes with Natvis support, so Rider automatically finds and loads UE4.natvis, providing user-friendly views of Unreal Engine data types. On Linux and macOS, the debugger is also LLDB but from LLVM upstream. 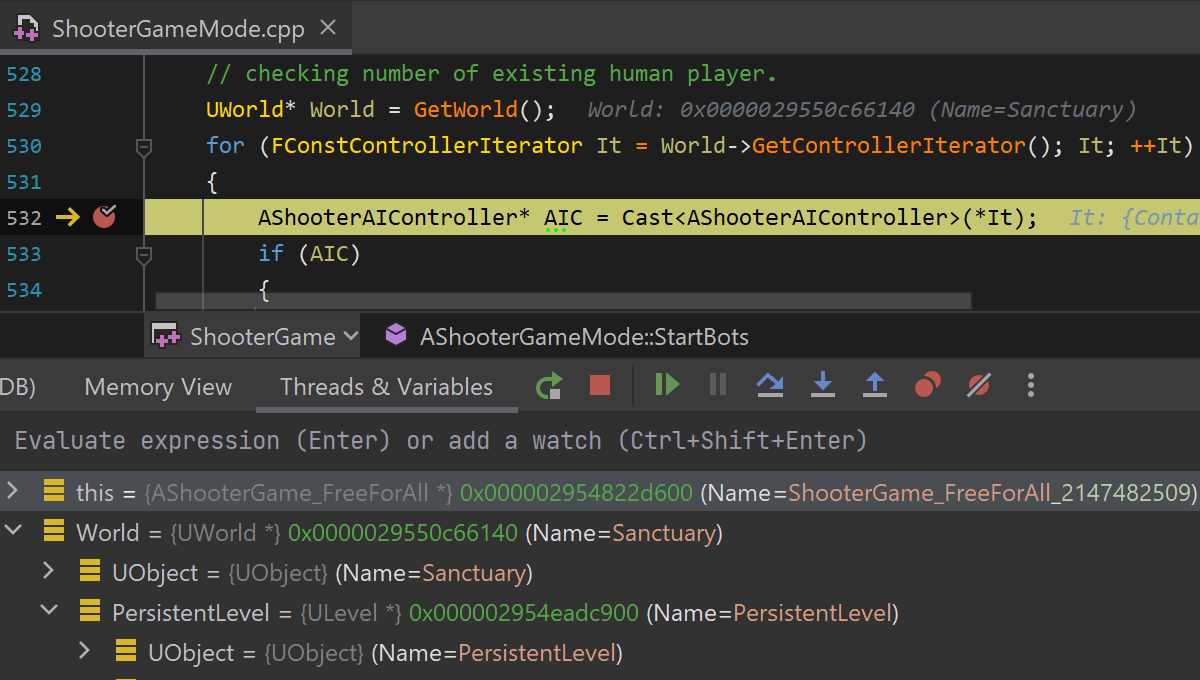 Rider comes with out-of-the-box support for the Unreal Engine Automation Testing framework. Launch tests from the Unit Test tool window or directly from the editor, review their results, and rerun failed, all, or specific tests. For now, this is only available on Windows. Linux and macOS support is coming shortly!

Check out Unreal Engine support in action in this video from Matt Ellis, our developer advocate.

I’m a Rider/dotUltimate/All Products Pack customer, when and how will I get UE support? If your subscription to Rider, dotUltimate, or the All Products Pack is active by the time Rider 2022.1 is released (approximately end of March 2022), you’ll get a new update with UE support included for free.

Why not CLion? CLion is still our general-purpose cross-platform C and C++ IDE. It’s a great choice for embedded development, IOT and self-driving innovations, trading and financial software, telecommunications, and others. But for game development our focus is on Rider.

Do I still need Visual Studio or some of its tools? If you develop on Windows – yes. Microsoft Visual C++ compiler, Windows SDK, and other Visual Studio build tools have to be installed in advance (if you have Visual Studio with C++ support installed, that is enough). There is no such requirement on Linux or macOS.

Your Rider team
JetBrains
The drive to develop

EAP Rider Unreal Engine
Why Your Ticket May End Up in a Different TrackerReSharper 2021.3.3 and Rider 2021.3.3 Released