Modern development workflows emphasize isolation and reproducability in development and production. Docker and its platform approach to containers has become very popular. With PyCharm Professional Edition 5, Docker is now supported as a remote interpreter.

Let’s take a look at PyCharm’s Docker integration in action.

In Python, when you run an application – a Django site, a database script, etc. – you are running it in an environment. Python has some tools to manage the environment and make it reproducible, such as virtual environments, pip requirements.txt files, and setup.py dependencies. But what about the non-Python parts of application?

Containers are one solution to this. In Docker, a container is an isolated universe with software, running inside your computer. They are fast and easy to create, start, stop, and destroy. This is ideal, not just for development, but for deployment as well.

PyCharm 5 provides the beginning of a series of steps towards productive development using containers and Docker. Namely, PyCharm 5 supports project interpreters that are executed in a Docker container.

First, make sure docker and docker-machine are setup in your environment. The Docker installation is painless and the website docs are quite friendly. You’ll need a Docker “host” virtual machine setup and running, including on Linux. On Windows and OS X, installing the Docker Toolbox is effortless.

Next, we have to decide what software we want in our containers. In Docker, containers are built using “images”: collections of pre-installed software plus configuration that is called during container creation. Unlike other interpreters in PyCharm, you don’t visit the Project Interpreter preferences to add Python packages. All dependencies need to be baked into the Docker image you choose.

This blog post is based on the “minimum/docker-django-mysite“ Docker image, which includes enough Python/Django software to run the PyCharm-generated Django starter project. You can fetch that onto your system with this command:

Once that Docker image is locally available and the Docker “host” is running and knows about it, PyCharm can make Docker interpreters for your project, as containers based on that image.

Alternatively, you can skip this step and later pull in the image while creating the Docker-based remote interpreter by simply typing in the image name during creation.

Note: You have the option of making your own image as well, using a Dockerfile. Once you make the image, you can tell PyCharm to make Docker interpreters based on it.

Let’s make a Django project, then make a Docker interpreter for it. In PyCharm, choose File -> New Project, click on Django, and follow the normal process for making a Django project.

The result of this step is a directory on your local computer with sample Django code and a Django-specific PyCharm Run Configuration.

On to the important part. We need to define a “remote interpreter” that runs in a PyCharm Docker container.

Click the menu dropdown for Machine Name. It will likely have one entry named default. Choose that, and you will see the following: 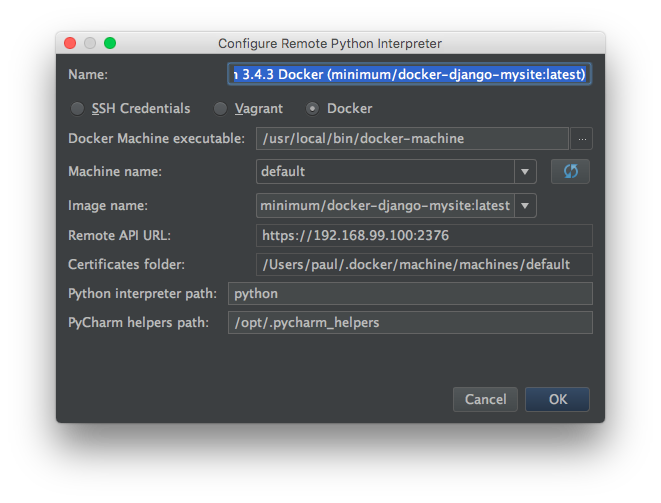 Choosing default gives PyCharm a way to find the Docker daemon, which can let PyCharm know which images are available locally. Hence the dropdown for Images. Click on the dropdown and choose minimum/docker-django-mysite:latest as the image, then click Ok.

You now have a Docker container that will be used as your project interpreter. PyCharm features like autocompletion, code inspections, and checks will be driven by this interpreter.

Now that we have a Docker container for our project interpreter, let’s use our Django-flavored Run Configuration to run it. Just to be safe, edit the run configuration to make sure it is using the Docker-oriented interpreter.

What does PyCharm do when it runs this configuration:

If you are running PyCharm 5.0.2 or older, there is one fix you need to do:

When you click the “Run” button, Django will be started. Yay, we are running a container! In fact, we can go on to test running, debugging, code coverage, profiling, and all the other ways to run a configuration. But first, let’s click the link in the console to open the Django site in our browser: 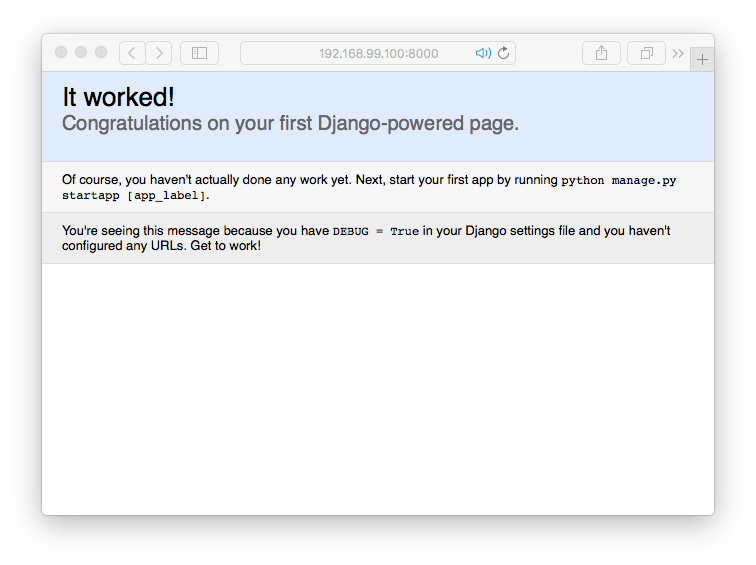 You can confirm this using the following Docker commands:

This shows the most recently-run container. As you can see, our minimum/docker-django-mysite-based container is currently running.

Likewise, when you click the “Stop” button in PyCharm to stop the running Django configuration, PyCharm not only stops Django, but it also stops the Docker container. In fact, it deletes the container. Each time you run, PyCharm creates a new Docker container and starts it.

You can confirm this. After re-starting the Django run configuration, type:

The value in the CONTAINER ID column, as well as the NAMES value, is different from the previous values we got from running docker ps -l.

Docker integration in PyCharm is already useful, but is still only a start. Much more is being done for future releases. For example:

With this release we’ve shown the beginnings of what we can do with Docker integration, and the results are promising. Docker has the potential to be a first-class part of PyCharm’s development workflow.

R plugin is announcing some helpful features to track execution of your R code: 1. Execute your R file as a runnable process, job. Jobs are shown in a separate tab in the R console. You can preview the job status (succeeded or failed), the duration of the execution, and the time you launched the job. When starting a new job, you can specify the way you want to process the results of the job execution. You can restrict copying it, copy to the global environment, or copy it into a separate variable. To preview the results, switch to the Variables pane: 2. Try new ways to quickly

PyCharm 2020.1 comes with new Database export features that make exporting data easier. You can now see previews of the data that you want to export, letting you have a quick glance of what the data will look like. Furthermore, as many of our users prefer to export to Excel files, we've also added the ability to export Excel files as well. As a note, there is no preview for Excel, as it is a binary file. To add to this, PyCharm now lets you save your scripts into configurations, so that you can run them whenever you want to. Not only can you type in the script directly, you can also

Although it has not been a while since our last update release, we’re ready to announce some important enhancements and new features: Long-awaited support of R 4.0.0 . Download it and try with the R plugin for PyCharm. In response to your feedback, we improved user interface and workflows for exporting generated plots into the portable network graphics (.png).  Just pull the lower-right corner of the plot to adjust its size. There are more helpful options to keep up the image quality. You can also enable opening the exported image right after clicking the Save button. Want to have your

The Version Control System support in PyCharm has been revamped with a new and improved commit workflow as well as an interactive rebasing option. This means, that it gives you more control over the way you commit your changes. New Commit Tool Window There are a couple of changes that are noteworthy. Now, when you commit, it no longer opens up a dialog box (although if you like the old way of doing things, you can keep it that way). Instead, what you see is the commit panel. The commit panel keeps track of all the changes that you have made in your versioned files. This change from a non-