The State of Developer Ecosystem 2021 report is now available!

It’s that time of year again, when JetBrains publishes the findings from our State of Developer Ecosystem Survey! For 2021, we’ve surveyed 31,743 developers from 183 countries or regions to see what are the latest trends and changes in the software development industry. We run this survey yearly for several years to track developer trends. The full report for 2021 is now available. We invite you to read through the key takeaways and detailed data for many programming languages and areas of software development.

C# usage has remained fairly stable over the past year. Most folks are still working with the same versions, however, one-third have been doing some work in the latest version: C# 9.

Take a look at these stats, side by side from last year. Versions 5 and 6 have the exact same amount of usage, while it appears a few have moved from C# 7 to 8, or more likely, 9. We can’t draw hard conclusions from this single chart as to which framework folks have migrated from and to, but it seems that most movement was away from version 7 toward version 9. Progress!

After reviewing the results, JetBrains employee Khalid Abuhakmeh weighed in with some commentary on why the C# landscape looks this way.

In my experience, developers target newer versions of C# but don’t use all of the language features immediately. ReSharper and Rider’s language usage opportunity inspections and quick fixes are a great way to learn about the latest additions to C#.

Onto the .NET Runtime. .NET Core has remained stable in usage since last year. However, there’s been less usage of the .NET Framework of about 13% – some of this usage may be .NET 5, since the rebranding from .NET Core to just .NET was a bit confusing for many. .NET 5 wasn’t in last year’s survey but is in use by about one-third of developers. Nonetheless, .NET remains a strong and mature platform for developers. 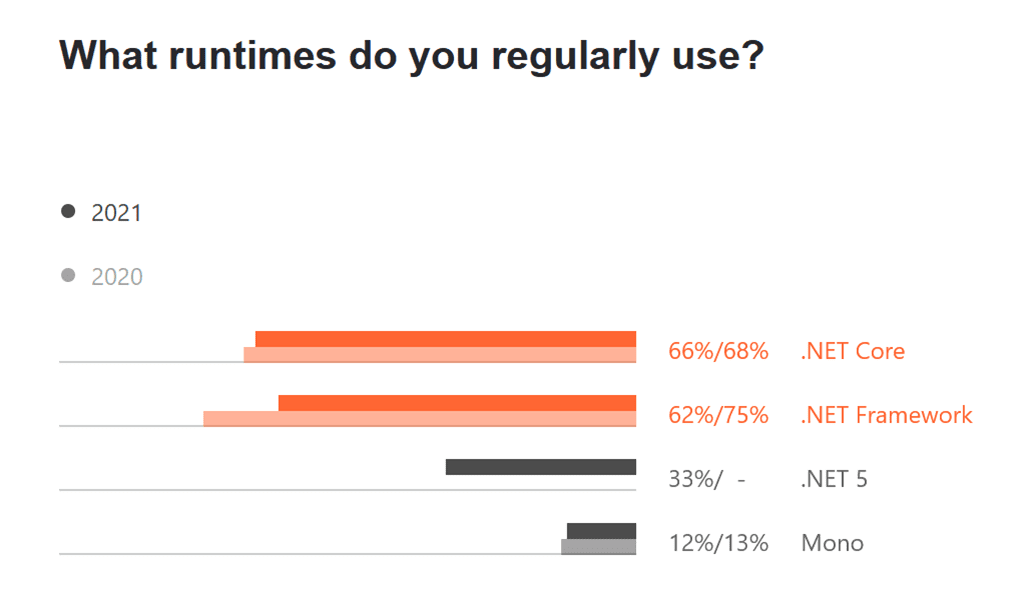 And Maarten Balliauw of JetBrains explains popular project types that are happening within the .NET and .NET Core frameworks.

It seems that nowadays .NET developers mostly do C# combined with a web language (43% overall)

File the next set of responses under “Of course, we all could have guessed this one”, but there’s a twist. Windows is the most popular OS for .NET development environments, coming in at 61% usage. That’s not surprising. But many wouldn’t have guessed that Linux overtook macOS for the #2 spot with 47% usage.

In modern development teams using containers and the cloud, it’s not uncommon for folks to use multiple OSes for development. That is reflected here as all major operating systems show significant usage.

While Visual Studio continues to be a widely used IDE, Rider is quite popular too. In a related note, a recent StackOverflow survey uncovered that Rider is one of the top-3 most loved tools. Developers who use Rider absolutely love Rider.

We’ve asked developers which diagnostic tools they’re using for troubleshooting and application health analysis. And our results say that most developers aren’t any diagnostic tools! We know developers want to create better quality software, so what’s going on here? Folks, your software can perform so much better when you regularly analyze it using tools like dotMemory and dotTrace to monitor health and solve issues. 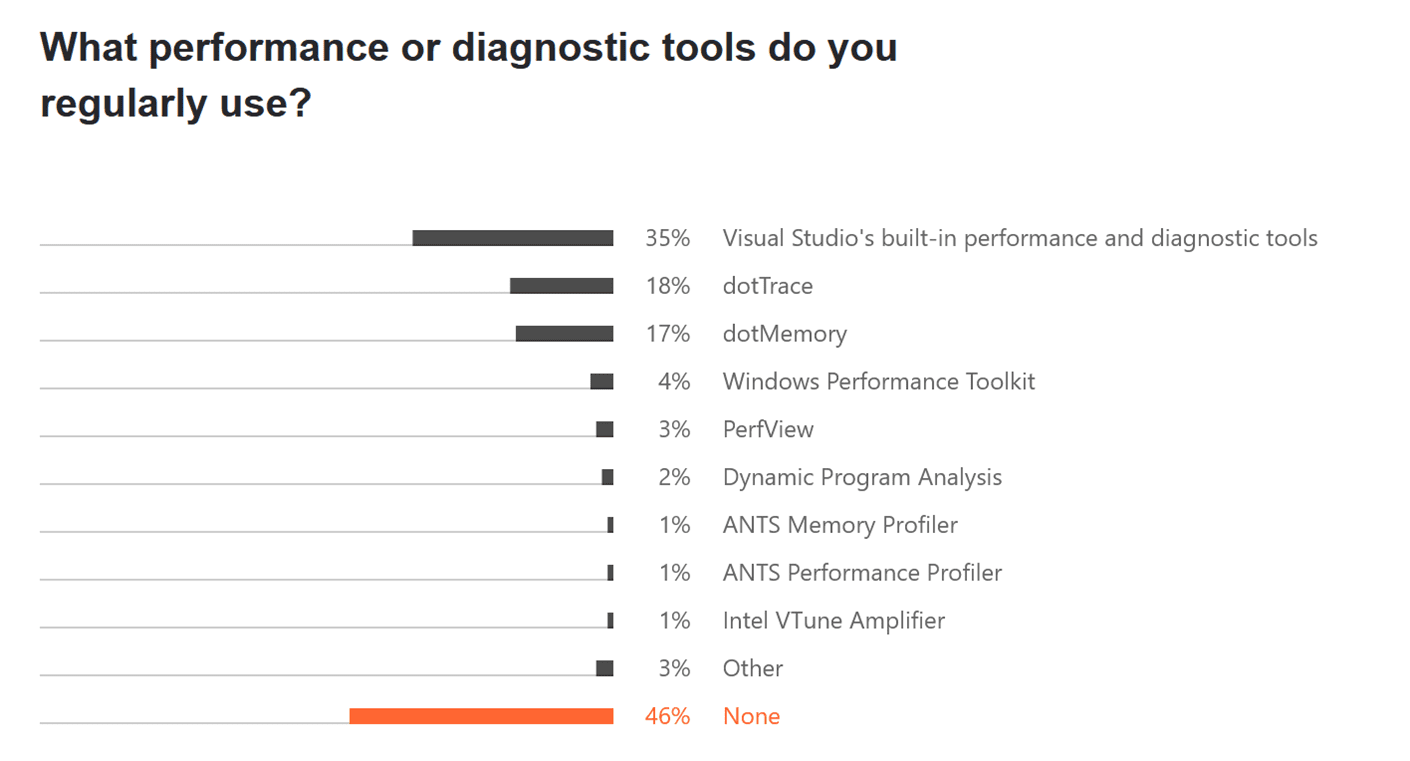 Overall, it appears that the .NET community is relatively stable in terms of trends and product usage from last year to this year. For more information, check out the entire Developer Ecosystem report and see what other communities are doing. If you have comments or questions about the findings presented here, comment below.

Your .NET Team
JetBrains
The Drive to Develop