Symbol Servers and Other Enhancements for Unreal Engine Development in Rider

The new Rider 2022.2 EAP build brings some useful enhancements for Unreal Engine developers. If you’ve never used Rider for Unreal Engine projects, give it a try and experience first-class support for the Unreal Engine reflection mechanism, integration with Blueprints, and other benefits available on Windows, Linux, and macOS. Learn more on our website.

With the EAP, you can evaluate new features and enhancements for free and share your feedback with us. Please use the Rider issue tracker to report bugs and suggest new features.

Symbol server when debugging on Windows

While Rider works for your Unreal Engine projects on all three major platforms – Windows, Linux, and macOS – this new addition is targeted at Windows developers.

When debugging, sometimes the library symbols are not available on your local machine. In this case, you can use symbol servers. A symbol server is a file server that stores your debug symbols centrally on a server, rather than on each developer’s machine. Then, you can point your debugger to the symbol server to resolve symbol names. Everyone with access can share the same server.

Rider on Windows now supports Microsoft’s approach to symbol servers. You can now point the debugger to the symbol server of your choice in Settings | Build, Execution, Deployment | Debugger | Symbol Servers: 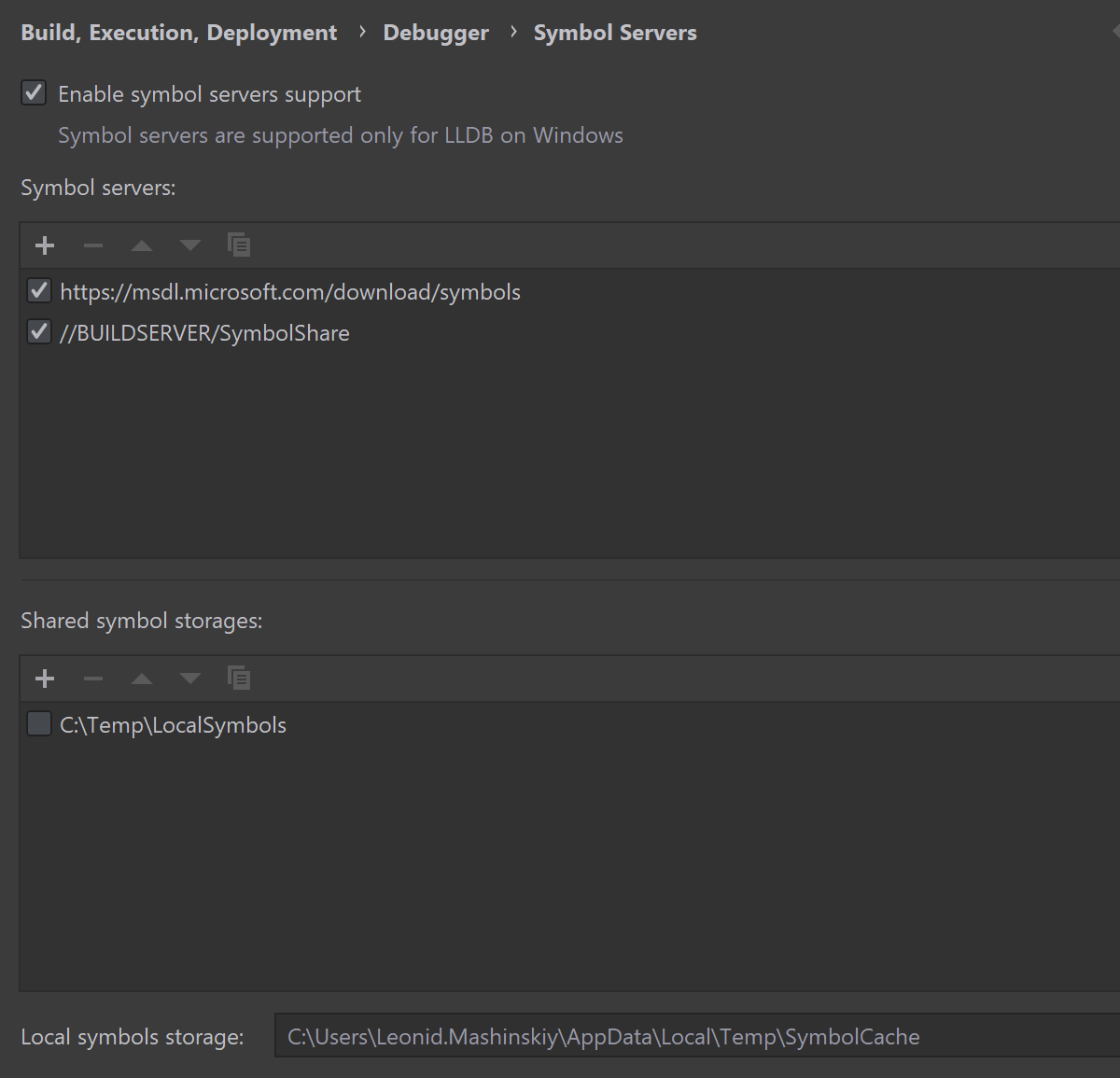 When configured for the first time, the download is triggered at the start of the debugger session. When the symbols are downloaded, library symbols will be correctly resolved. For example, frames from Windows system libraries will be shown.

Before the symbol server is configured: 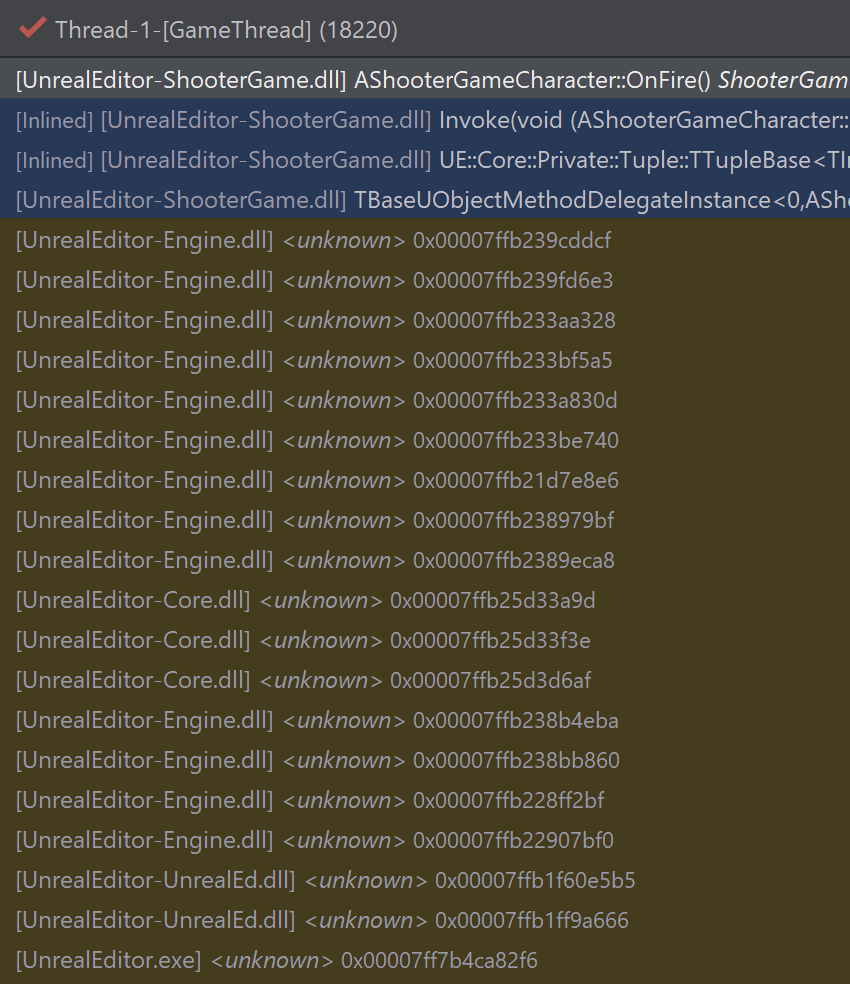 After the symbol server is configured: 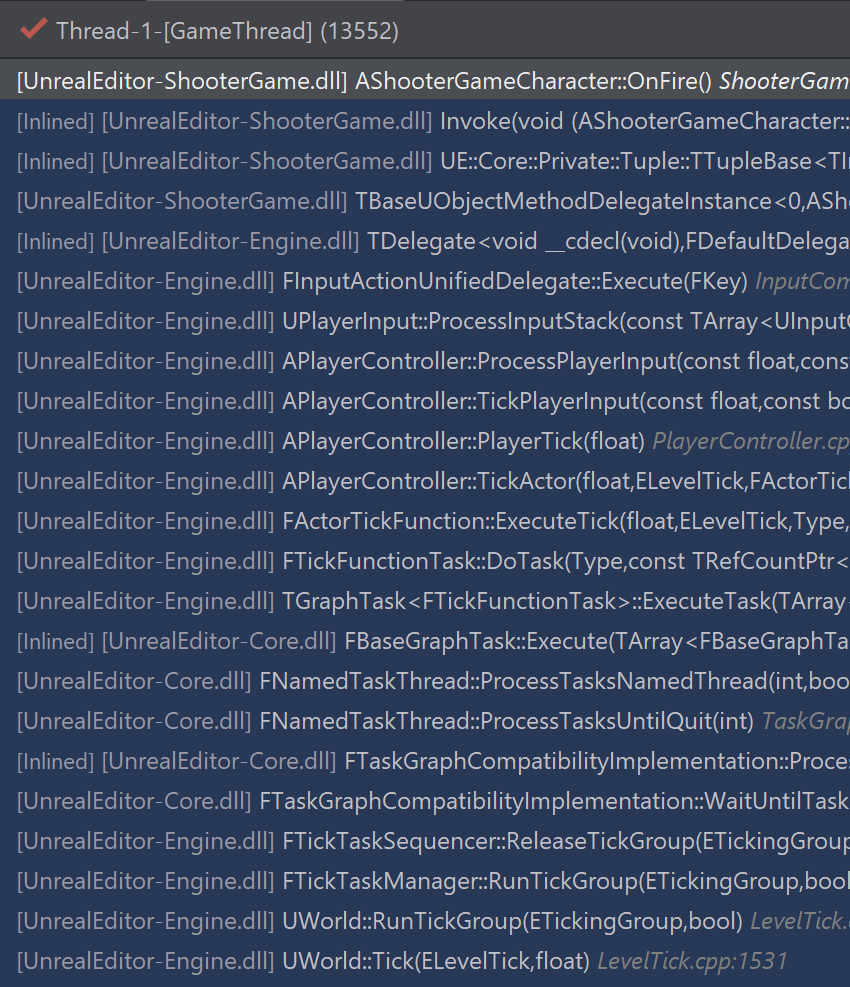 The Enable symbol servers support setting allows a debugger in Rider to use any downloaded symbols cache locally. The directory of this cache can be configured in the settings.

One important limitation: currently only .pdb files are supported, not .exe/.dll files (CPP-29389).

Ability to create a new module in Rider

When creating a new module with game logic, you regularly do many things: add a folder, add a Build.cs file into this folder, create a class that initializes the module, and update the .uproject and Target.cs files. Rider now helps you automate these tasks with the new Add | New Unreal Module… action, available in the solution view via a context menu: 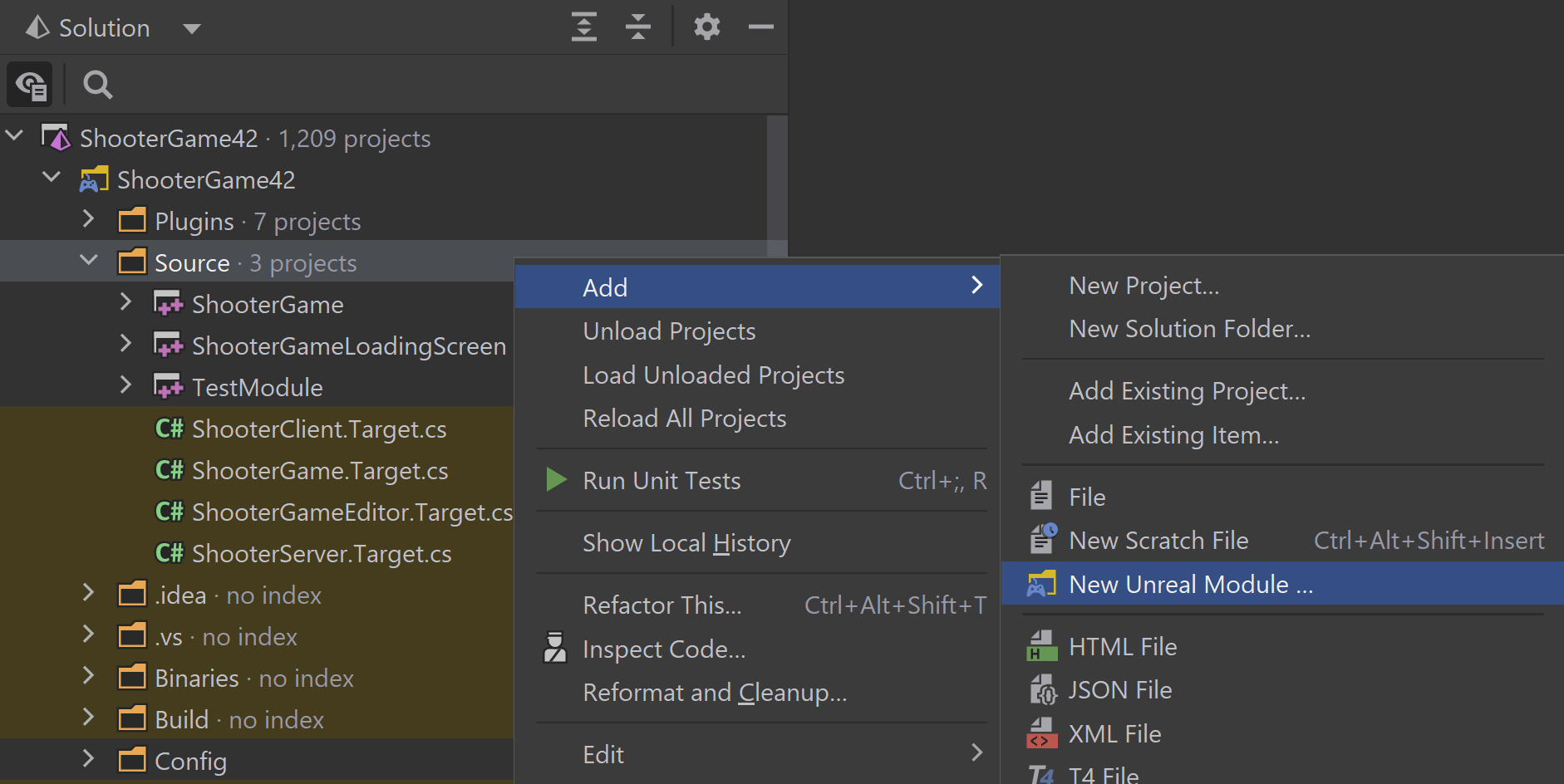 The action opens a dialog where you can enter the new module’s name and type, select the loading phase, and target the files you’d like to be updated with the reference to the new module: 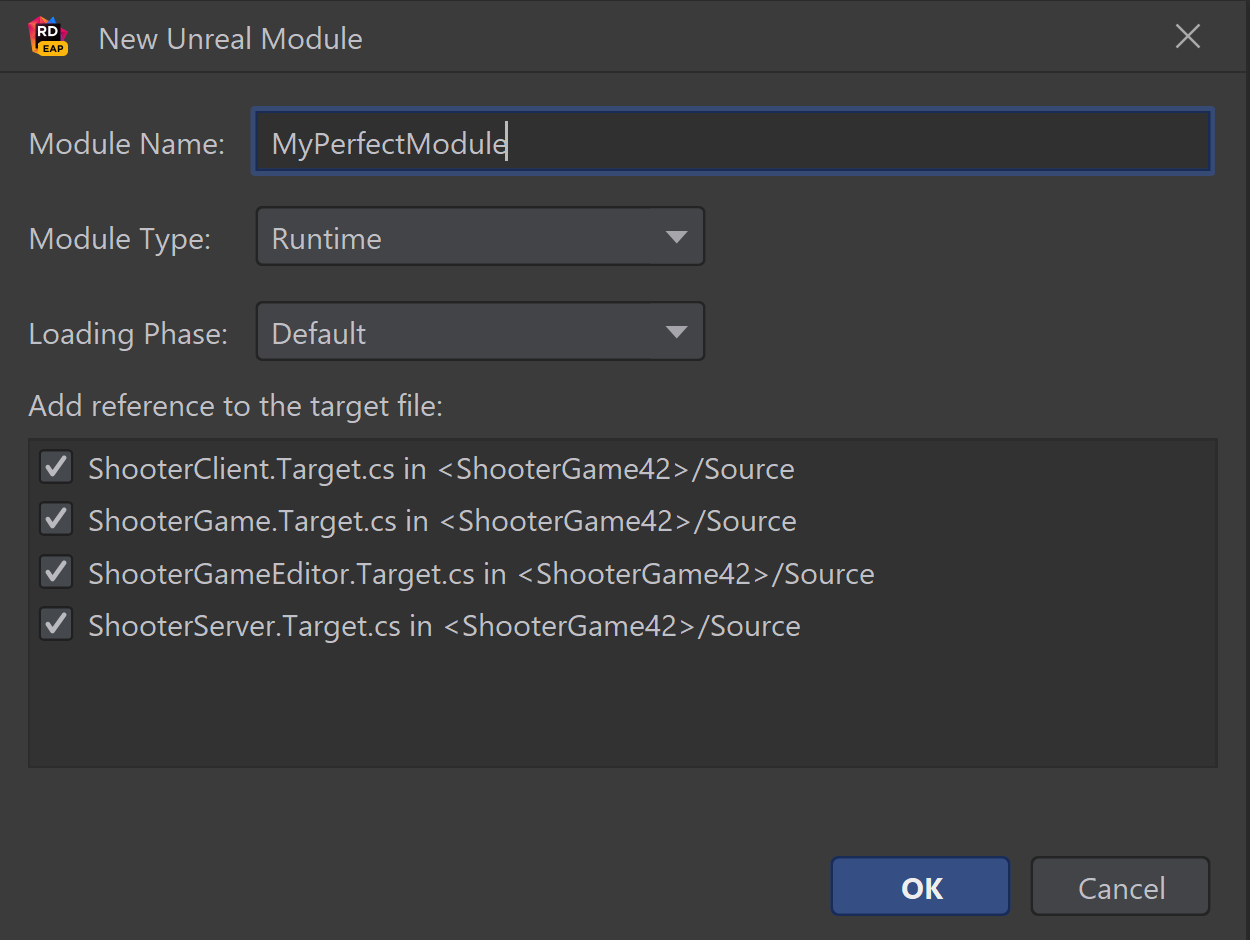 Rider then will generate the module’s source and header files. As well as the Build.cs file.

This works on all platforms – Windows, macOS, and Linux – and for all project models on Windows (.sln and .uproject). Try creating new modules from inside Rider and let us know what you think!

Like ReSharper C++, Rider now supports the Spec tests from the Unreal Engine automation testing framework. If you have a set of tests defined in the Define method after the DEFINE_SPEC macro or the BEGIN_DEFINE_SPEC/END_DEFINE_SPEC macros, Rider will successfully discover them. In the Unit Test Sessions window, you can review the results of the tests and rerun failed, all, or specific tests. 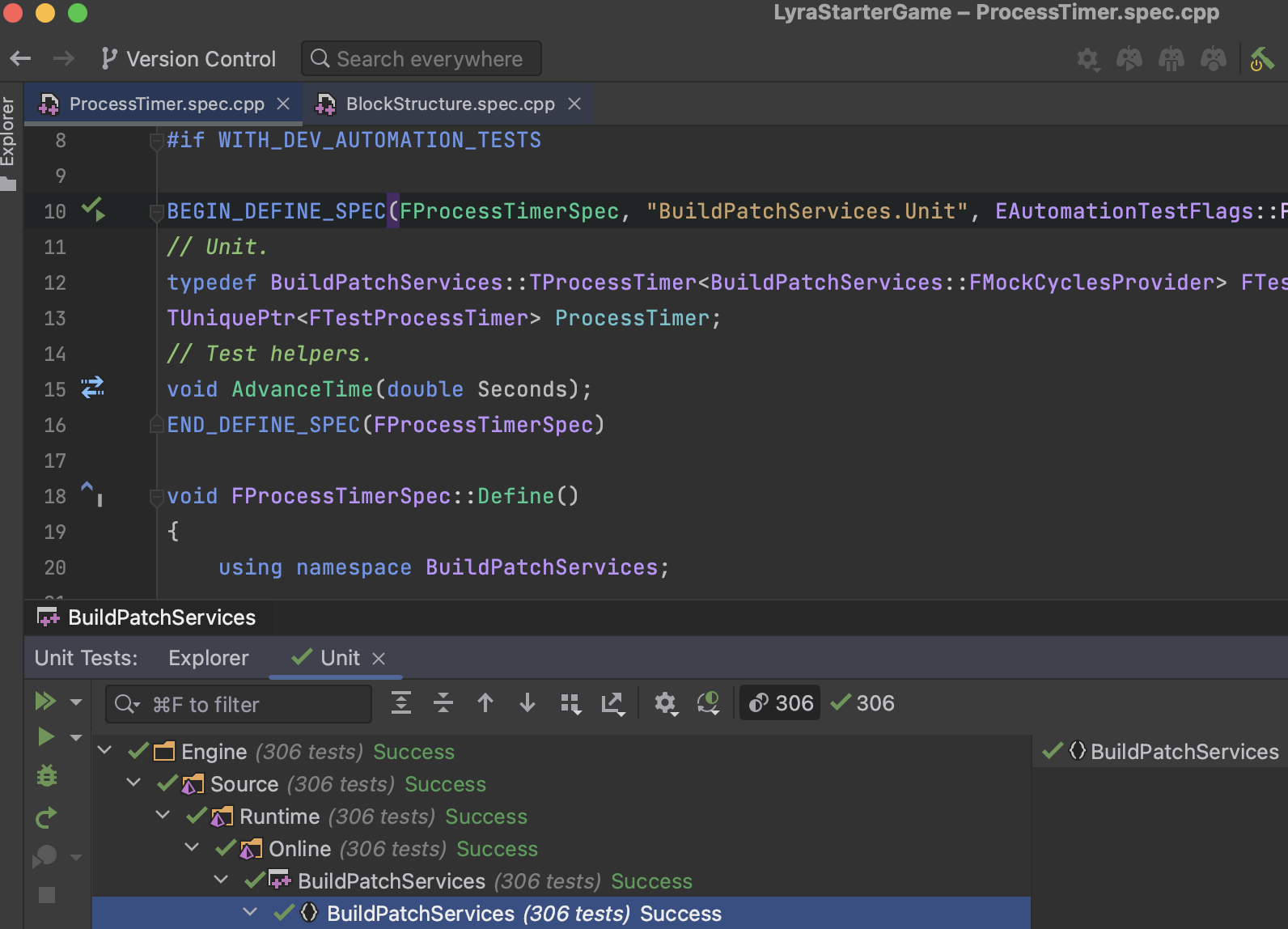 The new Rider 2022.2 EAP build brings some useful enhancements for Unreal Engine developers. We previously told you about Symbol Servers and a new action for creating a new module. This time we want to introduce another action that will hopefully help you develop your Unreal Engine games entities more easily – the ability to create a new Unreal plugin in Rider. DOWNLOAD RIDER EAP Create a new Unreal plugin in Rider If you’ve ever tried creating plugins in Unreal Editor via the New Unreal Plugin button in the Editor's Plugin Browser, this new action in Rider will look quite familiar to you. In

Hello everyone, We’re launching the Rider 2021.2 Early Access Program! We’ve published the first EAP build today, so let’s have a look at what's inside. In case you missed that, starting with the 2021.2 EAP builds of our .NET productivity tools, including Rider (on Windows), we will require .NET Framework 4.7.2 or newer installed on your machine. Learn more here. Code Analysis Do you still use temporary variables to swap variable values? There is a more elegant way! Rider 2021.2 EAP will help you modernize your code with the new Swap via deconstruction quick-fix! There a 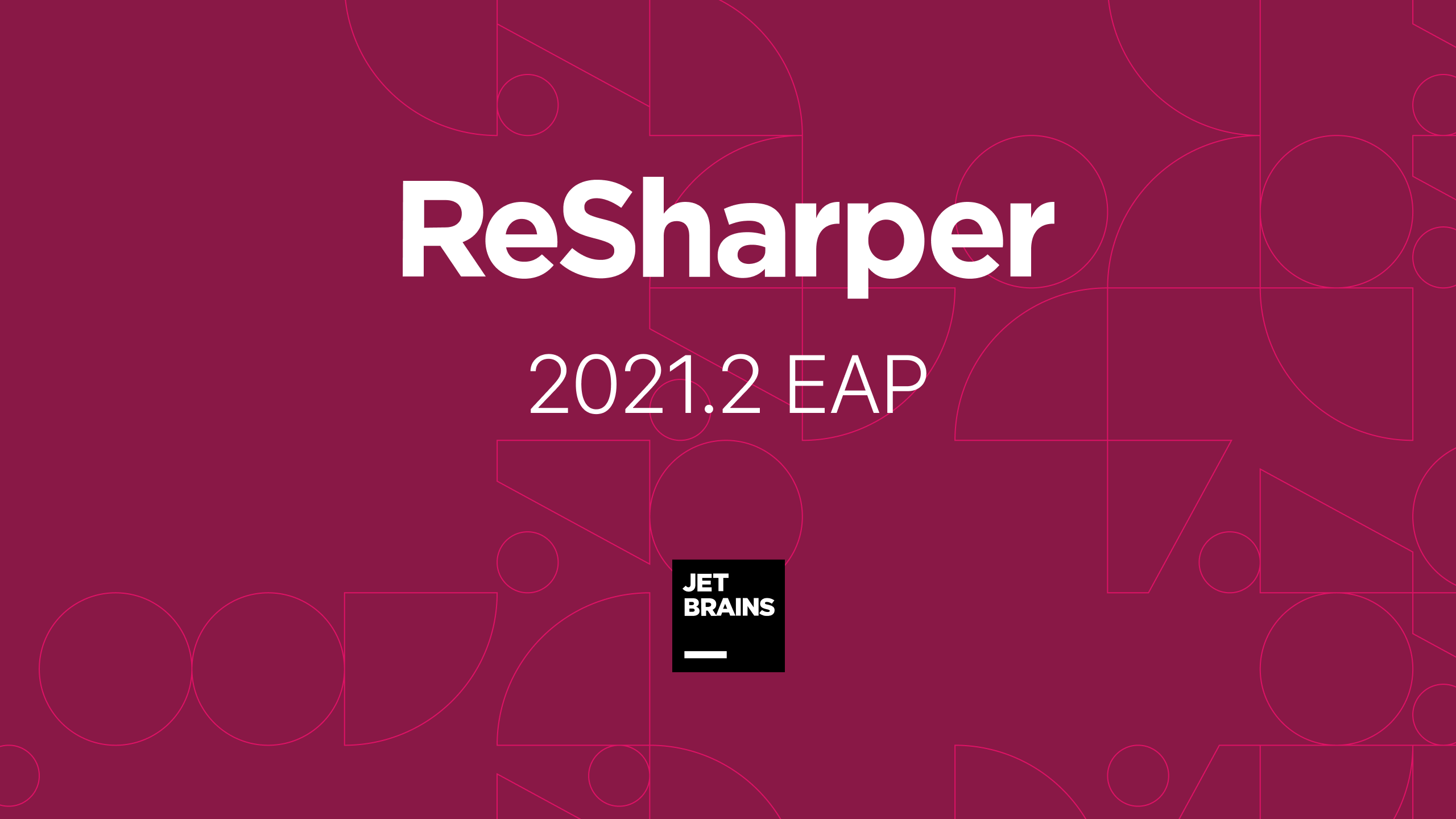 Hello everyone, We’ve just started the Early Access Program for the ReSharper 2021.2 release cycle! Let’s look at what the first EAP build has in store. In case you missed that, starting with the 2021.2 EAP builds of our .NET productivity tools, including ReSharper, we will require .NET Framework 4.7.2 or newer installed on your machine. Learn more here. Code Analysis Do you still use temporary variables to swap variable values? There is a more elegant way! ReSharper 2021.2 EAP will help you modernize your code with the new Swap via deconstruction quick-fix! There are tw

In the Rider 2021.1 Early Access Program (EAP) builds, we’re bringing you.... Scaffolding! Scaffolding makes development using ASP.NET MVC, ASP.NET Web API, or Razor Pages faster and more smooth. Let’s take a look at how the new scaffolding feature in Rider helps you create MVC Controllers, Razor pages, Entity Framework "CRUD", and pages and views for Identity. ASP.NET MVC Scaffolding ASP.NET MVC is a convention and pattern based framework. So tools such as scaffolding use those patterns and conventions to allow you to create controllers and views for your project. Areas in ASP.NET