Have you heard about our new free plugin for the Unity editor? RiderFlow helps manage the scenes, navigate and search through them, and even refactor them. You can download it from the Asset Store, use the Unity package manager to install it, or get RiderFlow.unitypackage directly from our website.

In RiderFlow 2022.1.3 we have sorted out several annoying performance issues which were happening for large scenes:

Previously, the RiderFlow asset was quite heavy – 377 MB. Most of this was the backend packed within the asset. This could be inconvenient, as you’d have to download the backend, wait for unpacking and installation, and then launch the backend to get access to all RiderFlow benefits. We’ve simplified this approach in the new version!

Starting from 2022.1.3, the backend can be downloaded separately, after you install the RiderFlow asset. The asset itself is just 3.5 MB. After you install it, you can immediately use the plugin with bookmarks, notes, sections, toolbars, and replace refactoring. These functions don’t require the backend.

The only features that are unavailable without the backend are the code editor and global find usages. Soon after installing or updating of the already existing RiderFlow plugin, the wizard will appear and suggest downloading the backend:

You can agree and benefit from the full functionality of the plugin, or reject it and keep only the functions that don’t require the backend.

Sorting, highlighting, and other enhancements

Bookmarks are now sorted in scene hierarchy order instead of the random order used before. Camera presets are also now sorted in the alphabetical order by default.

Colored sections in the prefabs can be useful, so with RiderFlow we encourage you to use them. However, in previous versions, when you dragged and dropped such prefabs into the scene it looked just like a normal prefab with no colored sections. RiderFlow now shows the prefab instance’s sections right in the scene. This also works for nested prefabs. 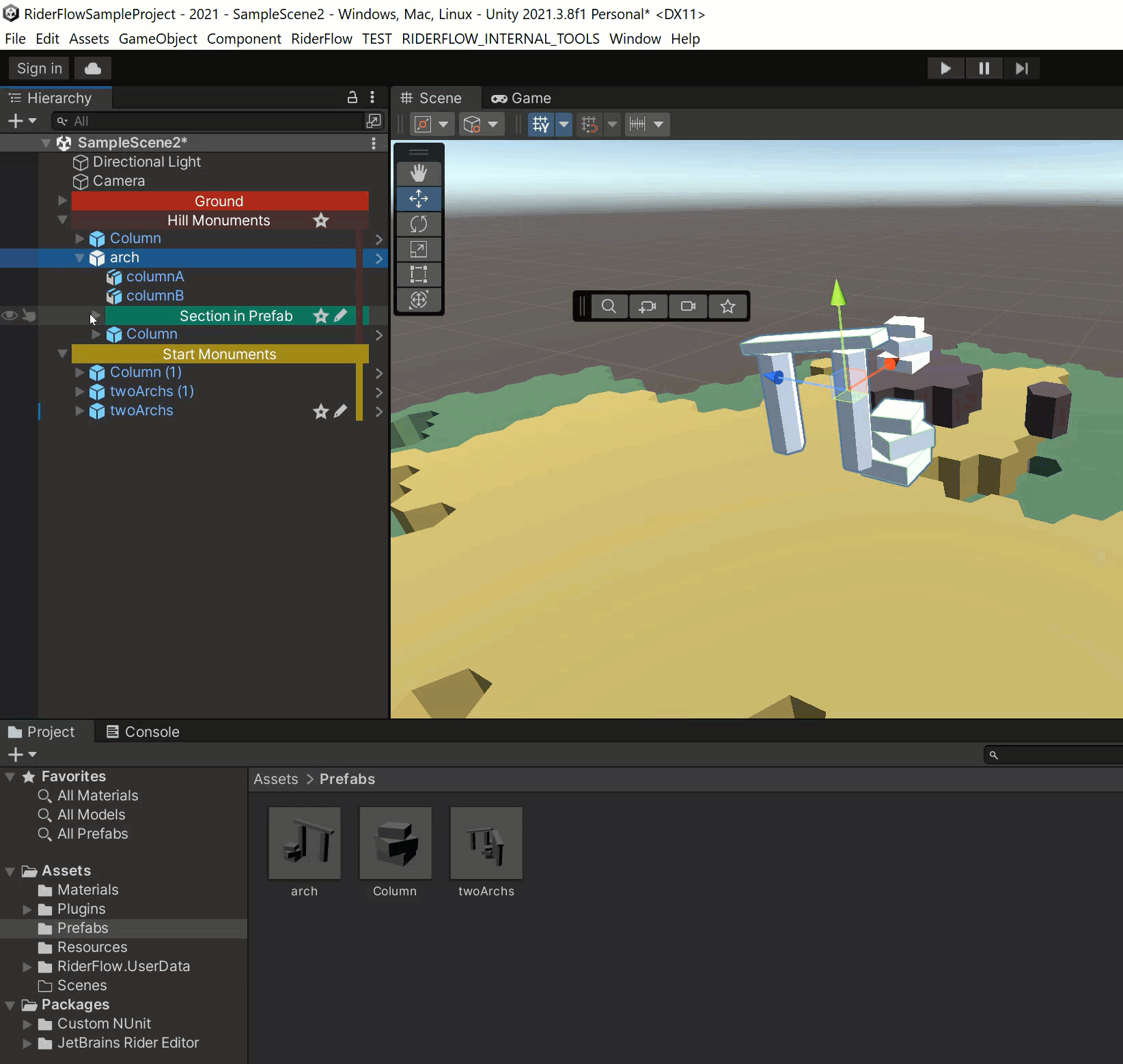 RiderFlow comes with a smart code editor. The new version has several valuable fixes for it:

Your RiderFlow team
JetBrains
The Drive to Develop

Good news everyone! We invite you to join JetBrains .NET Days + GameDev Day Online 2022, two virtual events taking place Tuesday to Thursday, October 25–27, 2022. Let us know if you can make it! COUNT ME IN! Once a year, we invite community speakers to cover topics they are passionate about. The topics include C#, F#, ASP.NET, Blazor, REST, GraphQL, gRPC, stories about contributing to open-source packages, and building microservices. On top of that, we’ll discuss algorithm performance and background tasks in .NET. In addition to two days full of .NET-related content, this year we also