While ReSharper C++ 2018.1 introduced two major new features, debug step filters and includes analyzer, ReSharper C++ 2018.2 is focused on improving its understanding of the C++ language. The biggest highlight is its long-awaited support for C++/CLI. In addition, many important features from C++17 and even the upcoming C++20 have been implemented. Code analysis is enhanced with spell-checking inspections powered by the newly bundled ReSpeller plugin, as well as formatting inspections to help you maintain a consistent code style. 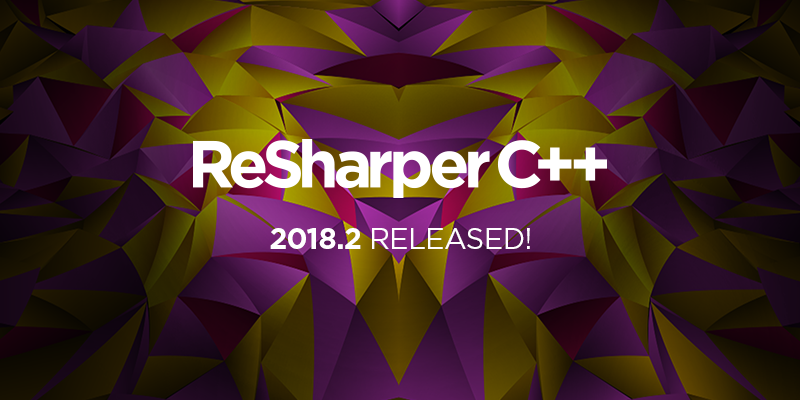 C++/CLI is a set of C++ language extensions by Microsoft designed for easy interoperability between managed and native code. With extensive support for both managed languages and C++, it is only natural for ReSharper to offer help with writing code in C++/CLI too.

Generics, value and ref classes, handles, tracking references, and interfaces are just some of the new language constructs in C++/CLI introduced to support managed semantics. With so many syntactic additions and peculiar changes to the C++ language, handling C++/CLI is no easy task. But now the wait is over — ReSharper C++ 2018.2 makes its C++/CLI support public, with many major features (including code inspections, typing assistance, formatting, and code completion) updated to support this language dialect. 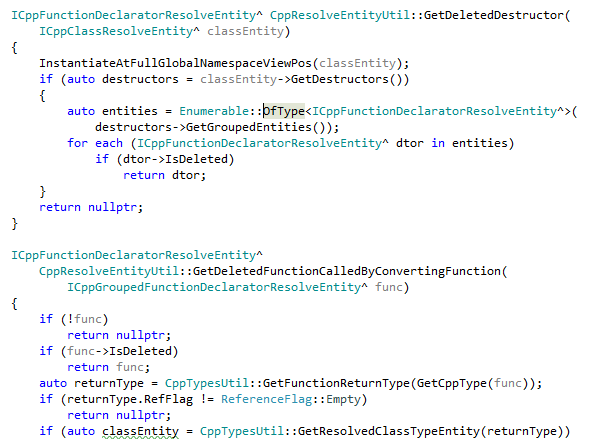 Please remember that this section is named “Initial support” for a reason, and our work on C++/CLI is by no means done. To name just a few limitations: #using directives are not supported, auto-import does not work for CLR classes, and class hierarchy navigation features have limited functionality. While Find Usages and Go To Declaration will work between C++/CLI and C#, refactorings like Rename cannot cross the language barrier yet. The entire list of active issues is available in YouTrack.

C++/CLI is a unique beast. It is used mostly in enterprise projects and in-house codebases, so the number of open source projects that rely on it is very small. This means that we do not have a significant number of available projects to test on. As we move to expand our coverage, we would love to hear your feedback on what is missing and what you feel we should concentrate on.

Another area that we have been putting a lot of effort into is our ongoing work on C++17 support. ReSharper C++ 2018.2 adds understanding of the following new features:

With the progress done over the course of the previous releases (see our updates about C++17 support in 2017.1, 2017.2, and 2017.3), these changes mean that most of the major C++17 features are now supported by ReSharper C++. The biggest gaps that we are going to focus on next are limited support for evaluation of constexpr functions (RSCPP-18417), hexadecimal floating point literals (RSCPP-20364), and noexcept as a part of the function type (RSCPP-20285).

While it’s too early to say for sure which changes are going to make it into C++20, the new standard is already shaping up and its features are becoming available in major compilers. Keeping up with the evolution of the language, ReSharper C++ now supports several features from the upcoming standard:

ReSharper C++ 2018.2 provides spell-checking functionality out of the box, thanks to the newly bundled ReSpeller extension which has also been updated to support the C++ language. Just like with code analysis, ReSpeller scans for spelling mistakes and typos in identifiers, comments, and string literals, and provides quick-fixes to resolve these problems.

When you encounter a spelling mistake, you can invoke the Alt+Enter menu and ReSpeller will provide two options to fix the mistake:

Code understanding is what really makes spell-checking stand out in ReSharper C++ compared to other Visual Studio extensions. If ReSpeller encounters a mistake in an identifier name, it will only be reported at the declaration point. Documentation comments are handled in a special way too, so that Doxygen commands are skipped. Furthermore, the Environment | ReSpeller options page allows you to make ReSpeller skip locals, overriding member function, or class members with specific accessibility. 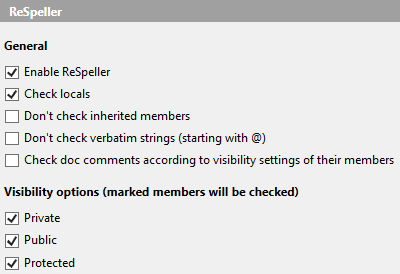 By default, the spell-checker comes with a built-in dictionary for American English, so do not be surprised if ReSpeller complains about “colour” or “behaviour”. Dictionaries for other languages can be easily added too, since ReSharper C++ uses the standard hunspell dictionary format. For instructions on adding a new dictionary and more info about ReSpeller, see Integrated spell checking with ReSpeller in ReSharper and Rider. 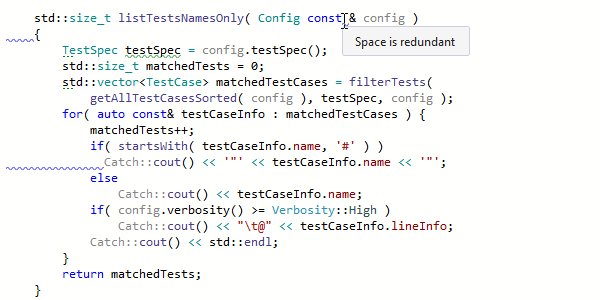 By default, formatting inspections are disabled so as not to bother anyone who doesn’t care about formatting during typing. Go to ReSharper | Options | Code Inspection | Inspection Severity | C++ | Formatting to see all the available inspections and select severity levels for those you wish to be notified of. 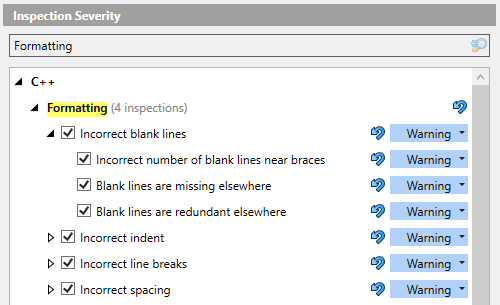 ReSharper C++ is coming to CppCon 2018, the premier C++ conference! Please stop by the JetBrains booth to have a chat about our products and grab some cool swag, and consider attending one of the many talks presented by our colleagues:

We’ll also run a Tool Time lab on Tuesday, September 25. We are looking forward to seeing you there!

As usual, please share your feedback with us and report issues either in the issue tracker or on the support forum.