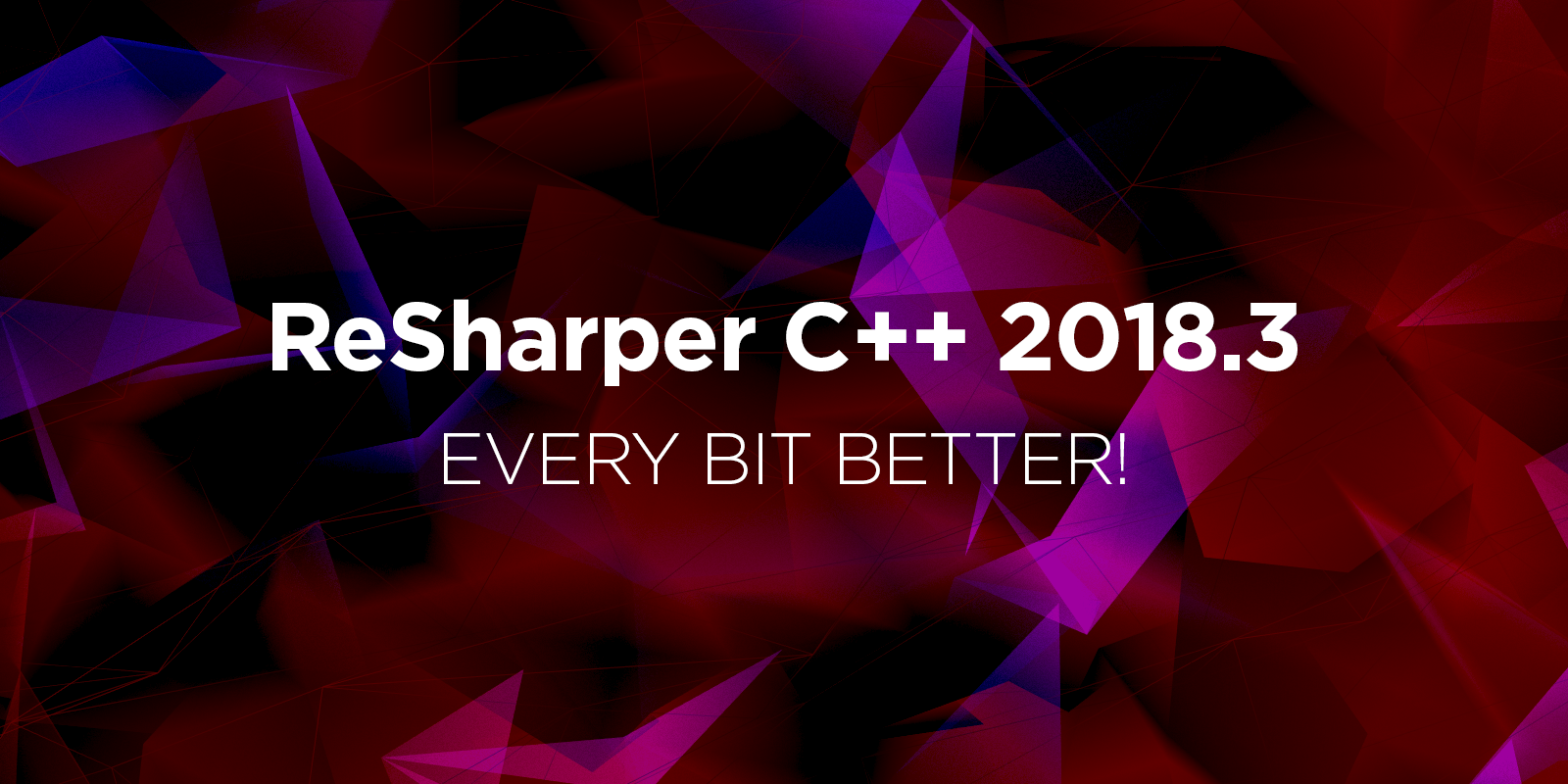 Let’s dive into the details:

Get the fresh build on our site and evaluate new features and enhancements completely free for 30 days:

In this release cycle, we dedicated a lot of time to making ReSharper C++ perform faster:

All these changes helped make the editor much more responsive. Try it now and share your impressions with us! 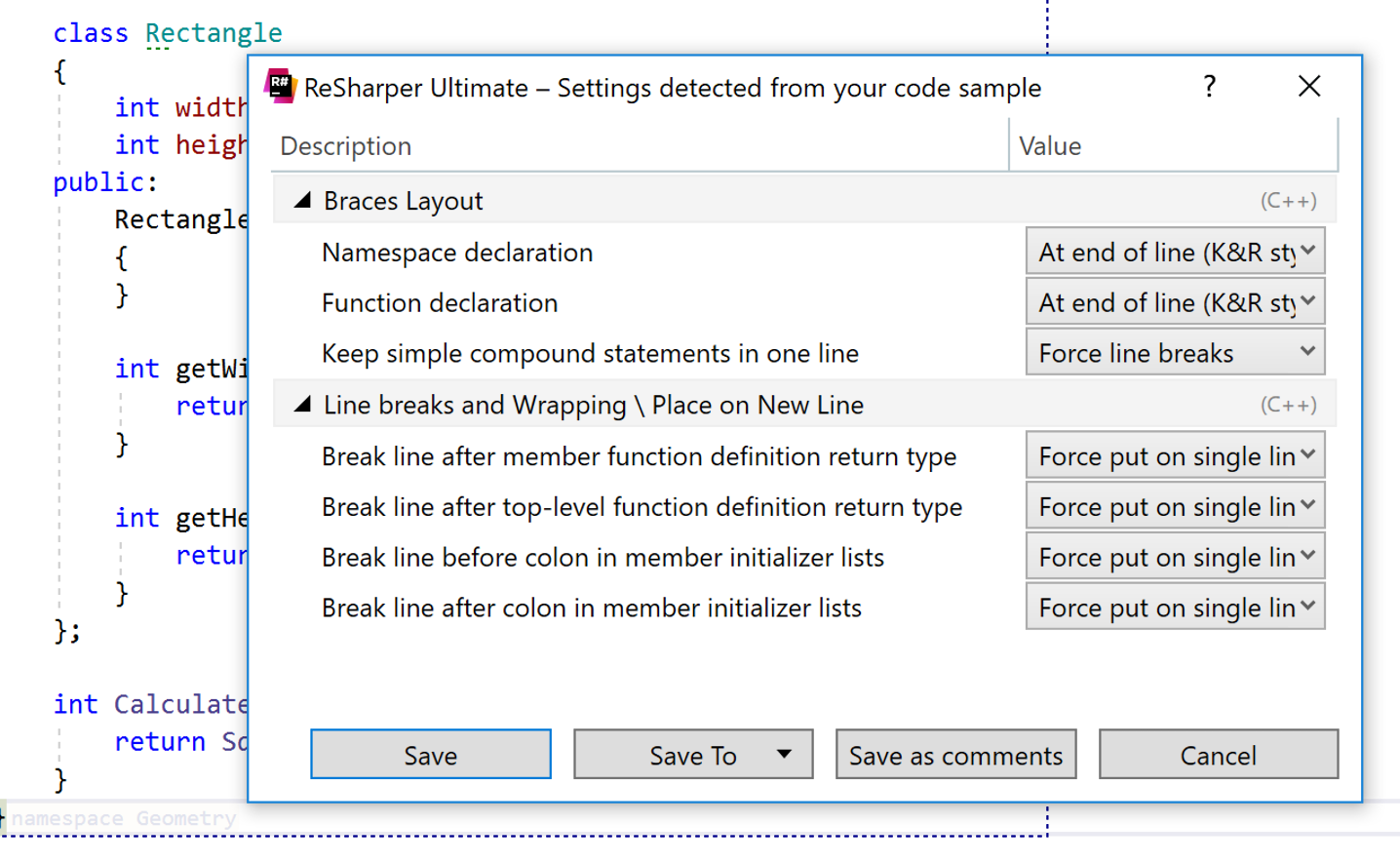 After you review the result, you can save to use globally or in the current file only (if you click Save as comments).

Unlike ReSharper for C#, ReSharper C++ can’t auto-detect C++ naming schemes, but v2018.3 has added predefined C++ naming styles. You can find them under ReSharper Options | Code Editing | C++ | Naming Style, in the Reset to Scheme dropdown. The options are: STL, Google, LLVM, CamelCase, or Microsoft:

Get a grasp on the code with ease

ReSharper C++ understands your C++ code and gives you hints and useful tips across different areas. In v2018.3, we’ve improved quite a few of them. 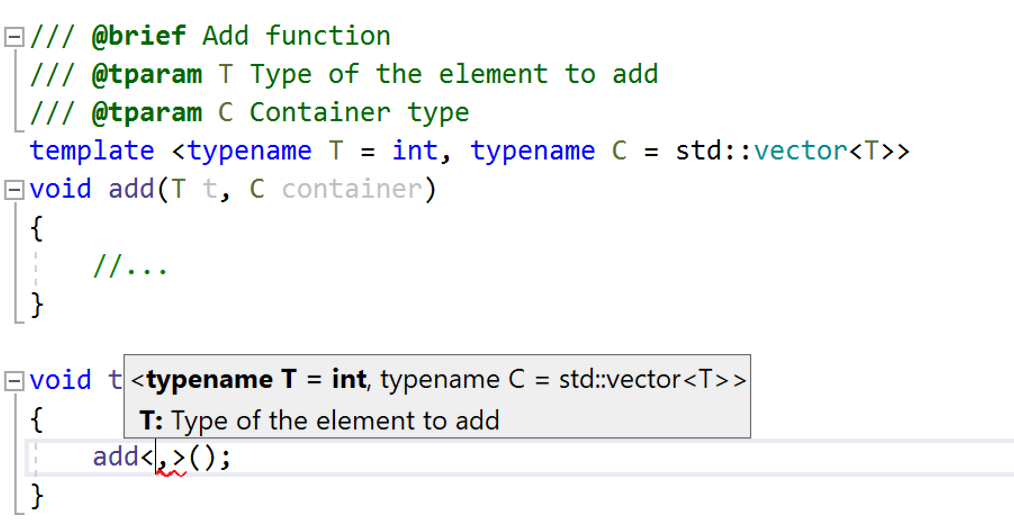 Besides that, default template arguments are also used to provide code completion in the dependent code:

C++ name hints are placed in the editor for function parameters, aggregate initialization, namespace names and macro calls, and they are really helpful to find your way through long (and sometimes nested) lists of parameters, namespaces, etc.

By the way, talking about the name hints at the end of namespace definitions, a neat Clang-Tidy quick-fix can generate a closing comment for you: 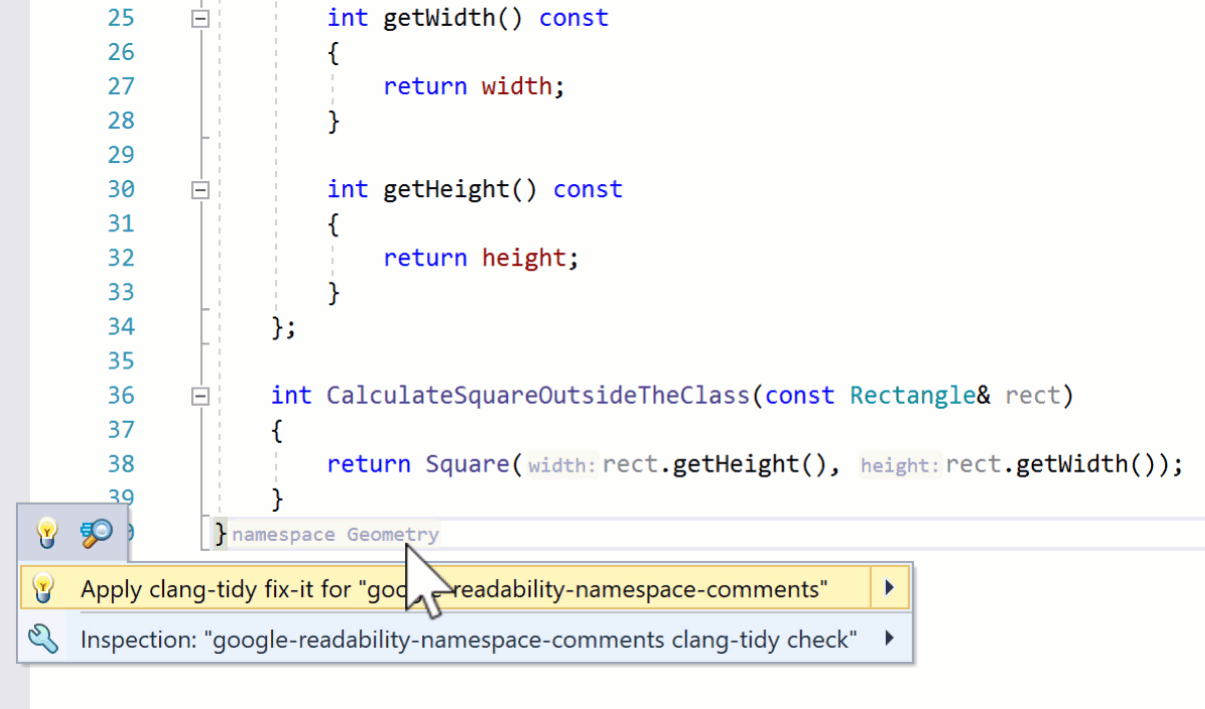 When overload resolution fails in C++, you often get error messages that don’t tell you the exact cause of the problem. The ‘Substitution failed’ error is of little help unless additional details are provided, such as failed enable_if conditions, ill-formed expressions inside decltype, or absent inner types. ReSharper C++ 2018.3 now provides a more specific description of the cause, identifying the exact requirements that aren’t satisfied. Learn more in this detailed blog post.

Refactorings are now even more reliable than before. For example, when you refactor members of an anonymous namespace, they are considered unique to their containing file, so the same names in different files do not clash.

When calling up the Change Signature refactoring, you can now choose to make a function constexpr, const, or noexcept, as well as change the ref-qualifiers: 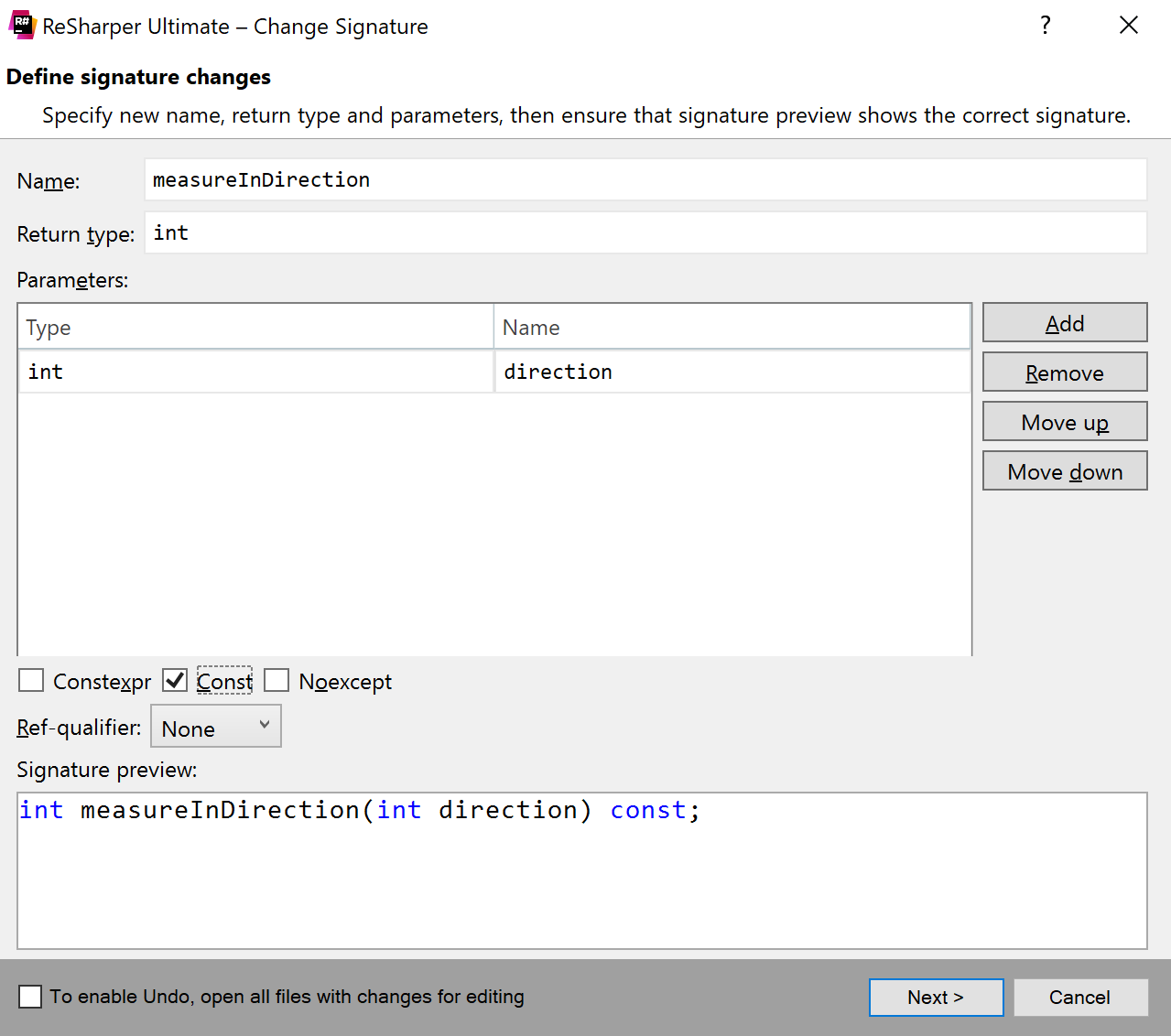 To help you quickly make minor changes to your code and improve it, ReSharper C++ provides a set of automatic code transformations called context actions. In v2018.3, the set was expanded with a few very useful actions:

Let’s take a closer look on one particular context action from the list above – generating a function to convert an enum to a string. Printing enum options and making sure you cover all the options might be a non-trivial task. Often, developers come with some macro-based approach to get a generic solution. But what if you can simply generate the required function? In ReSharper C++ 2018.3 you can do that! 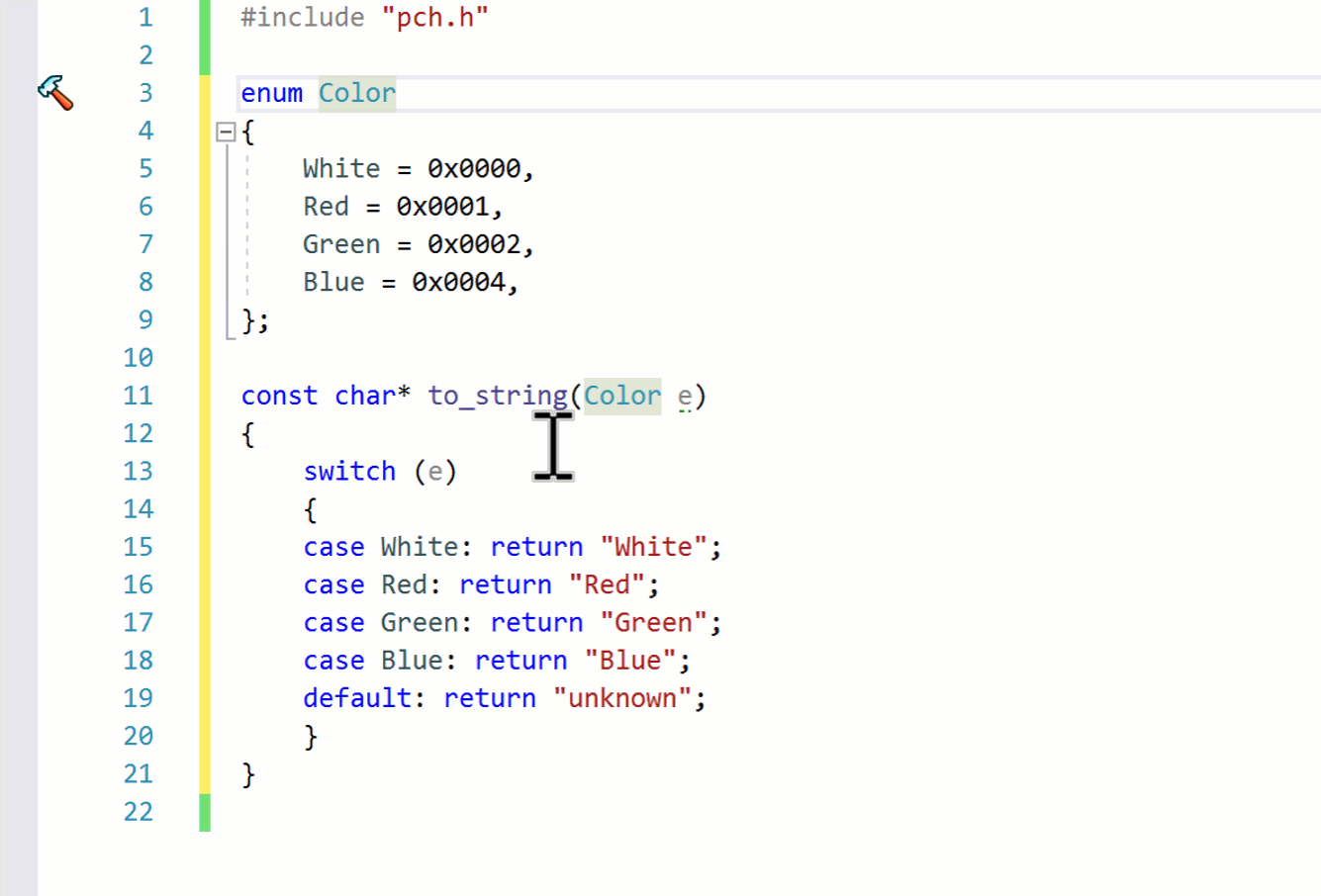 The enum_to_string live template used in this code generation is fully customizable: go to ReSharper | Tools | Templates Explorer and find this template in the C++ scope. For example, you can change the live template to generate a stream output operator for an enum: 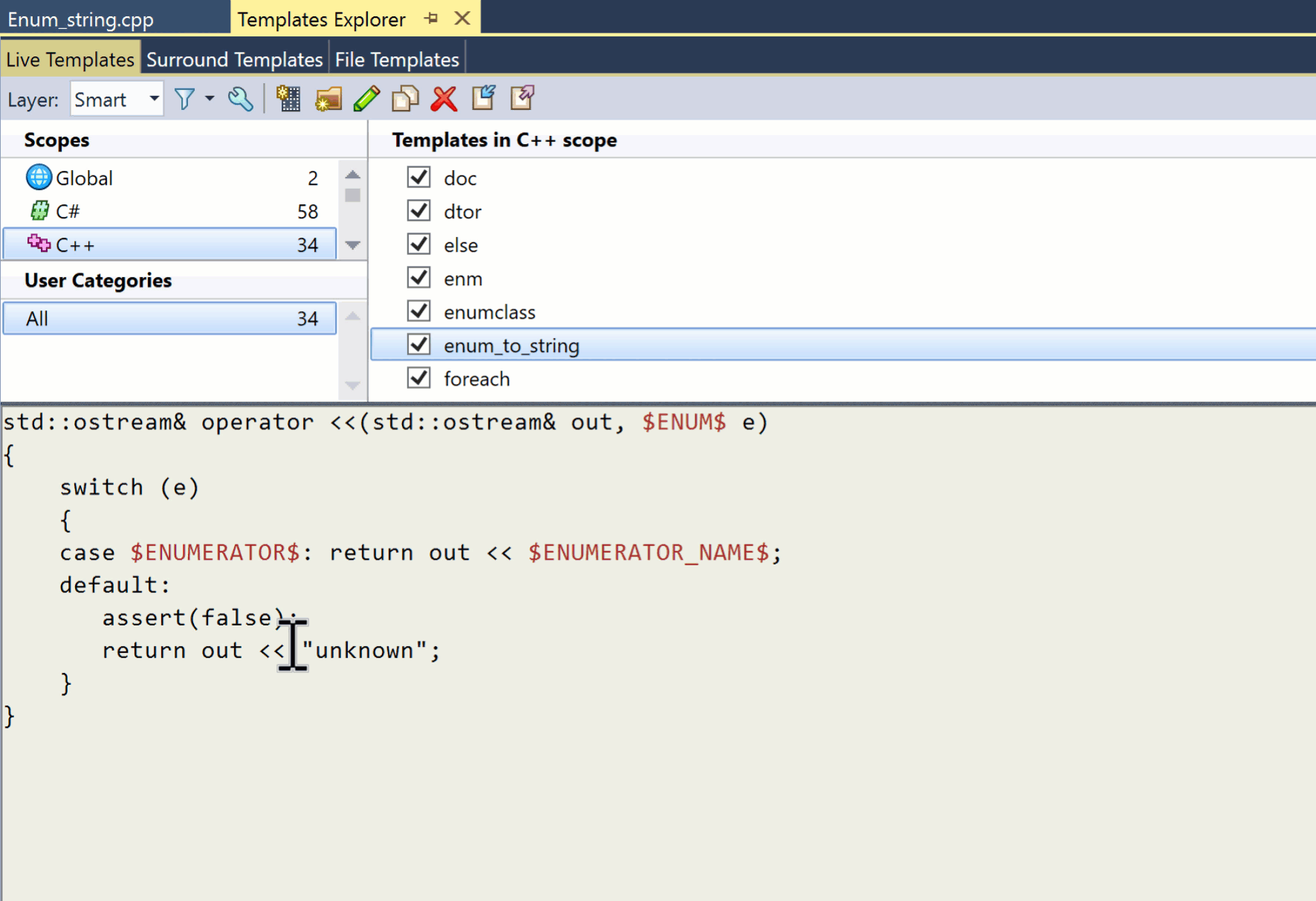 ReSharper C++ 2018.3 has added many new inspections and quick-fixes. For example, there are new quick-fixes to add a functional-style cast, initialize all uninitialized members/bases, and mark class definition as final.

Upgrading the Clang-tidy integration to use Clang 7 has additionally introduced 50+ new C++ checks.

We’ve tuned Go to declaration to provide better results in many situations. On a lambda call, it now navigates to the lambda body; it works on non-dependent decltype specifiers, and even works during the initial project indexing. Go to symbol is also available during indexing. 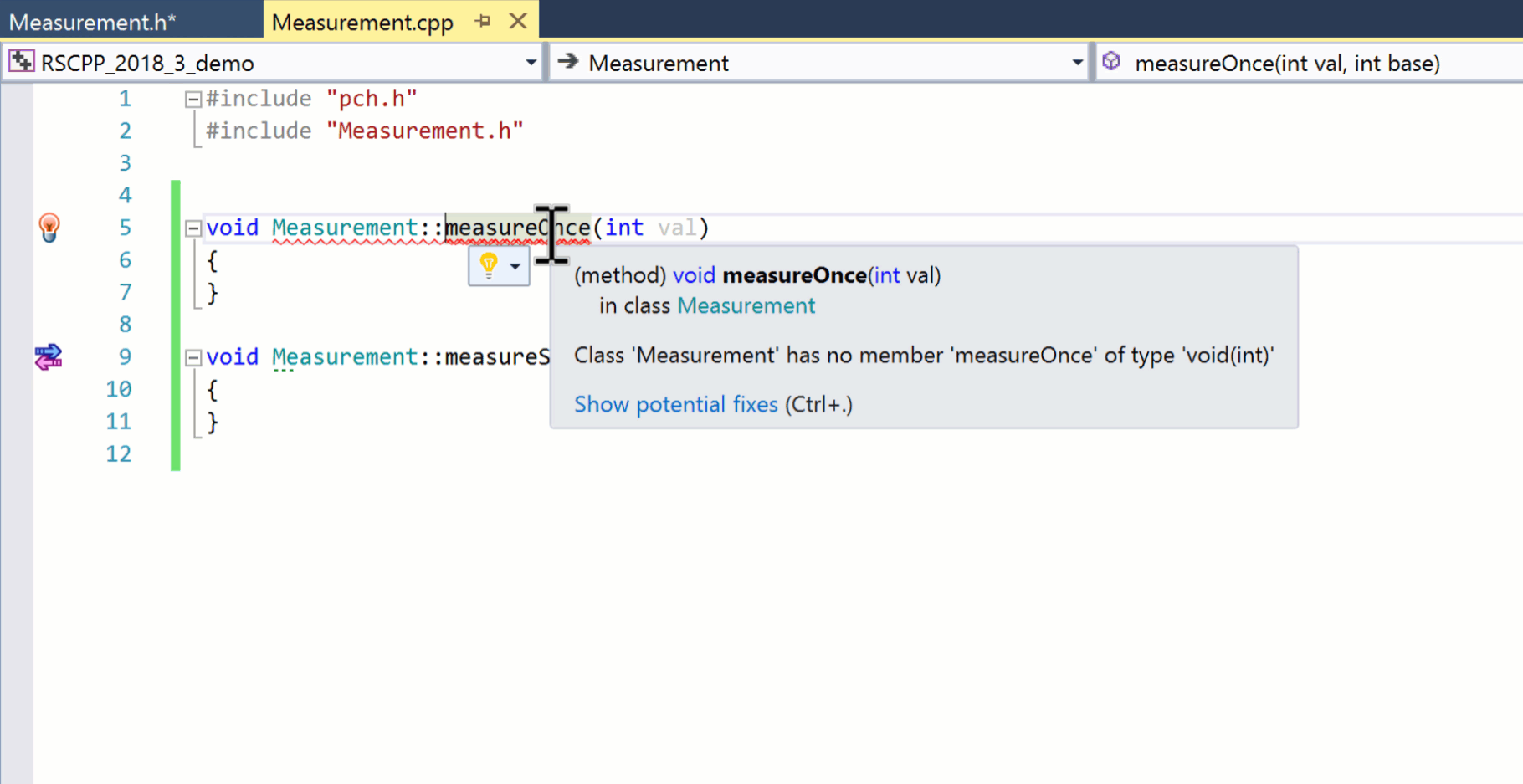 In IntelliJ-based IDEs, you can use Ctrl+Click on a declaration to search for usages. Many users find this behavior quite handy, so we’ve added an option in ReSharper and ReSharper C++ to help you configure the behavior you prefer: 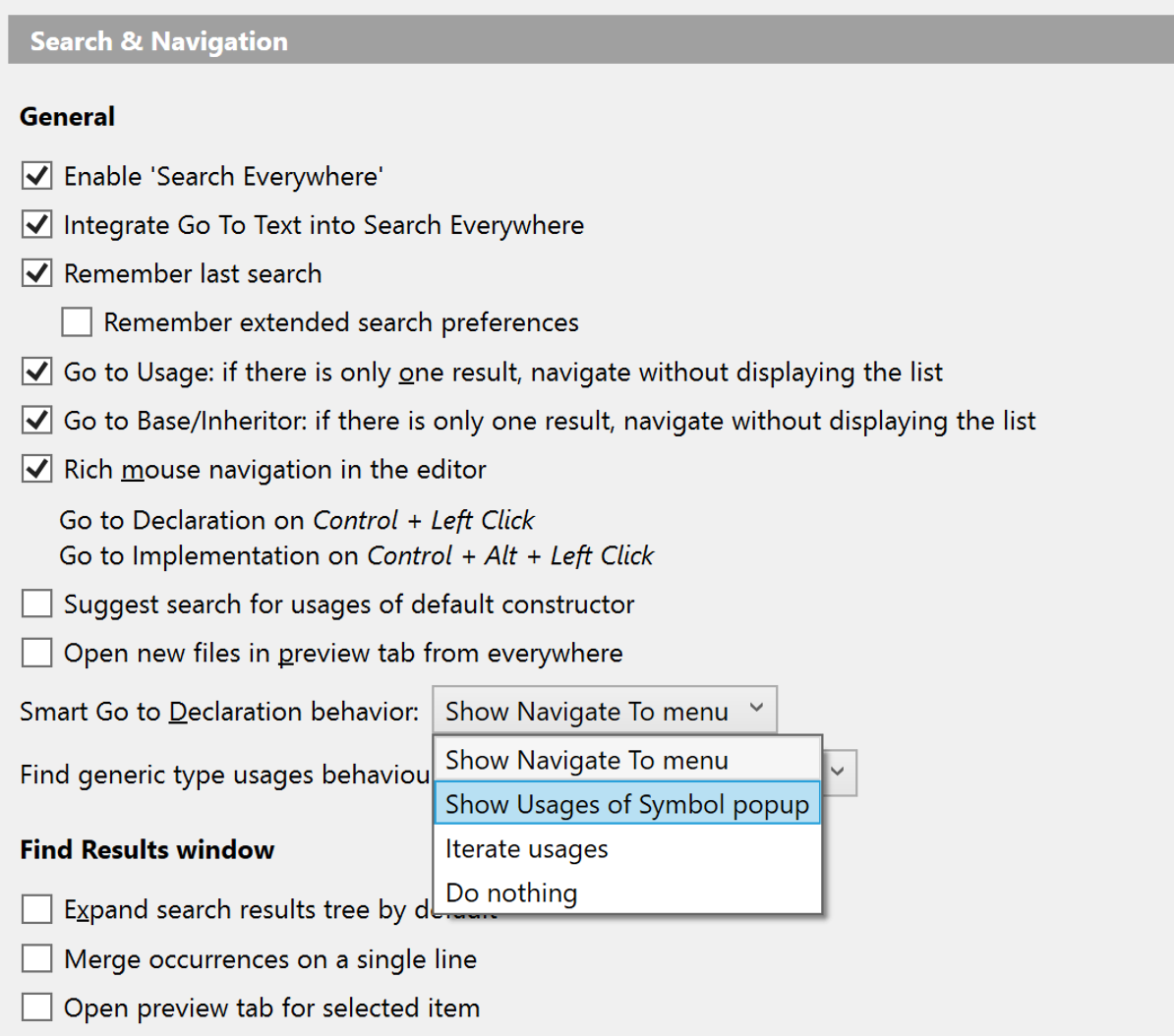 Catch2, a unit testing framework for C++, added support for type parameterized test cases in its recent 2.5 version. The idea is that it behaves the same way as a TEST_CASE macro, but tests are run for every type or type combination. The corresponding TEMPLATE_TEST_CASE macros are now supported by ReSharper C++:

Support for C++/CLI, which originally appeared in ReSharper C++ 2018.2, has been greatly improved in this release. A whole new set of code generation abilities is available for C++/CLI code, including these:

Other improvements for C++/CLI code include code completion after objects of generic types, additional filters in Search Everywhere dialog for events and properties, correct handling of inheritance in C++/CLI, and more.

If you work on Unreal Engine projects, you can now start typing or navigating through your project seconds after you open it! To make this possible, we postponed engine indexing, which now starts in the background after the non-engine code is parsed.

Another notable change is improved support for Unreal Engine reflection macros such as UCLASS, USTRUCT, UENUM, and so on. They are used to emulate reflection, which is missing from the C++ language. You no longer have to build your Unreal Engine project to resolve these macros correctly!

That’s it! Give ReSharper C++ 2018.3 a try and share your feedback with us in the comments below, in our tracker, or on the support forum. We’re waiting to hear from you!