doctest is a relatively new C++ testing framework but is by far the fastest both in terms of compile times (by orders of magnitude) and runtime compared to other feature-rich alternatives. It was released in 2016 and has been picking up in popularity ever since.

A complete example with a self-registering test that compiles to an executable looks like this:

There is no need to link to anything – the library is just a single header which depends only on the C++ standard library. The output from that program is the following:

A list of some of the important features can be summarized as follows:

So far doctest sounds like just another framework with some set of features. What truly sets it apart is the ability to use it alongside your production code. This might seem strange at first, but writing your tests right next to the code they are testing is an actual pattern in other languages such as Rust, D, Nim, Python, etc. – their unit testing modules let you do exactly that.

But why is doctest the most suitable C++ framework for this? A few key reasons:

The idea is that you shouldn’t even notice if there are tests in the production code – the compile time penalty is negligible and there aren’t any traces of the testing framework (no warnings, no namespace pollution, and macros and command line options can be prefixed). The framework can still be used like any other even if the idea of writing tests in the production code doesn’t appeal to you. Yet, this is the biggest power of the framework and nothing else comes even close to being so practical in achieving this. Think of the improved workflow:

Having tests next to your production code requires a few things:

The effect of the DOCTEST_CONFIG_DISABLE identifier when defined globally in the entire project is that the TEST_CASE() macro becomes the following:


There is no instantiation of the anonymous template and there is no test self-registration – the test code will not be present in the final binaries even in Debug. The other effects of this identifier are that asserts within the test case body are turned into no-ops, so even less code is parsed/compiled within these uninstantiated templates, and the test runner is almost entirely removed. Using this identifier is equivalent to not having written any tests – they simply no longer exist.

Here is an example main() function showing how to foster the 3 execution scenarios when tests are present (also showing how defaults and overrides can be set for command line options):


With this setup, the following 3 scenarios are possible:

In the case of programs comprised of multiple binaries (shared objects), the DOCTEST_CONFIG_IMPLEMENTATION_IN_DLL identifier can be used – then only a single binary should provide the test runner implementation. Even plugins that are loaded by the program after it has started will properly register their tests into the registry, which should be separated into a common shared library to which every other binary links against (see this example).

Perhaps you use some custom assert for checking preconditions in the actual code. That assert won’t play nicely within a testing context (failures won’t be handled uniformly). Wouldn’t it be nice if we could just use doctest asserts instead? Turns out that’s possible – this way a project could have a unified way of asserting invariants both in production code and in test scenarios – with the use of a single set of macros and a single point of configuration!

All the user has to do is set a doctest::Context object somewhere as the default for asserts outside of a testing context. Asserts will call std::abort on failure, but this behavior can be overridden by setting an assert handler – with a call to setAssertHandler() on the context. The handler is a function with the following signature: “void handler(const doctest::AssertData&)” and everything important for the assert can be extracted through the AssertData input. It can choose to abort, throw, or even just to log an entry for the failure somewhere – the choice is yours! An example of what that would look like can be seen here. Thankfully, doctest is thread-safe – there is nothing stopping us from using the same set of asserts in any context!

This would be best combined with the use of the binary asserts which are faster for compilation than the normal expression-decomposing ones (less template instantiations). And why not use the DOCTEST_CONFIG_SUPER_FAST_ASSERTS identifier to reach the best possible compile time, turning each assert into a single function call?

Testing is a fundamental aspect of software engineering and the stakes are getting only higher. The world runs entirely on software and the responsibility is placed upon us to develop and enforce standards and procedures in the fastest changing and least mature industry. Using better tools that remove friction in the development process is the best approach towards a more robust and secure future – human nature should never be left out of the equation.

doctest stands out with its ability to write tests in a new and easier way, unlocking the potential for more thorough, up-to-date, and uniform testing. Locality is king not only in CPU caches. There is quite a lot of work left which can be seen in the roadmap – exciting times are ahead of us! If you are curious about the implementation details of the framework, make sure to check out the CppCon presentation!

Update: Since v2020.2 Doctest is also supported in CLion.

When you have doctest.h header included, ReSharper C++ discovers Doctest test cases and suites and adds a corresponding indicator next to each one in the editor. With it you can Run or Debug the test or the whole test suite:

You can even see the status from the last execution (a green mark is added for tests that passed successfully, and a red one for failed tests):

The Unit Test Sessions window will be opened for you to explore the execution progress, results, and output of the tests you run or debug:

To explore all the tests in the entire solution, use the Unit Test Explorer window (Ctrl+Alt+T): 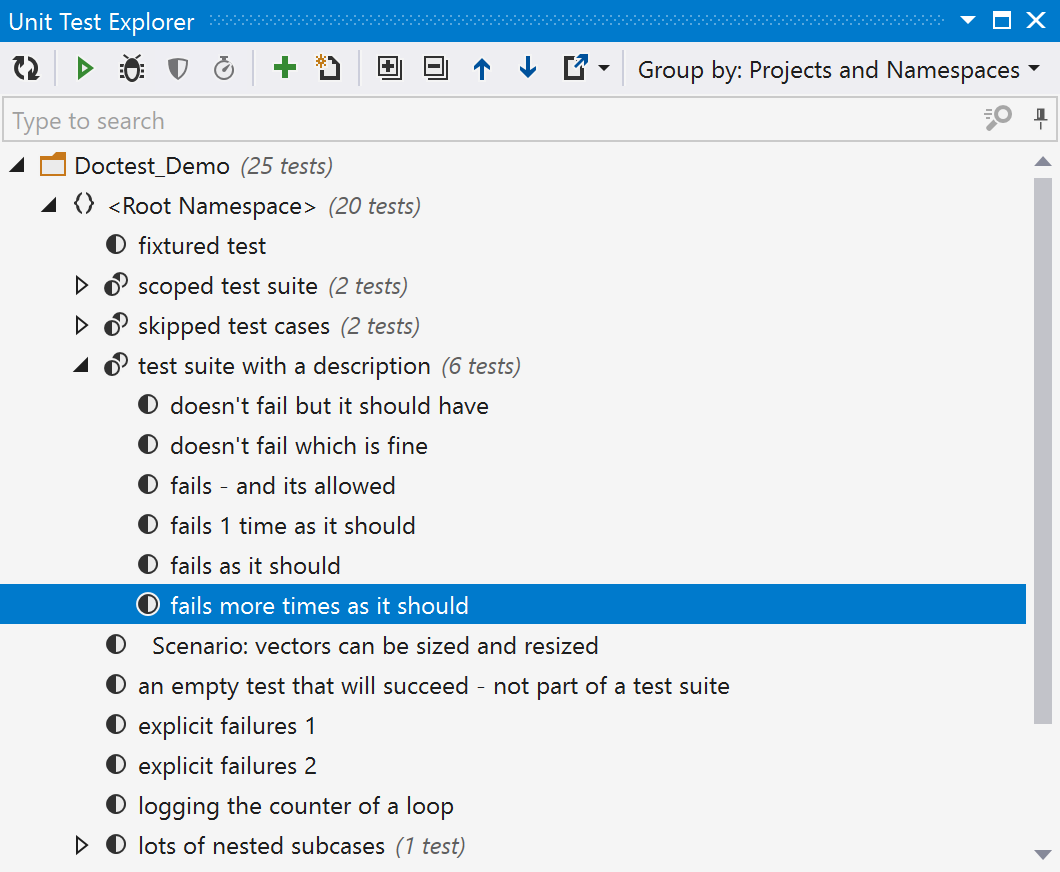 We encourage you to try Doctest along with ReSharper C++ support for it and share your feedback and ideas here in comments!